More About That Bass

Comments on this post are also closed: This is why we can’t have nice things.

Comments on the original “All About That Bass” post are closed: I’ve elected to close those comments after a threat I received on my Facebook author page. The comments have now been removed, but here’s a screencap so you can see why I’m basically 100% done with that post and anyone’s thoughts on it (you’ll have to click on the image to see it full-sized): 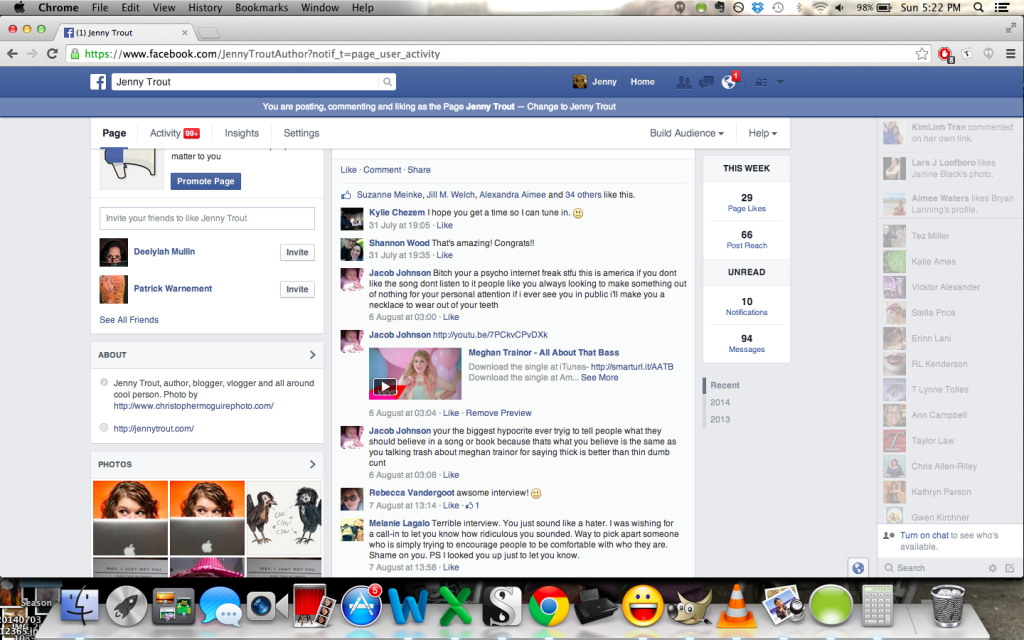 I think it’s fair to say that since comments disagreeing with this story have been so passionate as to sometimes cross into vitriol, and now have escalated into threats, I’m not overreacting in shutting them down. Especially since Facebook has not responded to my concerns with anything other than a form letter to let me know that they don’t answer their email. I guess if I disappear mysteriously, you’ll know what happened to me. In the event of my death by skinning,  send updates to Facebook. They won’t read them or respond to them, because they couldn’t care less.

Clarification on my comments regarding reconstructive surgery after mastectomy: A few people have expressed concerns about this portion of the “I’m Not All About That Bass” post:

Why is it that we don’t view breast implants as body modification on the same scale as piercings or tattoos? I have this crazy feeling that it has something to do with misogyny. Maybe because the primary objective of breast implants is to conform to a specific cultural standard? How is that different from piercing your septum?

I know how it’s different. Men pierce shit, too! Plastic surgery is viewed as a way for women to make themselves more sexually desirable to heterosexual men for as far into their lives as possible. Even reconstructive plastic surgery after breast cancer fulfills this role; when performed for the patient’s personal comfort, it’s still done to uphold the standard that all women must have breasts (well hello, transmisogyny!), which is what’s making that patient uncomfortable in the first place. To be clear, I’m not shaming anyone for having any elective cosmetic surgery for any reason, just defining our world view and cultural expectations of breasts in this context.”

When I first started receiving comments from women who were angry that I’d said all women who have elective breast reconstruction post-mastectomy were doing so to be sexually attractive, once I went back and read it I realized that I had not worded the passage carefully enough. I do not believe that every woman goes into breast reconstruction thinking, “I’m doing this to be sexy again.” I realize that to many women, losing their breasts is traumatic, and they’re choosing reconstruction because they want to feel whole or remove the reminder of what they went through as best they can. Some have made the argument for balance and posture issues in the case of partial mastectomy, which I’m not dismissing at all . The point I was trying to make, before I messed it all up in clumsy wording, is that replacement of any non-essential body part with a new, non-functioning version of that body part for cosmetic reasons is due to our cultural perception of how bodies “should” look.

If we lose a leg, we get a prosthesis so we can walk again. If we lose a hand, we might get a little claw. These are body parts that help our bodies to function, and the function can be more or less restored using these things. But if we lose our nose, we can’t replace it with a new nose that can perform the same function our old one did. When we have reconstructive surgery to return our bodies to a “whole” or “normal” looking state, we’re doing so because of deeply ingrained expectations of what a human being looks like. This is not a judgment against people who elect to have these surgeries. It is an observation and condemnation of cultural biases we do not notice about ourselves and which we have no control over. I’m not saying this should change so that women are unable to receive reconstruction. I’m not wagging a finger at women and saying, “You shouldn’t do this, it makes you vain.” I understand the reasons a woman would have reconstruction. I absolutely would have one, because not having breasts would make me feel, as many women do, like something about me was missing. But I would not be making this decision without any cultural conditioning that tells me that an important piece is missing. I would be making this decision specifically because of that cultural conditioning. If it were my nose, or my ear, or the removal of a facial scar or a mole, I would be doing it for the same reason. There is no possible way to make a decision about how our bodies look that does not have something to do with our expectations for how bodies should look. When people lose fingers, it’s less common to get a prosthetic one for cosmetic reasons. Do you know why? Because we don’t place as much aesthetic value on our fingers as we do our faces and our breasts.

Reiterating: having reconstruction does not make a woman bad, vain, shallow, or stupid, but no woman is making this decision with a mind devoid of awareness of cultural expectations.

If you disagree with this, or you still believe that by saying this I’m pointing fingers at women who choose reconstructive surgery, then I can’t prove further that I’m not, and this is pretty much the last thing I have to say on the subject.

Women who have had breast cancer and who have opted not to have reconstructive surgery share their views on gender expectations and how they played into their decision to forego reconstruction, and you can find their work here:

“Cover Your Boobs Whether You Have Them or Not”
“Life After Mastectomy and The Choice Against Reconstruction”
“I Chose to Live as a Flat Chested Woman”
“The Sum of All My Parts: A Guest Post on Feminism, Breast Cancer Awareness, and More”

None of these women have suggested that no one get reconstructive surgery, nor do they shame the women who decide to. But to overlook their valid points about how they’ve been treated due to their appearance post-mastectomy would be just as bad as making that judgement against the women who choose reconstruction.

If you didn’t agree that the song reinforces misogynistic cultural tropes, have a listen:

Former X-Factor competitors Emblem3 have covered “All About That Bass.” See how you feel about lines like, “Us guys like a little more booty to hold at night,” and “It’s pretty clear she ain’t no size two/but she can shake it shake it/the way she’s supposed to do,” when you’re listening to young men sing them.

Not only do they reinforce they original tropes that made the song so problematic in the first place, they up the ante on the misogyny and body shaming by changing lyrics to say things like, “She’s bringing booty back/go ahead and tell those skinny bitches that/no more joking/never say you’re fat,” and “My father once told me don’t worry about her size.” Are we supposed to applaud this? It’s positive to hear young men trash “skinny bitches,” just so some women can feel better about not fulfilling a standard of beauty they’re longing for? How’s that body positivity working out for you, women who showed up in the comments to tell me I’m the one doing the shaming?

Also, Emblem3, rethink your policy of covering songs by female artists and making them all about you. It makes you look like assholes.

If you liked the message behind “All About That Bass,” try this instead: Many commenters who disagreed with me suggested I was either a frustrated singer/songwriter who couldn’t make it, or that I should write a song and make it better than Meghan Trainors. As I am not a singer/songwriter, I can neither be frustrated by my non-existent failed music career, nor can I write a song, because I lack the necessary skills and education needed to do so. However, I can recommend some body positive songs that should make you feel as good, if not better than, what you’re hearing in “All About That Bass.”

I wanted to make this list longer, but it seems like it’s impossible for a woman to write a song about accepting our bodies without relying on the validation of the male gaze.

And now, I’m done talking about this song. When I wrote that piece, I had no idea that I would receive more outright hate mail in a few weeks than I did when I tore apart Fifty Shades of Grey over the course of two years, or when I wrote about Jennifer Lawrence and it wasn’t to fall all over myself loving how she falls all over. Congratulations, Meghan Trainor stans. You’re officially 100,000 times more frightening and unbalanced than 50 Shades readers and JLaw fans combined. That’s really, really saying something.