I don’t generally get involved in comments here on the blog. I read some of them, but over the years I’ve sort of begun to think of the comment section as a place where you guys can talk to each other about what I wrote. Sometimes, I wade in, other times I think, “You know, I’m going to mind my own business today.”

That’s why when I saw comments pop up on a five-year-old post today, I kind of laughed and didn’t look into them. It’s a post that had an argument going on in the comments that I guess started with someone feeling another commenter was too bitchy and critical (but not me, which is astounding) and every year, another reply or something would show up on that post or in the thread. And again, if people are like, “Well, you’re being a bitch!” “No, Jenny is a bitch!” I feel like maybe they don’t necessarily want me to be involved in that conversation? So, I never really kept up on it.

Today, Tez, my amazing comment moderator (who also caught Lani Sarem up to shenanigans on this here blog), contacted me to tell me that something weird was up. The new comments on that five-year-old post? Were all from the same ISP address, but using names of people who had been arguing in the thread to make it appear as though they retracted their earlier comments.

I can’t believe I even need to say this, but it is never acceptable to use the names of other commenters so that you can leave comments that appear to be from them in agreement with you: 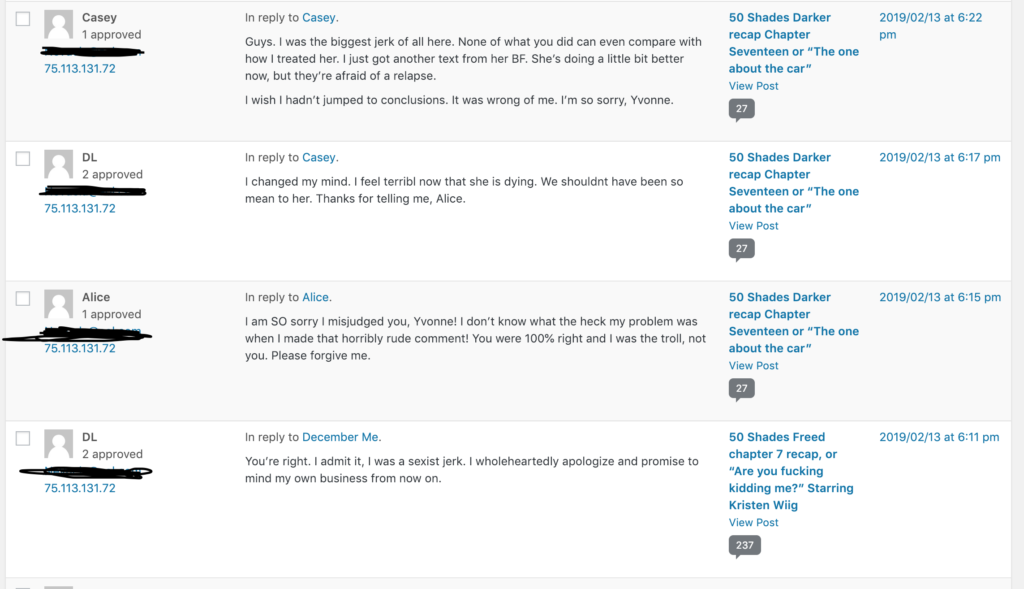 These are not the words of the people who left the original comments. The names are the same, but the ISPs and redacted email addresses all match and belong to another commenter who decided to wade into a five-year-old argument just to make it appear as though people were confessing to being sexist trolls and begging for forgiveness from the person they were originally arguing with. Perhaps most upsetting are the comments that read:

I feel terribl now that she is dying. We shouldnt have been so mean to her.

Guys. I was the biggest jerk of all here. None of what you did can even compare with how I treated her. I just got another text from her BF. She’s doing a little better now, but they’re afraid of a relapse.

There was no mention anywhere in these threads or anywhere else about anyone being near death or relapse, but this person wrote it as some kind of weird comment fanfiction, pretending to be other people begging for the forgiveness of a commenter they got into a scrape with five years ago?

What the hell were you thinking, person who did this? What on Earth made you think this would ever be okay? Do you realize how creepy your behavior is? Pretending to be someone else so you can apologize to another commenter on someone else’s behalf and trying to stir up sympathy with vague threats of suicide or O.D.? All so you can win a five-year-old argument by pretending to be other people responding to you?

What the fuck is your problem?!

At present, all of this person’s comments have been removed, both under the fake names and the one they had been using regularly to comment on posts. Their ISP has been blocked and they are no longer welcome to comment on this site.

Again, I can’t believe I have to say this but this kind of behavior isn’t okay. It’s weird. It’s ghoulish. And it appears freakishly obsessive, considering the age of the original posts. Tez does pay attention to these things, she does bring it to me when weird shit happens, and people do get blocked.

I guess I should have clearly stated this “don’t talk to yourself and insinuate that commenters were so mean to someone five years ago that it’s killing her now” rule a long time ago. But here the fuck we are.

FADE IN
INTERIOR – BEDROOM – DAY. MR. JEN and JENNY are sitting in bed, looking at photos from Jenny’s Catholic grandmother’s house at Christmas.

JENNY
The first time you went to my grandma’s house, did you think it was one of those really religious houses?

Mr. Jen stares at Jenny with a mixture of incredulity and outrage.

JENNY
Well, I don’t know! I grew up in that culture. I don’t know how much religious stuff a house should have. Like, when you walk into her house, is that your first–

JENNY
And you go, this is one of those religious houses?

MR. JEN
Remember when we counted all the Jesuses on the first floor of your grandma’s house? How many were there?

MR. JEN
Fifty-two! There are fifty-two Jesuses on that floor alone! And that’s just Jesus! There’s all kinds of other religious stuff!

JENNY
So, how many Jesuses is too many, then?

JENNY
Wait, do you mean having two Jesuses is having too many Jesuses, or my grandma has two too many?

JENNY
Like, is fifty the limit and she’s two over?

Mr. Jen massages his forehead with both hands, humbled in defeat.