STATE OF THE TROUT: Why have I been so busy edition

I’ve been a little busy lately. I wanted to get another set of Jealous Haters merch out for yous all, but I didn’t like the way one of the proofs turned out so they’re getting a re-design and release in July. It will be worth the wait, Jealous Disasters and Handbooks for Haters. I haven’t forgotten yous all. But here’s the stuff I’ve been busy with. 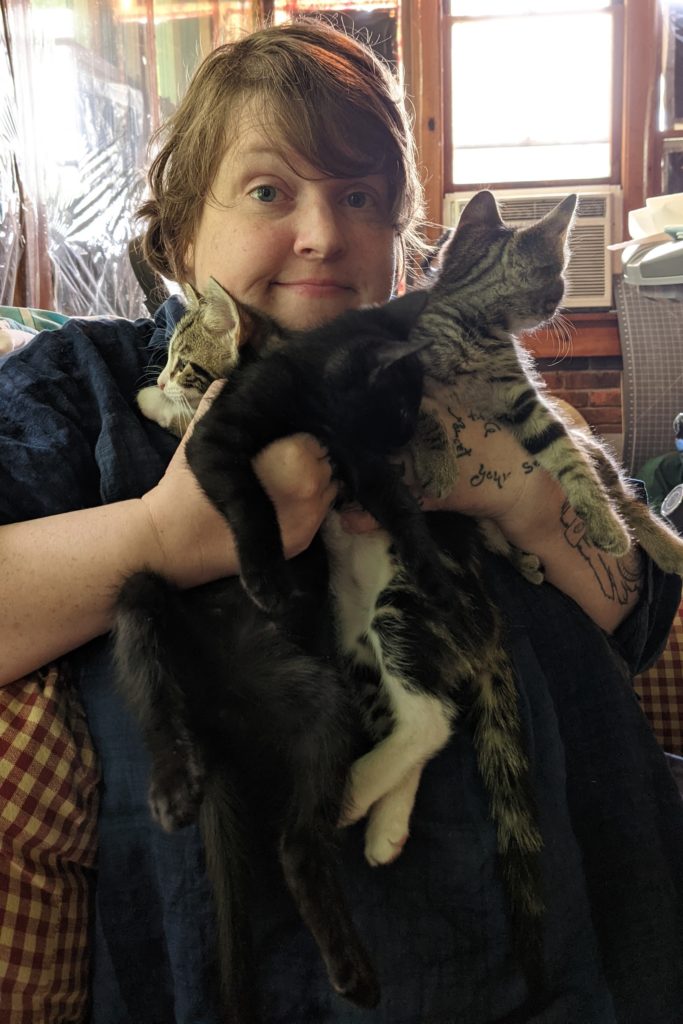 On the condition that my brother and sister get their cat spayed, I agreed to foster these beasts. Which quickly turned into, “I will keep two of these.” From L-R, that’s Frankenstein, Dracula, and Ed. Obviously, Frankenstein and Dracula are mine. Once Ed is old enough (they’re eight weeks old now, we got them at six weeks because Momma cat peaced out on the whole parenting thing), he’ll live with Baba. In the meantime, all three of them are here, to the bone-chilling terror of our largest pit bull, who trembles and flees any time we open the porch door because one of them hissed at her once and she has yet to recover. 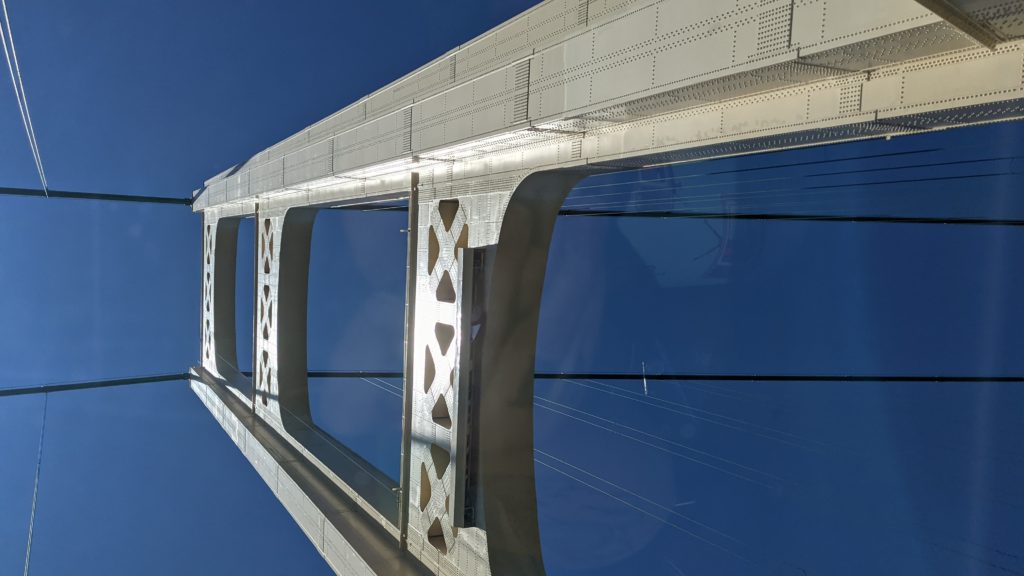 I went on my annual U.P. writing retreat where, unfortunately, I spent most of the time in agonizing pain and missed out on seeing my friend’s new baby. But I did get more writing done than I usually do at home, and I always use that week as a benchmark to figure out how my publishing schedule is gonna go for the rest of the year. I feel like BARRING ANY POTENTIAL BREAKDOWNS CAN I GO ONE GODDAMN YEAR WITHOUT A MENTAL HEALTH CRISIS, I’ll be releasing both Queen of Hell and the rewritten version of In The Blood on Halloween. Because I’m spooky like that.

You ever get a chance to do something you’ve always dreamed about but never had the chance to do? And then you get the chance and you throw literally everything else in your life to one side because this is all that matters until July 9, 2021? Well, that’s what happened to me. I got the chance to write a musical revue. It’s free, it’s outdoors, and it’s with my very favorite theater family, Center Stage in Kalamazoo, MI. If you live in the SW Michigan area and you’d like to see a show on the 9th, 10th, or 11th of July after a year of no theater, you can get ticket info here!

So, that’s what’s been going on lately. Check back this week for a rec/review of a really great series from one of my most favorite authors, Leanna Renee Hieber, and possibly other stuff. I’m not 100% sure that my ass is unkicked yet from the trip.

$ PRIDE $ (and why I don’t think cops belong there)

Am I introducing Pride merch like a god damn conglomerate? You’re 100% right. If Lego can cash in, so can I. Except, when LGBTQA+ creators do it, it’s like when you hand money to the dude in the sleeping bag on the sidewalk instead of the dude ringing the bell to get money to run through the hands of the CEO before making the dude in the sleeping bag sit through a gospel reading to get a bowl of oatmeal and a roll of toilet paper.

Before I shamelessly hawk my wears, let me explain this shit like a fucking recipe blog.

I don’t think cops should be a presence at Pride. Not just because cops routinely raided gay bars and checked people’s genitals and counted how many pieces of “gender appropriate” clothing they were wearing and beat them and outed them and humiliated them etc. until Marsha fucking snapped and chucked that brick, but also because of how the police have weaponized their presence to prevent events and protests from even happening. Cities have tried to use, “but you have to pay for the police to protect you!” as an excuse to withhold permits and contracts from event organizers who couldn’t raise the funds. And “protection” from police at Pride has sometimes meant open harassment and violence against the people paying for their protection in the first place.

Just because marriage equality passed in the United States doesn’t mean LGBTQA+ people are safe and all our problems have been solved. We’re still considered “less-dead” in criminology terms: victims more vulnerable to becoming cold cases due to marginalized status.

The situation is somewhat similar to what happens to Black Lives Matter protests: Pay us to protect you at the protests you organize in remembrance of how we, specifically, have historically victimized you. Oh, and while we’re here, why not let us make you feel incredibly unsafe.

In the United States, there’s a flag that’s become a popular substitute for the traitor (confederate) flag. It’s a version of the American flag in black and white. One stripe is blue, to signify the “thin blue line,” the mythical concept that without the police to brutalize citizens, the workers will undermine the fruits of their labor or something dystopian like that.

In my area, they usually fly just above “Trump 2024” or “Fuck Biden” MAGA flags.

I fucking hate them.

Like, whenever I hear a firetruck, I fantasize that it’s one of those houses.

So, as with many, many things in my life, I was motivated by spite to make a flag for LGBTQA+ Americans who don’t want cops at Pride, based on the bootlicker flag: 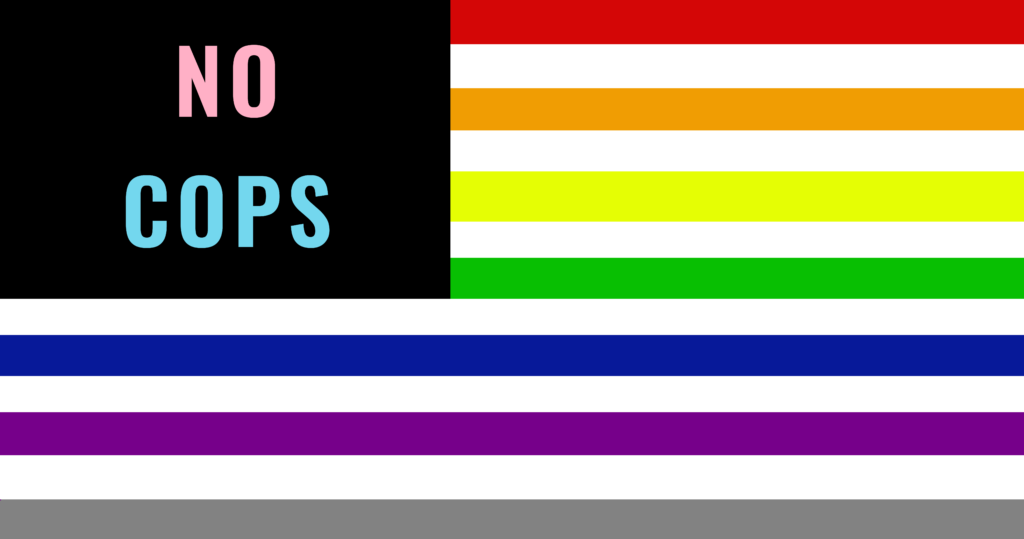 This image file is huge, by the way, so that you can use it on what you want. Put it in your Cricut machine and make stickers and sell ’em on etsy. Make it a real flag, I don’t care. Put it on your FB, print it out and write love letters on it, whatever blows your skirt up. Monetize it. Get that cash, gaybies.

What I’m not cool with would be if someone not a member of the LGBTQA+ community decided to be an ally by making money off it. Or a corporation. That would disappoint me and I would lose respect for that person or entity. But I want it to be available for everyone so I’m not gonna copyright it or anything.

Over at TroutMart, you can find this design, as well as a limited edition, super gayed-out version of our favorite misogynistic insult that will only be available during the month of June.

Anyway, a very merry Pride to you, remember the people who died so you could watch cis straight actors pretend to be them in the biopic.

No Cops At Pride.