#LegionXIII Rome watch-along S01E08, “Caesarion” or “Julius Caesar, you are NOT the father.

Quick rundown of the episode: Humiliated by his side’s loss to Caesar, Brutus returns to Rome, to a mother who seems equal parts relieved by his survival and embarrassed that her kid lost in the war against her ex-boyfriend. But it’s cool, because now that the and his traitor friends have returned to Rome, they can just keep on plotting. Brutus doesn’t want to get involved right now, but I think we all know that’s going to change. Antony overhears them plotting, and warns Cicero that if he acts up, he’ll nail his hands to the senate doors.

Caesar arrives in Egypt, where all the speaking Egyptians are as white as this year’s Oscar nominees, and Pharaoh Ptolemy presents Caesar with Pompey’s head. Caesar isn’t very thankful for the gift, and decides to help Cleopatra overthrow her stupid, spoiled brother. He sends the thirteenth out to find her. She’s out in the desert smoking opium and waiting for her brother to get pissed off enough to kill her. Luckily, Titus Pullo shows up just in time to stop her from being assassinated. Cleopatras’ womb is “between the flood”, so she comes up with a plan to get inseminated any way she possibly can, so that when she inevitably seduces Caesar, she’s already got one in the chamber. Her slave brings her Lucius Vorenus, but he can’t do the job, so it’s down to Titus Pullo to have some tent-shaking, acrobatic sex with her. They smuggle Cleopatra into the palace in a sack, and Caesar wastes no time getting her into the other other, proverbial sack. At the end of the episode, he proudly present “his” baby to his cheering army, while that little shit brick Ptolemy floats face down in some sandy water.

My favorite part of the episode: When, in what can only be described as my perfect romantic evening, Titus Pullo and Cleopatra bounce off the walls of her pavilion like ping-pong balls to the sound of extremely enthusiastic ululation.

My least favorite part of the episode: Every single Egyptian with a speaking part is a white person. Ptolemy, Cleopatra, the guy who was Cassandra’s slave in the Doctor Who episode “A New Earth,” every single one of them is white. There are a lot of black Egyptians in this episode. They’ve all been cast as slaves who have no lines and who just stand behind the talking white people. What the fuck, HBO?

Favorite costume: When Cleopatra returns to the palace all decked out, and her slave’s makeup is AMAZING. 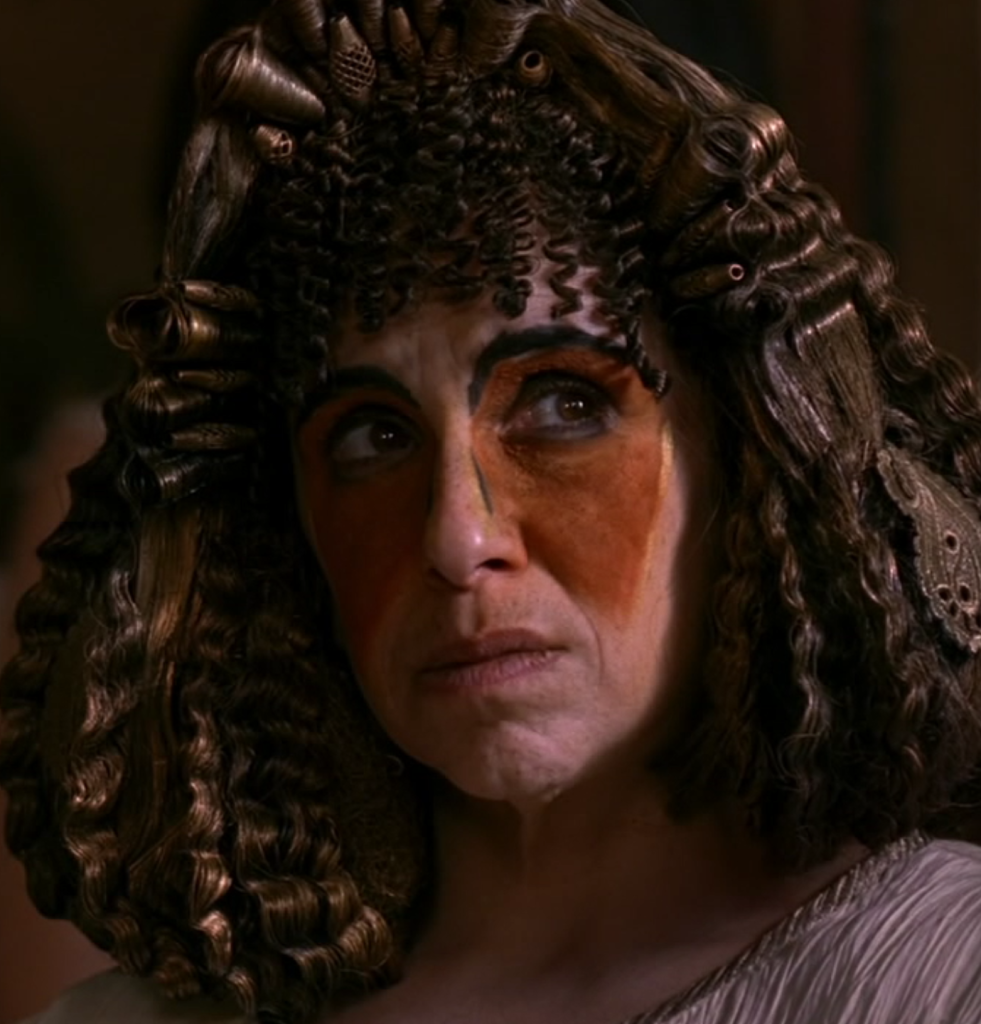 Team Atia or Team Servilia: Doesn’t really apply in this episode, as neither are featured. Servilia has a sex scene with Octavia that’s presented in contrast to Caesar’s scene with Cleopatra, but that’s about it.

Favorite watch-a-long tweet: When Jess was unimpressed with Caesar’s dramatic style of lovemaking.

Full of drama and all that. Gotta get old. Cleo’s like, get on with it so I can convince you the baby’s yours. #LegionXIII

What hairdo or costume would Bronwyn steal? Bron is sucker for comfort, so I’m going to go with Cleopatra’s linen nightgown thing.

Guess Jess’s head canon. Pullo and Vorenus double up on Cleopatra, but end up being more interested in each other.

Now go check out Bronwyn’s and Jess’s posts (Jess’s might be a little late this week due to illness), and join us Monday at 9 PM EST for season one, episode nine, “Utica”. Tweet to #LegionXIII to join us!