For my last post on the subject of Troutcation, I wanted to share with you some travel tips for visiting Secrets St. James or Secrets Wild Orchid.

Which one? So, both Secrets properties in Montego Bay are extremely close together. I snagged this picture off their website so you can see how close they are:

On the left, with the blue roofs, is St. James, and on the right, with the brown roofs, is Wild Orchid. They’re different resorts, but they share pretty much everything. Wild Orchid is closer to the restaurants and nightlife, while St. James is closer to the water sports area and the spa. The main difference I found was that due to its proximity to the shopping, restaurants, and bars, Wild Orchid felt busier, like more of a party atmosphere. Wild Orchid also features lower level “swim-out” rooms for Preferred Club guests, which open directly onto a shared private pool.

St. James felt more removed, definitely quieter than Wild Orchid (especially at night, when people converged on the nightlife area). On the other hand, Mr. Jen and I felt that St. James had the “party pool”, since it seemed a lot of the activities and games happened there. It was also the pool we never went to, because we overheard a really douchey young guy say, “Mr. Hastings! What’s up, brah?” to someone (presumably Mr. Hastings) as we walked past and we decided that we needed to never hear such phrases again.

Mr. Jen and I dubbed the Preferred Club area at St. James the “middle-aged people pool,” because it was quieter, people went there to read books, and nobody was very rowdy or particularly younger. That was our favorite pool.

When should you go? What are you there for? Mr. Jen and I arrived on a Thursday, and it was tranquil and beautiful at night. On Friday, things picked up a little bit, but there were still serene spots to visit. Saturday, all hell broke loose. There was a wedding, two corporate receptions, and a big outdoor party over in the nightlife area. It was the only night we actually heard noise from outside, and that noise was from two competing parties. Now, if we were fun people, this wouldn’t have been an issue, but Mr. Jen and I are not fun. While we weren’t put out or annoyed by these things (because we’re pretty easy going people), we could see how others might be. If you’re going for quiet and relaxation, try arriving on a Sunday afternoon.

Plan your excursions before you leave. People were telling me to do a lot of things before I left on this trip. Oh, you have to go to Ocho Rios to the waterfall because something to do with Cocktail. You should visit such and such historical plantation! Go to where Bob Marley is buried. Take a sailboat cruise to Negril. All of this sounded like a lot of fun, and we didn’t do any of it. Partially, because we were only there for three nights and our single excursion plan feel through. Mostly, though, because we didn’t plan ahead. While Apple Vacations have representatives on-site to help you make your plans, by the time we arrived we were so overwhelmed with choices and indecisive about what to do, we just ended up snorkeling the whole time. Which, you know, snorkeling is cool, but we didn’t see much of the country above water.

Don’t get a first floor room. All the rooms have balconies, so the first floor has patios. Unfortunately, the patios were all very public. There was no barrier (at least, not one substantial enough to recall) between the patios and the lawns, so in some rooms you’d be sitting in your private soak tub within a couple hundred feet of the pool where everyone is hanging out. But my strongest argument against ground floor rooms? 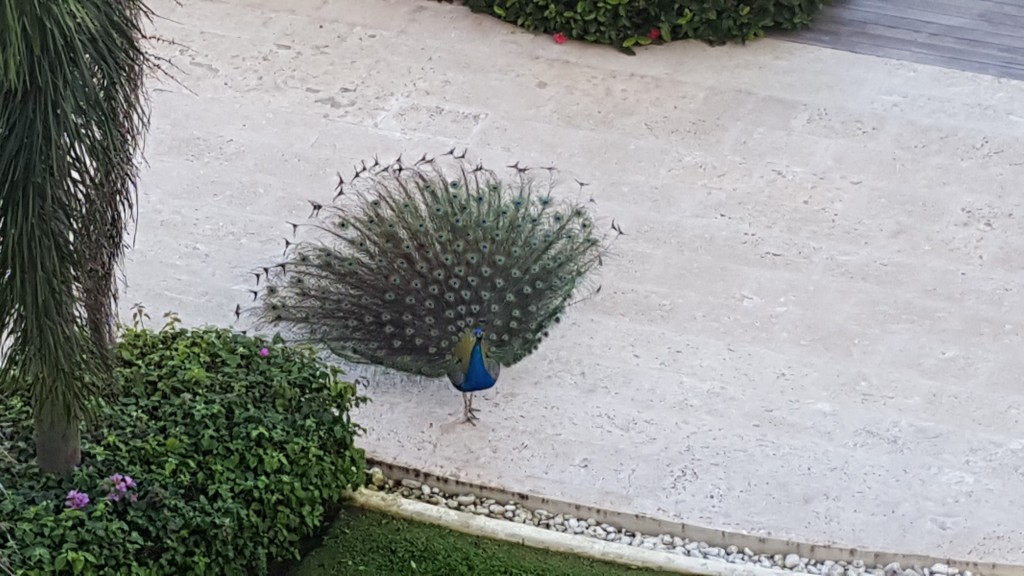 There were peacocks all over the resort. Sure, they’re beautiful and majestic, but do you know what else they are? Dumb as hell and lacking personal boundaries. They’re also aggressive and territorial with each other. Combine all of that, and you have a very high probability of waking to the squawks of a peacock fighting his own reflection in your ground-floor room’s sliding glass door. We saw this happening more than once, and always before nine in the morning.

And most importantly, keep in mind Jamaica’s anti-LGBT culture. Marjorie stopped by the last Troutcation post to give me a heads up on LGBT discrimination/criminalization in Jamaica. This wasn’t something I looked into before going, and I really dropped the ball; I never leave the house, let alone the country, so the idea of checking to see if LGBTQA+ people are more hated in the country of my destination didn’t occur to me. After I spent even a small amount of time researching it last night, I was like, “Oh, shit.” If you’re in a same sex relationship, Jamaica isn’t a safe place. Do not go to there.

However, if you can’t visit Jamaica due to the threat of violence or your conscience prohibits you from visiting,  Secrets also has properties in other, less virulently discriminatory countries, such as Mexico, Costa Rica and Panama. And this is a good reminder to always check with your country of origin on this stuff; if I had been a responsible international traveller and checked with the U.S. State Department, I would have seen their incredibly lengthy section on this.

I also would have known I was supposed to get a Typhoid shot. Whoops.

So, that’s about it from the Troutcation Information Station. Mr. Jen and I are super grateful to Apple Vacations for giving us the opportunity to check out their hassle-free, streamlined travel service. The next time we decide to run away to a tropical destination, Apple will definitely be our go-to travel agency.