Let’s Get Crafty Out Of Desperation!

You know that stereotypical “Yay, my kids are going back to school soon” mom thing? Yeah, that’s not played up for laughs. As the first day of school draws closer and closer for my youngest, her boredom and anticipation have turned to neediness and destruction. Now, with her new backpack stuffed with fresh supplies and new clothes she’s not allowed to wear yet just sitting around, taunting her, I’ve cleaned up messes like clear nail polish poured over our bathroom sink, a whole bottle of acrylic paint spilled across our dining room floor, and a sandwich threaded through our apple-coring/slicing machine. Two of our dogs received very amateur haircuts.

In desperation, I suggested we do some crafts. Now, I’m not the kind of mom who arranges activities for her kids. Nobody entertained me or enriched my life with activities daily when I was growing up; if I ever said I was bored, my grandmother would automatically answer, “Well, I’m so thrilled, I could shit!” But when it gets to the point where activities will divert the focus away from destruction, I’ll do anything. And the things we did actually turned out pretty cool. You might be interested in making some of them, too.

We got Halloween-ish, y’all! 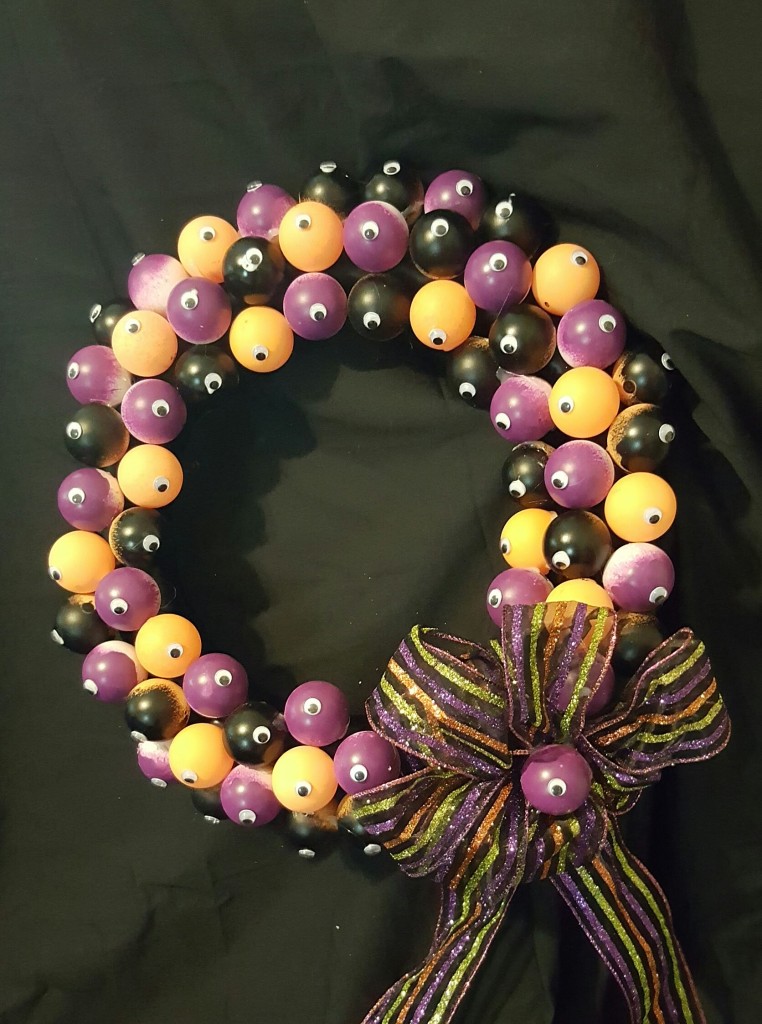 There are a lot of versions of the eyeball wreath floating around online. This is our spin on it. We used spray-on fabric paint on ping pong balls (and used plain old orange ping pong balls we didn’t have to paint, just because we’re lazy), then glued a little googly eye on each one and hot glued them to a styrofoam wreath wrapped in black ribbon. My tip for this one: to paint and affix eyes to the ping pong balls, put big loops of duct tape on a  piece of cardboard and stick the balls to the tape to keep them from rolling away.

We pained these terrecotta flower pots and filled them with florist foam. The moss is glued around the foam. The leaves came from fake flowers we used in the next project. The eyes are styrofoam balls with more realistic-looking googly eyes, and the stems are pipe cleaners. I got this idea from somewhere, and I have no idea where. It was either last year or the year before that I thought, “I should make those,” and then never did. Happened to remember them this year. My tip for this one: moss smells fucking disgusting and you’re going to have to air out your house.

Finally, the last project, and also the easiest: 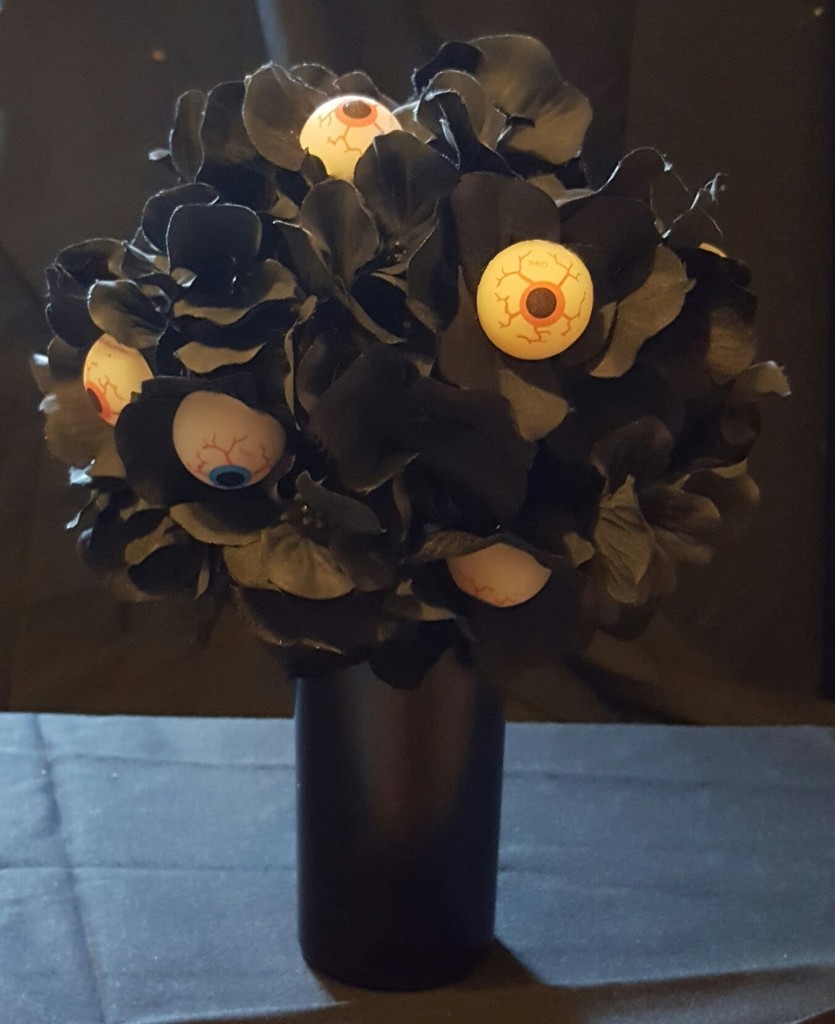 There is no easier Halloween DIY than this one. I already have a ton of spray paint owing to the fact that I tend to get mad about stuff and make signs. Anyway, I used black matte spray paint on a random glass bottle hanging around. The flowers are fake ones I bought at the craft store. To make the eyes, I bought a pack of glow-in-the-dark bouncy balls with eyes on them, then cut them in half and glued them into the centers of the flowers. My tip: find flowers with hardy construction that can bear the weight of half a super ball. Also, use hot glue instead of tacky glue, which was my initial mistake. Eyes were EVERYWHERE, because they bounce when they fall off.

So, there you have it. Arts and crafts central. These are all pretty easy to do, and almost everything can be found at an arts and crafts store. Except for the ping pong balls, which I had to buy at a sporting goods store. I made the mistake of approaching one of the workers at the store and saying, “Two things: I need to know where your ping pong balls are, and also I’m going to need to use your restroom.”

It was only hours later that I realized why the guy gave me such a horrified look.