Now, I know that I’ve said I’m hanging up my Fifty Shades of Grey critique hat. And I meant it. But just because I’m done with a thing, that doesn’t mean that thing is done with me (see also: Catholicism, ice cream with too many wacky ingredients, my three separate lifetime bans from the Sprinkle Rd. Denny’s). And last week, whoo boy. Last week, Fifty Shades of Grey was certainly not done with me.

Are you ready to venture down one of the deepest, darkest rabbit holes you’ll ever find in fandom?

The day after the Oscars, I noticed something that really grossed me out. 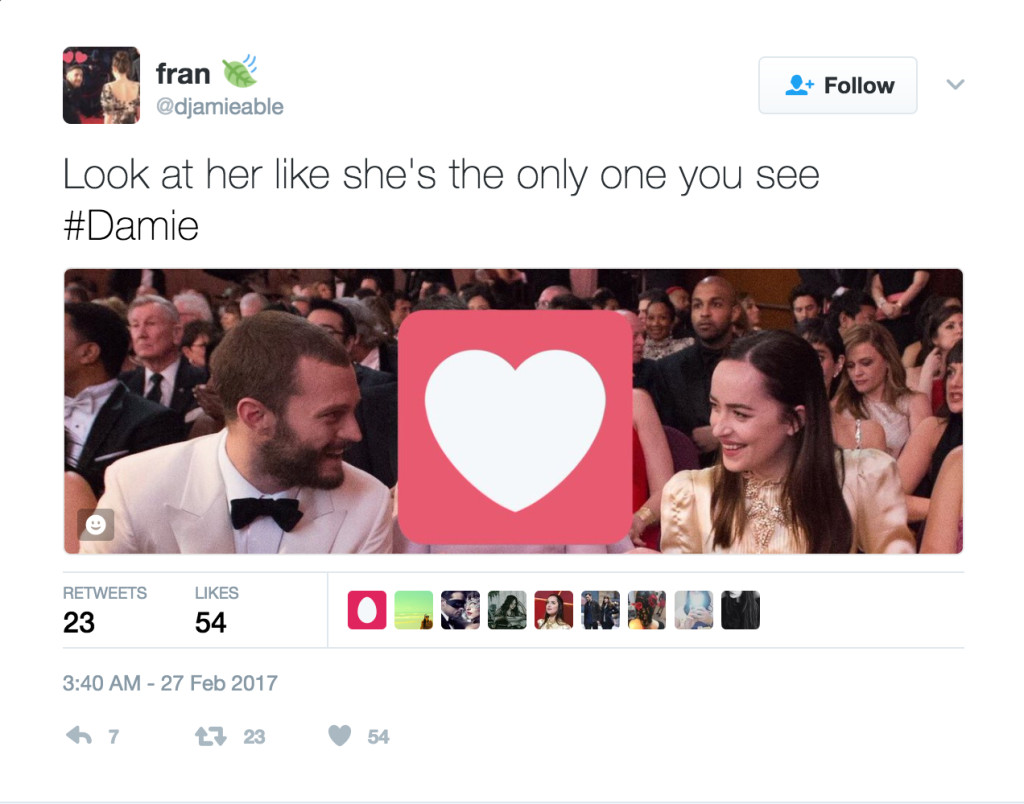 This post is going to be wildly image heavy, so follow the cut if you’re curious to see how this all plays out.

So, horrified beyond words, I added my two cents about these asinine tweets from thoroughly asinine real-person shippers:

In the spirit of the internet, those first two tweets were ignored, while the last two were roundly chastised. Allegations that I was a “Damie” shipper myself rolled in, prompting me to correct them:

And read them all the Damie shippers did, opening the floodgates for what resulted in four days of insults, tweet-n-runs, and full out delusions.

Many of them assumed that I didn’t know what ships and shipping were about:

Clearly, my advanced age was the issue:

If you were here during the Great Fifty Shades of Grey Recap Of Basically The Entire Last Five Years, you know that one of the supposedly insurmountable obstacles in Christian Grey and Anastasia Rose Steele Grey Limited Holdings Incorporated was their vast age gap. After all, Ana was twenty-two and Christian was…twenty-seven.

And if you weren’t here for that? Yes, it was a major point of contention in the series.

So basically, I’m just too ancient to understand the appeal of publicly rooting for the demise of a real person’s marriage. Although, they have confused “public” with “private”:

One might think that I pawed tirelessly through great swaths of internet to uncover these meek, harmless shippers keeping to themselves, but in reality, I just found them posting all their nonsense on a heavily trafficked hashtag. And despite the fact that I didn’t hashtag the tweet they were replying to, they somehow found it. How? By obsessively combing social media, looking for people to pick fights with. I was warned by several 50SoG fans that this wasn’t exactly the most…reasonable fandom to deal with. In fact, they informed me of that, themselves:

They weren’t really as dangerous as they wanted me to think they were. More like really, really annoying. I received hundreds of tweets from people who really didn’t care about my opinion or want to talk to me:

They cared so little, all over the world:

They didn’t care at all! They didn’t care for four whole days of non-stop non-caring, by which time fans of Fifty Shades of Grey were out in force defending me. It was like the Joker protecting Batman from the other Arkham inmates because they were just going way too far.

Of course, their behavior wasn’t their fault:

They weren’t responsible for flooding my mentions for days with their nonsense. I was responsible because I made them mad. If I hadn’t made them mad, they wouldn’t have spent four days hurling abuse at me.

Huh. That sounds like some books I read once.

A weird contingency of the shippers insisted that “Damie” is real, and that there’s plenty of proof that Dakota Johnson and Jamie Dornan are in a romantic relationship:

Tweets like this were sometimes accompanied by photographic evidence of the alleged affair. And by “photographic evidence” I mean pictures of the pair posing on magazine covers, the red carpet, presenting at awards shows, or actually filming the movie in which they pretend to be in love. While some people might think those photos from the set are just examples of the pair “acting,” the Damies know what’s really going down.

Despite my advanced age, a few people thought I just didn’t understand the concept of internet fandom because I was too new at this or too sheltered or…something:

Since they brought Star Trek into this, I decided to ask someone who might be familiar with the history of “shipping”:

And Mr. Shatner is absolutely correct. Because of concentrated abuse from his “fans,” Jamie Dornan and his wife (Amelia Warner, but known to Damie shippers as “the hag”) have had to leave social media due to people saying “disgusting things” about them and their children.

Eventually, the Damies got distracted and wandered away, as toddlers are wont to do. But the experience left me with a bad taste in my mouth. At one point, I joked that E.L. James needed to come pick up her trash, but only hours (and many, many tweets) later, that didn’t seem funny to me anymore. After all, she just wrote a book. She didn’t cast the actors or encourage the Damies to behave this way. And that’s something I find terribly frightening. Once someone creates something, be it a book or a movie or a space captain character who travels distant galaxies with beads of sweat glistening on his manly, manly brow, it’s out of their hands. What fans choose to do with it–for example, weaponize it against people in real life–is up to the fans alone.

And I really, really mean that.