Allow me to talk behind your back so you can be righteously outraged, STGRB.

Apparently while I was on vacation, our friends at Stop The GoodReads Bullies posted this shocking exposé about what a horrible, jealous person I am. And they discovered my closely guarded secret by reading a blog post I made in which I said I have professional jealousy. You know. The one in which I explained why writers experience professional jealousy over the recent P2P glut in traditional publishing. But they put together these obscure clues and boy, did they ever show me! They didn’t even have to write their own post, they just used screencaps of the one I wrote! Man, how did they do that? I was being so sneaky and dishonest in covering all that up.

Because the bloggers at STGRB lack any sense of self-awareness about how ridiculous and idiotic they are, I thought I’d do everybody and favor and refute some of their post. They begin with:

Professional jealousy is a topic that has been brought up several times on our blog in reference to some of the bullies. These are the bullies in our lists who are not just readers, but also authors who seek out other authors to harass, threaten, bully, and otherwise destroy their careers. Namely, these are authors like LH, AH, AS, etc. They are the ones who’ve bullied other, more successful authors like Jamie McGuire, Jessica Park, Amanda Hocking, EL James, Anne Rice, etc.

Ah, McGuire, Hocking, James, Rice… all authors whose careers have been cut tragically short by bullying. They showed such promise, yet now languish in obscurity, nary a penny to their names, because they experienced criticism. And as STGRB has warned us– oh! how they have warned us!– any amount of criticism whatsoever endangers an author’s important fee-fees. I remember that time when I made fun of 50 Shades of Grey and everyone returned those books to the store and it ruined E.L. James’s career.

More than once, our blog readers have made the comment that professional jealousy plays a HUGE role in this bullying and we at STGRB have to agree. However, we’ve never shown you actual proof of this fact until today.

Yeah, well, their blog readers also once rejoiced that they’d vanquished me by getting Blogger to slap a content warning on my old blog, even though the content warning was put there by me and had been there before whatever demented little crusade they thought they were waging even happened. I’d even made a post explaining that in order to abide by Blogger’s new TOS, I had put that content warning up, but clearly the changes in the TOS were affected by six or seven logic-impaired morons at an “anti-bullying” bully site, so they won! Good for them!

What I wrote in my post obviously doesn’t reflect the feelings or opinions of every single author who ever disagreed with STGRB. I know this because there are soooooo many people who disagree with them, it would be impossible for me to make a statement on their behalf without at least some kind of informal town hall meeting wherein we could vote to a consensus as to what would go into that, er, statement. Lost where I was going there. I feel like I should stop and clarify for anyone from STGRB that is reading this that in the paragraph after the first quote I was exaggerating for humorous purposes. I need to make that clear before they run off and make a post about how I really, truly believe that I’m powerful enough to destroy author careers. Because they cannot grasp irony. I do know they’re reading this, by the way, I’m not paranoid or flattering myself:

Now, ever since Jenny Trout was banned from Anne Rice’s blog a few weeks ago, we’ve been keeping a close eye on her.

Huh. Well, that’s a weird fucking thing to say. I feel like I should check my body for electronic tags or something.

If you all don’t remember that wonderful episode, we covered it in Anne Rice Bans the Bullies. Basically, Anne left a link on her Facebook page to our blog post covering Carpet Bomber #9, Nenia Campbell. Upon hearing of this, Jenny Trout, along with several other of her bully friends, hopped on over to Anne’s Facebook page, harassed her, and tried to get her to believe lies about about our website in order to discourage her from supporting us.

Whoa there. Wait a minute. In the blog post they’re referring to here, I say that 50 Shades of Grey is borderline plagiarized. I’ve never made plagiarism allegations toward After, but a reader commented on my blog that they found plagiarized content in a chapter. I never called Anna Todd a plagiarist. While I may have come out of the gate hard about Anna Todd, the post featured on STGRB isn’t a personal criticism of Todd as a person. In fact, since I’ve learned more about her, I’ve found her to be the anti-James. She sincerely appreciates the fandom who boosted her to this success, and she expresses gratitude to them for it. I respect her for that, but that doesn’t mean I can’t also have problems with publishing acquiring fanfic, with the poor quality of the manuscript, or with some of Todd’s statements about her writing process.

I don’t know, STGRB, you’re fucking up a lot of your post. You must not have been keeping that close an eye on me.

They go on to scold me for suggesting After is remotely similar to any other book and attempt to educate me on how blockbuster novels are launched. Obviously after spending two years following the 50SoG phenomenon, I’ve never given the subject a thought. And then they offer some advice:

GET OVER IT. STOP comparing yourself to other people and their career success.

I was kind of comparing everyone currently struggling in the business to this situation, but that’s still advice, I guess.

START focusing on yourself, your writing, and your career successes no matter how small they are.

First of all, that is most back-handed compliment-style advice I’ve ever seen. “No matter how small they are.” What gives them the impression that my career successes are small? Or even, that they’re small to me? And what makes them think I’ve survived a decade in this job without focusing on my writing and my career? I’ve heard this “focus on your own writing/career” thing for a while now, ever since I started blogging about 50 Shades of Grey, and it’s never quite made sense to me because… this is my career. This is my writing. Yes, I write books, but without the blog and the readers who have found me through it, those books wouldn’t be nearly as successful as they are. So… I kind of am focusing on my writing… it’s what they’re so pissed off about.

So, what are you going to do? Constantly bitch and moan about other people’s success and sit in your corner of the room with your arms crossed and a scowl on your face?

OR are you going to be an adult and choose to be happy with yourself and your life and your own success regardless of others who are doing better than you?

Neither, bitch! I’m going to decorate this sick ass DIY lawn gnome and I’m going to completely disregard the instructions on the package! WHAT NOW STGRB? WHAT NOW? 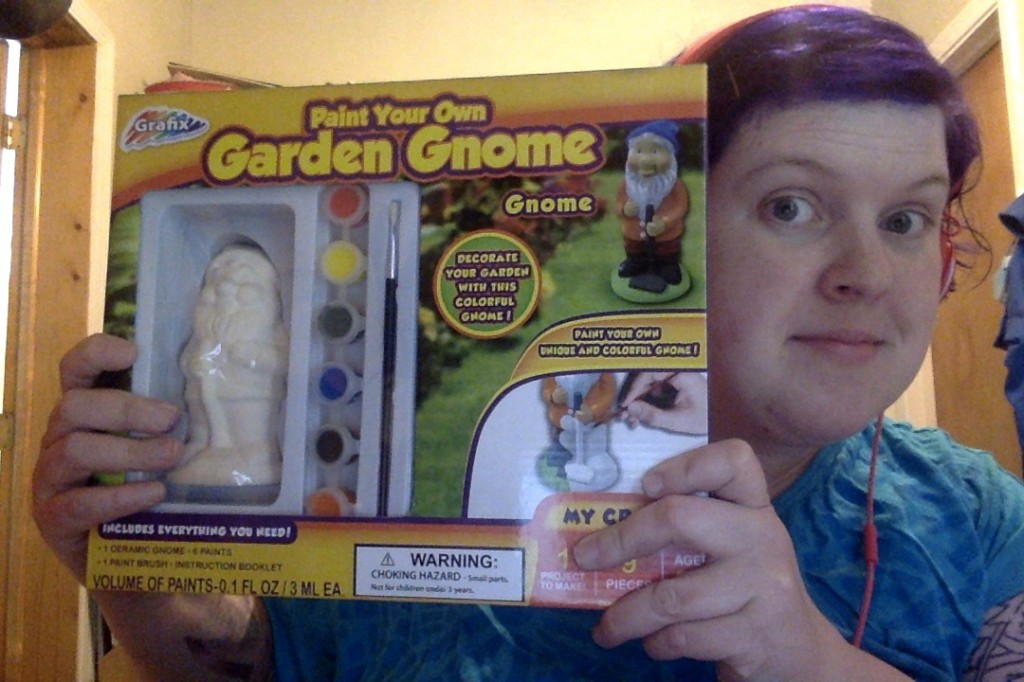 Here’s what the people at STGRB, and basically anyone who sang me that same tired song during the 50SoG recaps, are missing: when I, or any other author, gets frustrated, experiences professional jealousy, or is in general disappointed with the P2P phenomenon, it’s not because we’re not spending enough time on our own writing. In fact, it’s the opposite; we’re wondering why we’re spending all this time in the first place. And it’s not just jealous wannabe losers like me who are fed up with the fanfic trend. Plenty of authors who are more successful than I am (and don’t worry about me, STGRB, because I’m doing just fine with my “small” successes) are rolling their eyes at P2P deals. You can be successful, appreciate what you’ve done, and still think the industry does shitty stuff. And you can do it while still maintaining your own career.

If you’re a regular commenter here, you might have been featured in screencaps in the STGRB post, as well, because STGRB has a bone to pick with you, too, damnit! You’re all jealous! JUST JEALOUS! IN A POST ABOUT PROFESSIONAL JEALOUSY! HOW COULD YOU?!

The only thing about their post that really bothered me was when the author of the post, Johnny B Good, made the following statement in the comments:

In her post, Jenny does complain about publishers, but if you read the rest of her blog, she has a very unhealthy obsession with Anna. She is constantly talking about her and ripping her book. She is so green with envy, it’s sad.

Blog, not blog post. Check out the rest of her blog. In other posts on her blog, you’ll notice she has an unhealthy obsession with Anna. It’s jealousy.

Another commenter, Tweedle Dum, chimed in with:

Now, hang on a second there. The “stalk” word is out, and the “unhealthy obsession” word, as well. I’ve made seven posts on this blog about anything to do with Anna Todd and After, out of six hundred and eighty posts total. That means my “unhealthy obsession” takes up a whopping 1.02% of my entire blog… so maybe we need to think twice before linking my name with “stalk.” And I think it’s pretty ballsy, on top of that, to say some shit like, “we’ve been keeping a close eye” on someone, then criticizing them for having an unhealthy obsession.

I guess what I’m saying on this one, STGRB, is, come get it. Continue making posts about me. Lord knows I had fun last night reading your post in an over-the-top, melodramatic voice, and with my crippling daddy issues, it’s not like I don’t appreciate the negative attention. Every time you make one of your laughable little “gotcha!” posts, I’ll probably blog about it to make fun of you, and I’ll have a good time doing it. But eventually it will get boring, because you’re boring, and you’re never going to find anything on me that I wouldn’t have admitted to, anyway. Which is exactly what you tried– and abysmally failed– to do here.