Remember 2014? It was a shitty year for a lot of things, but one big positive came out of it: we got a break in the 50 Shades of Grey mania. The title was barely on the radar for all of 2014. News about the film trickled out the way it does for any highly anticipated book-to-movie adaptation, and the trailer came out, but between those brief flashes, blessed radio silence. There were no thinkpieces on women’s sexuality and how positive the books were for it. Nobody made jokes about spankings on morning news shows. Everything was generally calm, and 50 Shades of Grey barely flitted through the consciousness of anyone trying to avoid it.

Brace yourselves. Bullshit is coming.

The 50 Shades of Grey movie is on its way to ruin your Valentine’s Day like a bad breakup on February 13th. The movie premiers on that most romantic of the commercially-driven gift-giving holidays, which makes sense because it is undisputedly the greatest love story of all time. Who doesn’t swoon when they imagine being trapped into a relationship that stresses them out, chained to a person they’re terrified of but unable to leave because that person has enough money to track them down no matter where they may flee?

In addition to all the magazine and gossip page articles we’re going to be subjected to–”Dakota and Jamie! Such Sexy! Much Hot!”–we’re also going to get shat upon by the commercial machine that is movie tie-in merchandising.

There’s already been a dustup about Target’s rather iffy placement of sexy 50 Shades merchandise, and one big giant crybaby started a change.org petition back in December to urge the superstore to stop selling copies of the novel, lest men who feel oppressed by the impossibly high sexual standards set forth in the book become, I shit you not, violent when they can’t satisfy a woman (but don’t, you know, stop selling the book because it promotes violence toward women in a more blatant and totally obvious sense. Do it to protect the male fee-fees). But the first actual movie tie-in product to come to my attention ahead of the landslide of cheap plastic shit that will no doubt flood shelves anew this February is OPI’s underwhelming nail color collection.

OPI is a brand known for splashy gimmick collections based on movies and celebrities. They’re basically the MAC of the nail polish world in that regard. If you’ve got a movie coming out and your target demographic is females ages 18 – 50, OPI is going to be a part of your merchandising. As you would expect, the 50 Shades of Grey line has four gray polishes, a red that they didn’t even bother to name Red Room of Pain, and some kind of multi-dimensional creme/gray frost. If you go to the OPI site, you’ll find the collection, with names like, “Shine For Me,” and “Embrace the Gray,” but strangely no, “It Takes Two to Charlie Tango” which I personally thought was a shoe-in considering the fucking awful puns OPI’s marketing department comes up with already.

Since the polish names don’t match, I took the liberty of fixing them: 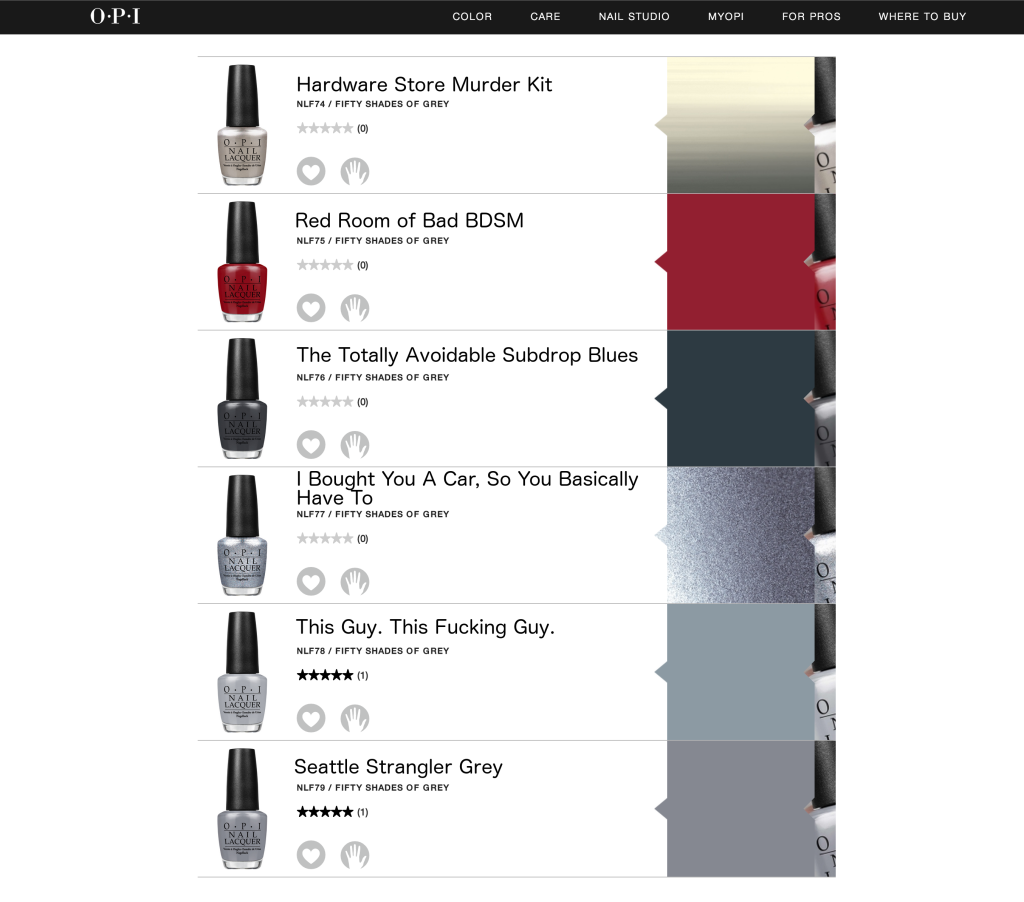 If OPI’s dilution of their own brand with endless repeats of the same colors repackaged every time Gwen Stefani wants to sneeze out a collection hadn’t already driven me far, far from their products already, I would stop buying them. If you’re looking to vote with your wallet out of the mean satisfaction you’ll get (because let’s be honest, there are more idiots in this world than not, and they’d snap up an actual, human turd if someone put it in a box that had Jamie Dornan on it, so boycotting won’t do a damn thing), then I suggest you do the same.

In the meantime, if you find a 50 Shades of Grey movie tie-in product (not the book-related tie-ins that are already out there, like the godawful swill they’re selling as wine or the laughably shoddy sex toys they’re slinging), let me know. I’d like to make fun of it.