#LegionXIII Rome Watch-Along, S02E07 “Death Mask” or “If You’re Going To Be Petty About It, Servilia.”

This week I didn’t realize what day it was. I thought this was still Thursday, so the post is late. Mea Culpla. OMG that, works, because Rome/Latin get it?!

Quick rundown of the episode: Real super quick this week, actually. Servilia, destroyed by her son’s death and what amounts to a complete check mate between her and Atia, mounts a days-long call out/curse combo and kills herself in front of Atia’s door. Later, when Atia suggests a strategic marriage between Antony and herself, Octavian is like, this is a great idea, but he’s going to marry Octavia instead, Atia is like, damn, maybe that bitch did have the last laugh.

Octavia isn’t the only one being forced into a marriage she doesn’t want. Jocasta, formerly the daughter of a merchant, marries Posca, because he’s her best choice now that she’s been raped and impoverished.

On the Pullo side, he fucks up real bad. After Gaia disrespects Eirene, Pullo tries to whip her, but ends up raping her (Gaia appears to be into it and an equal aggressor, but she’s a slave, and we’ve already seen her trying to move up in the household via her sexual charm, so this isn’t like, “Hey, hot guy, wanna bang,” but “I’ve got no other choice.”) Gaia sees her chance, now that she knows Pullo would actually be into her sexually, so all she has to do is remove Eirene.  She goes to ye old abortionist and gets some herbs.

Vorena the Elder is having a full on affair with the guy who keeps giving her straw dolls, and Memmio “catches” them together. He offers to keep it secret from her father, as long as she spies on him for her. Like, Memmio, this is by far the most complicated plan anyone has ever concocted for no reason, because Vorena fucking hates her dad and would sell him out for q-tip.

Timon and his brother decide they should kill King Herrod while he’s in town, but at the last minute Timon spots Atia in the crowd and, presumably not wishing to prove to her that he is, in fact, an animal, kills his brother in an argument instead.

And that’s it, in a nutshell.

My favorite part of the episode: The way Eirene says, “She say she gonna choke me wit a stick!”

My least favorite part of the episode: Pullo and Gaia. I hate that it’s a) yet another scene of rape, as Gaia is a slave, b) an incredibly violent scene seemingly justifying itself as rough sex, and c) is uncomfortably hot despite a and b, so it makes you feel bad.

Favorite costume: I really dig the intricate nature of Jocasta’s wedding dress. Actually, from here out, Jocasta really becomes the style icon of the show. Or, at least, she rivals Antony.

Team Atia or Team Servilia: Servilia. That is probably the greatest case of getting the last word that anyone has ever seen.

I AM NOT OKAY WITH THIS, TROUT!!!! #LEGIONXIII

What hairdo or costume would Bronwyn steal? She would definitely make something with that embroidered border. 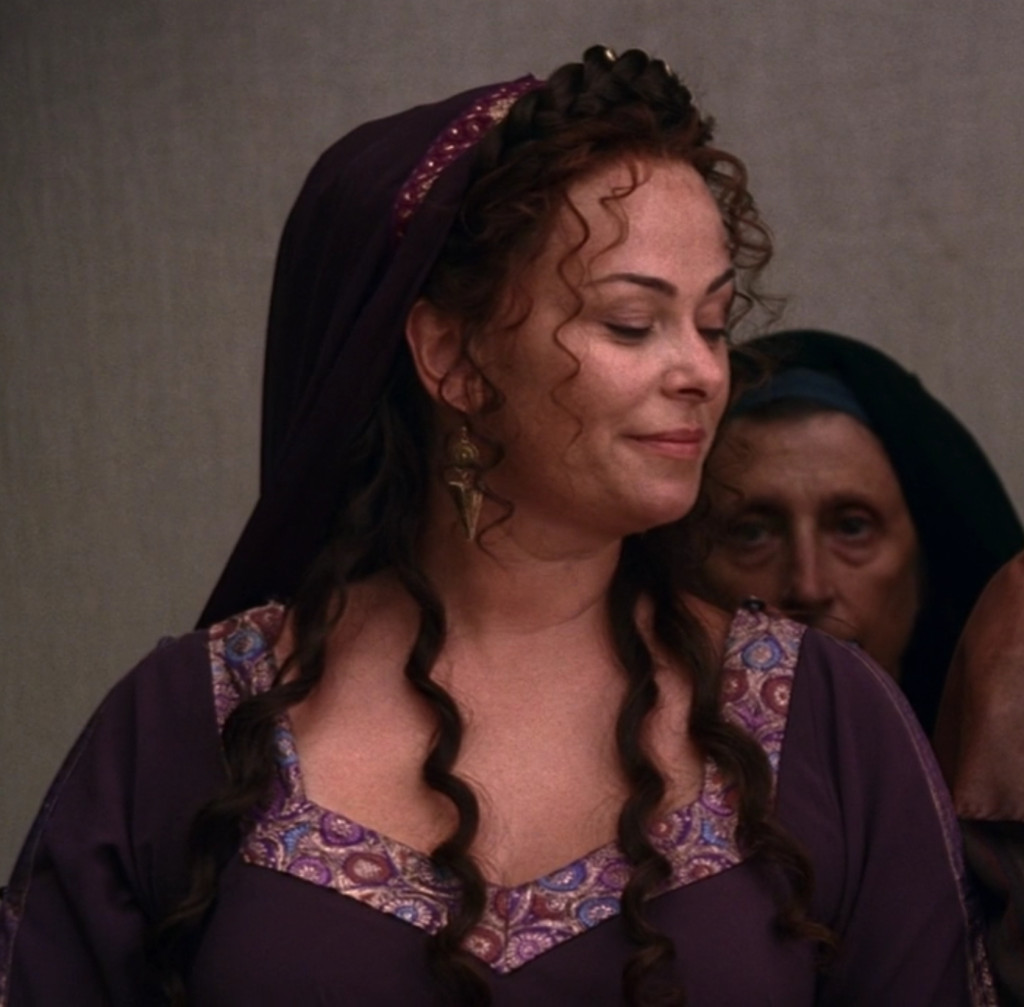 Guess Jess’s head canon. My assumption is that Vorenus and Pullo still sail the seas for her, even though the angst has been turned down a little in these past couple episodes.

Now go check out Bronwyn’s post, as Jess’s post is pending due to injury (she has stitches all over her hand, it’s gross), and join us Monday at 9 PM EST for season two, episode eight, “A Necessary Fiction”. Tweet to #LegionXIII to join us!