So, here’s a quick rundown of episode two: This knight named Valiant rolls into Camelot with an enchanted shield that releases three vipers at his command. He uses this magic to wound a knight in the tournament that seems to be a bi-weekly occurrence as the show really gets rolling. Merlin knows Valiant is using magic and goes to Arthur for help, but when the only witness to the sorcery dies, Uther accuses Arthur of bad sportsman ship. Arthur must fight Valiant or look a fool and a coward, but fighting Valiant will put him on the wrong end of some vipers, so Merlin figures out how to command the shield’s magic in a large public display during the fight, Arthur straight up guts the guy, and the king throws his son a few meager scraps of affection.

If I had written this episode, I would have changed: This is a super minor nit-pick, but it bothers me every time I watch this episode. At one point, Merlin sees Valiant’s shield come to life, and all three vipers on the shield are fighting for a mouse. Then Merlin runs back to tell Gaius that he saw one of the snakes come to life. I’m almost certain this is a continuity error caused by the effects team going, “Hey, wouldn’t it be cool if,” and the director saying, “Yeah, sure, no one will notice that line.” Well, I noticed it, a-hole.

The thing I loved most about this episode: I love that Arthur so readily trusted Merlin. He doesn’t really know him, and he definitely doesn’t like him, so it speaks to his character that he was willing to take a risk and publicly denounce Valiant on the word of his servant. Arthur is really dickish through most of the series, but in season one especially. It takes real talent to draw out the good parts of him in this season.

Something I never noticed before: When Merlin turns the stone statue of the dog into an actual dog, it becomes a Rottweiler, but the dog in the statue is clearly some king of elegant nosed hound. 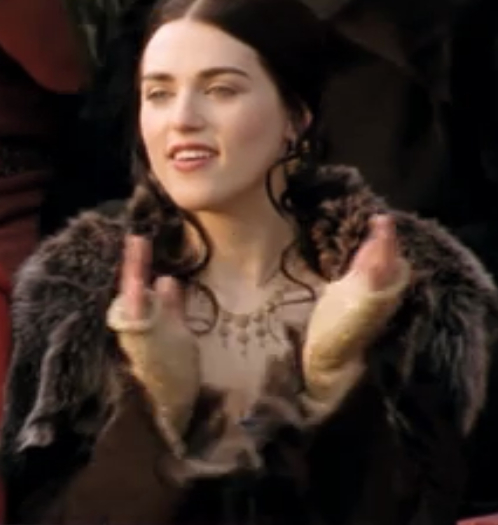 Here is proof of some random headcanon I created: I still got nothing. But trust me, it’s on the way.

What object would Bronwyn steal from this episode? Valiant’s broach:

What Merthur moment did Jess have the naughtiest thoughts about? Merlin’s little smirky-smirk when he’s armoring Arthur for the second time in the episode.

That’s it for this week. Join us on Monday as we watch S01E03, “The Mark of Nimueh” at 8pm EST on the hashtag #MerlinClub.