I know a lot of you have been waiting for me to go see 50 Shades of Grey and come roaring back to the blog in a blaze of righteous fury, but it’s a little difficult for me to do. The film is bad. And not bad in a fun, Showgirls kind of way. Bad in the way that feels like you’d be doing the actors a service by turning away from the screen and sparing all of you a lot of embarrassment.

In her role, Dakota Johnson did the impossible: she made me like Anastasia Rose Steele. Every annoying quirk and simper of her book counterpart is washed away, in part because the audience is spared the litany of complaints and absurdly antiquated expletives that made up her internal monologue in the book . Although she still bites her lip–my guess is that at least $500,000 of the film’s $60M budget was spent on chapstick–and trips over her own feet, movie Ana is funny and endearing. She has a backbone that book Ana lacked, and more sexual agency than E.L. James afforded her. There were places in the film where her delivery seemed to suggest that she was as bewildered by the actions of Christian Grey as the audience should have been.

The best that can be said about Jamie Dornan is that he showed up to the set and stood in the correct lighting. I can’t even say that he did the best he could with what he had to work with. It has to be difficult to perform in a role where the character’s singular personality trait is “sexy weirdo,” but Dornan doesn’t even appear to be trying. There’s a sense throughout that he knows he’s too good for the material, but rather than coming off with the same oh-jeez charm that Johnson exudes, Dornan flounders, seemingly unwilling or unable to find a workable angle to slip more than one dimension into the character. It’s as though the leads are aware that they’re in a bad movie, but only one of them is trying to make the most of it.

The rest of the cast is hit-or-miss. Marcia Gay Harden breezes through her scenes as Christian’s mother in a bad impression of Lucille Bluth, while Jennifer Ehle infuses the role of Ana’s hopelessly romantic mom with effortless maternal sweetness. The fathers might as well be wallpaper, and Rita Ora, whose casting was touted as the second coming when it was announced, is reduced to uttering a handful of earnestly delivered, but forgettable lines. She shows a lot of promise for the sequels; though the script keeps her effectively silent, she steals the attention from the rest of the supporting cast in her scenes.

Screenwriter  Kelly Marcel and director Sam Taylor-Johnson managed to trim many of the most ridiculous and creepy bits from the novel. Not only did they do away with the infamous tampon interlude, but they mercifully shortened the fingering-under-the-dinner-table scene at Grey’s parents’ house, and we were spared Ana’s forced gynecological consultation. References to the helicopter were reduced by at least 90%, and when Christian fails to kiss Ana outside of the coffee shop, she doesn’t crumble to the ground weeping in a parking garage. Gone too is any mention of Ana’s sexual non-history. Though she tells Christian that she’s a virgin, the script doesn’t bring up her startlingly absent pre-Grey sexuality.

But even without the melodrama, 50 Shades of Grey is destined for absurdity. The on-set fights between the director and author are well-documented. It’s fun to guess at which lines remained at the author’s insistence; when Dornan mournfully tells Johnson, “I’m fifty shades of fucked up,” you can almost hear the screenwriter’s resumé revising itself. It’s no surprise that in moments when the dialogue skews to the side of clunky, it’s almost always on lines that appeared in the book. “I don’t make love. I fuck, hard,” and “Laters, baby,” both statements that fans of the novel swooned for, fall flat when spoken aloud, and more than a few bursts of laughter punctuated the showing I attended, usually at moments where the audience was clearly meant to engage emotionally. The soundtrack does no favors, either. As Christian took care of Ana’s virginity “situation,” Sia warbled the lyrics, “You can do it,” in the background, as though the soundtrack was unintentionally cheering him on thrust for thrust.

And oh, the thrusting. The only real disservice the movie does to the book is not deviating from the sex scenes as written. The novel contained endless pages of repetitive sensuality; he ties her up, he goes down on her, they introduce a prop of some sort, he mounts her and she “detonates around him.” As mind-numbingly copy-pasted as those scenes read, the hastened pace of filmmaking renders them more unbearable. Viewers are given a tantalizing glimpse into a room with far too many and far too similar sex toys: my friend Quinn remarked that Grey’s Red Room sported no less than five identical canes, and he appeared to have enough multiples of the same type of cuff to bind a sub with seven arms. Yet a blindfold, some dangerously represented bondage, and a few timid slaps with a riding crop and a flogger is the only kink the audience sees. Yes, the visual is more tantalizing than reading vague descriptions of touches down there and ellipses-heavy orgasms, but we never actually see the culmination of all their breathy passion, either. Instead, we’re treated to various angles of vigorously flexing buttocks and some extremely light sensation play, none of which seems to back up Grey’s deep need to cause Ana pain. I’ve been on connecting flights that were more painful than any of the BDSM in this movie.

A common theme in reviews I’ve seen from other bloggers was a sense of relief that Grey doesn’t come off as abusive. This makes me wonder if I didn’t accidentally wander into the wrong theatre and see something else entirely. Christian still tracks Ana’s cell phone to find her and take her away to undress her and sleep beside her in his hotel room. When Ana sends him a message giving him the brush off, he enters her apartment uninvited in the name of  seducing her. He steals her car and sells it, replacing it with a more expensive one without asking her, and when she objects, he spanks her and leaves her without aftercare. Another spanking incident takes place at his parents’ house, where he hoists her over his shoulder and slaps her behind out of anger at her failure to clear her vacation plans with him. Perhaps the most disturbing example of his abuse comes at the end of the movie, when, at Ana’s request, he lets loose on her with with a braided belt. Though she doesn’t safe word, the sight of her lying there, openly weeping and clearly not enjoying herself, isn’t enough to stop him. Without Ana’s inner monologue describing how terrified and intimidated she is by Grey’s behavior, his abusive tendencies and exertion of total control over her really are lessened in comparison, much in the same way that having a cavity filled is less unpleasant than having a root canal. The abuse is still there in full force, and though Ana comes off as spunky, she doesn’t object to Christian’s actions until the very end of the movie. No matter how much agency the script gives Ana, her simply not minding or being able to excuse Grey’s stalking and possessiveness doesn’t absolve him of it.

The run time, a bloated 125 minutes, caused one gentleman in the theatre to stand up and shout, “Thank God!” the moment the credits rolled. Considering that E.L. James is rumored to have demanded to write the sequel’s screenplay, maybe we should all just be thankful that this first movie wasn’t as bad as it could have been.

Oh, and in case you were wondering, I did wear a little something special to meet Mr. Grey: 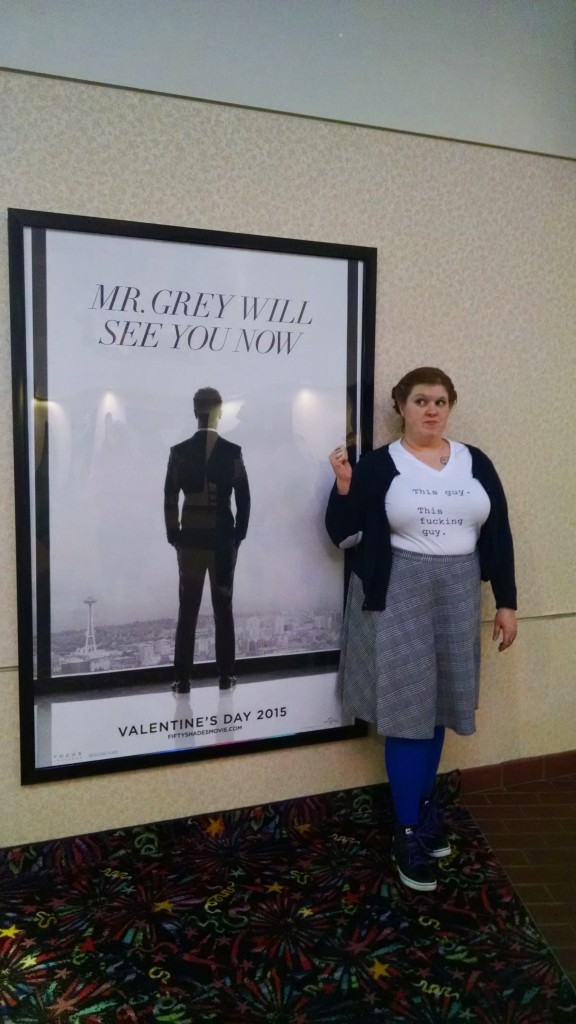 (For those who’ve asked, I made the t-shirt on Zazzle, and it’s available here)