Hey everybody! Occasionally, I’ll let another author jump in and take over the blog, and today it’s Cecilia London, one of my very favorite Twitter people! She’s here to talk about her books, Dissident and Conscience, why she feels they would appeal to Trout Nation (she’s not wrong), a hot guy to google, and how poisoned turkey influences her writing process.

So now I’m going to turn it over to Cecelia! 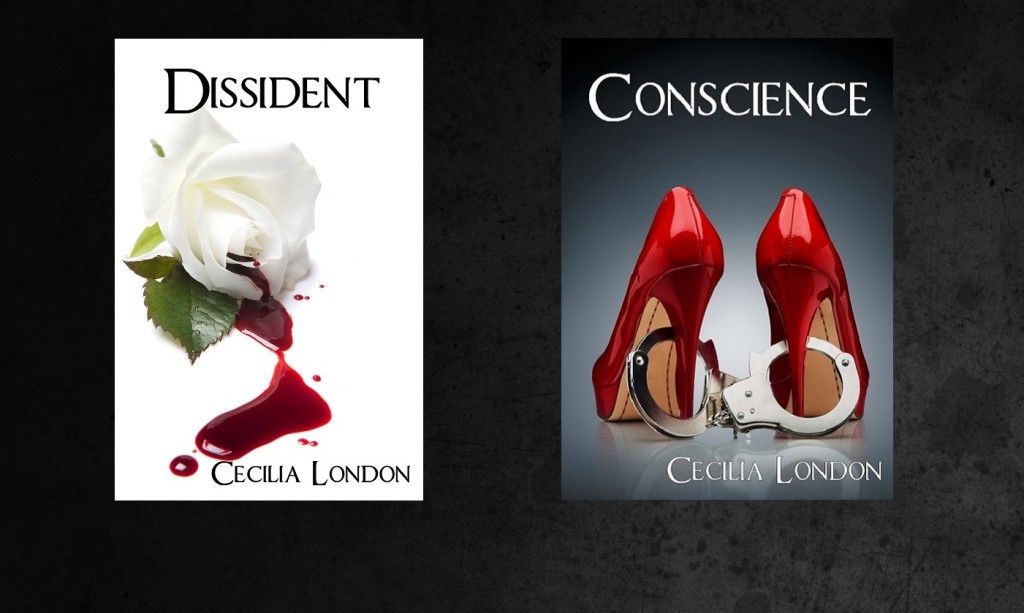 First off, thanks to Jenny for having me. I’m hoping that maybe some of you have heard my name before…if not, then read on, because I’ve got some hot sex, angsty drama, not-so-unrealistic dystopias, witty dialogue, well-developed side characters, a sexy but sensitive alpha hero, and a smartass heroine to share with you.

Where should I start? I’m writing a six book series, and it has a little bit of everything. Yes, I know that makes some people want to throw things. But rest assured, most of the books are well on the way to completion and just need some polishing and editing. I won’t leave any readers hanging, I promise. The series was initially a trilogy but as I kept writing the plot kept getting bigger. I realized it could not be contained in just three books. So now you’re stuck with six! But since the characters are pretty damn likable, it’s not a problem.

The first book in the series, Dissident, is currently free. It’s been described by one reviewer as “political dystopian intellectual smut,” but it’s primarily contemporary romance. However, I can almost guarantee that it’s unlike any romance novel you’ve read before. I wouldn’t make that kind of statement if reviewers hadn’t told me that, because otherwise I think it sounds a little pretentious. But it’s definitely outside the box. Which has made it a bit difficult to market, but that’s why I’m here…to find my people!

Let’s focus on why it’s different. We’ve got a silver fox hero in his early fifties and a passionate heroine in her early forties. They’re a bit younger when we first meet them in flashbacks, but there’s no need to split hairs. Let’s get a yay for older characters. Amirite?

Jack…our hero. The millionaire silver fox and reforming playboy. That may seem like a rehashed trope or overdone concept but I assure you, there is much more to him than meets the eye. And our heroine Caroline can certainly hold her own. Strong, smart, and funny, she’s hardly a pushover. Oh, and she’s a feminist too, because why not? I tossed all my idealistic liberalism into her, since it seemed only fair. 😉

And if you’re looking for a little visual inspiration, do a Google search for Laurence Nicotra. He’s the male model who is now my perfect Jack. Go ahead. I’ll wait. I’ll understand if it takes you a while. He distracts me a lot.

We’ve also got a unique backdrop for our story. In the Prologue, Jack and Caroline are running through the forest, presumably to get away from government agents who want to take them into custody. They have information on a corrupt, totalitarian regime in Washington and are determined to get it to safety. Caroline, seriously injured, begs Jack to go on without her…and he does.

When Chapter One begins, Caroline is now a prisoner being held at a VA hospital. Still recovering from her injuries, she is in a medically induced coma. Her relationship with Jack is explained through flashbacks, which make up the bulk of the first book.

In the first flashback, it is revealed that Caroline is a Democratic member of Congress who made some none too charitable remarks about Jack (a newly elected Republican) during the past campaign. She tries to make amends and is initially rebuffed but once Jack decides to stop acting like a prick, a friendship and more is born. 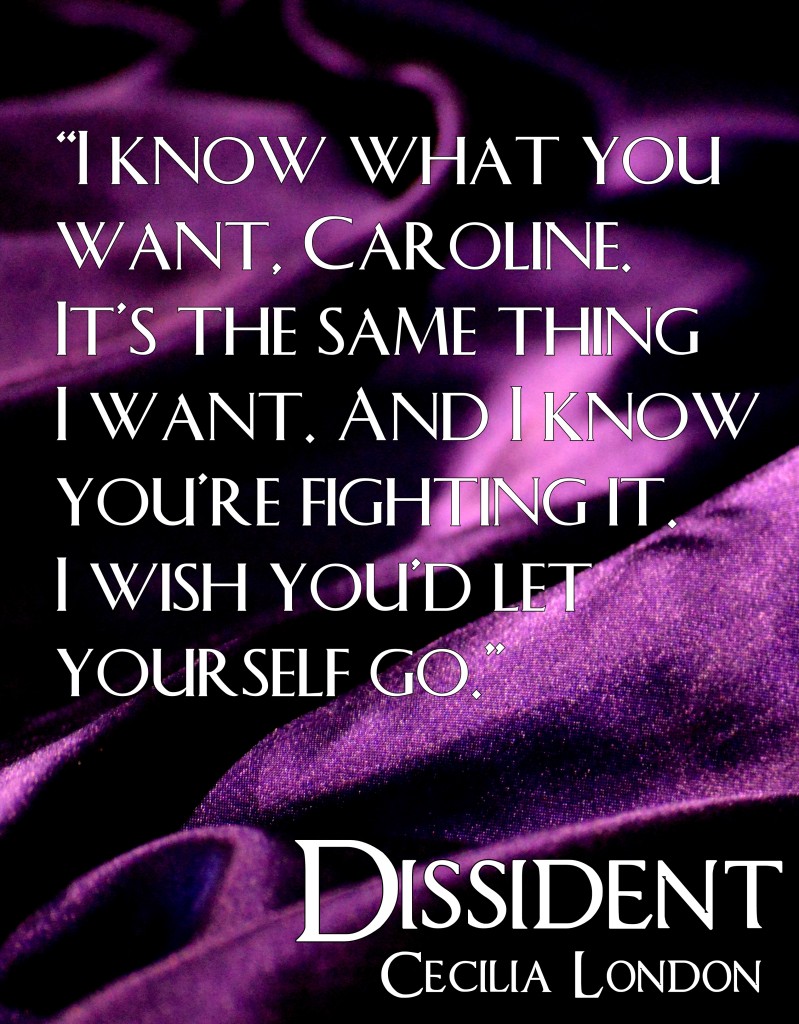 But all is not well in Caroline’s past. Their budding romantic relationship develops at a beautiful slow burn against a political backdrop, but they still have obstacles to overcome. Thus, Dissident ends on what’s been called a dirty little cliffy….which brings us to the second book in the series.

Conscience, releasing August 17,is a much darker book than Dissident. It’s got more action, more angst, more brutality, and in the words of one advance reviewer, is “gritty, suspenseful, and hot as fuck.” 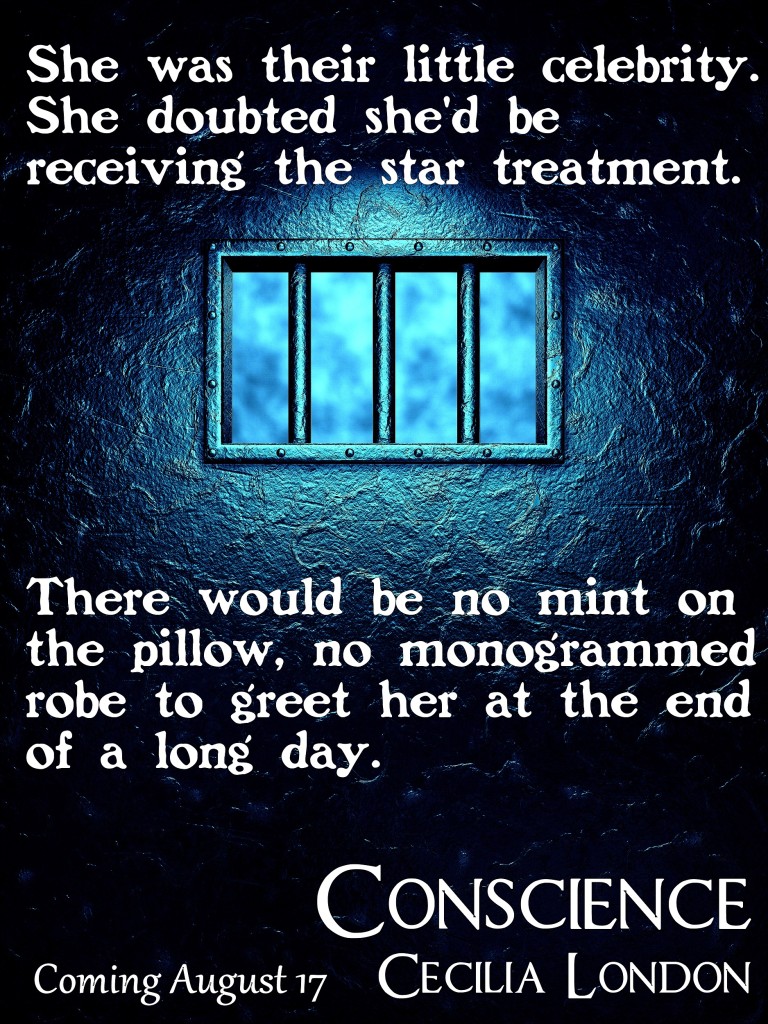 Dissident and Conscience are told in a non-linear fashion, with the present and past designed to meet at the end of the second book to allow the reader to discover just how Jack and Caroline ended up in that forest. The reader learns more about her relationship with Jack, about her children, about the friends who hold her heart. More information is revealed about how the United States turned into a repressive regime. The evolution of Caroline from politician to leader of a growing rebellion takes place over the course of the books. Though readers are treated to more flashbacks in future installments, they are sporadic and random (and frankly, they were really just an excuse to add more hot sex scenes). 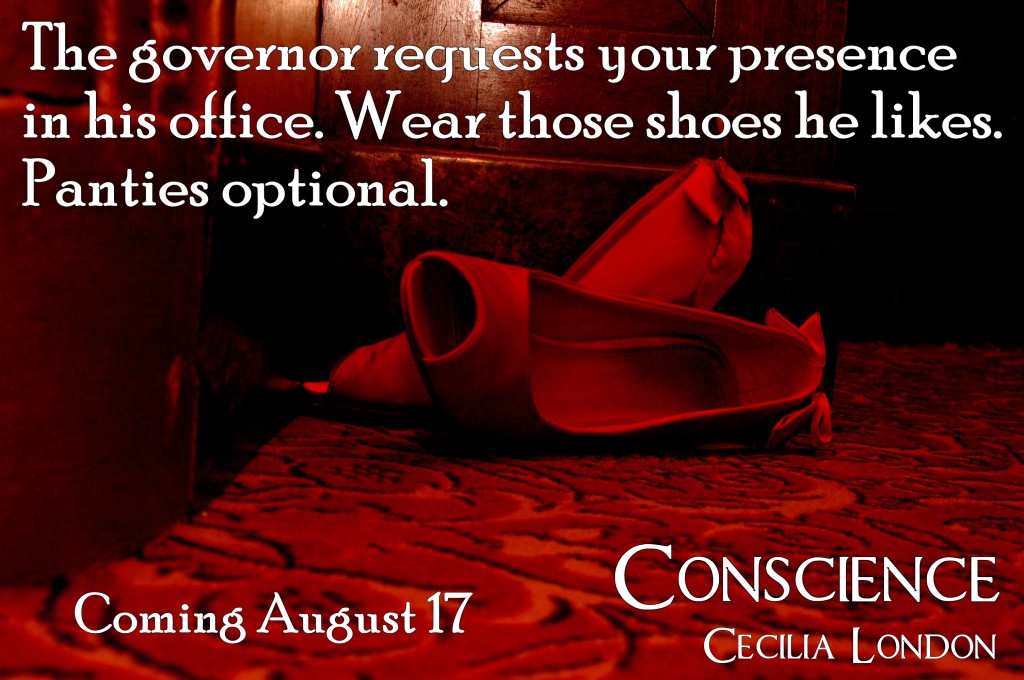 I touch upon several themes in the series, but ultimately it’s an epic romance between the two main characters. Arguably they have bigger obstacles to overcome than the average couple, but I wanted to create a unique world in which they could live. They’ve been in my mind for years but it wasn’t until I ate some bad BBQ and suffered some mild food poisoning that I came up with the idea for the series. Thankfully I haven’t needed foodborne illness to come up with ideas for other books, but if you’ve got a mean case of writer’s block, I recommend eating some tainted turkey.

There are a ton of dystopian books out there. I’ve read many of them, both YA and adult, since I love speculative fiction almost as much as I love romance. I re-read The Handmaid’s Tale every year just to help me keep perspective, even though it seems to get a little more realistic every time I pick it up. (Note to Margaret Atwood: Stop writing metafiction!)

Many dystopian books give little to no explanation of how societies arrived at such a dark place. Maybe there was a war, or a famine, or something else, but most of them take place years after the critical event that changed their society. I wanted to write a series about how a perceived dystopia came to be, and how it might be stopped before things went too far.

My books aren’t exactly heavy on the details, but that’s by design. I give away bits and pieces of how the regime came into power, but I do not dwell on it. The United States has a political system brilliantly designed to stand the test of time. But its beauty is also its weakness. What would it take to send it all crashing down, particularly in an age of apathy and disconnect? If nothing else, I hope I’ve given people something to think about, and that these characters and this plotline have given them a reason to question their own perception of things.

Jack and Caroline have tremendous privilege. They have wealth, power, and education, and are relatively well-regarded by the public. Facing increasing political and economic pressure, they could have cut ties. Jumped ship. Skipped town and ridden off into the sunset with their family and friends. But they didn’t. What would it take for someone who had that kind of advantage to be willing to give it up for the greater good, to sacrifice for others, when it would be so easy to save your own skin? And how do you deal with the aftermath of your sacrifice? These issues come into play in future installments in the series, as it evolves from one with political overtones into a story arc that focuses on relationships, love, and ultimately, triumph.

Even though I touch upon some complicated issues, the books are not meant to be overly political. They’re not designed to lecture or sway. They’re not literary fiction. They have depth but they’re not heavy. They’re simply there to tell a damn good love story. Each book may leave readers with more questions than answers, but that’s part of the appeal of the series. You have to pay attention to the little things that might become more significant later. And even if the answers are elusive, you’ll still get a captivating romance and a happily ever after.

Above all, the overriding message is one of love and passion, of hope and faith, and of desire and determination. And I hope readers will enjoy the ride.

So check them out, won’t ya? Since Dissident is free, you have nothing to lose. Links to the books are below. Thanks for having me, Trout Nation!

Catch up with me on social media!