Jennifer Morningstar’s debut: all the news you need to know!

Then, I was just tootling along in my files a few days ago and I ran across two books I had pretty much forgotten that I’d written. Infernal Devices and Bound In Brass are steampunk erotica previously published by a small press. The rights reverted to me and I never got around to re-publishing them. They’ve just been languishing in my writing folder. Languishing and being, well. Pretty hot.

Do you like straight-laced Victorian dudes who own and operate a secret steampunk sex dungeon? What if they had tattoos and like, piercings in places that would be covered by respectable Victorian dude clothes? What about sexually curious good girls who can’t resist a good time with an aether-powered fucking machine? Now, how do you feel about getting a second chance to snag some out-of-print titles with all those features? 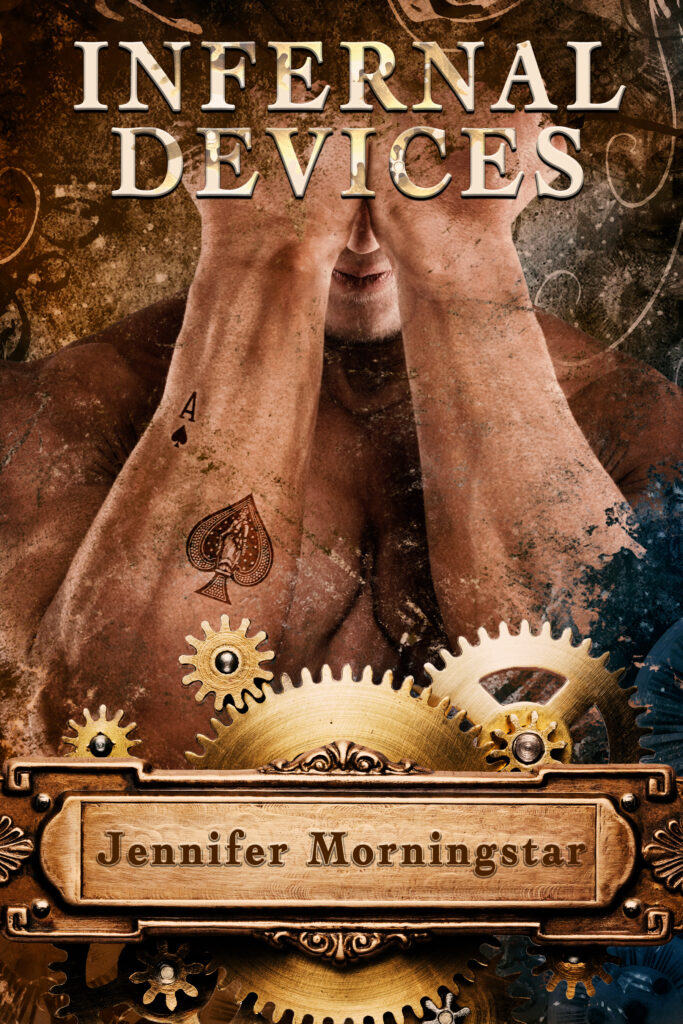 Permilia Deering goes to The Two Aces looking for the sexual excitement that she knows she will not find with the man to whom she is affianced, notorious cold-fish Wallace Sterling. On her first visit to the club, she meets the Ace of Spades, a masked stranger who drives her to heights of passion she’s never dreamed possible—and makes her seriously reconsider becoming a mannerly society wife.

When Wallace Sterling first glimpses his fiancée standing outside The Two Aces, he assumes she’s uncovered his secret identity—the Ace of Spades. But Permilia has no idea that her intended is living a double life, and Wallace worries that he’ll be out of the picture once she gets a taste of what the Ace of Spades can offer her… 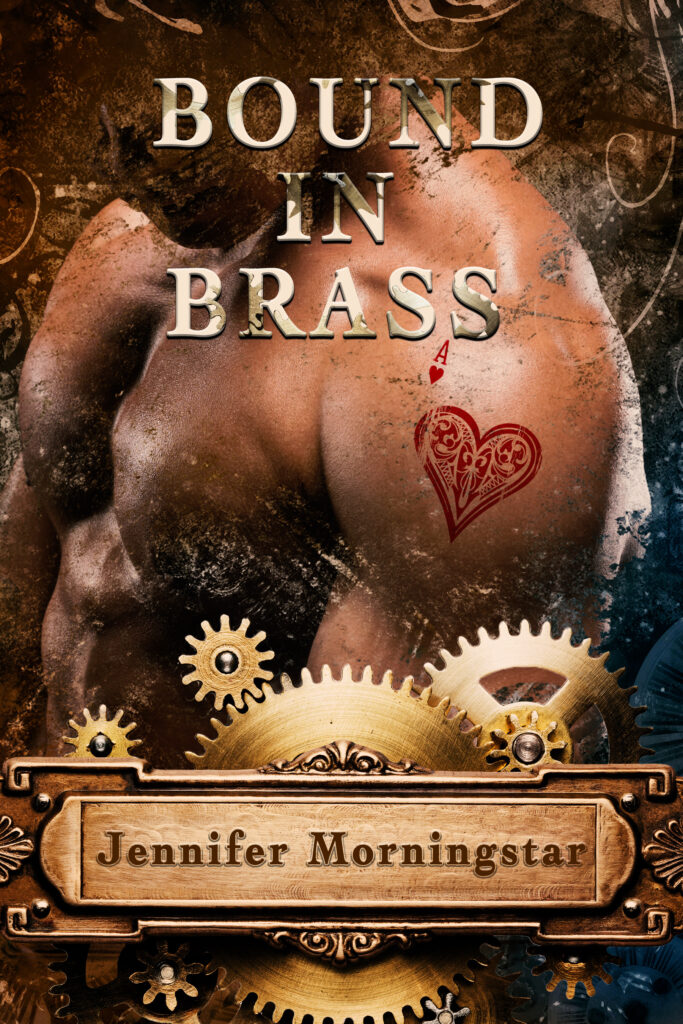 Tallulah Applewhite is an American widow abroad, finding all the pleasures Europe has to offer. She gets more than she bargained for when she ventures into The Two Aces and meets the man known as the Ace of Hearts. Their sexual encounters push her to the very limits of desire, and together they find just what her unhappy marriage was missing.

Horace Sterling has never wanted anything that he couldn’t have, but he’s surprised at how much he wants this fresh Georgia Peach. Uninhibited and alluring, she enflames his passion like no other. The only thing more scandalous than taking up with a widow who should be in mourning would be taking up with a married woman—and both he and Tallulah are in for the shock of their lives…

PRE-ORDER NOW!
Amazon • Smashwords
But wait! There’s more!
In December, Jennifer Morningstar will also republish two steampunk short stories that have been available here and there for the past decade, but which have been out-of-print more than in-print. These will be totally free on YouPorn.com, where you’ll also get exclusive previews of Infernal Devices and Bound in Brass. Don’t want to visit a pornography site? The shorts will be available to purchase on Amazon and Smashwords.
Keep your eyes on the blog for more information as it becomes available (and check this pinned post for the Amazon pre-order links when they become available). I’m so excited to ring in the new year with a new direction, new pen name, and an air of general horniness.
JennyTrout
2 Comments

Hey there everybody! I’m super psyched about my upcoming Urban Fantasy YA coming out with Radish in October! While we’re still eagerly awaiting a cover reveal, do me a big, huge, awesome favor and direct people to the book trailer!

I’m 100% bonkers excited to share this story with everyone!

State Of The Trout: “Now listen to this!”

Even though I’m not a Christian, I had a great Easter this year. My great-grandparents are both gone now (my great-grandmother having died very recently at the age of ninety-eight), and my family decided to have one last holiday at their house before we have to sell it. We had an Easter egg hunt in the woods for the kids, had a big family picture taken in front of the house (with two empty chairs in the front for grandma and grandpa), and sat around watching old home movies. It could have been a sad time, but it was really fun and joyous instead. My great-grandfather once pointed to a photo of our entire, huge family and said, “My marriage license cost me two dollars, and I got my money’s worth!” so I think they would have been very proud to host their family one last time.

With that personal sappiness out of the way, onto the news! And there’s a lot of it today,  so I’m breaking it into sections.

Bride Of The Wolf is available in audio! If you’re an audio reader, you can now pick up this historical paranormal romance, narrated beautifully by Tatiana Sokolov.

First Time is coming to audio! Tantor Media will release both version of First Time on May 31! I’ve heard both narrators, and they’re awesome. Also, in a hilarious coincidence, Ian will be narrated by a guy named Anthony Ferguson. Ah, serendipity. Keep an eye out at Amazon and Audible for those titles.

Speaking of First Time, after continued requests (and formatting issues with the previous volumes), both books of First Time are available in a single paperback now. It’s pricey and big, but it’s available.

But Jenny, what about Second Chance? Well, friends, you’ll be getting a cover reveal and release date news very soon. Stay tuned.

News About Where You Can Meet Jenny In 2016

Atlanta, April 9th I’ll be at the Sheraton Atlanta, at the multi-author signing for The Novel Experience Event. Doors for the signing open at 11 a.m. for the general public, and they close at 4:30 p.m. Come by and say hi!

Chicago, May 21st Okay, kind of a fudge here, it’s not Chicago proper, but Schaumburg. Still, for the number of authors who are going to be there, it’s worth leaving the city. Come see me between 3 p.m. and 5 p.m.

Both of these events are still accepting registration for the entire conference, so if you’re interested in hearing me talk (I’m on a few panels and doing a reading at The Novel Experience Event and a workshop at Chicago Spring Fling) and have a weekend and some cash to spare, I recommend both of these highly.

News Of Interest To Trout Nation:

Our friends at the Peace Corps are collecting funds again. Last year, I posted about the Peace Corps’s “Bro Camp” in the Philippines. The camp aims to teach boys the importance of gender equality, and how to foster healthy, equal relationships. Or, as the volunteer who contacted me put it, to teach boys “not to be Christian Grey.” If this is something you’d be into donating to, you can get more information here.

I totally cheated and shoehorned an entire series into the challenge:

When I started reading this series, I was skeptical. On the one hand, it was incredibly well-written and grabbed me right away. On the other hand, I had so many people whose opinion I trusted who absolutely hated it. The phrase “anti-feminist trash” was used by one of them. And it definitely could have been, considering the entire plot revolves around a The Hunger Games-esque competition for the hand of a prince and the chance for one girl to claw her way up through an unfair caste system. But while I cringed at the characterization of some of the girls (the ubiquitous slut who makes the heroine’s life hell, the ambiguously Asian girl there for family honor), I was pleasantly surprised by how sensitively Cass portrayed the idea of a group of girls competing for one guy without relying on a plot device wherein all the other girls were bitches. In fact, the girls who seem like the biggest threats are the ones I ended up liking the most.

What I did not care for in this series was the indecisiveness of the heroine. In the grand tradition of YA love triangles, the heroine kept one dude on the back burner–despite the fact that the circumstances of the plot made this super dangerous–while pursuing another guy. Plus, the back burner guy was such a douchebag, I couldn’t see for even a second why the heroine would want to be involved with him at all.

While some parts of the series were frustrating, I really enjoyed it, and while I could see where some of the criticisms were coming from, I think this is one of the few series where those issues did get better as the books went on.

A Graphic Novel: Nimona, by Noelle Stevenson. I really enjoyed this one. I loved the way the story blended science fiction, fantasy, and superhero mythos together. It was also kind of deceptive: when I started it, I thought, “okay, this is cute. Title character is annoyingly precocious, could do without that, but still interesting.” By the time I got to the end, that opinion was totally reversed. I mean, it was still cute in places, but the story was remarkably dark beneath the cute, and presented ages-old moral dilemmas in a totally unexpected way. I would recommend this for everybody, but especially for adult fans of Adventure Time.

Well, that’s all the news that’s fit to cram into this post!