Quick rundown of the episode: Meanwhile, where all the fucking losers are, Brutus is in really good spirits for someone who basically knows he’s at the end of his life. Probably because he’s like, fuck it, I’m going to die, we’re not going to beat Octavian, might as well enjoy myself.

In Gaul, Mark Antony and Octavian have agreed on a plan to murder basically anyone who’s ever looked sideways at either of them, so they can seize their money. This includes Cicero, who has to go first because he’s got the most spies. Octavian sends the list of soon-to-be dead men to Vorenus, so his mob guys can do the killing and money collecting, and just for fun, Atia tosses Jocasta’s dad onto the list. Like, literally, just for fun; she doesn’t like Jocasta, so she’s like, you know. Kill her dad (and as an added kick in the teeth, Atia later offers to take Jocasta in once her whole family is dead and she’s been raped). As an added dramatic touch, Antony says Cicero’s hands should be nailed to the senate doors, for old times sake.

At the collegium, Gaia is doing like, the one thing I don’t hate her for, being kind to Vorenus’s children. But he’s not into that; he doesn’t want Gaia giving Vorena the Elder makeup tips. There’s some tension between Gaia and Mascius (I think that’s his name), who is kind of like, her dude. She later tries to get Pullo’s attention, and it’s clear that the only way Gaia can move up in the world is by getting at least one of the important guys to want her.

Speaking of manipulating important guys, one of Vorenus’s enemies sends a real greasy looking fuck to pay attention to Vorena the Elder, for obviously nefarious purposes. He ends up giving her a little straw doll or some shit.

Vorenus tells the collegium dudes like, here, go kill these guys, and hey, use the money for whatever you want to do, but I’m going to look like Good Guy Greg and use the money to feed the poor. To take care of Cicero, Pullo rides out to Cicero’s villa, taking Eirene and Vorenus and the children all out to the country on a murder field trip. Like a gentleman, Pullo asks Cicero if he can take some peaches, before killing Cicero in what has to be the most painful way to get stabbed. Then later that night, Pullo goes and nails Cicero’s hands to the doors.

Because she hasn’t yet figured out that she’ll never be allowed happiness, Octavia and Agrippa start an affair. And the weaselish little poetry guy knows something is up. I don’t like the looks of that guy. Never have.

Timon and his brother have a confrontation in the synagogue due to some ill-defined political drama meant to show us some kind of meaningful progression in Timon’s character. Honestly? I’m more interested in why Timon became who he was when we first met him than in who he’ll become when he abruptly departs the show without any resolution.

Eirene gets pissed when she thinks Pullo is going back into the Army, and tearfully tells him that she’s “preglant.” Pullo is psyched about this news, but like… doesn’t he remember he already has a kid? And that kid is a prince?

My favorite part of the episode: Titus Pullo, Gentleman Assassin. Although “You might not want to watch this,” is not the thing you want to hear right before you get murdered.

My least favorite part of the episode: I take issue with the fact that the only character coded as being a person of color* is a sexually aggressive manipulator. She only gets like, one nice thing to do, and that’s be kind to the children. I think this episode is the only time.

*(I say coded, as I don’t know the actress’s ethnicity, but the character has dreadlocks and a light brown complexion) 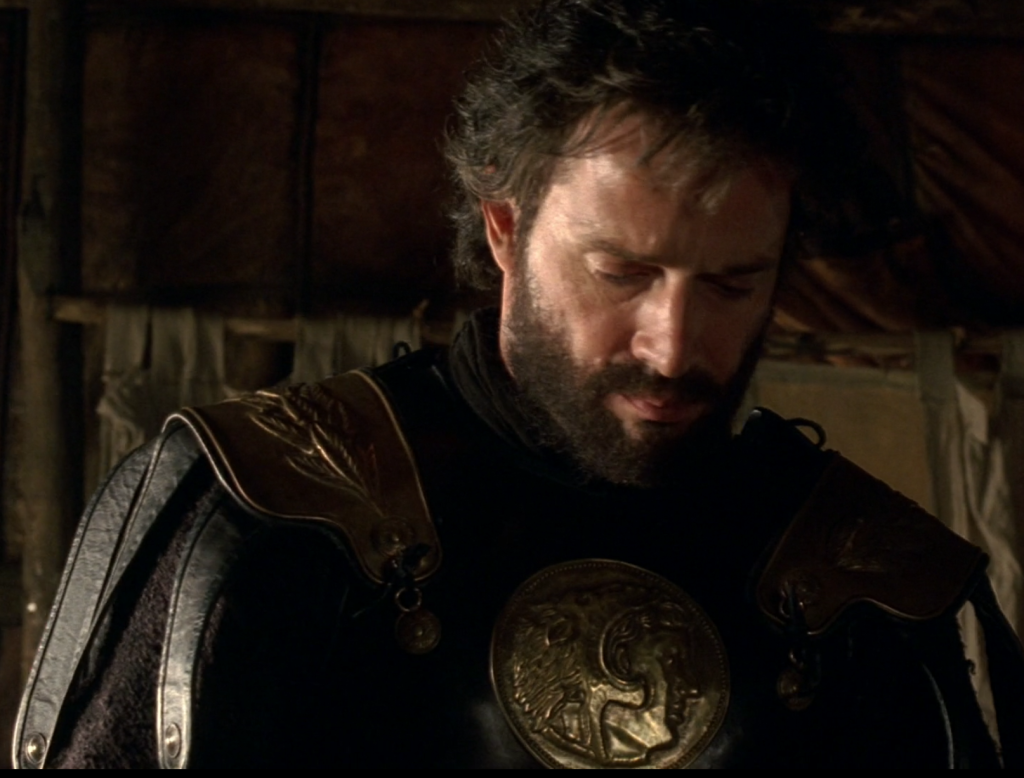 Team Atia or Team Servilia: Doesn’t really apply this week, as Servillia isn’t in the episode.

What hairdo or costume would Bronwyn steal? Eirene’s green dress.

Guess Jess’s head canon. I think this week was a little bit of a drought in the ho yay department, actually.

Now go check out Bronwyn’s post, as Jess’s post is pending due to injury, and join us Monday at 9 PM EST for season two, episode seven, “Death Mask”. Tweet to #LegionXIII to join us!