#LegionXIII Rome Watch Along S02E04 “Testudo et Lepus” or “This whole rivalry thing has gotten out of hand. That goes for all of you.”

Quick rundown of the episode: So, remember when Atia was about to get served some poisoned soup? The kitchen girl helps herself to a little taste as she’s carrying it in, and all that saves Atia is her love of music and her inability to multi-task. Atia is so entranced by the girl’s singing that the spoon doesn’t make it all the way to her mouth before she drops dead. Servilia’s assassin sees that he’s fucked things up, but he doesn’t get away. Octavia and her new friend Jocasta come home to find Timon torturing a confession out of the assassin. Because a confession wasn’t considered legal under Roman law unless torture was involved. He gives up the info quick, and Atia has what she needs to murder Servilia.

Timon is having a rough time at home. His brother is acting like he’s man of the house and laying down edicts like, “don’t come home bathed in blood” and shit. Fuck that guy. But the longer he’s around, the more Timon’s conscience is acting up.

Pullo travels north to get Vorenus, who’s part of Antony’s floundering military campaign against Octavian. He even checks some dead bodies to make sure they’re not Vorenus, because there are dead bodies all over the place. Who should happen to come along but Octavian, played by an entirely different actor who looks absolutely nothing like the old one at all. Either that, or the war was so hard it turned him ginger. He tells Pullo where he can find Antony’s camp, and that they’ll comb through the dead bodies again and see if Vorenus isn’t in there somewhere.

Octavian is doing good, and he wants a party in Rome to welcome him home. He sends Agrippa back to take a letter to Octavia–and not to Atia, a noted mail thief–, and Agrippa is all about going there because he’s got a crush on Octavia. Octavian gives a rousing speech to his men, too, which is surprising given his utter lack of charisma.

Pullo finds Vorenus marching with the losers. Mark Antony is getting some battle embroidery and deciding on the best way to run away. Posca is like, you should probably just surrender, and Antony is like, nah, let’s winter in the Alpines. When Vorenus is like, hey, my dead kids aren’t dead, Antony lets him leave. Probably because he’ll be one less person to feed in the mountains in the winter.

So, Servilia is at some kind of shrine, looking like the Virgin Mary, when Atia’s men kidnap her. Atia is done playing games. She throws that “slow, painful death” thing from season one right back into Servilia’s face. Atia has Servilia gang raped, scourged, and tortured, but Timon balks when he’s commanded to cut off Servilia’s face. He lets her go, then attacks Atia, choking her and telling her he isn’t an animal. Servilia stumbles into the street, her face all bloody, and Atia just sits there like, man, what did I do wrong? Because Bond movies haven’t been invented yet and she didn’t know you weren’t supposed to do the prolonged death scene.

Vorenus and Pullo hit the road to find the children, and Pullo has to be the sense of the operation, planning for things like rest and food and not riding their horses to death. Pullo warns Vorenus that the slave camp the kids are in is going to be rough. Pullo knows, because he’s been to a slave camp; he doesn’t specifically say why, but you get the feeling from the way he almost bursts into tears that it wasn’t for any good reason. He also asks Vorenus to reconsider killing Niobe’s son.

Agrippa arrives in Rome and tells Octavia and Atia that Octavian has actually won, but it’s bittersweet for Atia, because that means Mark Antony lost. Agrippa also goes to Cicero to ask for that triumph thing, and Cicero tells him exactly what he thinks of Octavian. Because Cicero is finished with this whole Rome thing.

As it turns out, the camp is just as bad as Pullo says it’s going to be, with people getting worked to death and crucified and shit. They find Vorena the Younger and the little boy working in a kitchen. Vorenus breaks down and hugs the little boy, so it’s like, okay, he’s not going to murder him anymore. They find that Vorena the Elder is a sex slave. Vorenus puts his knife through the back of the main slave manager dude’s head and he and Pullo take the children out of there.

My favorite part of the episode: This episode is so dark, my favorite moment is the only light-hearted one in it, when Agrippa tries out a line on Octavia and she shoots him down immediately by asking if her brother is eating well.

My least favorite part of the episode: The clumsy way they introduced the new actor playing Octavian by making him act like he and Pullo were BFFs back in Rome.

Favorite costume: Not the best picture, but I loved Atia’s torture dress. It’s so slinky and it has such great flow. 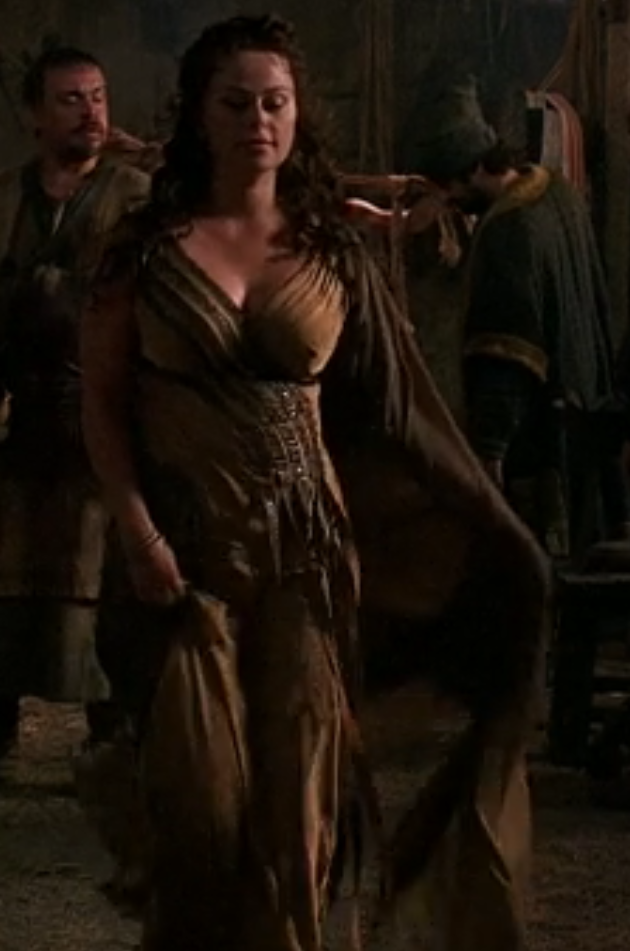 Team Atia or Team Servilia: This one is tough, because I don’t really want to be like, “Yay, it’s totally cool to have your enemies gang raped,” but I do very much admire the fact that Atia was more hands-on than Servilia was in terms of her attempted murder. Servilia hired someone to poison her, probably so she wouldn’t get found out. Atia, on the other hand, planned what she was going to say at her inevitable murder trial.

“My soul has burned-“
“Is my brother eating properly?” Good job with that brush off, Octavia. #LegionXIII

What hairdo or costume would Bronwyn steal? I guarantee she loved Octavia’s watercolor/tie dye dress: 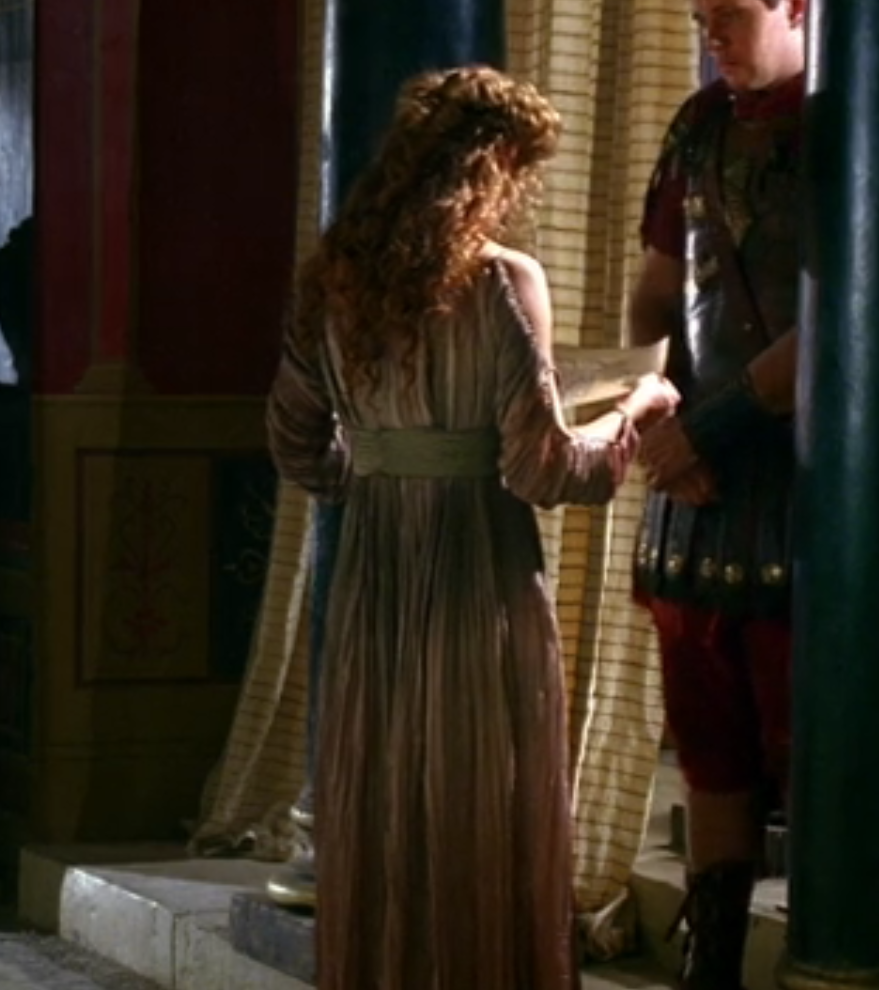 Guess Jess’s head canon. The boys are back together, and Jess was definitely thrilled when Pullo’s advice led to a change of heart for Vorenus regarding Niobe’s son.

Now go check out Bronwyn’s and Jess’s posts, and join us Monday at 9 PM EST for season two, episode four, “Testudo et Lepus”. Tweet to #LegionXIII to join us!