DON’T DO THIS, EVER (An advice column for writers): Dudley Dursley edition

Believe it or not, one of the questions I’m most often asked by people who don’t already know that I know absolutely nothing is, “Do you have you any advice for someone who wants to be/is a writer?” I’m the worst person to ask. Everything I have in my writing career, I got by falling into it ass backwards. Sure, I’ve worked hard for a long time, but to be honest, most of that work has been pointed firmly in the wrong direction. Then fate or some cosmic entity sees me struggling like a wind-up toy in a corner, and it’s like, “Awww. That’s really sad for her. You know what? Let’s just turn her around.” Something just happens, and I’ve arrived at some goal or achievement I feel I’ve done very little to earn. So, I don’t generally have any advice as to how to be a successful writer. Also, I have very little social media savvy. I talked about cutting my vulva with a pair of scissors on my twitter feed last week (@Jenny_Trout, in case you want in on all the vulva-maiming action).

I am a gossipy little streak of nonsense, though, so allow me to use someone else’s drama to craft some advice for you. Or, like Willam Belli says, “I’m going to teach you how to be better, through the faults of others.”

An author wasn’t happy the week that her latest book released: 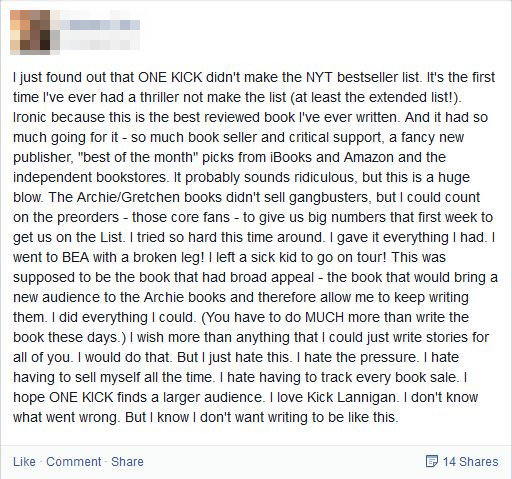 Writers, and I’m gonna be real here, especially female writers, have a really rough time balancing work and family pressures. I know that even though I’m the primary income in my household, my job is the one that’s most flexible and doesn’t require me to leave the house, so it’s always going to fall to me to make dinner, keep things straight for school, do the bills, do the phone calls, let the dogs out, give the kids baths, etc. It’s not that my husband is just too big and manly to help out, but he works a weird schedule and his job is pretty stressful, too. He’s always tired, he’s always asleep when the rest of the world is going on, so it falls to the person who is conscious (mostly) to do a lot of this stuff. And yes, the pressure is overwhelming when you’re sitting there, cooking a grilled cheese, and you know that you have a ton of work waiting for you in the next room, but your co-parent can’t exactly tell his job, “Hey, I’m going to need to leave for an hour so I can go make my kids’ dinner because my wife needs a solid eight hours to work.” It sucks so, so much to work from home, in this aspect.

So, I understand Author’s frustration at having to leave a sick kid to go on a book tour. I missed my kids so much on a two-day tour that my husband had to drive to Columbus, OH to get me, because I was a wreck. I know it must have sucked to go to a huge, mentally and emotionally draining expo when she wasn’t a hundred percent. That must have really sucked, and I know, believe me, I know, what it feels like when you work hard on something and it doesn’t do as well as you’d like it to (See also: Jenny’s entire career, 2009 to 2012). But there are a couple different reasons why authors cannot put out a message like this.

One of those reasons is that, wow. It sounds extremely entitled, doesn’t it? I’m not the only blogger to think so. In fact, I found out about this whole kerfuffle from Tez Miller’s blog. I’m linking because I don’t want you guys to think I’m straight up stealing her post when I now go on to say basically every single thing she already said. The reason our opinions are going to line up so neatly is because, well. Common sense.

The first mistake Author made was announcing that her book didn’t achieve list placement. Just a heads up: you don’t ever have to tell anyone how your book is performing. Ever. None of her readers would have noticed the book didn’t place, unless they’re particularly interested in the list placement of every author they’ve read. In fact, the first time you make a list, you get to keep saying, “Blabbity Blah Bestselling Author” for the rest of your career from the very first time you get placement, and pretty much everyone keeps on assuming all your books are bestsellers because of that. Seriously, I’m “USA Today Bestselling Author” Jenny Trout, because one book that came out in 2006 made the list one week and then dropped off and nothing of mine ever sold that well again. You just throw the title around and everyone assumes things are fine. The only people who notice that you’re not making a list is your publisher, your agent, and any of your particularly dedicated adversaries. But if you feel like being real about how a book is doing, you can. Nobody’s stopping you. Just know that you don’t have to.

If you are going to say something about your book not selling well, you might want to go with, “I’m disappointed that this book isn’t doing better, because I was really enthusiastic about it. Oh well, I hope everyone who’s reading it enjoys it!” I have heard from some readers that this kind of thing makes them uncomfortable; I’ll often refer to my fantasy series as “the one nobody read,” and I suppose that can come off a little ungrateful. After all, what about the people who did read it? Are they chopped liver? On the other hand, as someone who thrives on thinking I’ve got access to something secret, I love hearing that I’m a part of something obscure, so I guess it could go either way.

But what Author does here isn’t just, “Oh, my book isn’t performing the way I’d like it to.” She blames her readers for not pre-ordering. She can’t “count” on her loyal readers to boost her numbers and assure list placement anymore, and that’s why she’s disheartened with writing. That seems unfair, and that was her second mistake.  The people Author has a real issue with here are the people who aren’t buying her book. So why shit on the people who did buy it, by accusing them of not delivering on the promise the author assumed the readers have made? Why tell “core fans” that they’ve let you down, instead of saying, “Hey, thanks for buying and enjoying my latest book?”

The third mistake Author made here was to mention that all of her previous thrillers had made the NYT list. As in… none of her thrillers had ever not become New York Times Bestsellers. It is at this point, dear readers, that the patience of pretty much any author would wear thin. Making the New York Times Bestseller list is a dream of every novelist. If they say it isn’t, they’re lying. Everyone who says, “I don’t really care about list placement,” is going to be on the phone with every member of their extended family, their graduating class, and their dentist’s office staff within minutes of hearing that they placed on the list. People go their entire careers without ever getting close to the NYT. It is the very definition of “brass ring” for genre fiction authors. If the worst thing happening in your career is one of your books not making the New York Times Bestsellers list when all the ones before it did, you might wanna reframe your complaint. This comes off a little like Dudley Dursley counting his birthday presents. Or, as one twitter user put it, “But I ALWAYS win first place!”

She goes on to say that those thrillers that did make the NYT “didn’t sell gangbusters.” But they made the New York Times bestseller list. Here’s another tip: keep your career in perspective. You’re always going to feel like you’re not doing well enough, or that you could be selling better. That’s called insecurity, and if you’re a writer, well, congratulations, you have a wealth of it. If your books are becoming New York Times bestsellers, they’re selling well. Unless every other book under you on that list had extremely bad sales all at once, trust me. Your book is selling just fine.

The last tip I want to impart here is, don’t threaten to withhold from your readers. Whether Author intended to or not, she implied that she wouldn’t continue writing her series unless her fan base pre-ordered and got her on a list. And that’s crappy. It’s crappy when an author doesn’t finish a series, anyway–and I should know; I have two unfinished series out there, mea culpa–but it’s extra super crappy when an author claims their bestselling series is in danger because readers aren’t doing enough to directly benefit the author’s wallet.

So, if you’re a writer, or plan on being one, there’s some advice. Do not blast your readers on social media for getting you thirty-six presents this year instead of thirty-seven. And if you do… avoid zoos.