Welcome to the weirdest story that I finally have permission to share. The family lore almost as freaky, at least, to me, as our old haunted house. The story I promised on Twitter in the middle of the night when I was watching that Waco miniseries. That’s right. Seventeen-year-old has given his blessing. I am allowed to tell you…

When my now seventeen-year-old turned about three, we were on an errand to the post office. He couldn’t read. He pointed to the sign warning that firearms can’t be carried in the building and said, “That means you can’t have a gun in the post office.” Since there’s a picture of a gun with a slashed red circle over it, I didn’t think it was that weird that he got the gist of it. Then he said, “It’s that way in Texas, too.”

I decided to play along. “Is it?” After all, he knew Texas existed; he had aunts and uncles who lived there.

He went on, “It was that way when I lived there a long time ago.”

“When was that?” I asked because it was keeping him from being wild in the post office.

“Oh, a long time ago,” he informed me sagely. “Like six weeks ago.”

We did our post office business and got into the car, where he continued on the subject. “If you have guns in Texas the bad guys will shoot you. I got in a shootout.”

Obviously, he’d seen a cowboy movie or something. “Well, it’s a good thing you’re okay,” I told him.

This went on for a long time. A really, really long time. Longer than six weeks. All the way into Kindergarten where at six-years-old he made a book about himself. The teacher printed out the pages. It was up to my kid to fill out the answers, with my help, and bring it back to be made into a real, bound book with laminated covers. 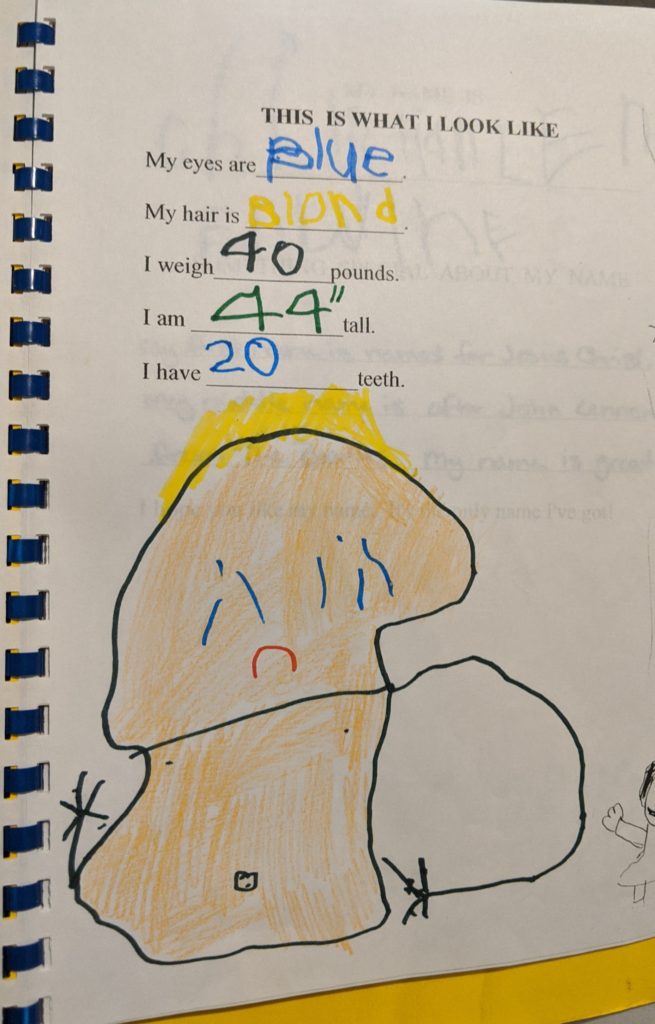 With absolutely zero prompting, my kid drew a picture of himself, naked and crying, in this project we had to turn back in to be made into a keepsake. So, that was going to be a fun CPS visit (his teacher later told me that he’d explained it was a picture of being at the doctor’s office, where one usually gets measured and weighed).

But that was nothing compared to the disturbing thing that happened when we got to the page about vacations: 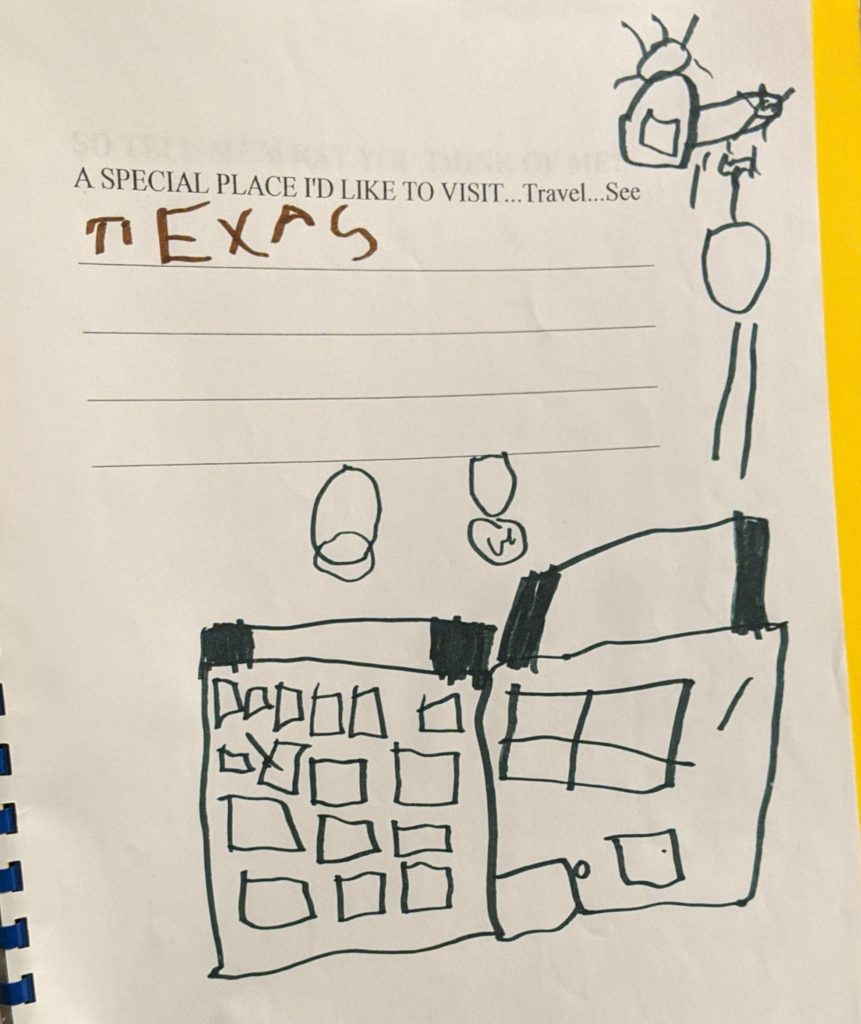 “Wow,” I said when he showed me the picture. “What’s happening here?”

“And…what’s the helicopter?” I asked, getting serious creepy-crawlies.

“That’s when the shoot out happened.”

The shoot out, he explained, happened when helicopters came and people shot guns into the house. There are two doors on the front of the building. This was somehow significant to him but at six-years-old he couldn’t quite articulate it so I still have no idea what he meant. There are two hash marks, one indicating a window and another a random spot on the building. Those were important, too, but again he didn’t have any input as to why. But the bottom line was, there were bad guys and helicopters and they shot and exploded his house.

“You are not going to believe what I’m about to send you!” I told Bronwyn Green over the phone. I took a photo of the drawing with my digital camera, put the SD card into my laptop, transferred the file, and emailed it to Bronwyn, all while we were still on the phone with me just saying, “Trust me, I’ll tell you after you see the picture.” Seriously, that’s how much our lives have changed in a decade. THAT was what I had to do to send someone a photo in 2008.

“What would you say that is?” I asked.

“I would say your kid drew a picture of Waco.”

I told her all the stuff he’d said about the bad guys and the fire and the shootout; she’d heard the history of his Texas obsession before. “Is it possible he heard of Waco somewhere and he’s pretending?”

But we couldn’t figure out where a Kindergartener would have just randomly stumbled over shit about Waco, especially without me noticing. It was 2008, it wasn’t really a hot topic, even though I was pretty conservative back then. And even if he had, he’d been talking about the shootout in Texas for years. Complicating the issue, he insisted that it was his house, but that he was a policeman or a sheriff. I don’t know enough about the Branch Davidians to know if there were any former law enforcement who lived there. But it started to feel real past-lifey.

I weighed the pros and cons of showing my kid any Waco pictures because what if that started a conversation that I was in no way freaking prepared to have with a six-year-old when I was just twenty-eight. I settled on showing him a picture of the complex that didn’t have evidence of the raid in any way. I said, “Hey, look at this.”

A few months later, my husband’s cousin in San Antonio got married. Because I’d just had my second child a few months earlier, I stayed home and Mr.Jen took Child the Elder so I wouldn’t have to juggle them both. Of course, the kid was over the moon. Finally, he was going back to Texas, where he used to live before I was his mommy (another weird phrase both of my kids have flung around, weirdly)!

Now, they were nowhere near Waco. They were in San Antonio the whole time. But when they returned, my kid’s obsession with Texas was cured. He wasn’t disappointed in Texas or anything. He’d just been there. Dream realized. Bucket list complete.

When he got older, I mentioned it to him and showed him the picture he’d drawn.

He didn’t remember anything about it.