Merlin Club S02E02: “The Once and Future Queen” or, “Dickbag Redemption”

(This week’s alternate title comes from the file name Bronwyn Green used when she sent me a file of one of my book ideas. So I guess the hero needs work.)

So, here’s a quick rundown of episode two: Arthur throws a hissy fit because the totally unfair power imbalance between him and his men is leading to them not giving him enough of a challenge in skirmish. Probably due to fear of being beheaded for accidentally hurting their future king, but whatever, whatever. Meanwhile, there’s a really scary assassin after Arthur to revenge some dude’s son because Arthur accidentally killed him in a tournament or something. Arthur, Merlin, and Gwen try to pull of this plan where they dress up a random farm dude and pass him off as nobility (something that didn’t totally backfire in season one when they did that,” and Arthur will fight in his armor to prove himself in an anonymous way. Arthur stays at Gwen’s house and he’s basically the worst house guest alive, until Gwen snaps and tells him to stop being such a spoiled brat. There’s also a subplot about cleaning Gaius’s leech tank, which I’m assuming is there because it’s in the actor’s contract to get a certain amount of lines per episode or something, because it’s beyond unimportant. The assassin dude tries to kill Arthur at the tournament, Merlin kills the assassin dude, Arthur lets his stand-in take the glory for his achievement because he actual learns some fucking humility, Arthur and Gwen fall into a love that is literally hopeless.

If I had written this episode, I would have changed: Okay, Arthur doesn’t know about this specific assassination attempt, but he does know that people have tried to kill him at tournaments before. So why would he endanger someone in that way? Tournaments in Camelot mean one thing, and that’s an evil plot. No matter which way you slice it. Neither Arthur, nor Merlin, nor Gwen raise any objection to this stuff before enlisting this dude.

The thing I loved most about this episode: I am the only Arthur/Gwen shipper on the planet. Spare me your feeble Merthur-tinged arguments, for I shall not hear them. I love Gwen and Arthur, so this is one of my favorite episodes, because THIS!:

Also, I LIVE for Uther’s enthusiastic tournament clapping. And when I said I needed a .gif of said clapping, Jess was right there with that .gif, which I will use right now:

You have to hand it to Uther, at least he’s consistent. Because he’s exactly this psyched at every single tournament. And these are like, semi-monthly events at Camelot. So he’s either really into tournaments, or he has some crazy bad short term memory problems.

The thing I hated most about this episode: What is with all the freaking subplots?! Our main plot is the whole Prince and the Pauper thing going on. But aside from that, we also have:

That is too fucking much going on in the episode. TOO MUCH!

Something I never noticed before: Everyone sits way too god damn far away from each other at dinner. 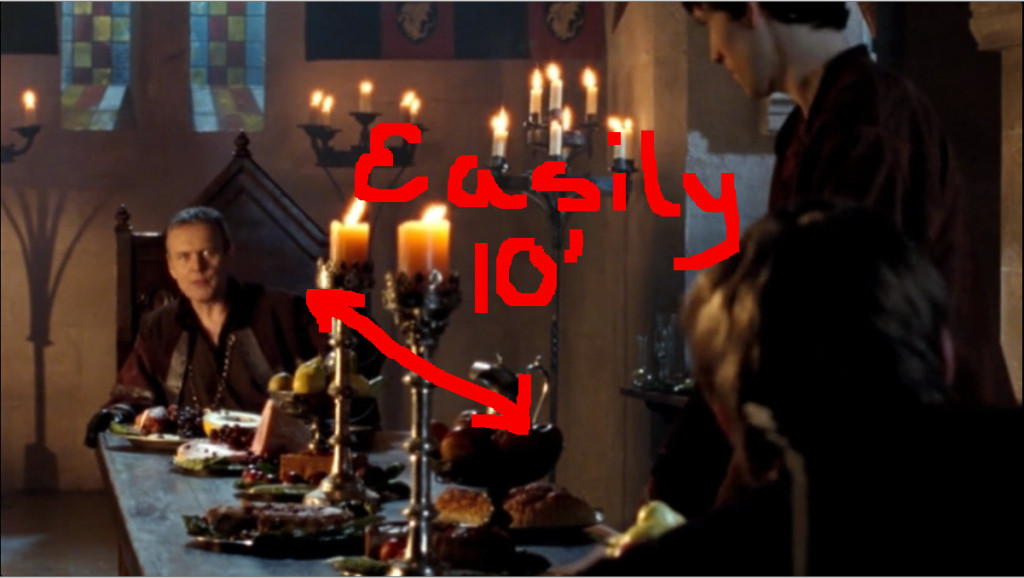 There are two of you at that table. Why not sit slightly closer so that you don’t have to awkwardly converse around those way too tall candle sticks? Also, what is up with the amount of fruit these people eat? This is dinner. This is one meal. Are you really going to eat six apples and five pears between the two of you? That’s madness!

Favorite Costume: Still Gwen’s blue/lavender/whatever dress. I love this dress so much. If I ever cosplay Gwen, this is the dress I will use. But this week, it’s showing up again because of her accessories:

Here is proof of some random headcanon I created: None. At this point, Morgana is starting to become window dressing to sit next to Uther and clap at tournaments. Next week is a Morgana-centric episode, though. Oh, and for those wondering what I’m going to do for headcanon after “The Crystal Cave,” let me assure you, I have some Sir Leon headcanon I can’t wait to share.

What object would Bronwyn steal from this episode? These way too tall candlesticks from the impossibly long dinner table: 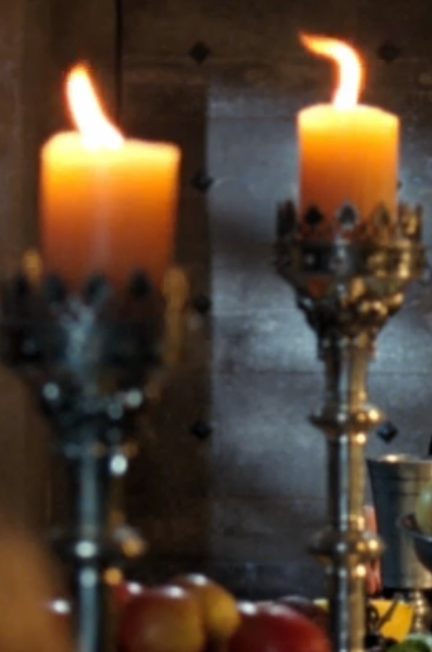 they will go well with her surplus of fruit, should she acquire one.

What Merthur moment did Jess have the naughtiest thoughts about? I’m assuming it’s any of the scenes in which Arthur shows what an utter twat he is to Merlin, and then one day Buttercup comes to realize that when Arthur says, “Polish my armor,” what he really means is, “I love you.”