Quick rundown of the episode: James Purefoy showed his wang.

Okay, other stuff happened, too. Like, for example, Pompey’s group is sitting around in tents, all uncomfortable, while his son, Quintus, skins somebody alive. They learn that the gold they were looking for ran afoul of Caesar’s scouts, but Caesar doesn’t have it, either. Quintus is dispatched to find whoever took the money.

Atia is throwing her uncle a welcome home party, which is a big deal, because she wants to cement her status as first lady of the city. I mean, Caesar is married, but the real threat to Atia is Servilia, because she’s the chick Caesar is passionate about, in an extramarital way. Meanwhile, Octavia has figured out that her mother probably killed her husband.

Lucius Vorenus is getting ready for the grand opening of his grocery store, which involves a lot of praying. Way more praying than I usually run into at parties. But Mark Antony has shit he needs to say, and he needs to say it in the nude. And he shows his wang. And the Lord looked up on it, and he saw that it was good. Antony doesn’t think Vorenus is going to be able to pull off the whole grocery store thing. He offers him a promotion and a bonus to come back to the army, but Vorenus won’t let a bag of gold turn his head.

So, two parties are happening. At one, Servilia and Caesar are seeing each other for the first time in eight years, but they’re playing it cool. Niobe’s sister, Lyde, is trying to play it cool, too, but it’s her husband that Niobe was making out with last week, so some shit clearly went down while Vorenus was away, and it is shit that Lyde cannot keep together at all.

Caesar knows that he has to have the people on his side, and he plans to do that by buying a good sign from the priests. Speaking of religious signs, Lyde gets hammered drunk and knocks over the religious icon that’s supposed to be bringing them good luck or whatever for their business. Niobe is cleaning up the pieces when Quintus Pompey rolls in with his gang. They’re going to cut up Niobe so Vorenus tells them where the stolen gold is. Except, he doesn’t know where it is. And the man who does know where it is gets there at exactly the wrong time. Titus Pullo arrives in a litter, tossing handfuls of gold, with the slave girl from the last episode all dressed up in nice clothes and a shit ton of jewelry. There is a massive brawl, in which Vorenus and Pullo take Quintus hostage. They deliver him to Caesar at Atia’s house. Because having the son of his enemy is a pretty good thing, and since Caesar had no idea there was any missing gold in the first place, he doesn’t punish Pullo for spending some of it. But they do take the rest.

Atia figures out that Servilia is fucking Caesar, and Pullo figures out that Niobe was fucking Lyde’s husband. This is bad news for both Servilia and Lyde’s husband. And Lyde, come to think of it. Pompey gets Caesar’s message telling him to disarm and give up, but Pompey isn’t having it. He thinks he can still win, even without money or like, even being in the city at all. Caesar gets the religious sign he’s paid for, and now Pompey doesn’t even have the will of the people behind him. He’s basically on an extended camping trip for the rest of his life now.

My favorite part of the episode: Atia’s recipe for putting oak in someone’s penis. It’s eating goat testicles. Just in case you were developing a “distinctly feminine anima” and you wanted to correct that or something. Goat testicles.

My least favorite part of the episode: Caesar’s seizure (say that a few times out loud, for funsies) is historically inaccurate. Caesar was definitely a part of the epileptic cool people brigade, but his seizures are recorded as being more like simple or complex partials, not the grand mal he’s shown having. The speed of his recovery from the seizure is also pretty unrealistic. He’s full blown tonic-clonic in one breath, totally functional (albeit out of breath) in the next.

Favorite costume:  Even though nobody is wearing them, Atia’s wigs:

Team Atia or Team Servilia: Servilia. Atia completely humiliated herself with her clumsy manipulation attempts at the party. Step up your game. I know you can do better.

Even back then people were drawing dicks everywhere #LegionXIII

What hairdo or costume would Bronwyn steal? I actually debated on this one, but I think Niobe’s fancy up-do might be the one: 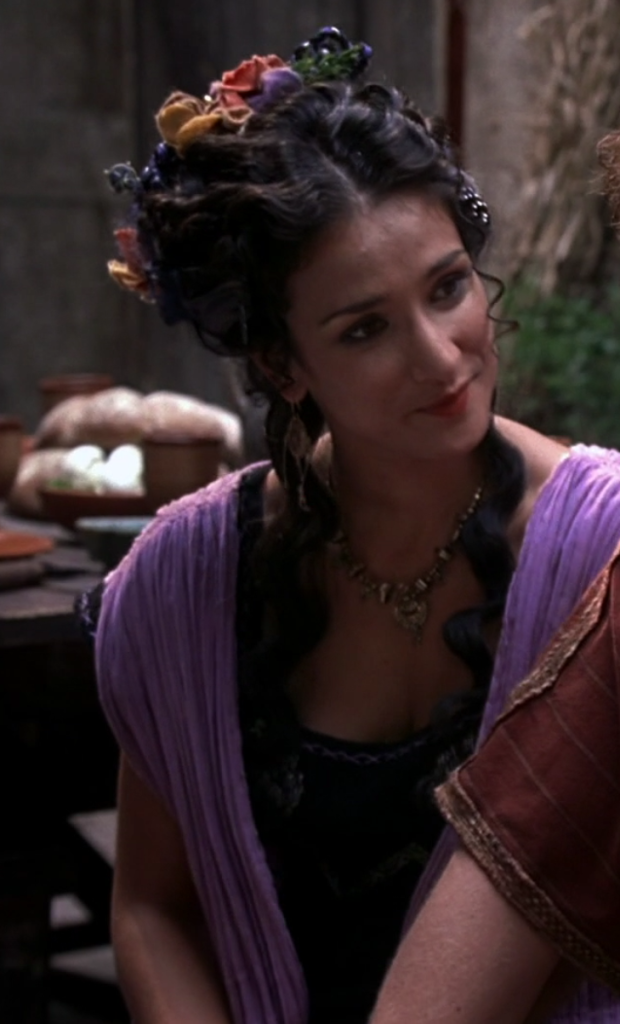 Guess Jess’s head canon. There’s naked Mark Antony and oil wrestling involved. Vorenus may or may not be there. But I think he’s there.

Now go check out Bronwyn’s and Jess’s posts, and join us Monday at 9 PM EST for season one, episode five, “The Ram Has Touched The Wall”. Tweet to #LegionXIII to join us!

Leave a Reply to Rome S01E04: Stealing from Saturn or The One Where James Purefoy is Gloriously Naked | Can You Vague That Up For Me? Cancel reply