So, a few weeks ago someone on Facebook signed my death warrant by posting a link to CandyJar.com, a website that sells bulk candy by the jar. You pick a small, medium, or large “jar” and fill it by selecting “scoops” of the candy you want.

Since candy is my writing fuel and I’m also a shut-in, I decided to give it a shot. No one at CandyJar.com asked me to do this, and I’m not receiving anything in trade for this review, but just heads up, CandyJar.com, I’m really the perfect spokesperson. Email me. 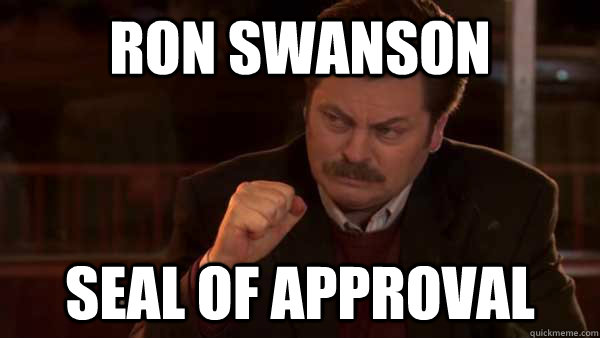 I ordered the large jar. And yes, I was aware at the time that the large is basically one gallon of candy. It says so in the little window where you select your jar size, almost as if in a warning. I did it anyway. It’s not like it showed up and I was surprised by the amount of candy I had ordered. I did this to myself.

The shipping was fairly quick. I think from order to delivery it was something like a week. But I’ll be honest, for me, that was too long. Once I start thinking about candy, I want the candy like, now. So, the shipping is speedy, but if you’re like me, even an Amazon drone wouldn’t be able to deliver sweet, sweet lady sugar faster enough.

I didn’t pay a lot of attention to the details when I ordered, probably because I was so focused on the whole “I’m buying an actual gallon of candy” thing. I didn’t know if I was just going to get a box of candy at the approximate weight, or if there would be an physical jar. The answer was both: 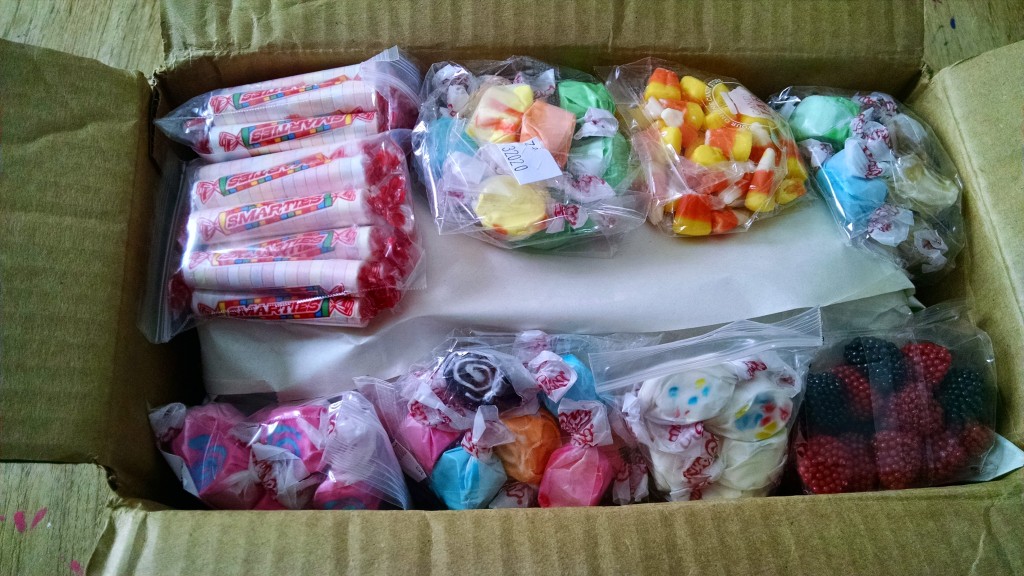 Some of the candy came on top, and the rest came like this:

It’s all wrapped up in neat little bundles inside the jar, which is made out of slightly flexible plastic, like a peanut butter jar, and has a metal screw-top lid. You have the option of keeping it all separate, if you’re too good for candy that’s all mixed together, you snob.

Having ordered candy through the mail before, I know that things can go wrong (for example, I can tell the difference between a broken Zotz and a whole Zotz by feel alone these days). I am happy to report that only one type of candy didn’t quite make the journey in pristine condition: 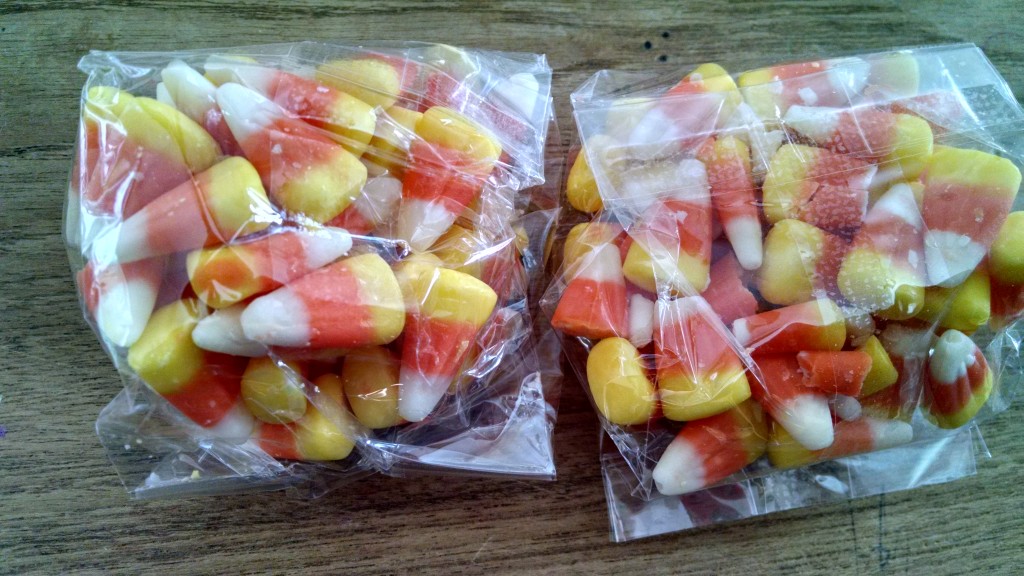 I don’t know how candy corn manages to shatter, but it totally did. The outside was dry and crumbled into pieces, the inside was oddly moist and stuck together. It was really strange, considering the rock candy, the one I was most concerned about, came so perfect that not even a single crystal had broken off: 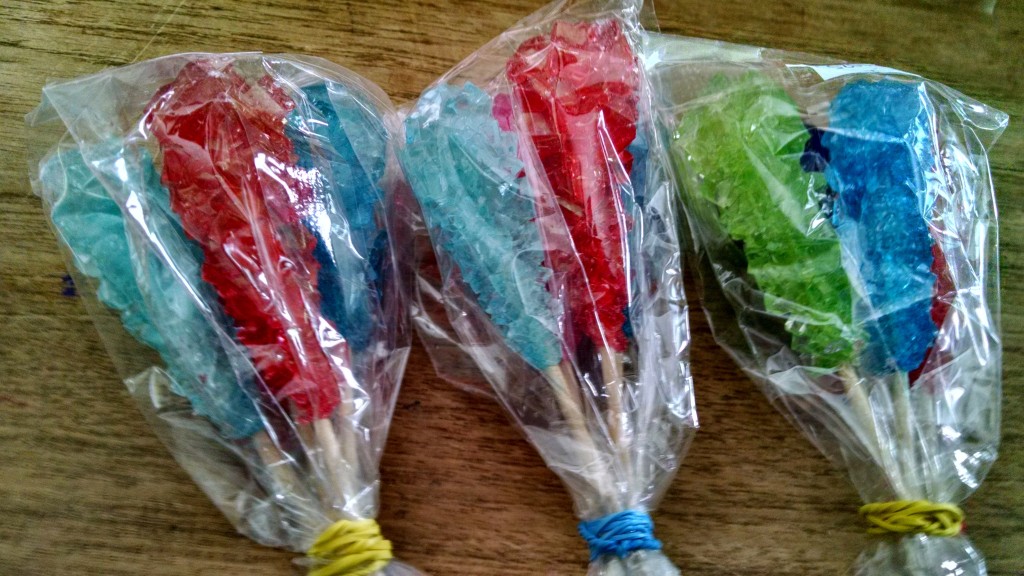 One of the things that confused me about the site was that on some items, I couldn’t tell what, exactly, constituted a “scoop.” For example, I ordered three “scoops” of rock candy, which ended up being equal to three of these bundles (that either had four or five sticks in it, I should have counted). But I ordered five scoops of Chupa Chups and got nine of these: 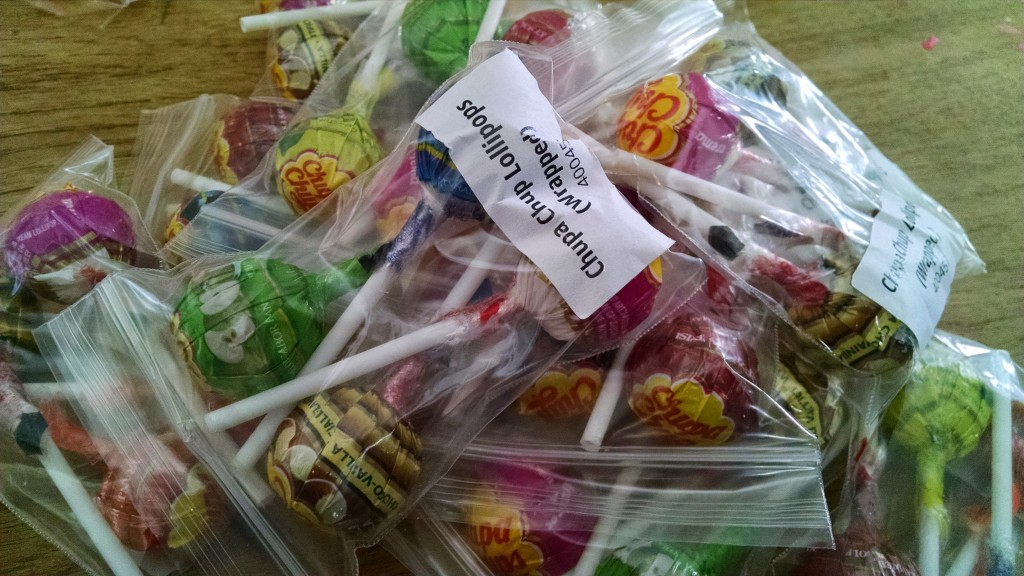 which each had four pieces inside. I mean, I’m not complaining, because I love these (they were absolutely huge in the ’90’s, if you don’t remember. Celebrities were being photographed with them. They were the PinkBerry or Ugg Boots of 1996). But it’s just nice info to have for next time.

I wanted to see if I could indeed fit all of this candy:

into the jar. I’m sure that if I’d bought all gummies or all taffy they would have fit with no problem, but the Pixy Stix threw off the whole groove. Even the Chupa Chups didn’t have a problem playing nice with the other candy, but the Pixy Stix and Smarties just couldn’t fit in with the rest.

I wondered if the price would be worth it ($49.99 USD for the large… I’m not sure what sounds worse, “I bought a gallon of candy,” or “I bought fifty dollars worth of candy.”), and to be honest, I haven’t really researched the prices of these individual items. They definitely don’t have as wide a selection as some bulk candy websites, but you have more control over the amount you can order, so you can get more variety. Most bulk sites are fine if you want to buy 5 lbs. of, say, Zotz, but this gives you a chance to make a customized mix without having to shell out for huge amounts. They do carry chocolate candies, but I didn’t buy those, because I like candy, not chocolate. Get out of here with that chocolate business (although I will eat it occasionally).

All in all, I’m happy with my experience with CandyJar.com. Two thumbs up, will be ordering again. Probably next month. Because I have a real impulse control problem. 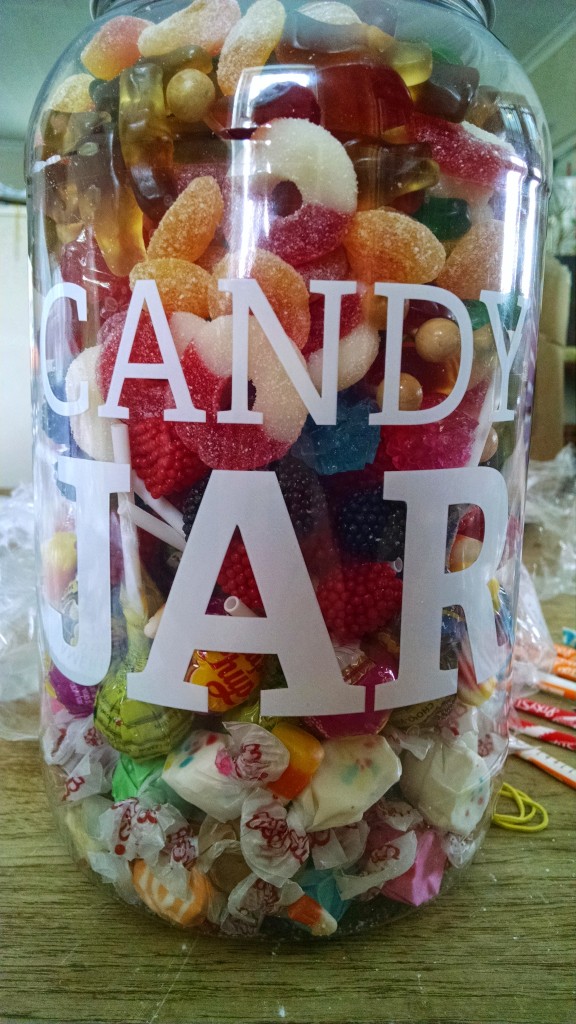