Don’t Do This Ever: “Defending A Sex Offender” edition

CW: This installment of Don’t Do This Ever deals with child sexual abuse and victim blaming.

This week, popular romance author Karen Marie Moning announced on her Facebook page that fan favorite narrator Phil Gigante would return to record the audiobook for Feversong, an upcoming novel in her beloved Fever series. Certain issues prevented him from narrating the most recent book, Feverborn, disappointing fans. It’s a great thing he’s coming back and everyone is happy, right?

Except for the part where “Phil” is Phil Gigante, convicted sex offender and pedophile, and the “issues” that prevented him from narrating Feverborn were a prison sentence followed by house arrest.

Ceilidhann at Bibliodaze covered the full story in depth, so I suggest heading over there and getting “all the details,” to borrow a repugnant phrase from Moning herself, and view a screenshot example of the discourse that followed the announcement. Some readers were overjoyed at the promised return of their favorite narrators, but others raised concerns over Gigante’s continued involvement in the series.

Moning’s initial response, which you can see at Bibliodaze and Red Hot Books, was to defend Gigante. She claimed to have insider knowledge proving his innocence, but has yet to come forth with it. Readers are meant to take her at her word, and ignore the fact that Gigante pled guilty to accosting a minor for immoral purposes, as well as possession of child sexually abusive material, just two of the four felonies he was charged with in the incident. In a plea bargain, Gigante was sentenced to only four months in jail and three months on a tether.

Despite Moning’s assurances of Gigante’s innocence, some readers didn’t back down, resulting in the current state of the post on Moning’s Facebook page: 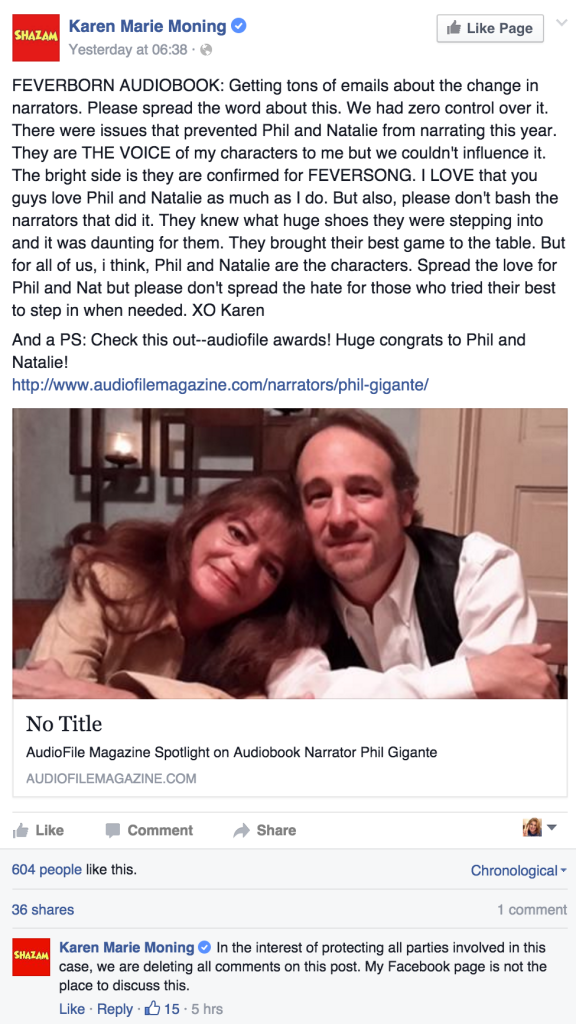 One party Moning doesn’t seem terribly interested in protecting are readers who have survived sexual abuse, either as children or adults. Whether her motivation is driven by loyalty to a friend or desire for the continuing success of her audio titles, Moning is alienating readers who have stayed faithful to her for novel after novel. For some of them, Moning’s books may have provided them an escape during difficult times. How can these readers be expected to continue to support Moning, now that they’ve seen her defend an admitted sexual predator?

It’s not just Moning who’s to blame for victimizing these readers. Many fans still stand on the side of Gigante. They jumped in to hypothesize what “really” happened, from suggesting that the girl came onto Gigante to sharing anecdotes about the ubiquitous “guy I know”, who pops up time and again in stories about predatory teen girls tricking grown men into committing sex crimes. Gigante is, after all, the voice of the romantic hero of their dreams; he’s simply too sexy and beloved to have done such a thing. Never mind the fact that, no matter how sexually forward a teen might be toward an adult, the adult has the responsibility to not engage them. Never mind the fact that Gigante pled guilty to these crimes. Their enjoyment of his narration precludes him from any possible misconduct.

We’ve talked many times on this blog about separating art from an artist and enjoying problematic content or content made by problematic creators. Ceilidhann brings up David Bowie as an example; while celebrated for the impact he had on GLBTQA+ people, he also had sex with minors, a fact that complicated our global mourning for many fans. The conclusion I arrived to with regards to Bowie was that I didn’t have to defend his actions to recognize the enormous influence he had on my life. I’m sure that, for some readers, Moning’s series has had a profound effect on their personal lives, and therefore they’ll continue to read and enjoy the audiobooks. But they can do that without insisting that Gigante didn’t commit a crime, or that his victim was lying. They can do it without arguing with readers who’ve decided to stop reading Moning’s books. They can do it without harming their fellow readers with their victim-blaming rhetoric.

Moning’s defense of Gigante extended much further than simply defending his innocence. She also suggests there might be some kind of conspiracy behind his conviction:

I’m not privy to all the details of Moning’s business arrangements, but she seems to be saying here that she has some power over who is cast for her audiobooks. If she didn’t want the issue discussed on her Facebook page, it would have been so much simpler to just say that she couldn’t comment on Gigante’s legal issues, and that the producer made the casting choice they believed readers wanted. There was no need to argue his innocence or suggest there was any further information she could provide that would make Gigante’s actions acceptable. She did, and in doing so she gave some of her devoted readers license to speculate as to the sexual predations of a fourteen-year-old girl against a grown man. Her actions give her readers who are survivors of assault and abuse the proverbial finger.

In another comment defending Gigante, Moning lies about the crime he was charged with, and specifically states that links proving otherwise will be removed:

Moning claims to want to protect all the parties involved, but she never addressed the rampant speculation and victim blaming that took place on her post, right alongside her own defense of Gigante. Is the fourteen year old girl he sent nude photos to not an involved party? Are the readers who feel tricked or cheated for having purchased books narrated by Gigante not involved? What about fans who would prefer not to support an author who lies to her readers in order to defend a child molester? To the casual observer it seems the only people Moning is interested in protecting are herself, the fans who agree with her and will continue to hand over their money and praise, and Phil Gigante, sex offender.

Authors, if you find yourself in a similar position, you have three choices. You can fight to disassociate your work from the bad actions of the person involved, while sharing disappointment in that person with the fans who are also being let down. Alternately, you can remain neutral, stating that such decisions are out of your control; whether your readers believe this is true is out of your hands. Or, you can defend a man who sent nude photographs to a fourteen year old girl, claim you have some secret knowledge that would excuse what he did, and lie to your readers about the crimes he was charged with. I would hope it goes without saying that the third option is what you should not do, ever.