#LegionXIII Rome watch-along, S01E10 “Triumph” or “It’s hard to come up with funny titles when everything is so goddamn grim”

Quick rundown of the episode: In a final bit of humiliation, Cicero and Brutus go before the senate and say Caesar should be declared emperor of Rome. And Caesar is like, “Cool, thanks. By the way, if any of you fuckers step out of line again, I’ll murder you.”

Servillia is still recovering from the brutal attack by Atia’s men, and Atia stops by to pretend to care and to call Brutus a coward. Also, to invite Servillia to sit with the family at Caesar’s triumph. And Servilia plays the game right back, asking where Octavia went and why. Octavia has joined a cult that encourages self-harm, since, you know. Her girlfriend of two years tricked her into incest. Octavian shows up to take Octavia home, but she doesn’t want to go. This is only the latest incident in which Octavia is made to do something she doesn’t want to because her family’s public appearance is more important than her happiness.

Speaking of people not wanting their kids to be happy, Servilia continues to passive-aggressively remind Brutus that he should have killed himself rather than submit to Caesar. She starts a little book club of traitors with Quintus Pompey and Casius, and even writes a treasonous pamphlet in Brutus’s name. Which, you know, isn’t a great idea. Servilia isn’t so much concerned with restoring the Republic as she is getting back at the Julii, which Brutus points out. But it’s cool, Caesar is fine with Brutus, probably because he recognizes Servilia’s writing after eight years of corresponding via scroll.

Lucius Vorenus has started his political career, and he’s not really very good at it. Posca is trying to do a kind of Pretty Woman thing, trying to turn a soldier into a magistrate, but Niobe isn’t as good at handling the people as Vorenus is. Also, there are hired goons willing to remove hecklers, like at a Trump rally. Pullo, meanwhile, is going through the unemployment blues. He’s been told he can’t march in Caesar’s triumph, which is kind of shitty seeings as how he basically saved Rome and stuff. But he’s got a plan. He’s going to win Eirene’s heart by buying her freedom from slavery, and then he’s going to marry her.

Caesar’s triumph is a big deal. Everyone gathers in the forum to watch Caesar ride in on a chariot with his face all painted with blood, and hey, remember Vercingetorix, king of the Gauls? He’s been in prison this whole time. They tart him up and trot him out to be executed in front of the cheering, happy crowd. If you want to know how they execute him, ride in the backseat of Bronwyn Green’s Saturn Ion with the seatbelt on. That, but then you just get left to rot in the town square.

Pullo buys Eirene’s freedom and goes back to the Aventine to give her the good news and a brand new dress. She’s as happy as he expected her to be. As is the man she’s in love with, another slave in the Vorenus household. Hearing this, Pullo snaps and smashes the guy’s head into a column over and over until he kills him. While Eirene screams and Niobe tries to comfort her, Vorenus scolds Pullo for scaring the children and destroying Vorenus’s property. Vorenus feels disrespected, and he and Pullo nearly come to blows (not that kind, Jess), and Pullo leaves. In a tavern, Erastes Fulmen approaches him and offers him a job, which, you know, is probably not a great offer to take.

My favorite part of the episode: It’s a very small moment, but when Vercingetorix’s body is dumped in the garbage, a small group of Gauls take quietly from the city and build a funeral pyre as a proper sendoff.  It’s pretty touching.

My least favorite part of the episode: Eirene’s screaming after Pullo kills her boyfriend. I dreaded it on this rewatch, and even watching the episode again to write the summary, I muted it. That actress is amazing, because those screams have haunted me since the first time I saw this air on HBO years ago. Like, this scene is Adriana-getting-dragged-out-of-the-car-on-The-Sopranos level haunting for me.

Team Atia or Team Servilia: Servilia. She wrote political propaganda to attack her former lover, and is cooking up a campaign to destroy his whole family. I admire her dedication.

What hairdo or costume would Bronwyn steal? Niobe’s blue stola: 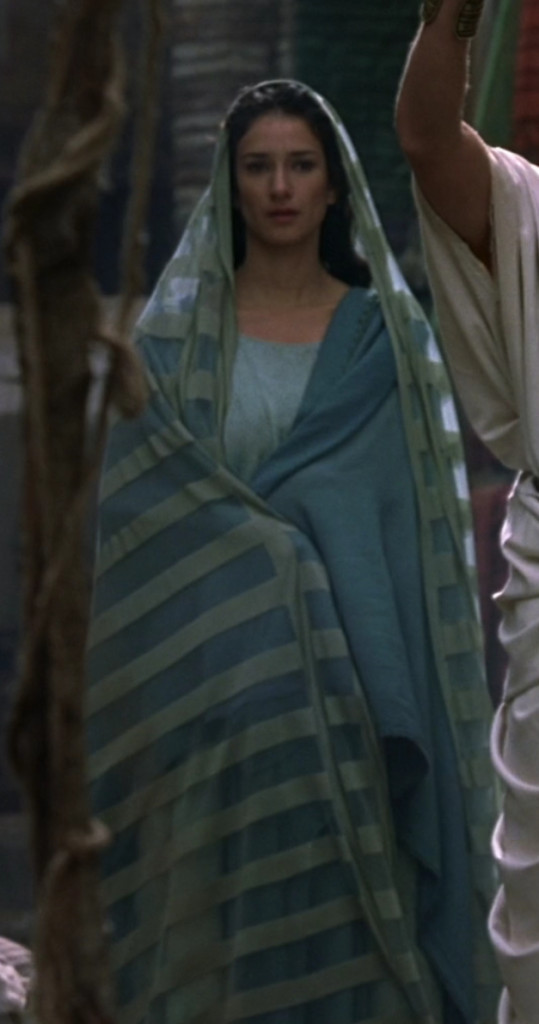 Guess Jess’s head canon. I feel like she’s probably looking forward to the comfort side of some hurt/comfort.

Now go check out Bronwyn’s and Jess’s posts, and join us Monday at 9 PM EST for season one, episode eleven, “The Spoils”. Tweet to #LegionXIII to join us!