I’m back from my Troutcation hiatus! And you’ll note that this post is happening on a Saturday. That’s because I told Bronwyn and Jess that I couldn’t do a #LegionXIII post this week, because I was still on blog vacation. And they were like, “That’s over on Friday, bitch. We’re moving the post to Saturday.”

Quick rundown of the episode: This is the episode where everyone is angry, and everyone deals with that anger in their own, immensely self-destructive ways.

Vorenus’s little “got your head!” trick with Erastes Fulman last week has led to total chaos on the Aventine. Rival gangs are killing each other in the street, and old ladies are warning people away from the Vorenus house. Even Eirene has had it with Vorenus’s shit. She’s worried that she’ll get pregnant with a monster baby if they’re living in a house with a decapitated head just rotting on the floor.

Antony has to meet with Cleopatra, and Atia is not a fan. She doesn’t have a lot to worry about, at the moment, as Cleopatra is in Rome looking for money for her son, Caesar’s heir. Considering the fact that Caesar’s actual heir, Octavian, can’t get one red cent out of his inheritance as long as Antony controls it. When Cleo tells Antony to declare Caesarion Caesar’s legitimate heir, Antony tells her to go fuck herself, and they do not part on good terms. He still has to have dinner with her at Atia’s house, though.

Titus Pullo goes to Mark Antony to ask him for help with Vorenus. Pullo actually describes Vorenus as having “gone awry”, which is my favorite way anyone has ever described a breakdown. I’m going to call all my breakdowns “going awry” from now on. Antony goes full-on Tough Love Jen on Vorenus (Bronwyn knows what this means) and tells Vorenus to either commit suicide or clean up the Aventine and get the gangs under control, since he created that problem.

Speaking of creating problems for one’s self, Antony tells Atia that Cleopatra isn’t really hot or anything, she’s just really plain and mousy. So when Cleo shows up at Atia’s dinner looking hot as fuck, it’s clear that Antony is doing that thing where guys downplay the hotness of a girl they might end up cheating on their girlfriend with later. Queen or not, when Cleo leaves the party, Atia has some words for her. One of them is “trollop”.

Also at the party? Servillia, who has been forced to come to keep up political appearances. Unfortunately, keeping up appearances means that she has to stand there and take all of Atia’s gloating apologies and publicly accept her offer of friendship. Atia cannot, however, murder Servillia as she had planned, so she sends Timon off to his pointless story about his life that goes absolutely nowhere. Basically, it all boils down to Timon is Jewish, but not Jewish enough for his brother, who’s like, some kind of super pious political agitator. This storyline will go nowhere and add nothing to the overall season.

Concord, who is basically the goddess of getting along, is in charge of a parlay. All the rival gang leaders meet with Vorenus, who tells them that he’s in charge now. Nobody wants to commit any kind of violence or anything in front of the statue of Concord, so they don’t attack Vorenus for talking some shit about them and bossing them around. But the thing is, Vorenus doesn’t give a shit about Concord. He talks about sodomizing Concord, then smashes the statue all to pieces in front of the horrified priests and gang members. Then he tells everyone that he’s a son of Hades, and they’re kind of like, okay. We have to do this, because this guy is dangerous.

Back at Atia’s house, a lot of shit is going on. Antony and Atia are fighting about whether or not he fucked Cleo, Octavian and Antony are fighting over Octavian’s money, and Octavia has literally no fucks left to give. She just eats fruit salad and ignores everybody’s drama. Good choice, Octavia.

The thing Octavian wants to do with his money is give away the money Caesar pledged to the plebs. But Antony thinks that’s stupid, so he’s not going to give it to him. Octavian tells Octavia that he plans to take control of Rome from Antony, and she doesn’t take it real seriously.

Pullo warns Vorenus that fucking around with the gods is probably not the best idea. And this is coming from a dude who sat in a sinking boat and told the sea god to suck his cock. But you know what you shouldn’t do, Pullo? Employ some rough-around-the-edges-but-smolderingly-sexy woman to manage the prostitutes in your new mafia brothel.

The news reader guy announces that yay, the plebs are getting their money, and Antony and Atia are freaked the fuck out. They get even more freaked out when Octavian tells him he borrowed millions of whatever denomination of money they use. Shit gets super violent in one of the most uncomfortable scenes I think I’ve ever seen on TV, and Antony nearly kills Octavian. When Atia leaves the scene with Antony, leaving Octavian on the floor, he decides to say fuck it to everyone in his family and runs away to Agrippa’s house. On the way, they pass a wagon full of slaves. And inside are Lyde and the children, alive after all.

My favorite part of the episode: It’s a toss up between Vorenus trashing the sacred statue, the smooth transition between Cleopatra’s double slap of Antony, and Cleo’s expression when she recognizes Titus Pullo.

My least favorite part of the episode: The introduction of Gaia, for reasons that will be clear as the series goes on. But most of all, the introduction of Timon’s story. The reason I dislike it so much is that so much screen time is invested in it, with such little payoff. I will be annoyed by this until the end of the show. I also find that after seeing a full season of Timon killing Atia’s enemies to get the opportunity to fuck her, it’s very difficult to give a damn about him once you find out he’s got a wife and kids he’s deserting to pull all this shit all the time.

Favorite costume: This is such a mob meeting, there’s even a guy in a track suit and gold medallion: 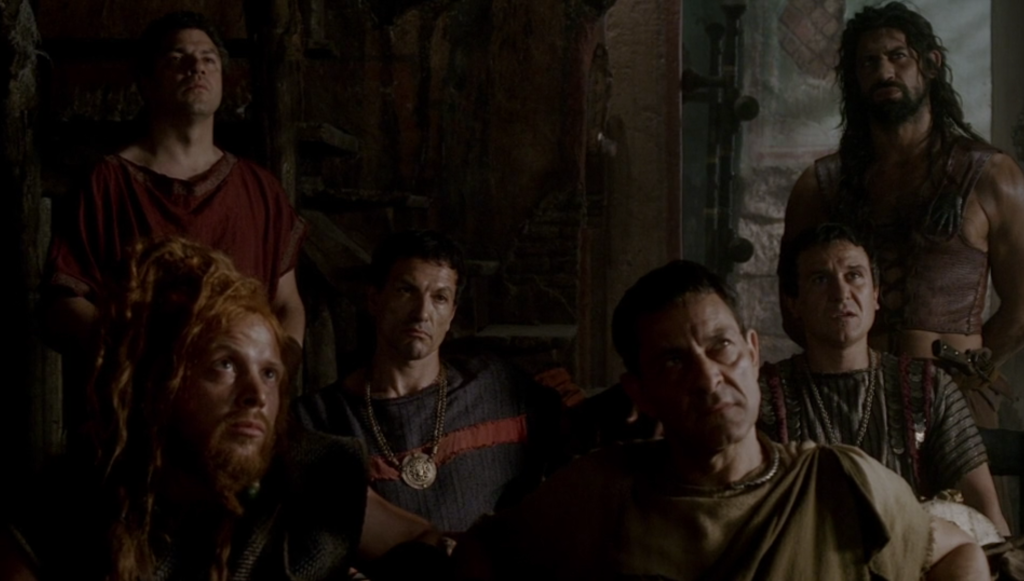 Team Atia or Team Servilia: Atia. She threatened the queen of Egypt, over a guy. That is some brass. 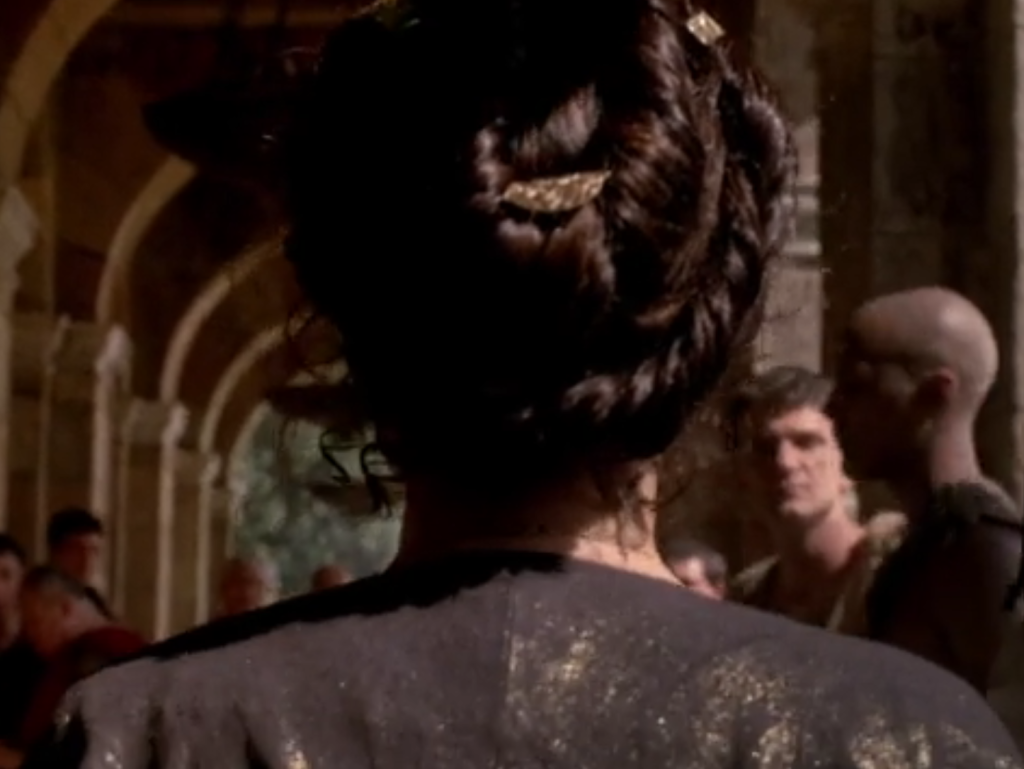 If Bronwyn grows her hair out, I will help her make this hair style. Because I guarantee she covets it.

Guess Jess’s head canon. Two key points for Jess in this episode: When Mark Antony steps up real close behind Vorenus and tells him that he’s his master, which launches yet another ship for the Jarmada (if it hadn’t already sailed), and she got a scene wherein Pullo tenderly cared for Vorenus by shaving his face for him. So much HoYay in this episode!

Now go check out Bronwyn’s and Jess’s posts, and join us Monday at 9 PM EST for season two, episode three, “These Being The Words Of Marcus Tullius Cicero”. Tweet to #LegionXIII to join us!