Troutcation Part 2: “Let’s Just Get This Part Out Of The Way Because I Know You’re All Waiting For It”

Weed tourism and Jamaica have been synonymous for a long time, but cannabis has been decriminalized for less than a year. Really think about that. Less than a year. You could legally smoke weed in Washington before you could legally smoke in Jamaica. Last year, laws went into effect allowing for religious and medical exemptions, and personal use under two ounces was decriminalized, resulting in a ticket and fine. Which, by the way, is awesome, since Rastafarians use cannabis in religious worship and have been trying to get it legalized for years. It was shitty that American tourists could go down to Jamaica and smoke weed on resorts and have no legal repercussions, but Rastafarians who lived there faced religious persecution over it.

Before we went, people were telling us, “Yeah, you’re going to find it everywhere, people on the street will ask you if you want to buy. People at the airport are selling it.” I doubted that highly, but within two hours of arriving, I was rolling a j in my hotel room. Here’s exactly how it happened:

Me: *walking down the beach*
Random guy: “Hello, my friend! Do you have everything you need?”
Me: “Actually…”
Random guy: “Okay, how much do you want to spend?”

And that was it. I just had to go down and dip my feet in the ocean. Be real, real, real sure that you and the person you’re buying from are on the same page, though, because I accidentally almost bought blow. Keep your purchase low-key; it’s still illegal to sell it, and it’s just good weed etiquette to not get someone busted. Also, not everyone selling marijuana is selling other stuff (for example, the aforementioned coke), so don’t make dickish assumptions.

Now, about the price. You’re going to find people on the internet claiming to have bought four pounds of weed for thirty dollars or some shit. Do not expect this. Pot is definitely cheaper in Jamaica, but if you’re buying on a resort beach, you’re going to get charged resort prices. My personal thought on this is that they’re doing you a service by coming to you. Don’t barter. And for god’s sake, tip your dealer. You’d tip a pizza delivery person, right?

“But Jenny,” some of you seasoned stoners might be saying, “the weed in Jamaica just isn’t as good as it is in the U.S.!” This is totally not true. Beach weed in Jamaica doesn’t give you as powerful a high as something named “shark wreck” that you get from a pot shop in Denver, but that doesn’t make it of lower quality. The nameless green I bought had a beautiful, mild high without paranoia. Just a blissful sense of well-being. And my body didn’t feel sluggish; I smoked a joint about as long as my hand before I went snorkeling and never felt tired or like I was going to get in trouble swimming (though I’m a pretty strong swimmer in the first place).

Of course, snorkeling while high is probably not the best idea, so don’t take this as a recommendation. On our second swim out, I saw a fucking huge barracuda and thought, “right on,” instead of, “this is not good and I should leave this part of the reef.” But I also saw a sting ray gliding majestically through the water and thought, “That should be called a sea pancake,” so it was probably worth the danger.

Not everyone in Jamaica is a total stoner, and not everybody is cool with weed. Don’t go into a restaurant and spark up. Don’t be that tourist. I mostly smoked on the beach at night, and on our balcony during the day. And don’t worry, housekeeping is savvy: 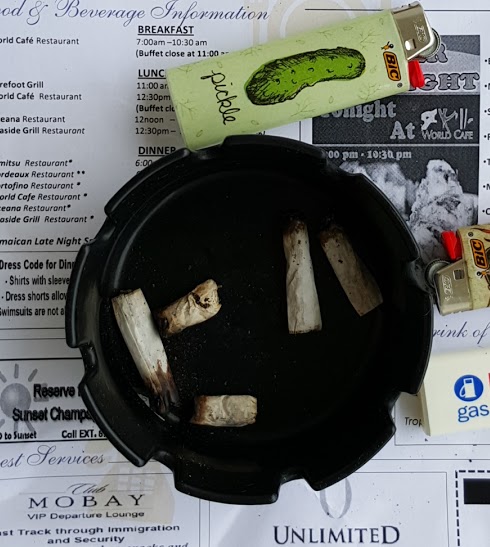 That is a clean ashtray. The housekeeper took the old one, but left our roaches in the clean one. A++ service.

Staying at an all-inclusive resort meant there was never a lack of food for when the munchies came calling. The buffet at the World Café was amazing for this. Smoke up, get hungry, wander into a paradise untold where you could get all sorts of fruits and fruit juices. Which, by the way, is what you’ll probably get the munchies for while you’re there; the combination of the heat and the cotton mouth is going to drive you straight into a pile of fresh pineapple, papaya, and otaheiti apple (which has the consistency of a pear and tastes the way roses smell). Mid-afternoon a guy with a little cart full of coconuts and straws would walk around, if you’re into coconut water. You will, however, give yourself away if you sit down with a plate heaped with pineapple and six or seven glasses of juice.

Basically, smoking weed in Jamaica isn’t all that different than smoking it in the States. It’s just easier to get, a little bit cheaper, and the high is a lot more mellow. I took my own rolling papers and a new, sealed roller in my suitcase. When I returned home, all of that stuff stayed behind. Do not try to bring home any “souvenirs” you’ve smoked out of or rolled with, because customs can give you a big hassle, and you can be busted if residue is found on those items. To be honest, I wouldn’t even chance bringing clean paraphernalia back to the U.S. Get something better. Something classy. Like I did: 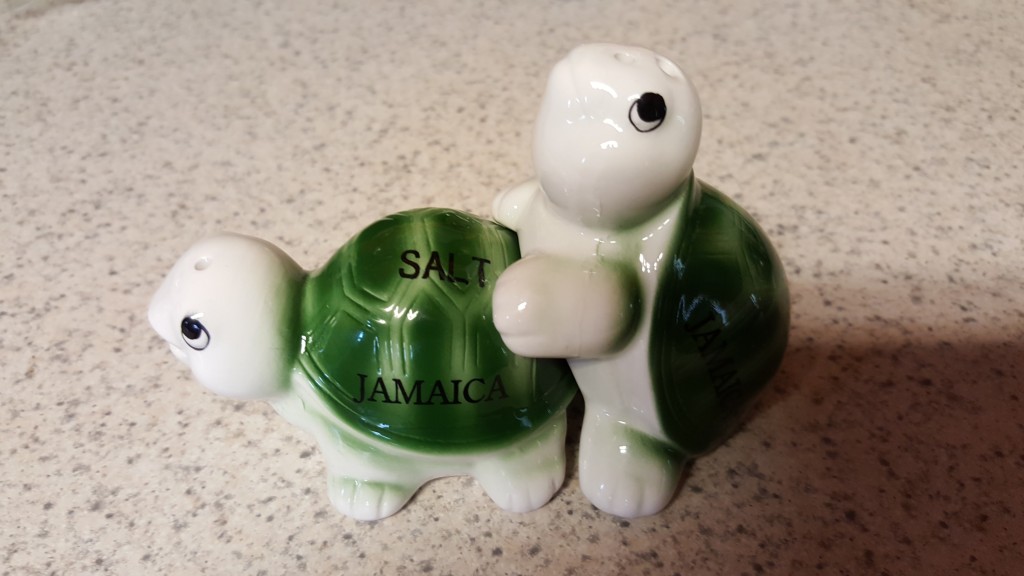