Legion XIII Rome watch-along, “About Your Father” or “At least one character ends up happy. But like, just one.”

Here we are, at the last episode of the entire series. Which, if you check interviews as recent as 2013 with certain cast members, isn’t the end. There’s still talk that Bruno Heller is adapting the series into a movie, or crafting a third season. Which makes the ambiguity at the end of the show make a lot more sense.

Quick rundown of the episode:  Mark Antony’s bid against Octavian has failed. He has literally hit a dead end, because Octavian is going to be coming for Egypt and Antony with murder on his mind. In the forum, the news reader describes the victory, and calls Antony Cleopatra’s slave, and her a witch. So public sentiment has turned, most definitely.

At a dinner party with the mean girls, Livia tells a long, dramatic story about how cowardly Antony is. Octavia is at the point where she hates her brother and his wife so much, she’ll actually defend her husband. Meanwhile, Atia is catatonic with wondering what happened to turn her son into a monster.

Antony promises Octavian that he’ll retire from public life if Octavian promises to let Cleopatra and her kids keep on ruling. Octavian wants nothing short of total surrender, and wants Pullo to convince Vorenus to open the palace so they can storm it, rather than burn it. They need a way to make it clear to Vorenus that the message is coming from Pullo, so Pullo tells them to mention his son, since Vorenus is the only other person who knows that Caesarion is his child. Pullo passes this off as an inside joke.

Which, of course, Octavian rejects totally. He knows he can’t burn down the palace or lay siege to it, so he sends Cleopatra a secret message while Antony kills a palace onlooker who laughs at him when he falls down. Antony asks the dude, “Do I amuse you? Am I a fucking clown?” because apparently Bruno Heller is really into Goodfellas.

The message Octavian sends Cleopatra promises that she, her children, and Egypt will be safe if she hands over Antony, dead or alive. Cleopatra is heartbroken, because she knows betraying Antony is dishonorable. She and Antony make a plan to kill themselves in the morning, because she doesn’t want to die in the dark. Antony decides to spend his last night on Earth drinking with Vorenus and remembering the men they’ve fought with over the years. Antony passes out in the throne room, and when he wakes, Cleopatra’s slave gives him the news that the queen has already killed herself. Antony is despondent. He kills himself by falling on Vorenus’s sword.

Vorenus dresses Antony and places him on the throne, at which point Cleopatra, totally not dead, comes in. Vorenus loses it and tells the queen she’s lucky he doesn’t kill her. He tells her that Octavian is going to take her back to Rome as a trophy, and murder Caesarion. Vorenus tells Cleopatra that he’s going to take Caesarion to his real father to protect him, but she’s like, uh, no, Octavian said everything is cool. But she sends Caesarion with Vorenus, anyway, and they escape the city.

Cleopatra meets with Octavian, who, in a spectacularly cold exchange of fake pleasantries that would make his mama proud, suggests that Cleopatra immediately leave with him to go to Rome. Like, tomorrow. Cleopatra realizes that everything Vorenus says is true; she’s going to be paraded through the forum like a prisoner of war and humiliated. She goes back to the throne room, where she apologizes to Antony’s dead body and commits orgasmic suicide by snake.

I wonder what happens if you want to commit suicide by snake and you can’t get the snake to bite you.

Octavian realizes too late that this might go down, and he should have taken her hostage when he had the chance. By the time they return to the palace, Cleopatra is already dying. With her final breaths, she tells Octavian that he has a rotten soul. Which is the kind of the thing that can shake up even Octavian. It’s worse when he tells Agrippa what she said, and Agrippa doesn’t really argue with that.

Pullo finds Vorenus’s picture of Niobe, and he realizes that Vorenus has taken Caesarion to safety. Still not vibing on the dynamic, Octavian sends Pullo after Vorenus and the boy. Meanwhile, Caesarion is having a real hard time grasping that he’s not royalty anymore. Pullo arrives and breaks the news to the kid that his mom killed herself, in the sensitive manner we’ve all come to expect from Pullo. He and Vorenus plan a route to get Caesarion out of Egypt.

Meanwhile, in Rome, Octavian brings Antony’s kids by Cleopatra to Octavia, like, hey, your husband sired these kids, they’re your problem now. Oh, and by the way, mom, your true love killed himself. Atia pretends to take it well, but obviously she’s destroyed.

In Egypt, Pullo and Vorenus run afoul of some Roman soldiers. They pretend to be grain merchants, but Caesarion blows their cover when he responds to a soldier who calls him “your highness”. Vorenus and Pullo take on the soldiers and kill them all, but Vorenus is seriously wounded. He’s worried he’s going to die, and he tells Pullo to take him back to Rome, because he doesn’t want to die on the Egyptian Road Trip That Never Ends.

Octavian’s triumph is coming up, but Atia is too despondent to go. Octavia reminds her that this triumph is the culmination of a lifetime of political maneuvering and personal manipulation. She tells her mother that

Somehow, Vorenus has survived an entire month with a gut wound. I feel like if you’ve survived for that long, you’re probably going to be fine, but we never find out if he is or not. There is a long, glorious moment in which Pullo and Vorenus hold hands, until Vorena the Elder comes in and kisses her father’s forehead. All the kids come in, and apparently they forgive him.

At the triumph, all the women are lining up. Livia tells Octavia that Octavian will be angry that Atia isn’t there. Livia tells everyone to line up “in order of precedence,” and Atia enters looking like a goddamn black widow spider. She breezes right past Livia, to the head of the processional. Livia tries to put Atia in her place by telling her that the priests say the wife should walk ahead of the mother. To which Atia says, and this is a direct quote, “I don’t give a fuck what the priests say. I’ll not let a vicious little trollop like you walk ahead of me. I go first.” And Livia tries to call her crazy, in the most saccharine way possible. As Octavia looks on proudly, Atia tells her, “You’re swearing now that someday, you’ll destroy me. Remember, far better women than you have sworn to do the same. Go and look for them now.”

And then this shot happens: 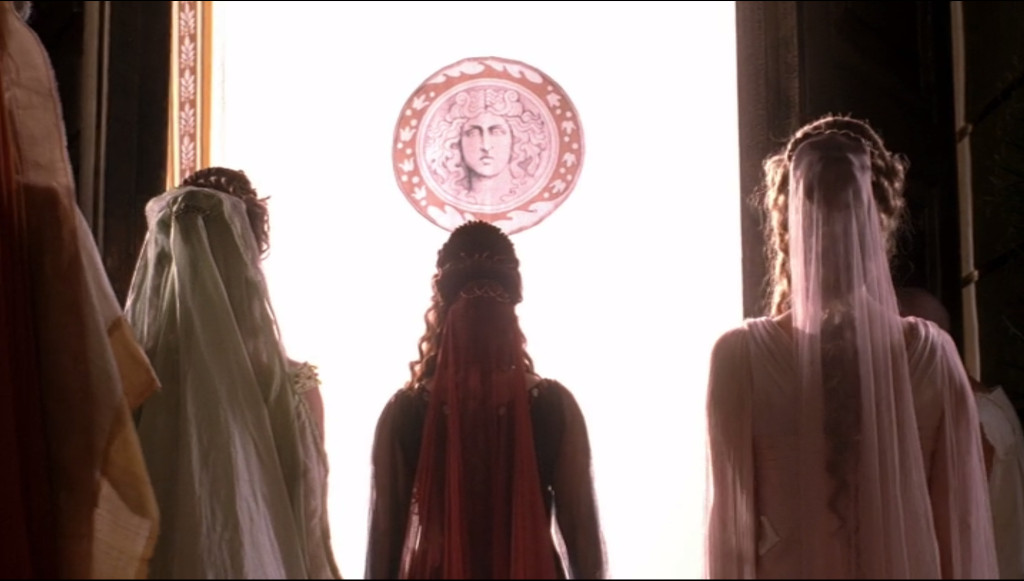 But for as triumphant as Atia is in the moment, she’s totally cold as she watches her son riding into the forum as Caesar. They parade the rotting corpses of Antony and Cleopatra through the streets, and Atia turns to her son, realizing she’s basically worked her entire life to destroy herself and put a monster on the throne.

After the triumph, Pullo goes to Octavian and tells him that he killed Caesarion and meant to bring back the boy’s head, but it was so rotten he had to throw it away. He tells Octavian that Vorenus “didn’t make it”, but since he’s lying about everything else, it’s probably safe to say he’s lying about Vorenus’s death, too. As Pullo walks through the streets with his son, who has vengeance on his mind. He’s going to bring glory back to his father’s name, to which Pullo says, “Listen…about your father.”

And that’s it. That’s the whole series.

My favorite part of the episode: Atia’s bad ass confrontation with Livia. Even after Servillia’s curse, even after losing the love of her life and watching her son turn into a monster and her daughter turn into, well, her, she comes out with her dignity in tact. And that might not seem like much considering how terrible her life is turning out, but to Atia, appearances are more important than anything, so in a way, she’s won.

My least favorite part of the episode: When Cleopatra realizes that Vorenus is right, and she’s now basically Octavian’s slave. I feel so bad for Cleopatra throughout this series, because she’s always on the run or doing something she has to do to keep her country safe. And everything is really sad, because I think she did love Antony, even though she was manipulating him the entire time. Then she has to lose her children

Favorite costume: I have not given enough love to the News Reader, so for this final week, this spot goes to him and his fantastic teal getup. 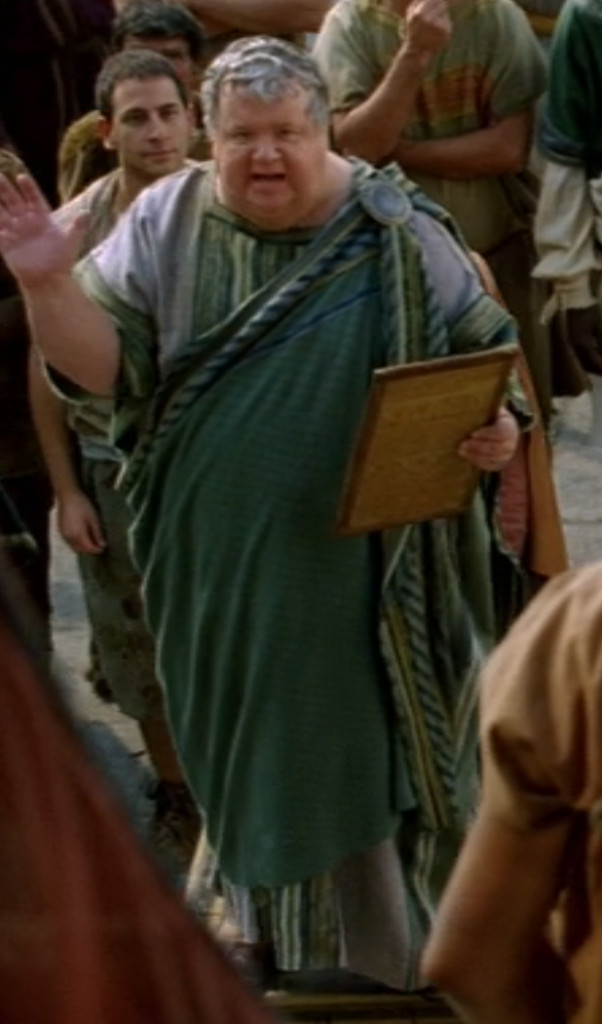 Team Atia or Team Servilia: Atia all the way. She’s classy enough to give a nod to Servilia when she verbally smacks Livia, but confident enough to remind everyone who the real winner is in Rome.

@gfortin_05 So since the show was never renewed, Vorenus is now Schrodinger’s Roman: both dead and alive. #LegionXIII

What hairdo or costume would Bronwyn steal? I’m going to go with Atia’s dress for the triumph, because it seems like the kind of thing Bronwyn would actually wear.

Guess Jess’s head canon. Vorenus doesn’t die. He recovers, and he and Pullo finally realize their love and bisexuality, together.

That’s it for #LegionXIII. Thank you to everyone who joined us on Monday nights for a good time! Now go check out Bronwyn’s post, as Jess’s hand lost a fight to an avocado about halfway through this season.