Don’t Do This, Ever: “Please Stop Scrolling” edition

On Monday, writer Camryn Garrett shared a piece she’d written for MTV News. Her essay, “Black Lives Matter Is The Bare Minimum” poignantly describes the frustration that she, a young black woman, feels when comparing her hopes for the future against the injustices of the present, and her anger at watching civil rights activism reduced to slogans while the oppressive machine of white supremacy grinds on.

So obviously, someone had to run in and take her to task for it.

[NOTE: I’ve omitted Camryn’s tweets here, simply because white supremacists have been out in force, and the last thing I would want is to be the person who led a whole bunch of them angrily into her mentions intent on proving her statements to Nielsen wrong.]

Though Garrett handled Nielsen’s tweets with poise and without coddling Nielsen’s racism, other writers and bloggers stepped in quickly to take Nielsen to task, not just for her racism but because Nielsen is a YA author.

Garrett’s writing speaks for itself; I don’t need to add to that to explain why Nielsen’s racist tirades were unacceptable. But there’s an added dynamic here that further appalls me, and which we’ve seen before. And we saw it play out with Camryn Garrett.

After she wrote a piece for The Huffington Post in 2015 titled “John Green, YA Authors, and Rape Culture”, in which she addressed the YA community’s troubling response to a Tumblr user who likened Green to a creepy dad at a pool party, Garrett became the target of YA authors who felt the need to defend Green. These authors and their lack of self-awareness as they tried to shame and silence Garrett only further proved her point; Nielsen has done likewise with her hateful screed.

Nielsen, for her part, is not a name. Before she deleted her Twitter account, she had less than three hundred followers. I’m sure she felt that Garrett was an easy target. After all, she’s just a teenager. But she’s a teenager with two-thousand followers and a passionate group of authors, readers, and activists who immediately stepped in to set Nielsen straight. They set her so straight that she tweeted a panicked defense:

Dozens of Twitter users were quick to point out that the hacker’s beliefs were bizarrely in line with Nielsen’s own white-tears-and-all-lives-matter POV, as evidenced from other tweets she’d made that day:

She’d also favorited tweets describing Black Lives Matter as a terrorist organization and made other anti-black statements in the days leading up to this incident, which Garrett’s defenders were quick to point out.

It’s easy to find some humor in watching Nielsen’s ham-fisted attempts at damage control. Her claim that she’d “just found out” about the alleged hacking of her account came only two minutes after the “hacker” had sent their last vitriolic tweet at Garrett. In a now-deleted tweet, Nielsen claimed that as a Mormon, she wouldn’t be allowed to use the foul language the “hacker” used, despite her exclamation of “Shit!” in her own tweet. She insisted she’d only started her account a few months before, until another user screencapped racist tweets dating back to 2014, at which point Nielsen desperately pleaded, “Please stop scrolling.” There’s something satisfying and even comical about seeing someone so nasty thoroughly self-destruct, but it made me wonder how many other teenagers Nielsen has gone after.

Nielsen clearly felt safe attacking Garrett. She knew to use Garrett’s age against her. And at no point did Nielsen, a YA author whose targeted readership is made up largely of teens, decide that this behavior was inappropriate. This troubles me deeply. Yes, people were there for Garrett, and the response to Nielsen’s comments came swiftly and decisively. But how many authors like Nielsen are out there? What kind of reader interactions are they having? What are they putting in their stories? And how do we find them and call them out before they come into contact with young readers who may not have the same support system Garrett had?

I wish I knew the answer. I suppose I could end this by saying that Nielsen’s racism, her claim about the hacking, her embarrassing back-pedaling and eventual deletion of her account were something to not do, ever (and they are), but I’m horrified that she even provided us with this example in the first place. I’m angry that she targeted Camryn Garrett, and I’m terrified that next time, this will happen to a teenager who doesn’t have anyone to speak up in support, or that other authors might join in. If black teenagers can’t be assured of safety in the real world or safety on the internet, the very least we in the book community can provide is safety from attacks by the very authors who write for them.

Edit: It’s rare that I have to edit a post before it even goes live, but it seems that Julia Nielsen just can’t stay away from Twitter. She reactivated her account to make amends: 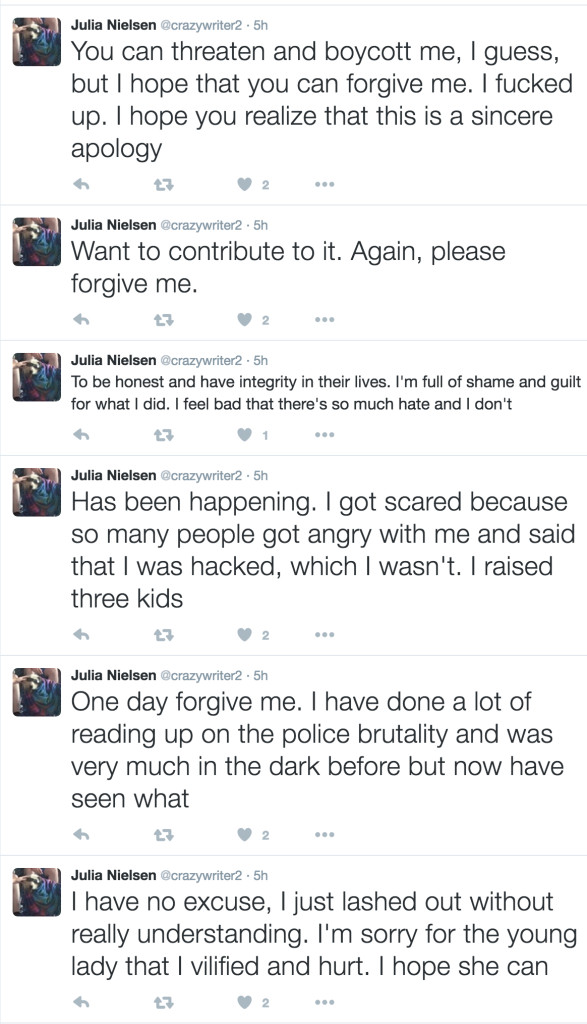 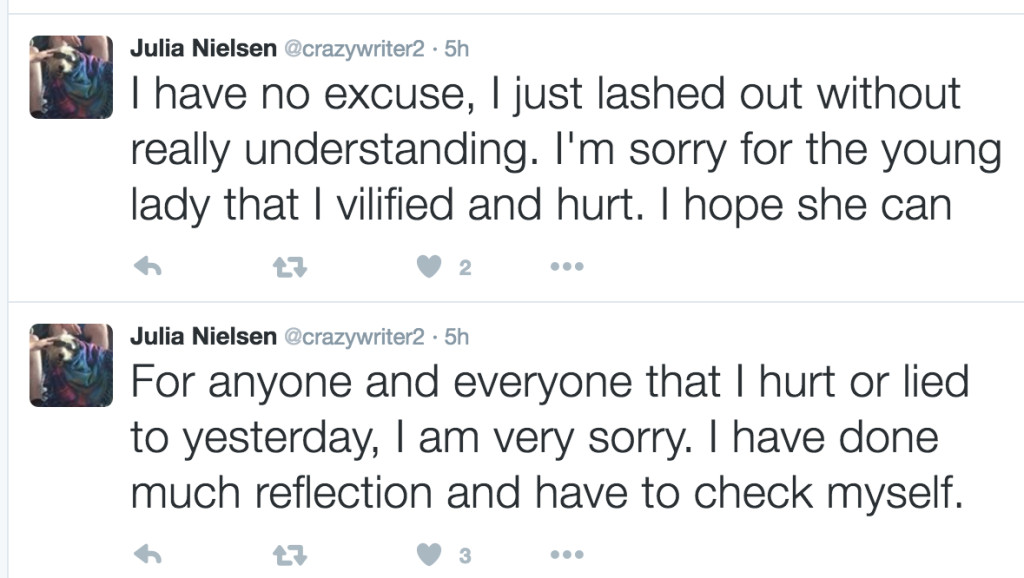 Because of Twitter’s reverse order of postings, I’ll quote her apology in the corrected sequence for easier reading, though I’ll keep the inconsistent punctuation so you can tell where each tweet began and ended:

For anyone and everyone that I hurt or lied to yesterday, I am very sorry. I have done much reflection and have to check myself. I have no excuse, I just lashed out without really understanding. I’m sorry for the young lady that I vilified and hurt. I hope she can One day forgive me. I have done a lot of reading up on the police brutality and was very much in the dark before but now have seen what Has been happening. I got scared because so many people got angry with me and said that I was hacked, which I wasn’t. I raised three kids To be honest and have integrity in their lives. I’m full of shame and guilt for what I did. I feel bad that there’s so much hate and I don’t Want to contribute to it. Again, please forgive me. You can threaten and boycott me, I guess, but I hope that you can forgive me. I fucked up. I hope you realize that this is a sincere apology.

Nielsen’s apology quickly shifts the narrative from her racist attack on a teenage girl to her own values and her desire for forgiveness. She refers to herself twenty-five times. She fails to name Garrett. She also sidesteps the issue of her racism. She’s sorry for lying about being hacked, and wants everyone to know that she raised her children not to lie, but that wasn’t why people wanted an apology. Sure, she did “a lot of reading up on the police brutality” and feels “bad that there’s so much hate,” but she doesn’t actually apologize for her racist attack. Even her apology for the hacking claim is insincere and insufficient. “I got scared,” she says, passing the blame for her actions onto the mean, mean internet people who forced her to lie out of self-preservation.

When her “apology” received an unfavorable reception, she returned twice, hours later, to portray herself as the victim of the situation: 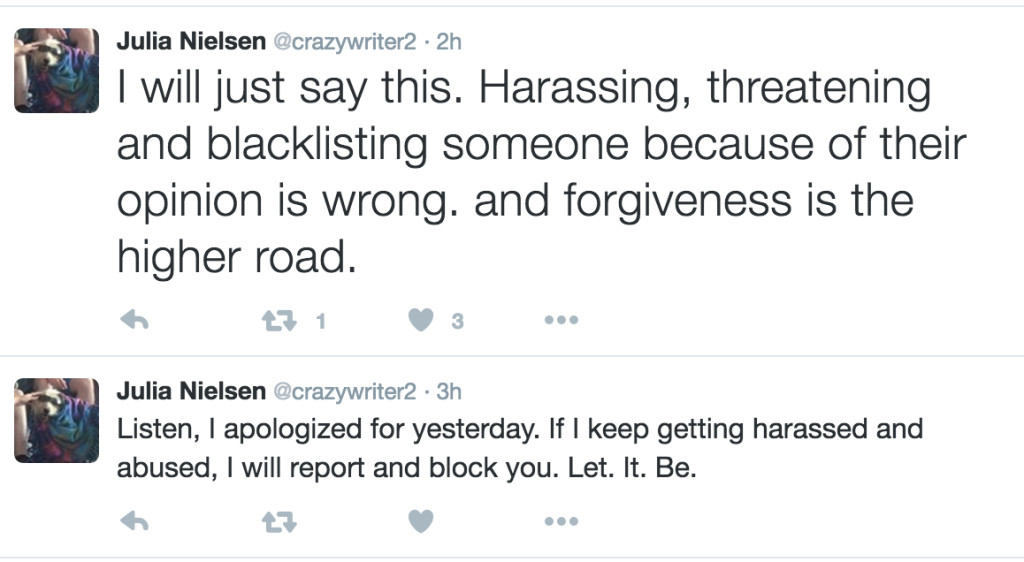 Now that she’s pseudo-apologized, Nielsen wants it all to go away. And of course, the best way to do that is to prove just how much you’ve learned:

Nielsen also reached out to Garrett directly, which Garrett confirmed to another Twitter user, describing the event as “creepy” and “uncomfortable.”