I’m not a big fan of “New Year, New You!” type posts. I feel like I’m already kind of locked into the groove of being my old me, so I might as well stick with it. But I do make resolutions. For example, these are my resolutions from last year, and how well I did keeping up on them:

1. Reading Challenge Last year was a bad year for me, reading wise. I was in a total funk, and not just one of those “I devoured this book, now nothing else compares” funks. I just had a hard time picking a book and sticking with it. This year, in an attempt to combat that, I’m doing this reading challenge.

I didn’t even come close to finishing the reading challenge. But I did read some great books, like Truthwitch by Susan Dennard, which I think might have been my favorite book all year. But the moment I made a goal to do more reading, I quickly abandoned it. This is going to be a theme in this post.

2. Take Weekends Off Toward the end of 2015, I got serious burnout. Burnout spirals me into depression. Depression makes me a person I don’t like. And when I don’t like myself, the burnout gets even worse. I made an effort to take the month of December off. I didn’t exactly stick to it. But this year, I’m making myself a strictly Monday through Friday gal. Weekends won’t be for work, but for just hanging out and Me Time. Hopefully this prevents further burnout.

I did start taking weekends off, and I pretty much stuck to it, with the exception of a couple of writing retreats. But this didn’t stop me from getting burned out, because my next resolution was:

3. Write 600,000 Words This might seem like it’s in direct contradiction to the whole “Take time off, don’t get burned out” thing, but I think that my new schedule will actually make me more productive, so this is probably totally do-able.

Oh, totally doable, huh? Your new schedule is going to make you “more productive,” you say? I wrote 435,319 words in 2016. That’s a lot. But it’s not 600,000. And I’m still burned out. When it became clear (around September) that I wouldn’t make my goal, everything in my head ground to a screeching halt. More on that later.

4. Tag Things On This Blog The lack of tags infuriates some of you. I understand. I’m just not good at tagging. I’m going to make an effort to tag stuff now. I probably will not go through and retag all my old entries, as this blog was started in 2008 or something and I don’t have that kind of time to devote to it. But I’ll at least try.

1. Stop tracking word counts. This may seem counterintuitive to avoiding burnout. After all, how will I have proof that I’m actually getting anything done. In the past, the thought of not entering my daily totals into a spreadsheet would made my skin crawl. But tracking isn’t helping anymore, as I find myself too focused on the numbers and not on the joy of creating. I came up with a new tracking system, instead. This is the tracking system I used in my bullet journal last year, in addition to the spreadsheet on my computer: 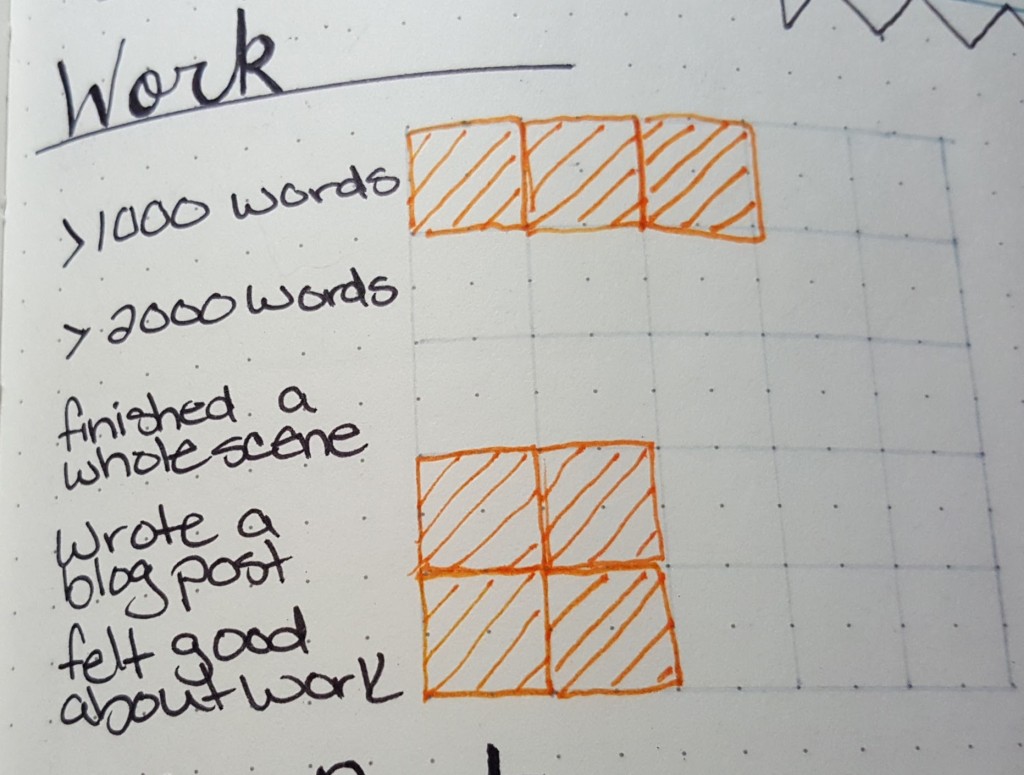 Those last two days weren’t forgotten. I didn’t make my word count or finish a scene or blog post on those days. So I didn’t feel good about my work, no matter what I did accomplish. Maybe one of those days I formatted a manuscript or filled out an interview. Maybe I did research. But none of it counted as work to me if I didn’t see numbers in the spreadsheet. Writing doesn’t always mean actually putting down those words, especially if you’re self-published. By discounting everything else I was doing, I was asking myself to work twice as hard. And if I didn’t hit that mark, I didn’t allow myself to feel good about anything I’d gotten done.

This is my new way of tracking my work: 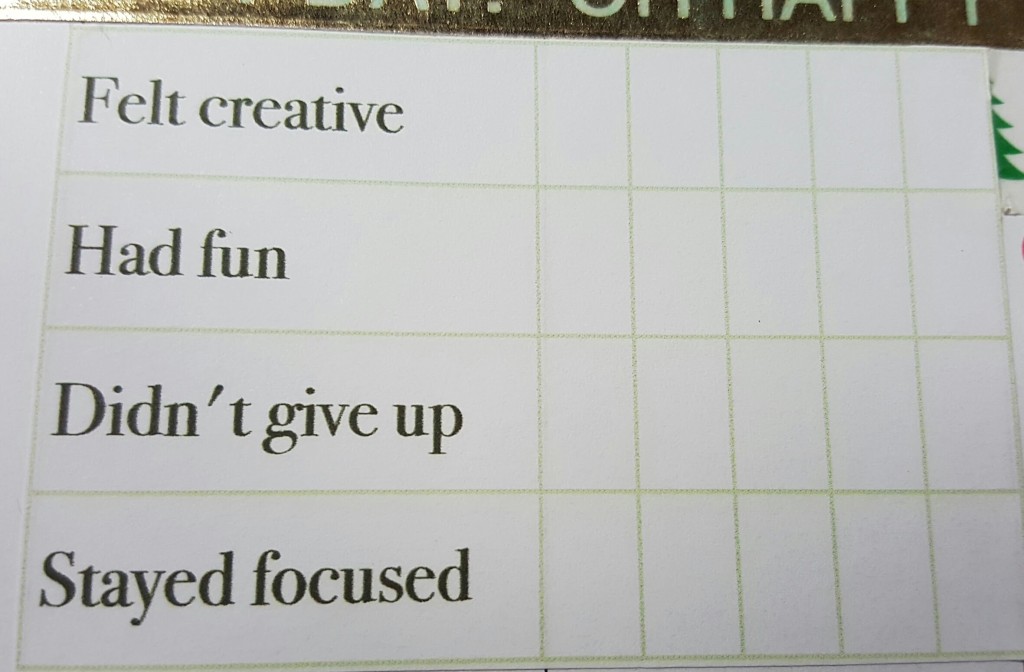 Instead of focusing on quantity, I’m going to worry about how I feel. Because entering numbers into a spreadsheet destroyed all the joy I used to feel about writing. Which leads me to my second resolution:

2. Be more forgiving of myself. I talk a good game about self-care and being kind to yourself. But wow, I don’t practice it. I over-extend myself, then get completely negative if I can’t fulfill my own expectations. Then I procrastinate. That just makes things worse. I spiral deeper and deeper into depression. Then nothing gets done, and I get even more depressed. Instead of focusing on times I mess up, I’m going to have to start remembering to look forward without constantly beating myself up or setting unrealistic goals.

For example, here’s a big one: I started homeschooling my teenage son. And yet, I expected myself to have the same output as I used to have. That’s not, you know. Totally absurd, or anything.

3. Spend more time on hobbies. I’ve been viewing hobbies as something I don’t have time for. Things like reading, gaming (which I finally can do again, after four years, now that my seizures are controlled), knitting and crocheting, coloring, needle felting, all those things I like to do? I stopped doing them if I didn’t have a way to make them “useful.” I love soap making, but I turned it into a side business instead of a hobby so that I could justify doing it. I turned my bullet journal and planners into my only non-writing related hobby I regularly made time for, but only because it was necessary to plan my week. Stickers, coloring, etc. were just a bonus. This year, I’m going to train myself to understand that I deserve to take breaks and do things that aren’t just “useful,” but pointless and fun.

4. Resist. In the only way I know how. By reminding people, via social media and the creative energy I put out into the world, that the United States isn’t operating “as usual.” The things we’re seeing here now aren’t normal. They aren’t what we stand for. And while I physically can’t go out and march in protests, I can continue to be a voice. I’ve wanted to give up so many times in 2016 and accept powerlessness. In 2017, I’m going to resist not only that instinct, but the facism my homeland is descending into.

5. Watch more Disney movies. A long time ago, Disney movies–problematic as they can be–gave me a regular escape from reality. Embracing my inner princess just might save my sanity this year, the way twelve rewatches of Galavant and Supernatural got me through 2016.

6. Promote my work, without feeling guilty. I’m one of those authors who goes, “I wrote a thing. Read it, maybe?” Ha ha ha, no. Not anymore. I’m not going to turn into an hourly scheduled tweet, buy my book, buy my book kind of person. But I’m not going to be ashamed of promoting myself anymore, or feel bad if I post here about books that are going onsale. When I sit back and think, “Damn, this author moves way more copies than I do,” it’s almost always because they’re unafraid to sell themselves. I’m not a natural salesperson at all, but there’s a difference between a hard sell and actually being timid and apologetic about self-promotion.

Those are my resolutions for 2017. Do you have any resolutions? Share them in the comments. Maybe other people will see one of yours and go, “Hey, maybe I’ll do that, too!”