STATE OF THE TROUT: Where I’ve been, you’re doing fine, and BABY MAKES THREE cover reveal!

That’s because I was dying.

Okay, not dying. I’m still alive (though I don’t believe anything so insignificant as death would ever stop me from blogging), but a really horrible plague hit our house. Fever, chills, cough, chest congestion, sore throat, earache and the drainage. My god, the drainage. All of this happened while I was trying desperately to finish the latest Ian and Penny books. Once I got those off to my editor, I allowed myself to take some much needed time off and just lay around eating popsicles and soup like a kid recovering from tonsilitis.

Anyway, I’m recovered and hopefully will remain so for a while. Fingers crossed. But while I was gripped by the miserableness, I had some thoughts about my fiction writing and how basically awful I’ve been to myself over it lately. I talked about this on Twitter but I think it’s important enough to share here, too.

My last release, The Sister, came out in August of 2017. I planned to release Baby Makes Three in February of 2018 at the very latest. But I only just now handed it off to my editor. Since January, I have been so brutal in my interior criticism of myself. I started writing Baby Makes Three in September, for god’s sake! Now, Baby Makes Three won’t come out until May? That’s eight months! Eight months between releases! How can I possibly sustain a living that way? We’re going to be poor again! We’re going to be on food stamps again! I should just stop writing and get a real job since I’m obviously no good at this one!

Obviously, this constant litany of self-hatred wasn’t conducive to my creativity. I would go days without writing. At one point, it took me a month to finish a chapter. After I got over the mid-book slump, though, things started to pick up. By the time I sent the book off to be edited, I realized I’d been way, way too hard on myself. During the writing of these books, the following things were going on:

Now, granted, I didn’t have to do the theater stuff I did, but we know what happens when writers are all work and no play. There’s a whole horror novel about that. On top of all of those things, I neglected to remember that:

So, while I was freaking out about not working enough, not getting anything done, I was really writing about 15,000 words per week here and doing things for my mental health so that I could continue to function. On top of that, I was writing basically 160,000 words of fiction in eight months. That’s four months per book. I was doing just fine.

If you’re writing and you’re frustrated by how little you feel you’re getting done or how long it’s taking you to finish, I want you to drop what you’re doing and take stock of your life and what’s going on. Are things at work stressful? Are you putting in a lot of extra hours or coming home mentally sapped? Are you reeling from the loss of a loved one or a major upheaval in your home? Did a pet die? Did you or someone else lose a job? Maybe you’ve taken up a new hobby and it’s taking up time you would have spent on writing (which is not necessarily a bad thing, if it’s keeping you on an even keel)?

No matter what it is, stop being hateful to yourself. I love these books, but it’s always going to be tempered with a little bit of sadness that the writing of it was so brutally un-fun. I shouldn’t have done that to myself, and I’m going to try not to do that in the future. I hope you can join me in that. Let’s make a pact right now: we’re not going to be awful to ourselves for not being mindless writing machines with no other needs or desires in life.

So, after all of that, do you want to see the cover of Baby Makes Three? Of course, you do! 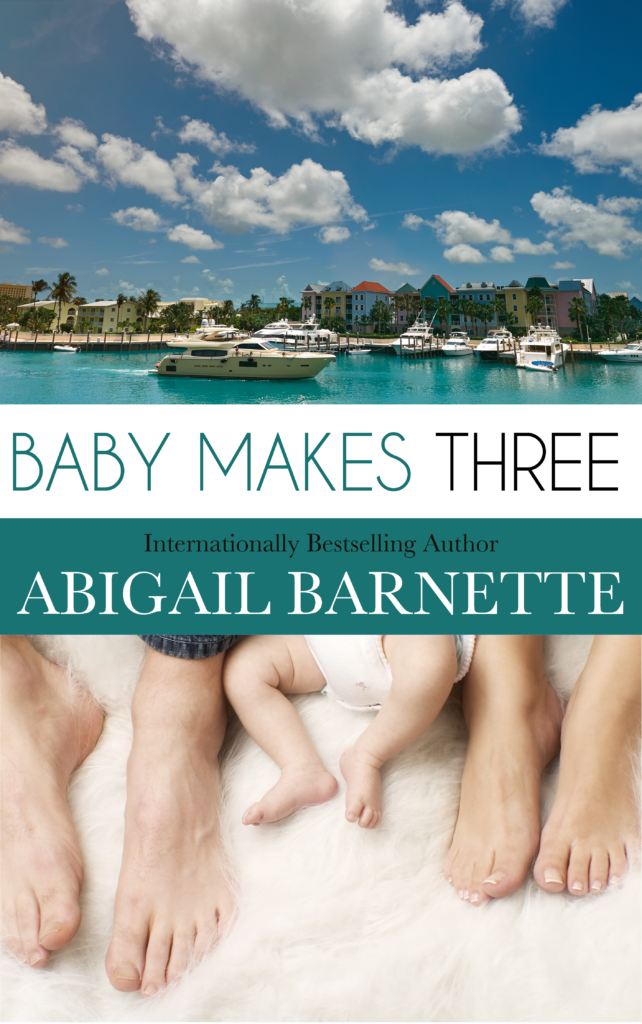 Baby Makes Three will be out in May. I’m not sure about a date yet but I’ll have more information as we get closer to the release. Thanks, everybody who continues to go on a journey with these characters!