In a story that’s getting weirder and weirder by the minute, it appears that someone has filed for a trademark for the word “forever” as it relates to all titles across all genres in print, e-book, and publishing houses.

The author? Heidi McLaughlin, New York Times and USA Today bestselling author of Forever My Girl, recently a major motion picture and one of the specimens entered on the application.

And yup. This case is just as big a banana split as Faleena Hopkins’s trademark of “cocky”. But in a whole different way. See, McLaughlin claims that the trademark has been filed by…an impersonator?

The “Marisa” referenced in the post is McLaughlin’s agent, Marisa Corvisiero, of Corvisiero Literary Agency, who McLaughlin states did not file the trademark on her behalf:

But while McLaughlin insists that the filer does not represent her, Corvisiero Literary Agency’s website still shows McLaughlin as a client and the application has Marisa Corvisiero’s law firm listed multiple times as the person seeking the Trademark.

Though McLaughlin claims that Corvisiero did not file the application, Corvisiero stated on Twitter:

The confusing wording of “wasn’t not” aside, Corvisiero claims her “client” authorized her to file the trademark. The client being the entity listed on the application, Wicked Literary LLC.

So, who owns Wicked Literary LLC? McLaughlin hasn’t answered when asked if she’s the owner, and the LLC is registered by American Incorporators LTD, a service specializing in establishing LLCs. Does McLaughlin own Wicked Literary? That’s kind of a dead end. It could be a shell corporation set up by McLaughlin or Corvisiero. Or could it be, as McLaughlin claims, an impersonator?

For the moment, Corvisiero isn’t answering any more questions on Twitter. In comments on her Facebook status, McLaughlin has dodged straightforward questions from confused readers, insisting that she has been impersonated and the trademark was filed without her permission. Both have said that they’re looking into the situation.

At the time of writing this, neither have said that the trademark application will be challenged or withdrawn.

Now we come to the part of the blog post where I ask some questions and say some shit.

I believe that people impersonate authors. It happened to me when my second book came out. A woman in South Carolina was pretending to be me, going into bookstores and signing stock, and even wrote a fanfic that she passed around on MySpace as the first draft of the third book in the series. She was only caught when a man she’d begun dating sent an email intended for her to the email address on my website. My publisher and agency had to send C&Ds. It was a mess.

In my case, the woman was doing it for self-aggrandizement and attention. She had something to gain, no matter how weird. I want to know what someone has to gain by setting up an anonymous corporation and filing a Trademark application, both of which come with fees in the hundreds of dollars, then either fraudulently representing themselves as an agent or as an agent’s client. Trademarking a word that applies to an intellectual property that one doesn’t own in the first place won’t actually result in a monetary profit. Nor could you brag about owning the trademark if you committed fraud to get it.

McLaughlin’s readers are already formulating theories that range from Marisa Corvisiero being a stalker to the mysterious impersonator being another author who is jealous of McLaughlin’s success and seeking to use the momentum of Faleena Hopkins’s fall from grace to destroy McLaughlin’s reputation. But all of this seems very far-fetched if the following questions remain unaddressed:

Though McLaughlin’s fans are already blaming bullies and haters (who are in fact simply people asking questions that have arisen through McLaughlin and Corvisiero’s conflicting statements) there are red flags all over. It doesn’t look good that McLaughlin came out of the gate claiming that her children were being attacked (these attacks do occur frequently in online disputes, but usually when a situation has escalated and not at the beginning of the social media response), nor do her repeated Facebook responses referencing pitchforks (alluding to persecution by an angry mob), especially considering that these were similar actions taken by Faleena Hopkins in her defense. Yes, it would be very upsetting to find that someone had taken those actions on one’s behalf without one’s consent, but directing anger at the people bringing the issue to one’s attention and asking for straight answers, instead of at the person who took those actions, makes a person look like they have something to hide.

At the time of this post, McLaughlin also hasn’t answered simple yes-or-no questions regarding whether she plans to challenge the trademark or whether or not she owns Wicked Literary. These are much easier questions to answer than inquiries people have made regarding the involvement of law enforcement over the impersonator or whether she intends to sue Corvisiero, fire her, or contact the New York State Bar Association (all questions no one should be expecting answers to at this time). Simply saying, “No, I don’t own Wicked Literary LLC,” or “Yes, I plan to challenge this fraudulent application,” would make McLaughlin appear a lot more credible. Withdrawal and refusal again make it seem as though she has something to hide.

As it stands, based on the actions of McLaughlin and Corvisiero, it looks very much as though McLaughlin did seek the trademark and simply tried to hide her involvement through the use of a shell corporation. Then, when she threw her agent and attorney under the bus, her plan backfired. But McLaughlin needn’t worry; she has a legion of fans already demanding silence over the issue and insisting everyone believe she’s innocent despite her odd response and unwillingness to answer questions that have easy, cut-and-dried answers. Niceness, as we all know, will induce people to cover a multitude of sins on your behalf.

McLaughlin has stated that she’s trying to fix the situation. To drama-weary eyes, it looks as though she’s more interested in fixing the fallout from being caught.

UPDATE: McLaughlin made the following statement on her Facebook page: 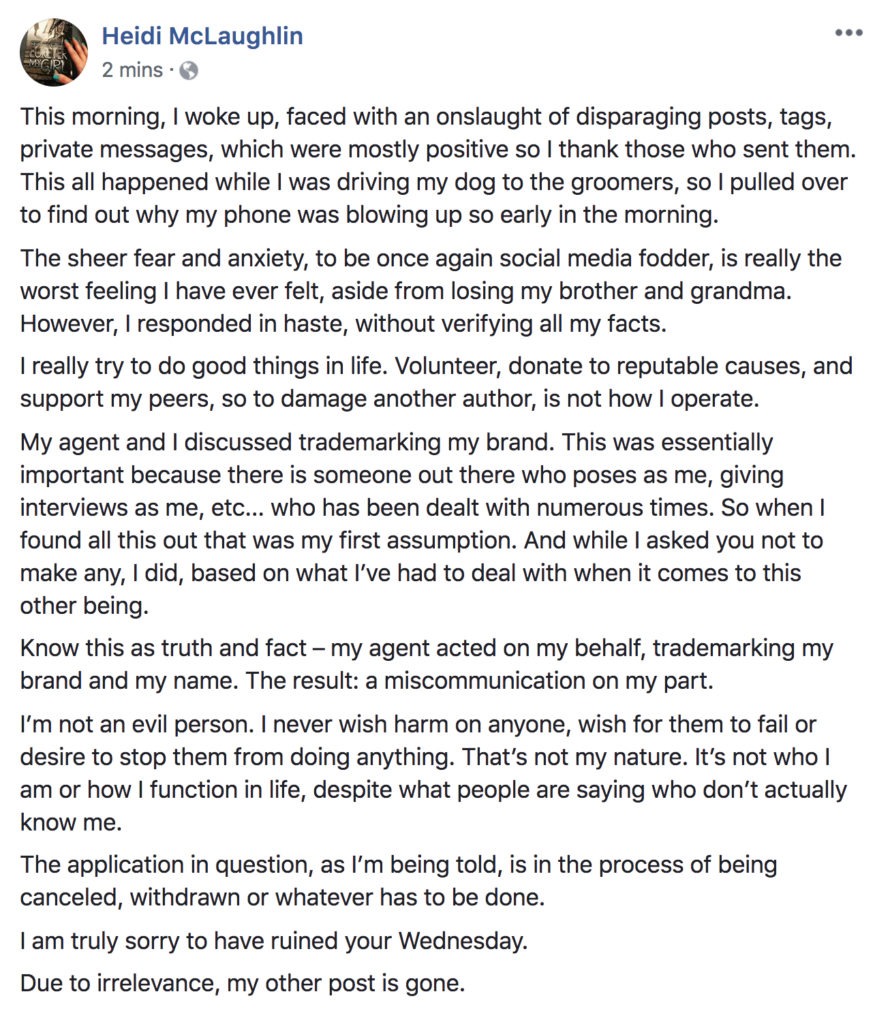 Due to the high level of “poor me, I volunteer, I donate to charity, people in my life have died and it made me very sad,” in her post, I’m officially not buying that it was a mistake. Maybe that’s unfair of me. Or maybe it’s because we see this canned victim reaction whenever someone’s scheme falls through.

UPDATE THE SECOND: An anonymous source sent me the following screenshots, wherein McLaughlin asks Alessandra Torre’s “Inkers” group where they chose to set up their LLCs: 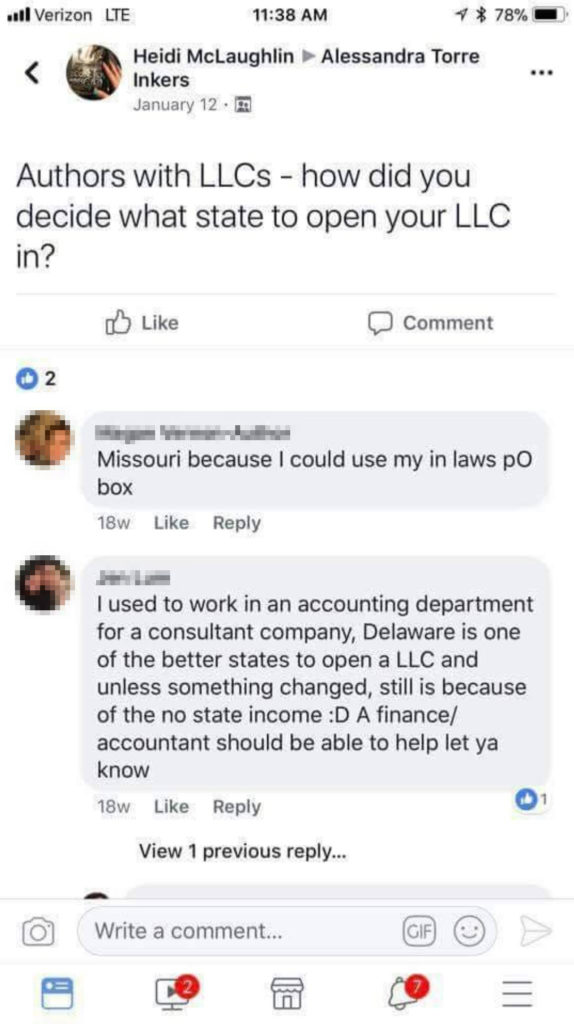 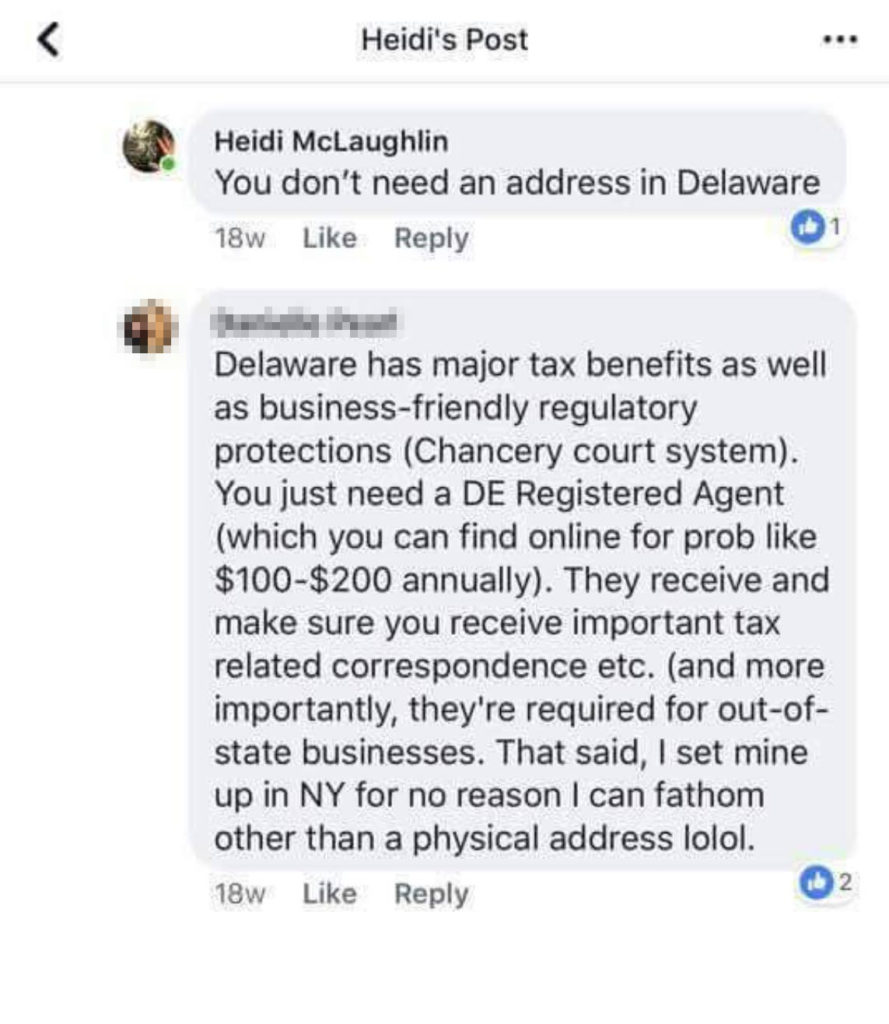 UPDATE 4: A different anonymous source sent me the following screenshot: 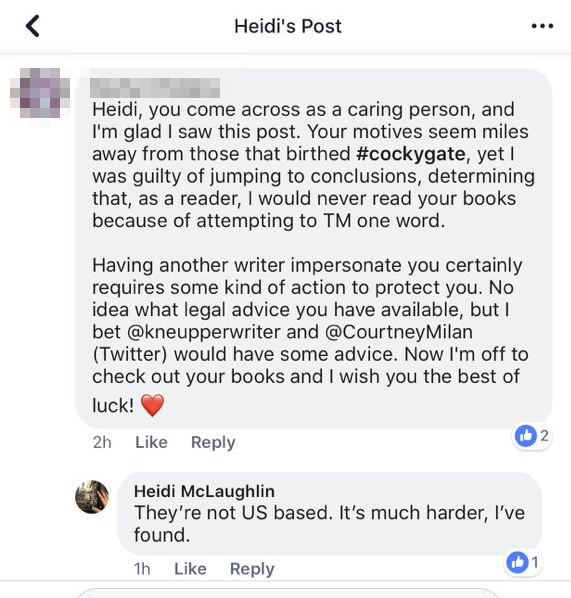 First of all, nice job offering the services of those attorneys? Don’t do that.

Second, McLaughlin needed to get the U.S. trademark to protect against an impersonator…who isn’t in the United States and isn’t subject to U.S. law.

Still not adding up.