When Your Writing Retreat Turns Out To Be Natural Disaster Adjacent

Every year since 2012, an intrepid band of international adventurers convenes in Michigan’s beautiful Upper Peninsula to write and relax in a secluded cabin far from the cares of a world with reliable cell coverage and wireless internet. On the shores of the beautiful and terrible inland sea of Lake Superior, spirits both metaphysical and alcoholic flow as freely as the creativity and camaraderie.

Okay, what I mean is that for a week every June a bunch of authors (This year it was me and Bronwyn Green and Jessica Jarman and Kris Norris) go “up nort” to get drunk and complain about how hard it is to be a writer and how nobody understands us. It’s a great time, so I was quite surprised to pull my daily tarot card on the morning our grand adventure began only to get the Wheel Of Fortune reversed.

From BiddyTarot.com (which is an amazing site, by the way, and you should totally check it out if tarot interests you):

Oftentimes, the reversed Wheel of Fortune indicates that there are negative forces at play that are outside of your control, leaving you feeling helpless and powerless.

Obviously, my first thought was that this referred to us being swept off the Mackinac Bridge by a rogue wave or gust of wind. Because that’s the thing that I’m most frightened of on a trip to U.P. despite it only ever happening one other time. Somehow, we made it across the Mighty Mac unscathed, as you can see in the video below.

We even survived a weird and frustrating encounter with two separate strangers.

But overall, things were going pretty okay. What did that tarot card know?

Well, that tarot card apparently knew that poor Kris Norris, who bravely ventures into the United States from Canada to see us even though it has to be like passing into some kind of anarchic hell world, was making an unnecessarily lengthy trip from Vancouver, B.C., to Minneapolis, MN. It took her thirty-six hours to fly between the cities. When Jessica Jarman arrived at the airport to pick her up, Norris’s luggage had taken a side trip. To Chicago. Where it would stay until one in the morning. Since the flight delay had already massively set back their departure from Minnesota, Norris arranged for her bag to find its way to the Houghton County Airport and they struck out on their drive to Michigan.

Despite a few detours, Bronwyn and I arrived at the cabin ahead of Norris and Jarman. About an hour later, we heard thunder. “Watch, they’ll get here and the second they get out of the car it will be like, whoosh!” I joked. Sure enough, Norris and Jarman and the rain all arrived at about the same time. We chatted for a while, then went to bed, but I woke often through the night from the thunder and noise. Generally, storms don’t bother me, so long as my devices are fully charged, but even the rain was super loud and it just went on and on and on.

I woke to frantic, ALLCAPS texts from some friends who live in Hancock, warning me of flash flooding and checking to make sure we were okay and had arrived safely. Bleary-eyed, I checked the news on my phone––usually, we don’t get any cell or data at the cabin, but this year the signal was strong enough most days to at least get information via Facebook––and stared in shock. This is what happened:

Those are all sources from different days and have a lot more information than was available to us at the time, but you get the picture. I crept upstairs to Bronwyn Green’s room and gently nudged her awake, which resulted in me almost getting karate chopped in fucking half because Bronwyn is apparently ex-KGB or something and jerked violently awake and ready to fight. I told her what was going on. Well, I summed it up: “I guess Houghton and Hancock are like…fucking gone?” One of us said, “Wouldn’t it be funny if we couldn’t get Norris’s bag because the airport washed away?”

We all got up and got on our phones (except for Norris, whose data connection relies on Maple syrup and fresh Canadian air to function). The stuff we found was mostly first-hand accounts of the damage via videos and photos circulating in the immediate aftermath, including this one from TV 6 (or, as people seem to refer to it regionally, “da channel six noose”):

The newscaster’s focus on the Taco Bell sign sent us into fits of laughter. If you’re not from Michigan or you’ve never lived in Michigan, you probably can’t appreciate the way Michiganders tend to fixate on incredibly small, mundane things in the middle of huge events, issues, and occurrences. But we were still kind of nervous. Houghton and Hancock are two separate towns on opposite sides of a river with a bridge between them. That bridge is the only way to access the tip of the Keweenaw Peninsula, where we were, and the roads to the bridge were washed out, underwater, decimated by sinkholes, or all of the above. Which left us trapped. Shit felt…kind of serious, but we can never be truly serious about anything. When Jessica Jarman broke the news that the airport was indeed inaccessible and therefore all of Norris’s clothes, toiletries, and medications were now in the heart of a natural disaster, we accused her of angering God and causing her to smite the entire county in the process. I suggested it was part of an elaborate Canadian conspiracy to battle the United States via the forces of nature, which Norris confirmed to be true. Then, we headed out for groceries and I updated readers about the situation via Facebook Live:

We were able to joke about the weird predicament we were in because we had no clear picture of the extent of the damage apart from some shaky videos of streets turned into waterfalls and the news anchor lamenting the loss of the Taco Bell sign. While Jarman’s sister fed us information from her home near the flood zone, we wouldn’t learn about the heartbreaking death of Thatcher Markham until much later. All we knew at that point was “thank god it’s just property damage and nobody has died.”

Once the National Guard arrived, the damage started getting repaired quickly. By Tuesday, some businesses had reopened and we were able to get to the airport, where Norris was reunited with her stuff. By Thursday, Jarman’s sister informed us that the way through Houghton/Hancock was clear and that the highways to the south were once again open.

But Monday, however, some furry friends who love pic-i-nic baskets arrived: 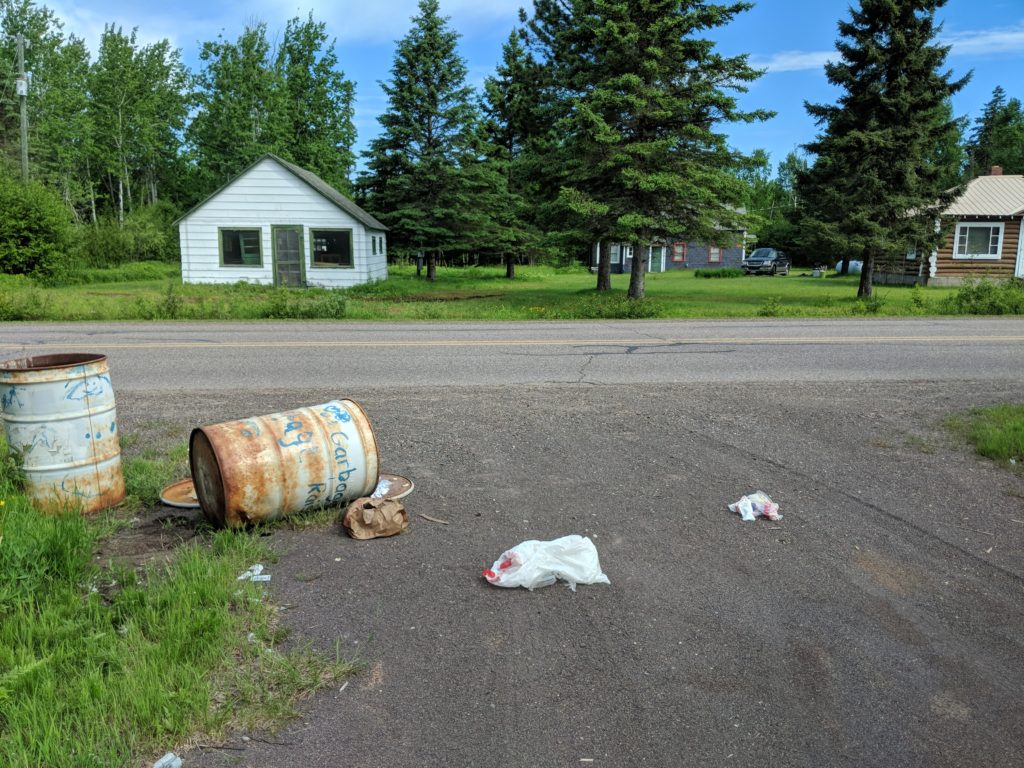 The flooding meant trash collection was postponed for the week. Which meant that when the people who’d rented the cabin the week before and had considerately moved their refuse to the garbage cans had inadvertently laid out a buffet for bears who’d headed to higher ground. We decided to keep our refuse in the cabin with us, instead of in the garage where our bear friends––who’d set up camp in the thin strip of woods between the driveway and the neighbor’s house––might be tempted to claw or push through the door to get at more trashy treats.

When the time came to go home, we got to view some of the remaining devastation. Whole streets churned to chunks of rock. Roadside parks filled with standing water. Businesses damaged and houses marked with waterlines on their siding. And good lord, the mud. Everywhere, mud.

The damage to Houghton and Menominee Counties happened in a matter of hours but will take much, much longer to repair. Early estimates put the cost of the damage at 50 million dollars. Low-income areas that were hit will take longer to recover; some residents may find themselves permanently displaced. Wells have been contaminated, trails and parks and other tourist attractions that boost the local economy will need maintenance.

Now, you may be thinking, “Wow, that’s awful. I wish I could do something to help.” Well, I’ve got a few suggestions! First of all, there are several fundraisers going on right now. If you can’t donate, share the links on social media; maybe someone you know has a couple dollars they’re looking to do a good deed with.

All dark humor aside, my heart is broken for the Markham family and for the home and business owners whose lives have been upheaved by this disaster. Over the past six years, this part of Michigan has come to feel like a second home, as one of the most important weeks of my year occurs there. It’s a place unlike any other in the world and I wish all the residents the very best possible outcomes in the wake of this tragedy.