The mystery and enchantment of the title sequence from Perfect Strangers

“I watched the intro without sound and from it guessed that the show is about a time traveler from the 1800s who is befriended by a guy who left home for college at age forty seven.” –Charlotte Stein

Thirty-three years (and two days) ago, Perfect Strangers premiered on ABC. The long-running sitcom was instrumental in the development of the channel’s iconic “TGIF” (“Thank Goodness It’s Funny”) juggernaut that dominated television comedy in the late ’80s through the 1990s. The description Stein gave me via Twitter is about as accurate as one can get based on the information presented by the opening title sequence, with or without sound.

But if you dig deeper, there’s even more to discuss:

The season one intro begins with stars Bronson Pinchot and Mark Linn-Baker standing in front of the least popular background choice at the Sears Portrait Studio:

The theme music doesn’t waste any time letting you know that you’re about to have a good time. No, a great time. No, a life-changing experience that can only be expressed through the driving beat of a Casio keyboard and a good old fashioned harmonica solo. Our leads get a Brady Bunch introduction, complete with the same shade of blue! 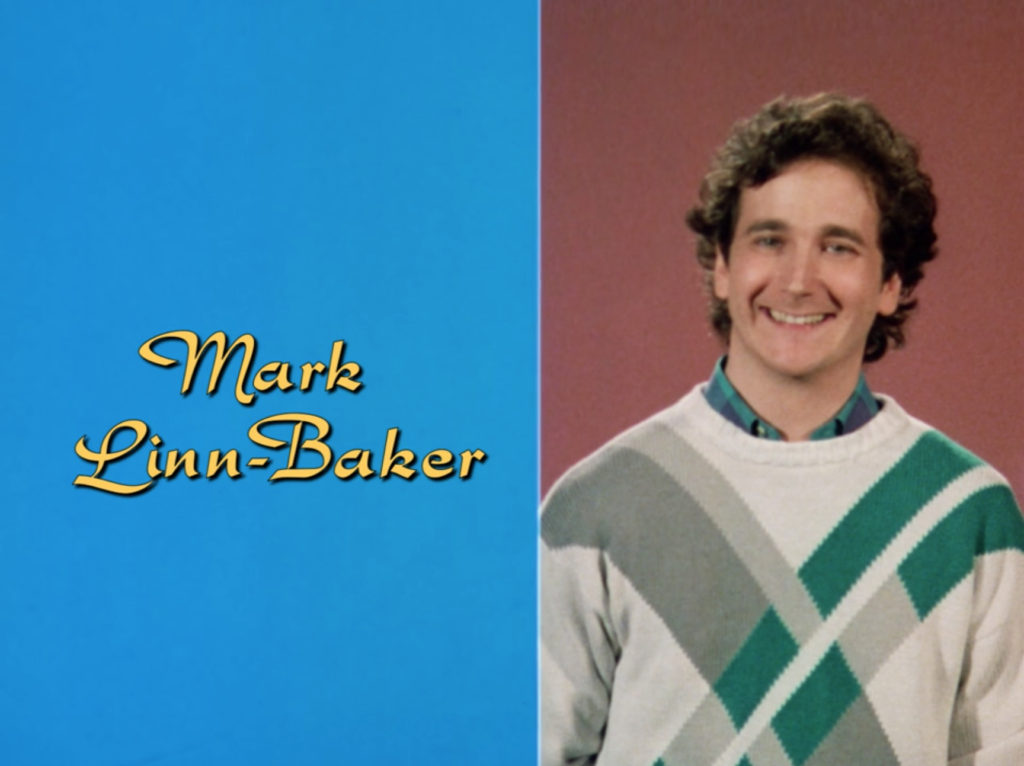 Note Linn-Baker’s costume change here. In the opening shot, his outfit is something you could put on today and wear around town and nobody would bat an eye. Within seconds, that all changes. “Maybe the things I remember about fashion in the 1980s are too broad and extreme,” one thinks when gazing upon Linn-Baker’s solid teal sweater. “Maybe the proliferation of pop culture images featuring dated trends has altered my perception and memory of what people actually wore during that decade.”

And then you see the second sweater and you’re like, “Did someone knit the logo from a medical billing company’s corporate letterhead? You really can get inspiration from anywhere!”

Next, we swoop in on a default Midwestern neighborhood. “Sometimes the world looks perfect,” the theme song’s lyrics explain. “Nothing to rearrange.” And indeed, the scene set before us does appear to be idyllic: 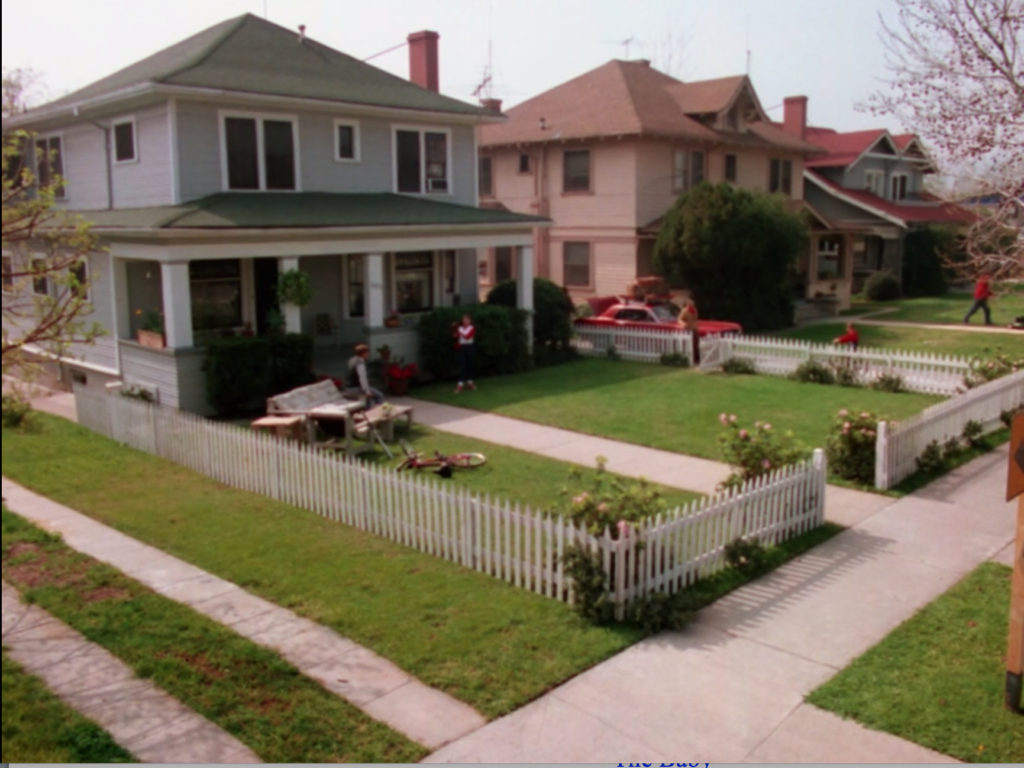 But right away, I’ve got a few concerns. First, why are two neighbors both dressed in long-sleeved red shirts? What’s going on with that family next door? Do they wear a uniform? Also, is that a full living room set complete with coffee and end tables just sitting on the front lawn?

Though the lyrics tell us that sometimes, the world looks perfect and no change is needed, they tack on a pretty big “however”. “Sometimes you just get a feeling like you need some kind of change.” What’s this change? Well, it looks as though this family’s adult son is finally moving out. 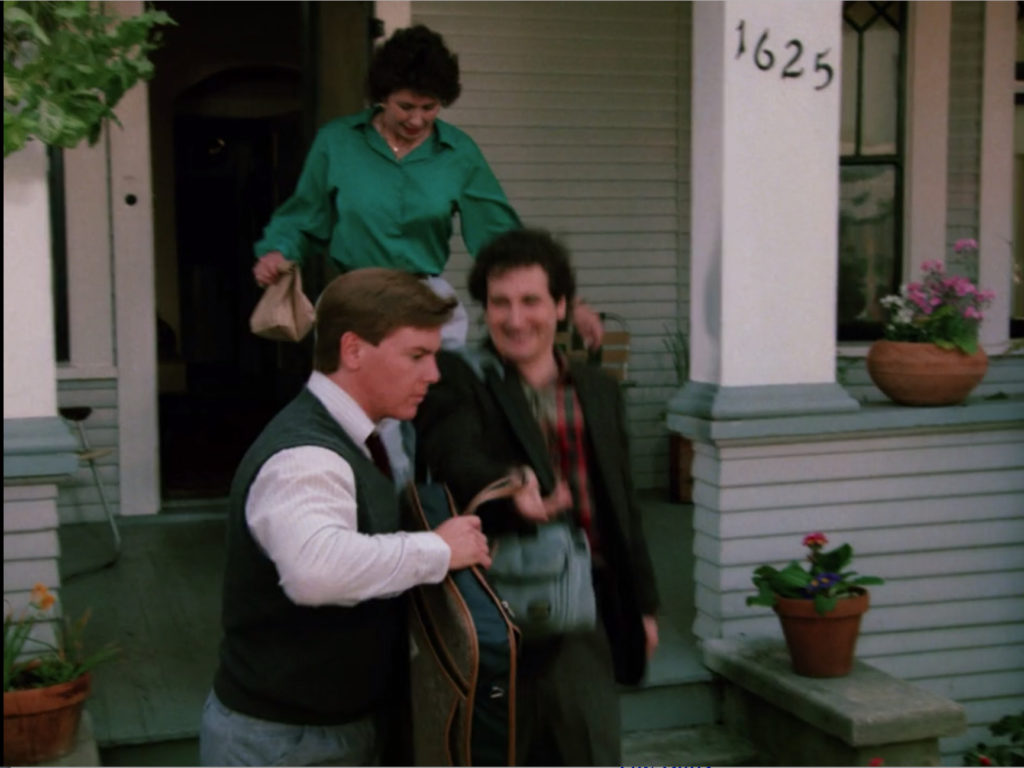 Well, at least one of them. Eagle-eyed viewers will note that the other guy is first seen in the aerial shot of the house, sitting on the arm of the law couch in his junior associate sweater vest and tie. Exactly how you dress to just chill on your front-yard sofa.

On the short walk to his car, Linn-Baker (heretofore referred to as “Larry,” his role on the show) collects a cast of interesting characters. For example: 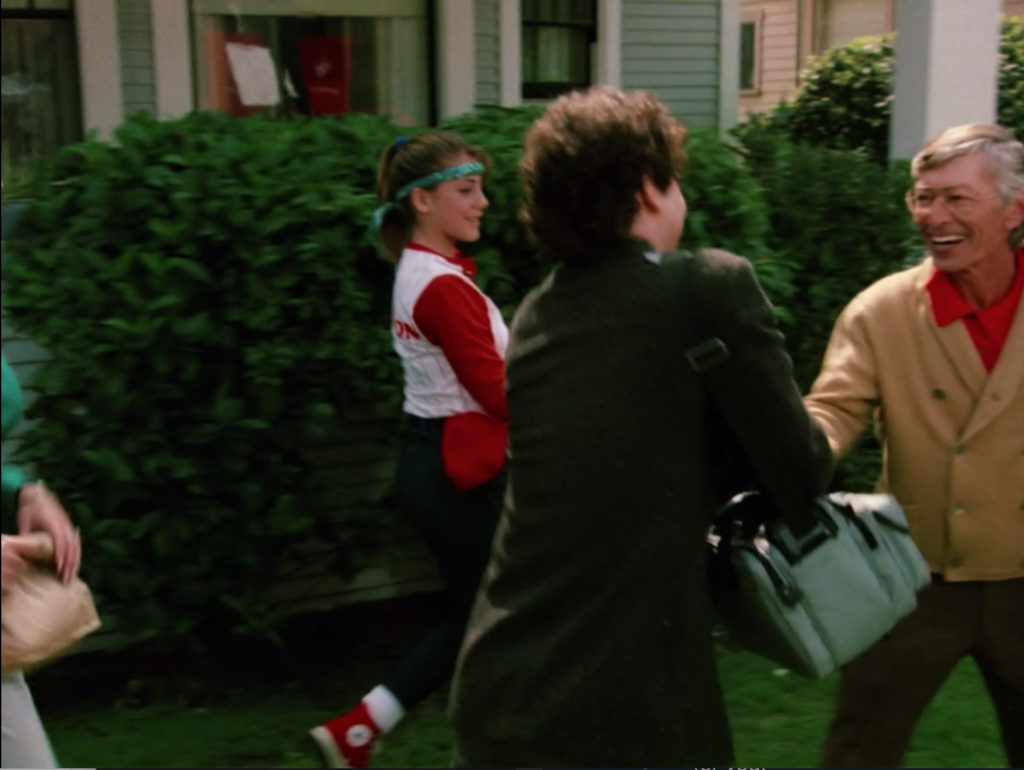 Baseball Girl and Extremely Russian Mr. Rogers, that latter of which could easily blend into my family photos. They’re both contributing to the creepy proliferation of the color red. Check out Mr. Rogers’s shirt and Baseball Girl’s uniform, right down to the shoes. What is going on in this neighborhood? Does Baseball Girl’s team have a game today? And everyone in the neighborhood is wearing red to show their support?

But let’s not overlook how prepared Baseball Girl is for any situation. Sweatband, ponytail, and easily accessible cap? There will be no sun in her eyes today. 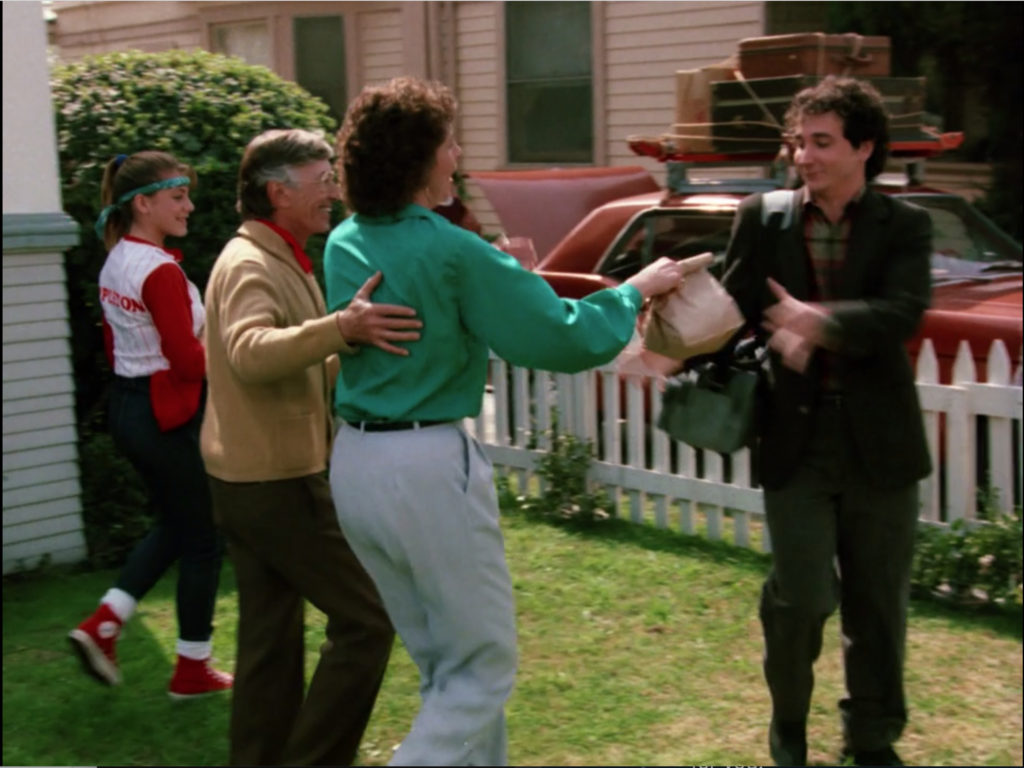 Please note the (red) car behind him. There are honest-to-god steamer trunks lashed to the luggage rack. I’m going to do the legwork right now and connect these to later events in the title sequence.

Who is that guy? He stands out from the crowd. He’s not behind the fence. He can’t be caged. Look at that near-mullet thing happening because he can’t figure out what to do with his hair so the cut is kind of growing out. The casual posture. The steely dominance he exerts over his emotions. Those shades.

Is Larry fleeing from a different sitcom that none of us know about?

On the other hand, the lyrics are a little sinister. “No matter what the odds are this time/nothing’s gonna stand in my way/This flame in my heart like a long lost friend/gives every dark street a light at the end.” It sounds like Larry has attempted to escape before. Escape in his red car. From the red neighborhood. 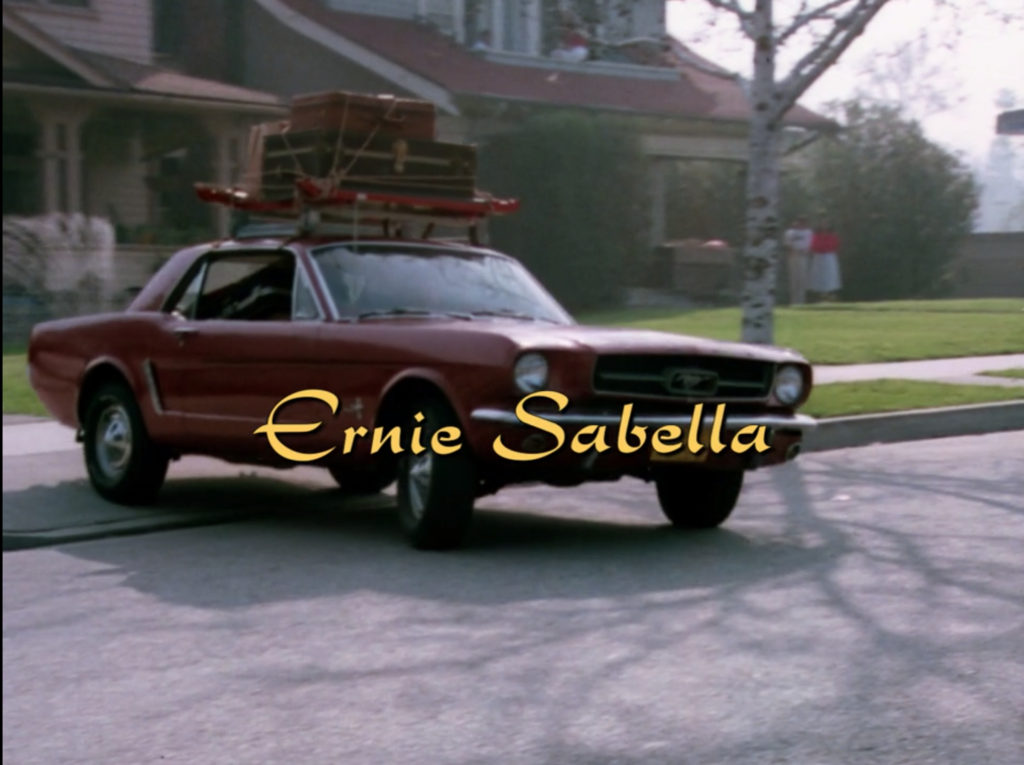 Somewhere else in the time vortex, we find Balki, a simple shepherd. His family is also seeing him off on a grand adventure: 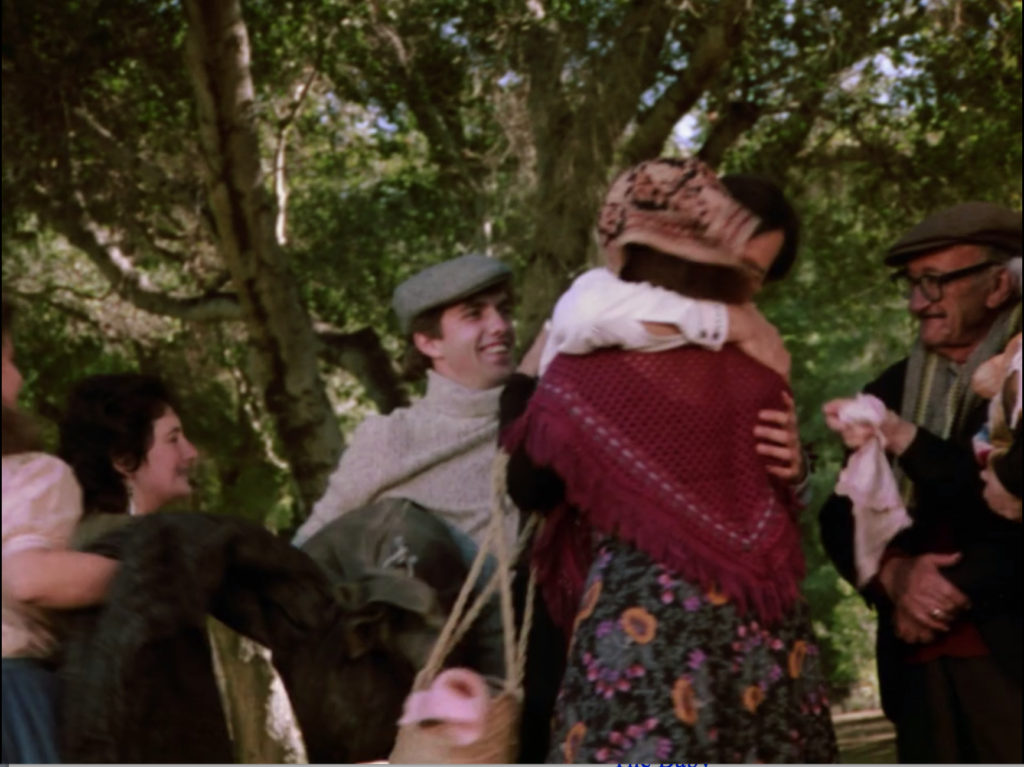 This is what I find fascinating. Compare the zany cast of characters Larry is leaving behind in his desperate flight from The Red Land. Now, check out these people. It’s all extras from a community theater production of Fiddler On The Roof. Sure, the dude in the back with the sweater on got here direct from an Irish Spring commercial they were filming on the other side of the same park, but all these other people are vaguely Old World peasants. I honestly expected Extremely Russian Mr. Rogers to pop up again in this scene. I mean, not to give away any spoilers, but it’s possible; Balki and Larry are cousins. At least one of Larry’s parents have to be from Balki’s home country of Mypos. And that is where they got those steamer trunks! I told you I’d connect it!

On the other hand, maybe I’m showing my ignorance of Eastern European sitcoms. Maybe someone in Belarus would look at this and go, “Whoa, they could be extras on Vladislav! or something!”

I imagine that Vladislav! is the Russian-language equivalent of John Mulaney’s short-lived Mulaney, but like, way more popular and successful. It would be on its eighth season if it existed.

My rampant xenophobia aside, I can see why my friend Charlotte Stein described this sequence the way she did. The only indication that Balki is departing for America in the 20th century is the sign on his horse-drawn taxi: 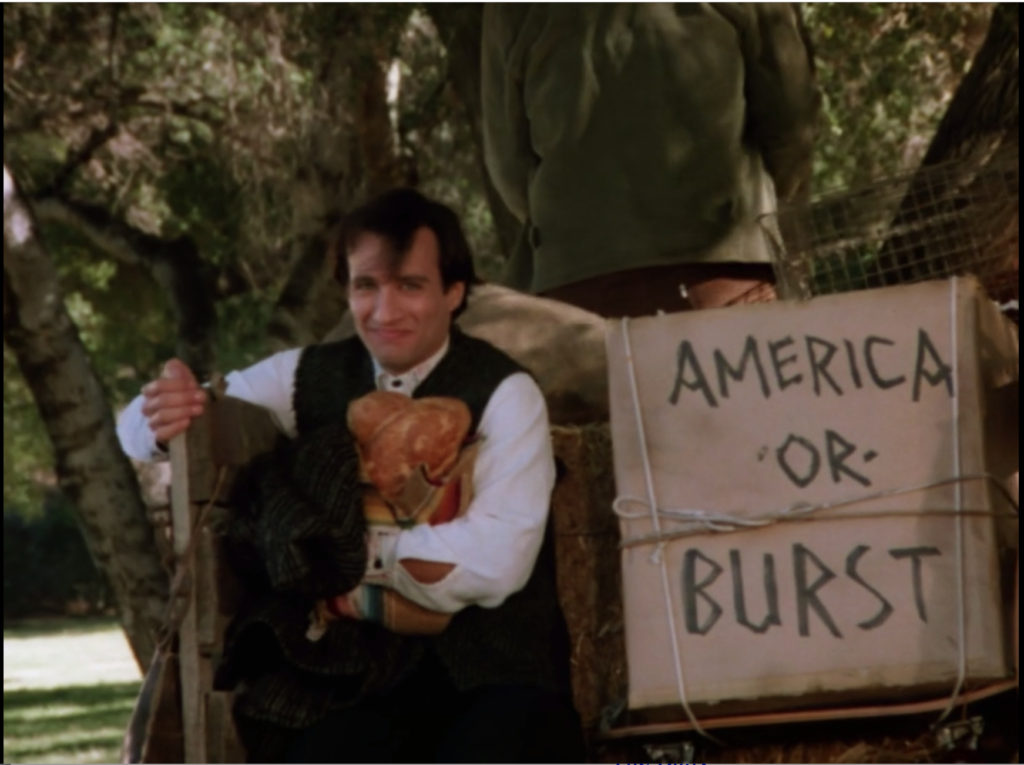 And it weirdly doesn’t get clearer from the b-roll shot of the…gas carrier that Balki rides to America? 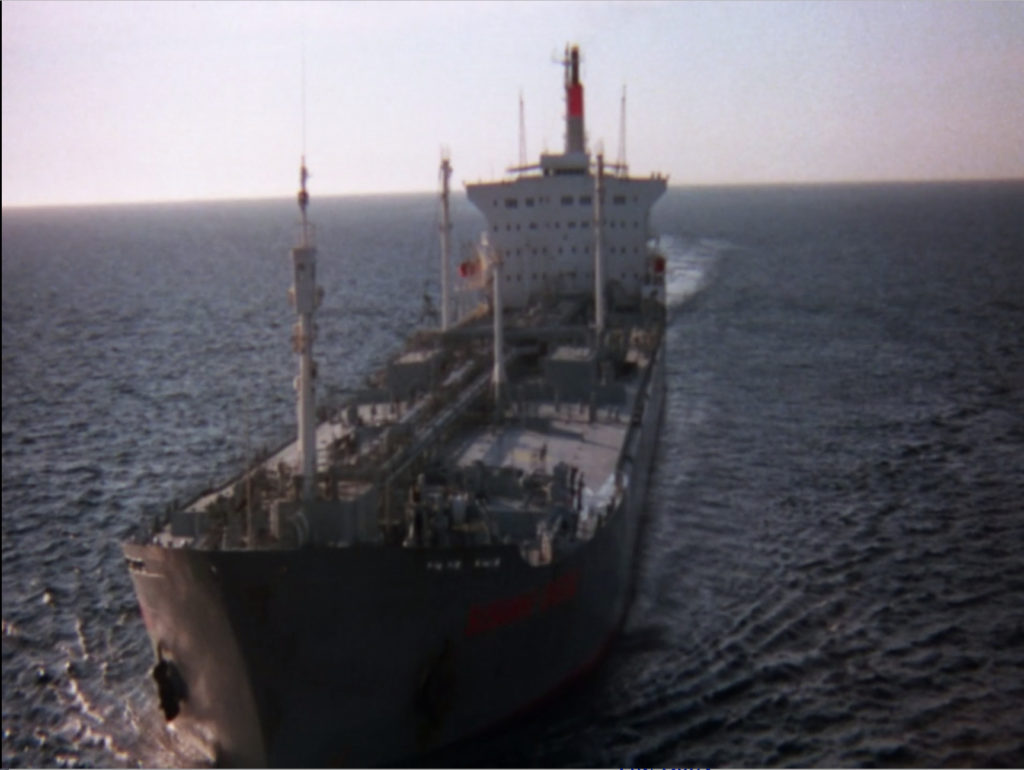 Imagine you’re working for PG&E, just cruising along on the open sea, and this Fivel Goes West motherfucker is just blundering around the decks, getting the full tramp-steamer experience: 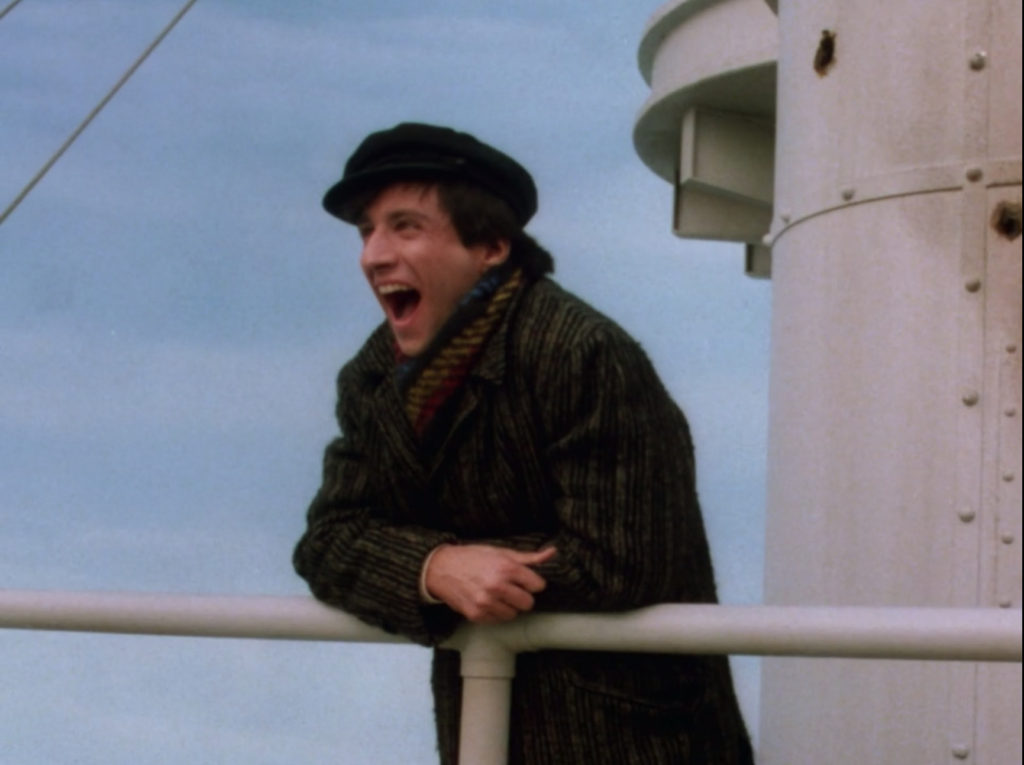 We are one helpful pigeon away from a Linda Ronstadt/Peabo Bryson duet.

Another stock shot of the Statue of Liberty lets us know that Balki’s long journey has come to an end. 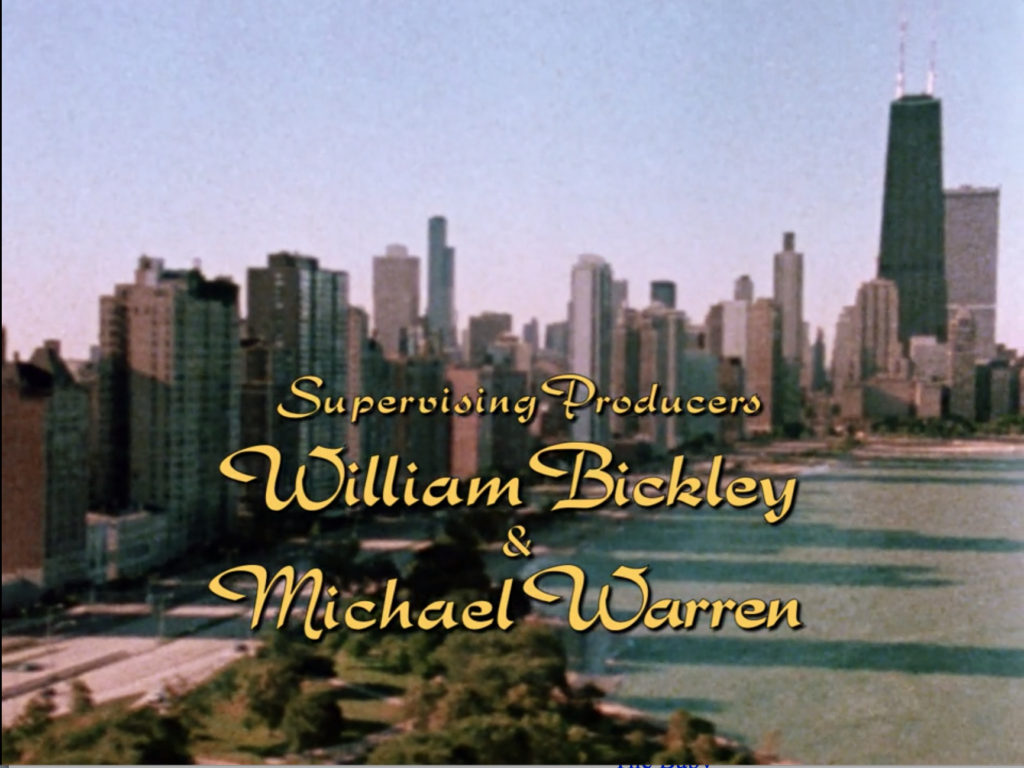 “Aha!” you’re thinking. “Not only are the credits over, as indicated by the fading theme song, but the show takes place in Chicago.”

You’re half-right. Because even though the music seems to be ending with a wistful harmonica solo, we’re following a Greyhound bus down a three-lane highway. It’s kind of like that episode of Rick and Morty where they see the commercial that follows the spokesperson back to his house and films him making a sandwich. It feels like they forgot to end title sequence where it was meant to end. We’re just voyeurs now.

Who’s on the bus? 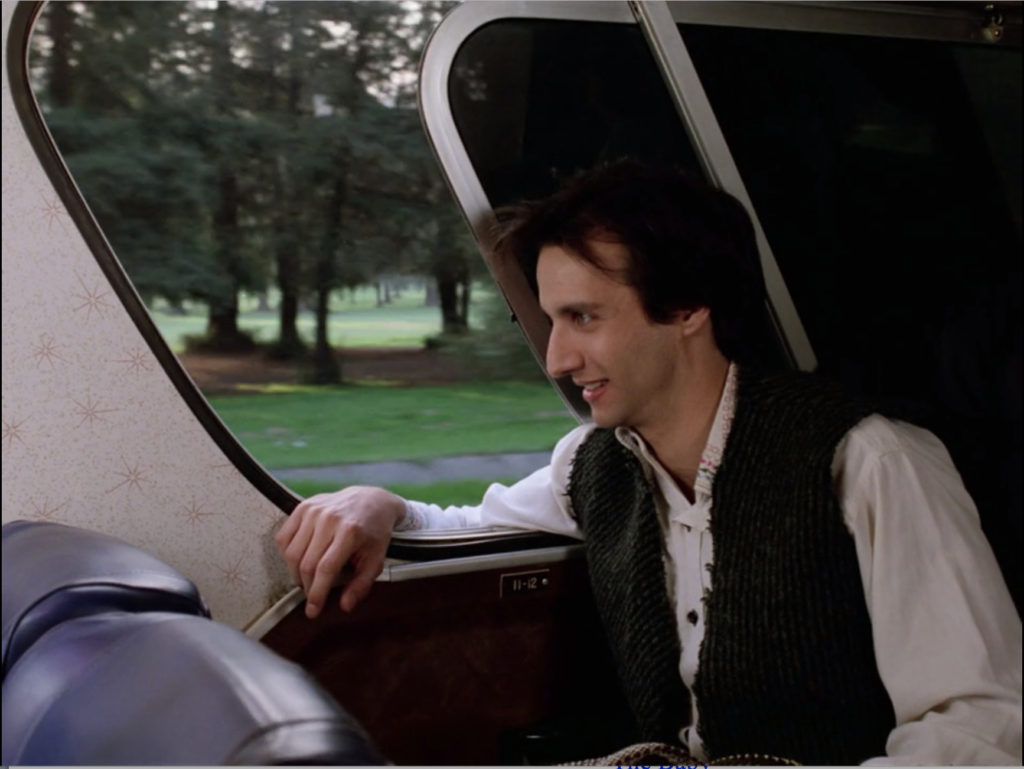 Of course, it’s Balki! Don’t be ridiculous. We already know that Larry has a sweet-ass Mustang. So, where’s he at in his journey? 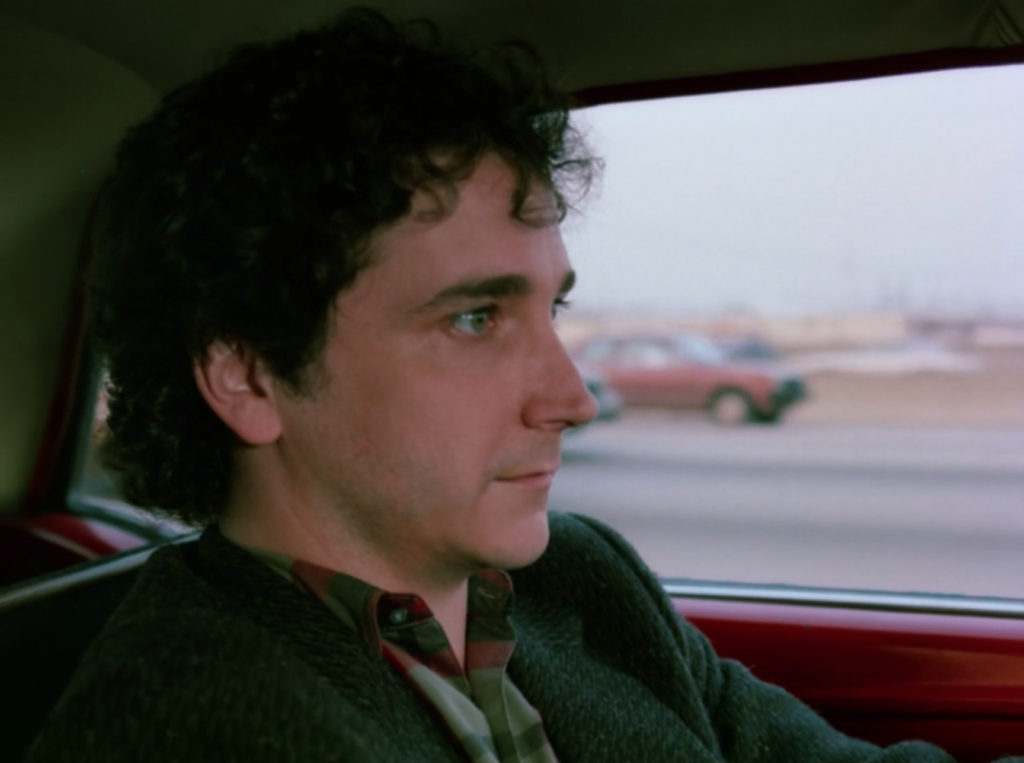 Look at the terror on that man’s face. Usually, driving scenes are filmed with the actor in the car on the back of a flatbed truck or something, but this dude appears genuinely terrified. Did they make him actually drive on the Dan Ryan while some PA filmed him from the passenger seat? Or worse, did they make him take the local, all-exits route? That’s fucking Thunderdome, man.

Or maybe this is just more of Mark Linn-Baker’s superb acting (no, seriously, watch My Favorite Year or listen to A Year With Frog and Toad, the dude is gifted as fuck) and he’s portraying Larry’s anxiety at nearing freedom from the Red Village at last. He’s so close to the finish line, closer than he’s ever gotten before. But what’s that in the rearview mirror? Oh, it’s only a rust-colored Dodge Dart. His fear is at a fever pitch now, but if they haven’t followed him this far, they probably aren’t following him. 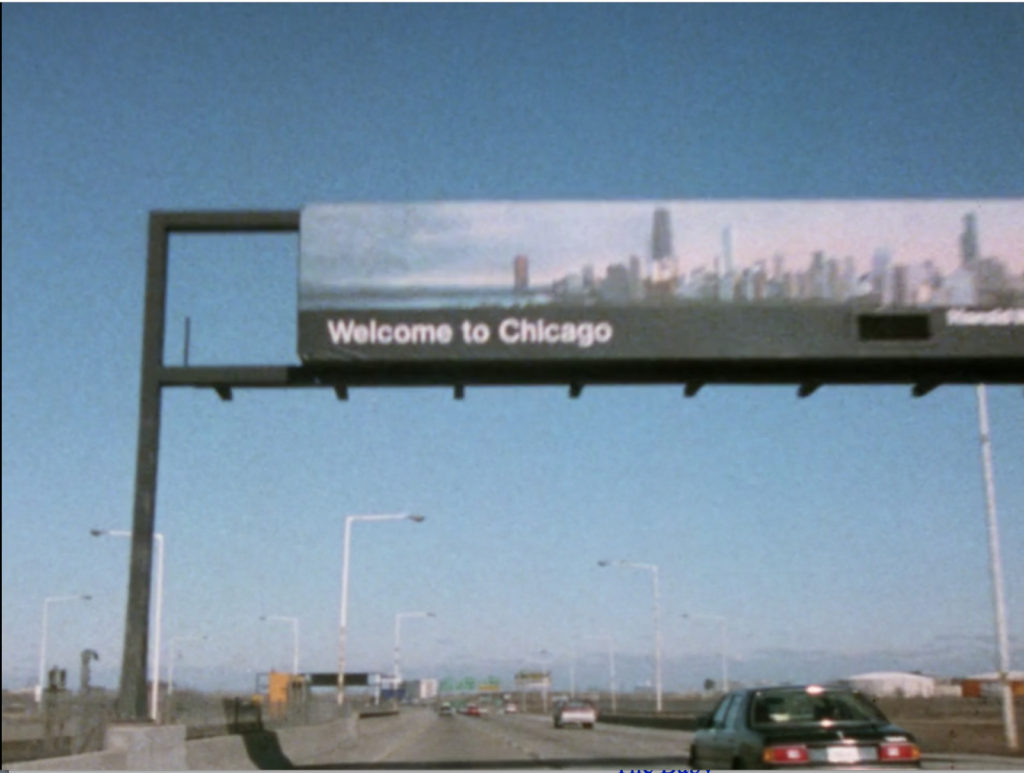 The credits finally close out with a bookend of the opening shot, clocking in at a whopping one minute and twenty-nine seconds. They don’t make ’em like that anymore. And maybe that’s because of the sheer amount of creative energy that had to go into making them. There is a backstory here. And if there isn’t a backstory here and I’ve read way too much into it due to all this marijuana, the fact remains that there were enough side characters to spark even the possibility of those storylines in my head. In fact, there are more side characters in the season one opening than there are regular side characters in all of season one combined.

So, there you have it. I bet you’re feeling particularly foolish for having read this far, but trust me: you can’t possibly feel as foolish as I do for writing it.