State Of The Trout: Fits and Bursts and Bits and Pieces

The year of Chaotic Creativity is…really quite something, so far. It might seem from the lack of recent posts here that I haven’t been doing much. Boy. Howdy.

Once I accepted two very important things, my creativity exploded. Those two things: my brain doesn’t work on a schedule and I’m not a failure if I don’t finish something every single day. As a result, I’ve been chugging along, putting bits and pieces into both blog business and the following things:

Now, will any of this pan out? Who the hell knows? I’m using the patchwork approach to my blog and my Patreon and multiple other projects that must be released this year, like Queen of Hell (the sequel to Nightmare Born) and In The Blood (the first of hopefully many monster-fucking books I’ll release as Jennifer Morningstar), so I feel like please expect everything to come in fits and bursts and let’s see how this approach works going forward. But I can honestly say that this is the most creatively fulfilled and positive I’ve felt in a really, really long time. The other day, I wrote so much by hand that I ran out a whole brand new ink pen.

Also, you know those afghans people crochet or knit that have colors based on the temperature every day? And then at the end of the year, it’s like, here’s my blanket that shows what the weather has been like?

I made one of those, but different.

This is my pain blanket on the last day of January: 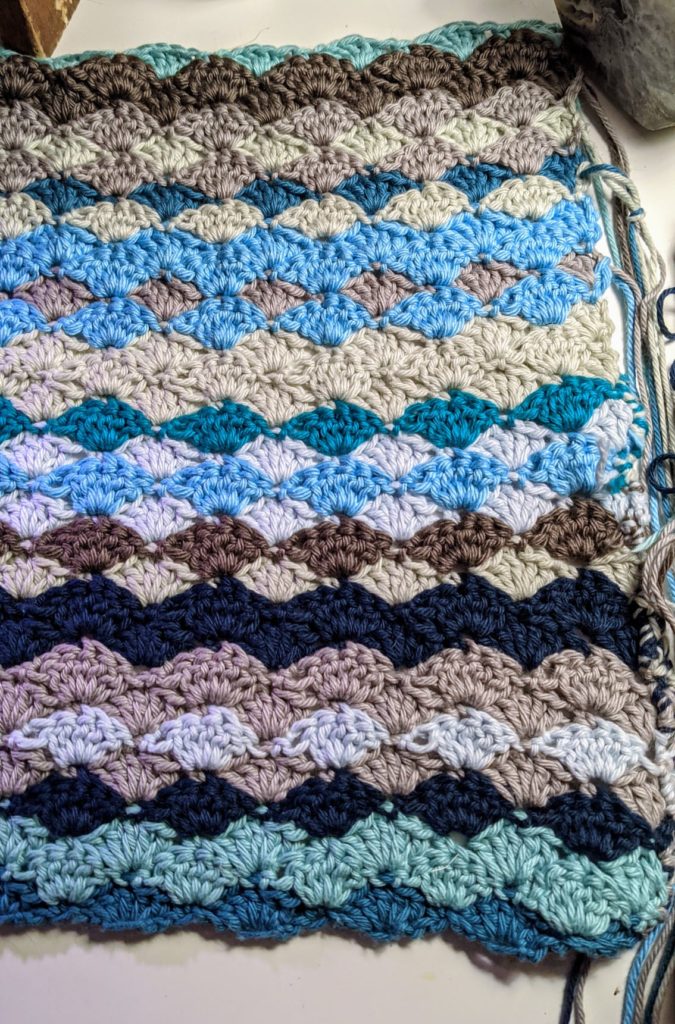 Every day, I keep track of the pain that I’m in and assign it a level based on the standard numerical pain scale. I would show you a physical example of which colors correspond to which pain level, but I spilled coffee on my bujo page where I’d made this lovely layout with pieces of the yarn and their colors and the dye lot. We’re gonna just settle on this.

This will be the only time I’ll be able to show it to you spread out on a table. This section is actually about 50″ wide, so you’re only seeing a very small bit of it. When it’s done and blocked, it’ll be big enough for a queen-sized bed (if I did the math right). I started off with an actual blanket pattern, then I was like, nah, I’ll just do row after row of shells. It’s easier for watching tv and not paying attention, it will look the same on both sides, and it will catch up faster when I have days I can’t work on it. One row for each day, Pima cotton because if I’m spending a year on it, so I  want it to be sturdy.

And at the end of the year, when all is said and done, I’ll have a fine blanket to snuggle up in and a cool visual reminder that I’m not a superhuman who is choosing to fail at life. I am a disabled person who has to fight through tons and tons and tons of pain and if you consult that there chart for January, I’m finding out that I’m in worse shape than I thought.

Buffy/Angel Recaps are ending. After the events of the weekend, I can no longer pretend that separating the art from the artist is possible for me in this case. When I watch the show now, all I see are abused and traumatized young women. I’m so pissed off at Joss Whedon for abusing actors that the fandom had come to love as their real, human selves. I can’t watch my “friends” anymore knowing they were in such a terrible situation. It doesn’t feel right. I know this is disappointing and it sucks, but as more and more about Joss has leaked out over the years, the reality was getting harder and harder to overcome.

Finally, I bring you the gossip that you deserve: I know I said I was never, ever, ever going to give her publicity again, but I thought this was definitely petty enough to post. Jamie McGuire, writer of the infamous “cum-burping gutter slut” line, now has an OnlyFans. 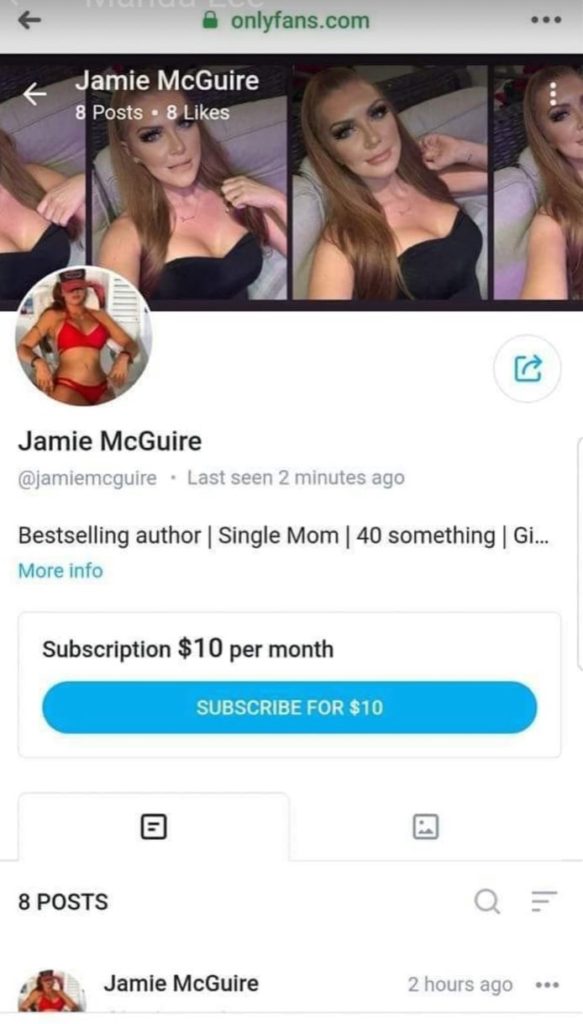 Look. I don’t care if someone has an OnlyFans account, okay? Maybe I’ll set up an OnlyFans account and it will just be me staring vacantly into the camera while I eat eggs. And I don’t know what kind of content she has on there. It might be nudes and I not paying ten dollars to look at freckly middle-aged caucasian skin. I’m just not into it, okay? I’ve got literally yards of my own. But even if she’s on there spreading beaver, fine. She has the right to do that. Not my beaver, not my business.

What is my business is that a woman who has made it her life’s mission to call other women sluts and whores and even ran for office as a misogynist piece of GOP anti-choice trash has her cups runnething over on a site associated with sex work. I don’t care if someone gets their tits out on the internet for profit. I do care if someone gets their tits out for profit while maintaining that only sluts and whores lose their virginities or whatever the fuck she was trying to get across in her pointless books. The constant hypocrisy that rolls like a tide of sewage onto the medical-waste-strewn beach of the Christian conservative thought process never ceases to disgust me.

Bonus, she’s taking a vacation right now. In Jamaica, a country with hit-or-miss medical care facilities. During the pandemic.

And you know she’s probably a fucking anti-masker.