So, here’s a quick rundown of episode four: Morgana wants to go on a pilgrimage to her father’s grave– which must be the shortest pilgrimage of the entire Middle Ages, because her father’s grave didn’t seem that far away the last time we were there– and she and Gwen get kidnapped by this guy named either Hangus or Angus, I don’t know. Morgana gets away, but Gwen is injured and stays behind so Morgana can escape, and Hungus takes her to Lord Commander Mormont, who didn’t know what Gwen looked like in the first place. He wanted to ransom her, and I guess he paid this Hingus dude to get her. When Gwen gets there, she finds out Lancelot is like an ultimate cage fighter or some shit, and they’re put in the dungeon next to each other, so they get a chance to fall in love. Mormont finds out Gwen is not Morgana, and Lancelot tries to save her. Mormont decides to feed Gwen and Lancelot to a Rodent of Unusual Size, but Arthur and Merlin show up and save them. And the whole time Arthur and Merlin were looking for Gwen, Merlin was like, “You like her. You know you like her.” And at the end Arthur is like, “Yeah. I like her,” and Morgana is all, “Yay! Gwen’s back!”

If I had written this episode, I would have changed: They could have left out the scene where Uther was like, “No, you can’t go rescue Gwen, she’s just a servant,” because it seems like that was pretty much implied now that we know him.

The thing I loved most about this episode: I like the very subtle thing the writers slipped in here, that Gwen could be convincingly passed off as noble and the only thing that gave her away definitively were her hands. That’s one of those things that convinces the viewer, without bludgeoning them over the head, that the relationship between Arthur and Gwen, and her eventual ascension to the throne, is realistic.

The thing I hated most about this episode: Gwen isn’t a damsel in distress. The role doesn’t suit her. She went from helping Morgana ambush Herngus to basically just being like, “Oh, I’ll wait here for a dude to rescue me. Doesn’t matter which dude. So long as I get out.” It was brave of her to stay behind to help Morgana, but her ankle was jacked up, so she didn’t really have a choice.

Something I never noticed before: How superfluous Merlin is to this storyline. 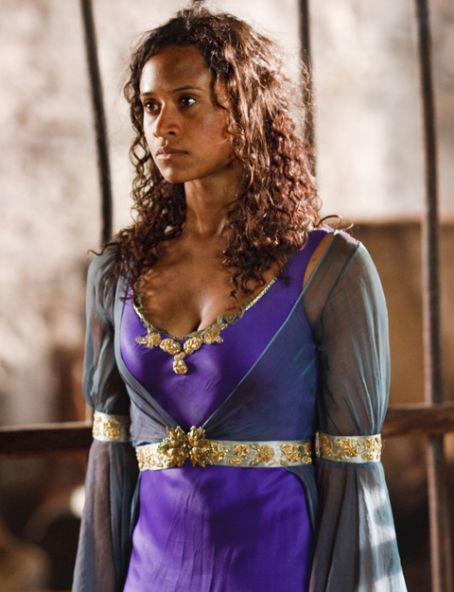 I think she wore it better. I also think that’s why her color palette for the show is predominately blues and purples. They suit her.

Here is proof of some random headcanon I created: There’s more weird vibe in this one. I’m going to write a fanfic that splits off from near abouts this episode and rewrite the entire series, though.

What object would Bronwyn steal from this episode? Morgana’s chemise: 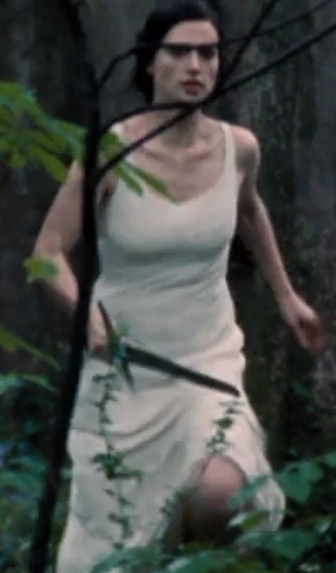 But she would spill red wine all over it at our annual writer’s retreat.

What Merthur moment did Jess have the naughtiest thoughts about? I predict that Jess doesn’t like this episode, because Gwen is fucking up all her plans.

That’s it for this week. Join us on Monday as we watch S02E05 and E06, “Beauty and The Beast” in a two-part double header at 8pm EST on the hashtag #MerlinClub.