So, here’s a quick rundown of episode eight: A bunch of different kings come to Camelot to negotiate a peace treaty or something, and one of them is not interested in peace with Camelot at all. So he has his super obnoxious jester dude ensorcel (why have I not used that word in these posts yet? It’s such a great word!) Arthur to make him fall in love with Princess Vivian, the daughter of a king who is way uptight about shit like guys liking his daughter. Vivian doesn’t like him, though, so she needs to be enchanted, too. Under the influence of the love spell, Arthur challenges Vivian’s father to a fight to the death. The only thing that will break the love spell is true love’s kiss or whatever, but Gwen is pissed because Arthur totally threw her over for Vivian in a really hurtful way. Merlin convinces her to kiss Arthur, breaking the spell, and Arthur ends up sparing Vivian’s dad’s life. All the kings leave, and everything goes back to normal, except wait…

If I had written this episode, I would have changed: The ending. Vivian leaves with her father, but she’s still under the influence of the love potion. Does it wear off? If the only way to fix it is true love’s kiss or whatever, how will she get out of the love spell? She won’t fall in love with anybody else. So, will she live the rest of her life in tortured longing because nobody thought to unmagic her? That’s horrible.

And let’s talk about annoying jester guy. Annoying jester guy is chained to his master’s horse and presumably dragged to death. And everybody is okay with this. Merlin is even smiling while the guy is jogging after the horse, like, “oh, what a wacky way to die.” There’s no justice against the king, but the jester who did that king’s bidding is going to die horribly? This is not a satisfying ending.

The thing I loved most about this episode: I love any episode where Arthur is under the influence of a spell, no matter what the spell is doing.

The thing I hated most about this episode: That Gwen apologized to Arthur at the end! She didn’t do anything wrong. Yeah, he was under a spell, so he wasn’t responsible for his actions, but that doesn’t mean the blame automatically shifts to her. I can’t for the life of me understand why she apologized for the hurt she had allegedly caused.

Something I never noticed before: A dude makes a butterfly appear from thin air in the middle of the great hall, and Uther thinks it’s so clever. Yet someone recovers from an illness too quickly for his liking and it’s all, “Sorcery!” This guy would flip his shit over a card trick. Why is he so okay with magic butterflies? This isn’t Beauxbatons.

Favorite Costume: None from this episode.

Here is proof of some random headcanon I created: None from this episode.

What object would Bronwyn steal from this episode? This week it isn’t actually a gag about Bronwyn taking Arthur home. See the doorway behind them, with the weird celtic knot looking lattice? Bronwyn would put one of those in her house in a heartbeat. 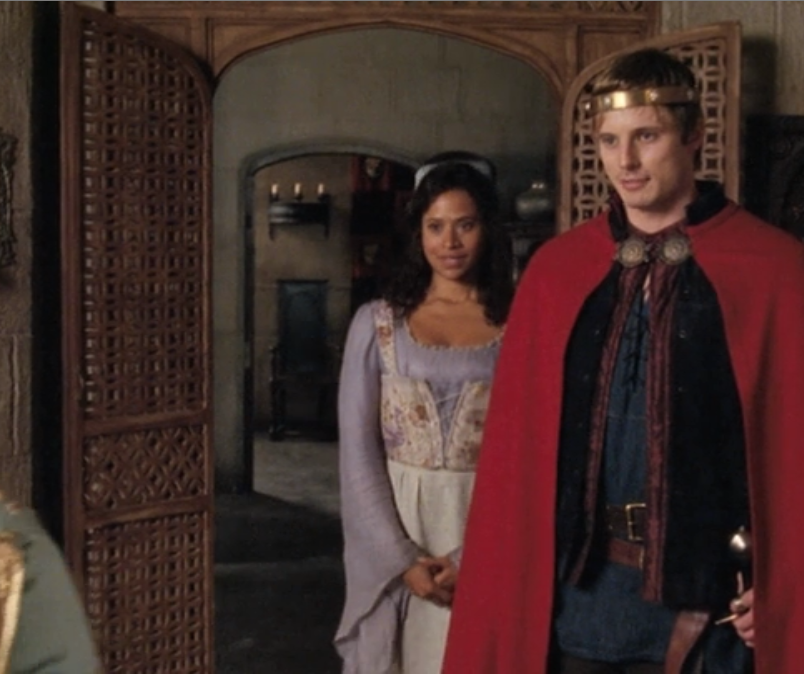 What Merthur moment did Jess have the naughtiest thoughts about? Literally the entire thing; it is Merlin trying to make Arthur un-fall-in-love-with someone, after all.

That’s it for this week. Join us on Monday as we watch S02E10, “Sweet Dreams” at 8pm EST on the hashtag #MerlinClub.