Merlin Club S03E05 “The Crystal Cave” or “Ewww OH MY GOD THAT’S HER DAD? That’s fucking gross, dude! AM I THE ONLY ONE WHO’S GROSSED OUT HERE?”

So, here’s a quick rundown of episode five: After Arthur is wounded in the Valley of the Fallen Kings, some Random Mystical Dude wanders up and takes Merlin off to the Crystal Cave (again), where he sees this crazy vision of Morgana murdering Uther.

The Crystal Cave, incidentally, is what I call Bronwyn Green’s office.

Random Mystical Dude told Merlin to use what he sees “for good,” but Merlin does the opposite and decides to stop Morgana from killing Uther for some reason. Because we’re all still supposed to be stoked that he’s alive, I guess? So Merlin follows Morgana and stops her by giving her a closed head injury, which is basically a death sentence. Uther is all, “save her by any means necessary, and by that I mean do magic because it’s different when I want something via magic,” and then he’s like, “oh, beeteedubs, she’s my daughter.” And I’m like, “OMFG THEN WHY WERE YOU MAKING FUCK EYES AT HER FOR THE PAST TWO AND ONE THIRD SEASONS?!”

Merlin calls the dragon and forces him to help save Morgana, and of course when she’s awake again, she immediately tries to kill Uther. In fact, she’s even more pissed off at Uther than before, because he won’t acknowledge her as his heir. Merlin realizes that by trying to stop the future from happening, you make the shit you don’t want to happen actually happen. He and Morgana fight, she sets the castle on fire, and he implodes a window to stop her from killing Uther. Merlin learns nothing, just like every week.

If I had written this episode, I would have changed: The entire dynamic between Uther and Morgana for the rest of the entire series forever. Seriously, this episode took me by such gross, gross surprise, because Morgana being Uther’s daughter just doesn’t follow the rest of the series before this. I’ve pointed out the dodgy moments up until here, but think about if you were watching this show and you didn’t know that Morgana was biologically related to Uther. When he’s at her beside saying:

“I cannot watch her die, Gaius.”

“No, you don’t understand. I cannot lose her. No matter what happens, she cannot die.”

I’m thinking, “Okay, here it comes. He’s going to say he’s in love with her, and then she’s going to be forced to marry him, and that will make her queen, and she’ll murder him on their wedding night, and it will be all dramatic and she’ll rule Camelot in darkness etc.”

And then he outright asks Gaius to use sorcery to cure her:

“No, Gaius. Whatever it takes. Whatever, I don’t care. You must save her.”

“I don’t care what remedy you use.”

“There must be something. Something in the old religion?”

Who was the last person he used sorcery on? HIS WIFE. So, it’s on, right?

“Gaius, you don’t understand. There’s something you should know. Something I’ve told no one. Morgana is my daughter.”

WHAT THE FUCK, WRITERS?! This is something I didn’t see coming–and not in the good way where you sit back and admire the skill with which the plot was subtly woven in and yet so obvious in hindsight. It was in the holy shit, this makes no sense and I feel like I’m suddenly watching an entirely different show way. You know. The Moffat way.

The thing I loved most about this episode: The way Morgana’s dress billows in this scene: 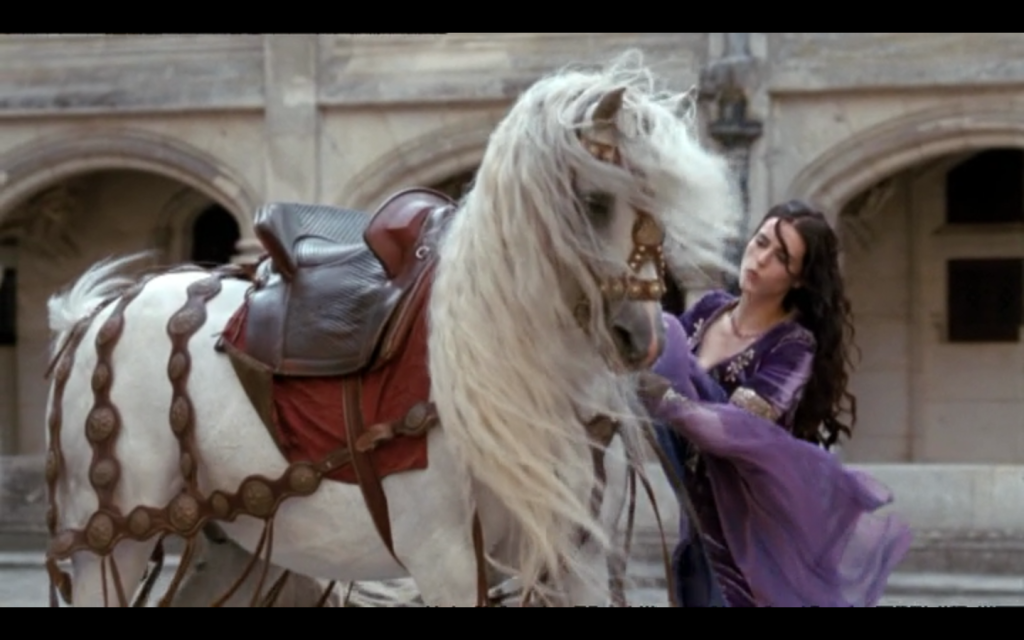 It’s really the only thing good about this episode.

The thing I hated most about this episode: Besides the obvious, I really dislike how many mysterious forest dwelling sorcerers magically appear to Merlin all the time. Oh, and the fact that Merlin can never decide what he wants and is always flip-flopping. He was willing to poison Morgana when he just suspected she might be a danger to Camelot. Now he knows for sure that she’s going to murder the king, and Merlin just can’t let her die? Bullshit, I sayeth.

Something I never noticed before:  Gaius’s Harry Potter glasses. Which leads me to: 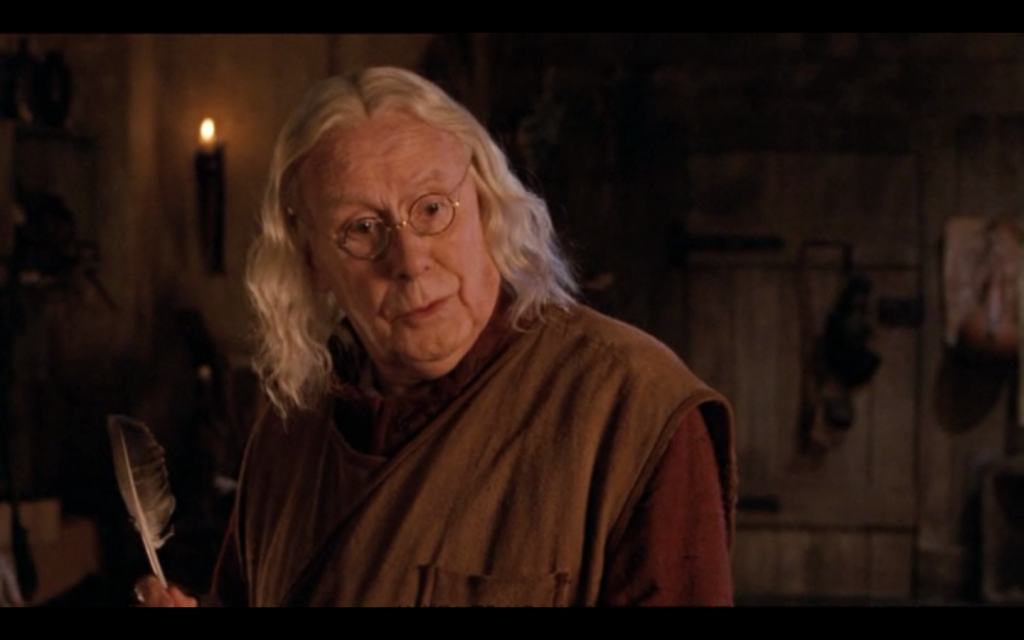 Here is proof of some random headcanon I created: This episode is blunt, jarring proof of my RPF head canon about the writers and show runner(s), and how they either didn’t notice or didn’t care that their hidden daughter B story was turning into some kind of backwoods isolated mountain community horror movie family dynamic.

What object would Bronwyn steal from this episode? I think a mirror you could write messages on, then reveal with your breath, would be something up Bronwyn’s alley. Her youngest son would probably steal it from her, but I think they would both be thrilled by it: 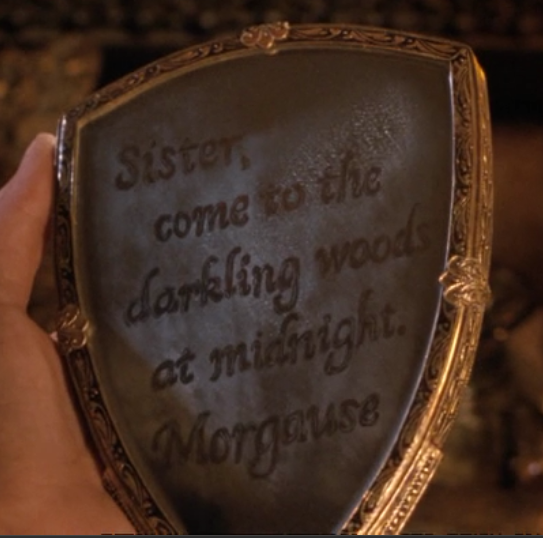 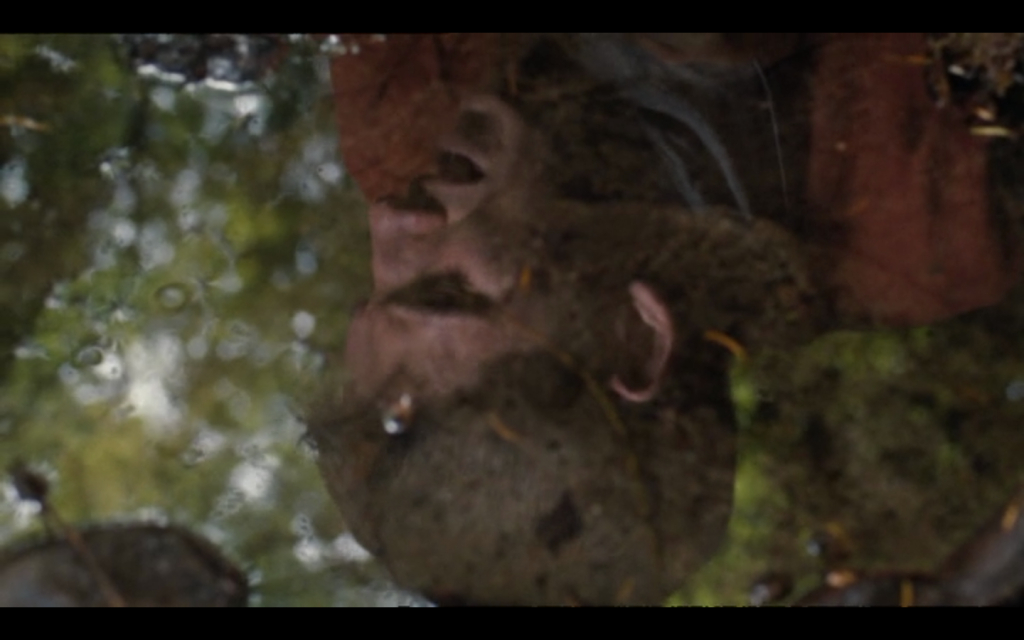 Merlin, crying and washing Arthur’s blood off his hands. So much angst fic in this, guys.

That’s it for this week. Join us next week for S03E06, “The Changeling,” Monday,  8pm EST on the hashtag #MerlinClub.