Merlin Club S04E09 “Lancelot du Lac” or “I get it, Lancelot from the Lake. That’s clever.”

So, here’s a quick rundown of episode nine: After Arthur proposes to Gwen, Morgana brings Lancelot’s shade to life to romance Gwen and get her to have a lapse in judgment. Because they had feelings for each other before. I feel like I’m over-explaining this. Anyway, everybody is like, super happy that Lancelot is back, except Merlin who is like, isn’t there something fishy about a dude just casually strolling back from the dead? Lancelot is just there to act out Morgana’s plan to keep Gwen from the throne. Gwen gets all enfuckingsorcelled and Agravaine takes Arthur to catch Gwen and Lancelot kissing. Arthur physically hurts Gwen during the ensuing argument, then banishes her from the kingdom on pain of death. Agravaine orders shade!Lancelot to kill himself, and Merlin gives him a viking funeral.

If I had written this episode, I would have changed: The entire plot line of this season from here out. I so dislike these developments, you guys.

The thing I loved most about this episode: When Arthur proposed to Gwen in all that beautiful candlelight.

The thing I hated most about this episode: That in the argument between Arthur and Gwen, Arthur grabs Gwen and hurts her. That and the fact that anything post tournament happens.

Something I never noticed before: Is it just me, or is Merlin getting really good at disposing of bodies? 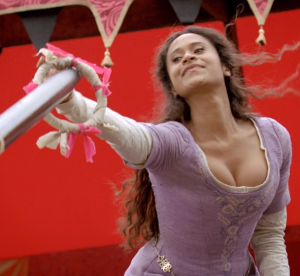 Here is proof of some random headcanon I created: Nothing for this episode.

What object would Bronwyn steal from this episode? I think she should take Ol’ Sewy Eyes here home with her: 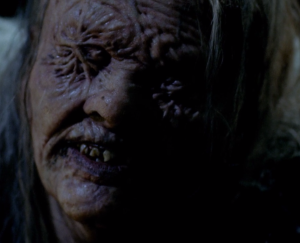 She’s already down there.

Merlin: “Well, as romantic gestures go, you could have given her flowers. Could have had a song written. Instead you’ve given her two days of sweaty men knocking the sense out of each other.”

Arthur: “Exactly as it should be.”

Tell me those lines weren’t blatant fan service dished out especially for a Merthur diehard like Jess.