Don’t Do This Ever (an advice column for writers): Plagiarism Warning edition

If you’re an author of paranormal, cowboy, SEAL, firefighter, highlander or motorcycle club romances, I urge you strongly to look through the extensive backlist of one Laura Harner, an unusually prolific author of M/M (male/male) romance. So prolific, in fact, that her GoodReads author page lists seventy-five releases since 2010.

If you’re not quick with math, that averages out to 15 novels a year. Some authors do put up those numbers, but their output is considered exceptional. Harner’s output is exceptional for a wholly different reason.

HOLY CRAP — do people have no morals about STEALING these days? I was just notified by a reader that she started reading M/M romance recently and read a book by another author that is almost VERBATIM my book My Kind of Trouble with the exception it’s a m/m book!! I need a recommendation for a good literary attorney fast!!

McGraw provided these two photos for comparison (I’ll excerpt some text to follow for those unable to see pictures, as there’s a lot of text). The first is McGraw’s My Kind of Trouble: 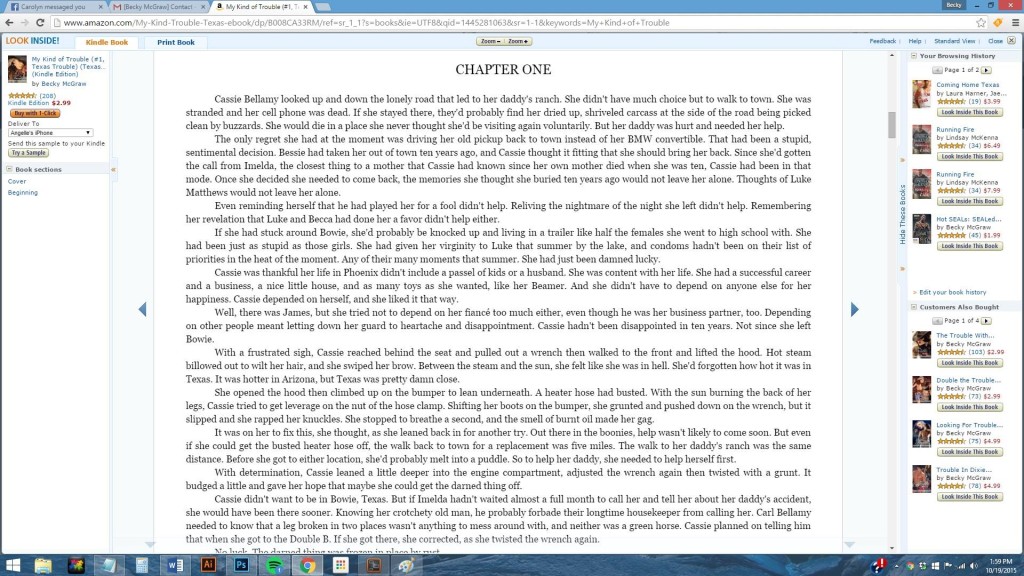 And the second is Harner’s most recent release, Coming Home Texas, which has now been removed from retailers: 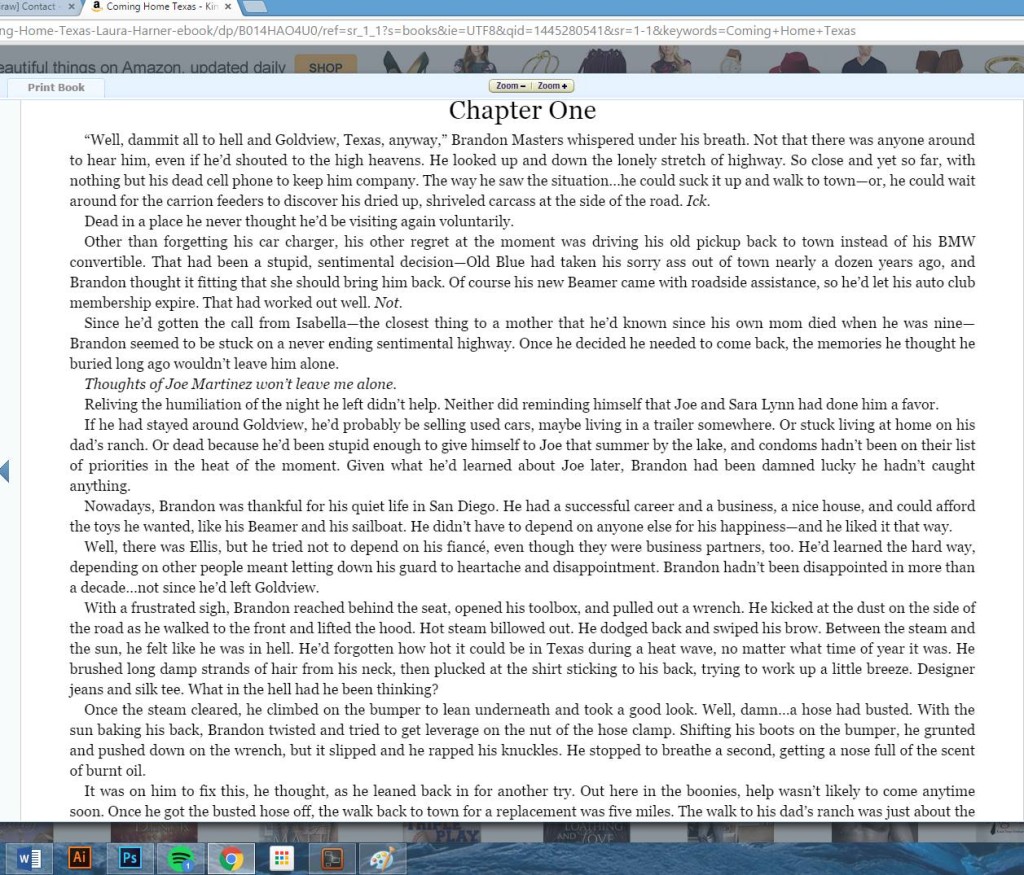 Let’s do some comparison reading, shall we? First, McGraw’s opening paragraph:

Cassie Bellamy looked up and down the lonely road that led to her daddy’s ranch. She didn’t have much choice but to walk to town. She was stranded and her cell phone was dead. If she stayed there, they’d probably find her dried up, shriveled carcass at the side of the road being picked clean by buzzards.

“Well dammit all to hell and Goldview, Texas, anyway,” Brandon Masters whispered under his breath. Not that there was anyone around to hear him, even if he shouted to the high heavens. He looked up and down the lonely stretch of highway. So close and yet so far, with nothing but his dead cell phone to keep him company. The way he saw the situation…he could suck it up and walk to town–or, he could wait around for the carrion feeders to discover his dried up, shriveled carcass at the side of the road.

Well, it’s not exactly the same, right? maybe it’s a coincidence? Let’s look at some more:

The only regret she had at the moment was driving her old pickup back to town instead of her BMW convertible. That had been a stupid, sentimental decision. Bessie had taken her out of town ten years ago, and Cassie thought it fitting that it should bring her back. Since she’d gotten the call from Imelda, the closest thing to a mother that Cassie had known since her own mother died when she was ten, Cassie had been in that mode. Once she decided she needed to come back, the memories she thought she buried ten years ago would not leave her alone. Thoughts of Luke Matthews would not leave her alone.

Other than forgetting his car charger, his other regret at the moment was driving his old pickup back to town instead of his BMW convertible. That had been a stupid, sentimental decision–Old Blue had taken his sorry ass out of town nearly a dozen years ago, and Brandon thought it fitting that she should bring him back. Of course his new Beamer came with roadside assistance, so he’d let his auto club membership expire. That had worked out well. Not.

Since he’d gotten the call from Isabella–the closest thing to a mother that he’d known since his own mom died when he was nine–Brandon seemed to be stuck on a never ending sentimental highway. Once he decided he needed to come back, the memories he thought he buried long ago wouldn’t leave him alone.

Even reminding herself that he had played her for a fool didn’t help. Reliving the nightmare of the night she left didn’t help. Remembering her revelation that Luke and Becca had done her a favor didn’t help either.

Reliving the humiliation of the night he left didn’t help. Neither did reminding himself that Joe and Sara Lynn had done him a favor.

If she had stuck around Bowie, she’d probably be knocked up and living in a trailer like half the females she went to high school with. She had been just as stupid as those girls. She had given her virginity to Luke that summer by the lake, and condoms hadn’t been on their list of priorities in the heat of the moment. Any of their moments that summer. She had just been damn lucky.

If he had stayed around Goldview, he’d probably be selling used cars, maybe living in a trailer somewhere. Or stuck living at home on his dad’s ranch. Or dead because he’d been stupid enough to give himself to Joe that summer by the lake, and condoms hadn’t been on their list of priorities in the heat of the moment. Given what he’d learned about Joe later, Brandon had been damned lucky he hadn’t caught anything.

Cassie was thankful her life in Phoenix didn’t include a passel of kids or a husband. She was content with her life. She had a successful career and a business, a nice little house, and as many toys as she wanted, like her Beamer. And she didn’t have to depend on anyone else for her happiness. Cassie depended on herself, and she liked it that way.

Well, there was James, but she tried not to depend on her fiancé too much, either, even though he was her business partner, too. Depending on other people meant letting down her guard to heartache and disappointment. Cassie hadn’t been disappointed in ten years. Not since she left Bowie.

Nowadays, Brandon was thankful for his quiet life in San Diego. He had a successful career and business, a nice house, and could afford the toys he wanted, like his Beamer and his sailboat. He didn’t have to depend on anyone else for his happiness–and he liked it that way.

Well, there was Ellis, but he tried not to depend on his fiancé, even though they were business partners, too. He’d learned the hard way, depending on other people meant letting down his guard to heartache and disappointment. Brandon hadn’t been disappointed in more than a decade…not since he’d left Goldview.

Getting a sense of why, exactly, McGraw felt she had been plagiarized?

McGraw alerted her editor, who compared the books side-by-side, and highlighted the similarities on one page: 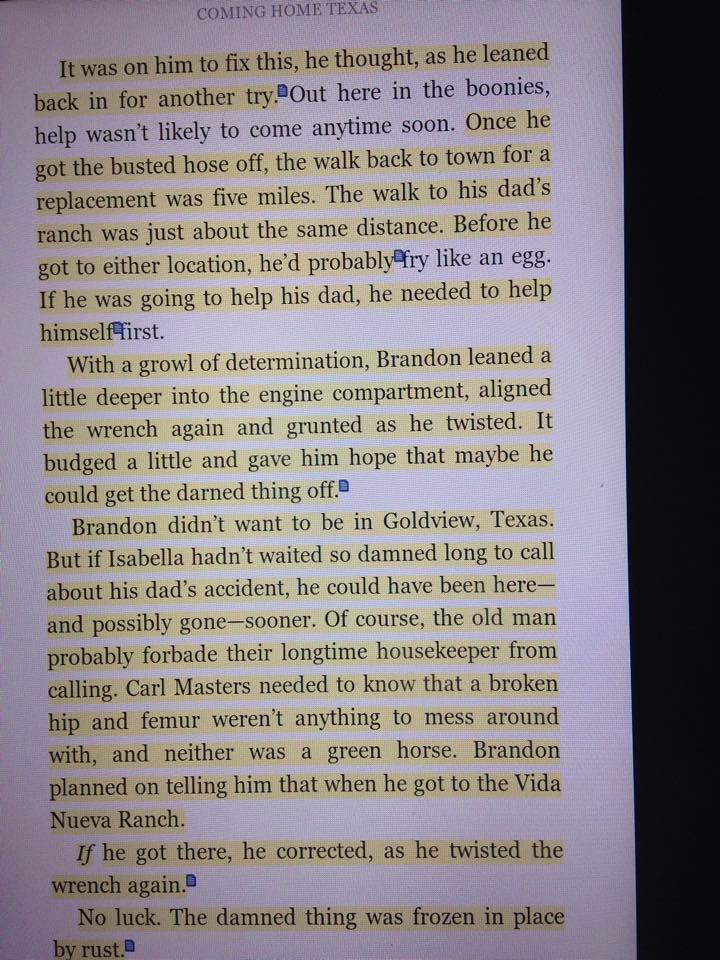 I stopped reading and writing M/M a while go, from sheer burnout, but from what With such high visibility, why did she think she wouldn’t get caught? [EDIT: I’m sorry, it’s McGraw who’s the New York Times and USA Today bestselling author. Which makes this even more bizarre. Why plagiarize someone with that kind of audience?]

Because Harner writes M/M, and McGraw’s book is a straight pairing. Harner’s clever trick here was to pick a book that was not M/M, but M/F contemporary romance. As far as readers go, there isn’t a lot of overlap between the two genres; M/M readers will in general read M/M voraciously, while M/F readers won’t stray to M/M often, either. What were the chances of a reader from both genres just happening upon both the plagiarized book and the book it was plagiarized from? With seventy-five books to her credit, she’s certainly skated by for a while without getting caught.

Since McGraw’s Facebook post, Harner has pulled ten of her titles from retailers, including Coming Home Texas. This seems to indicate that other titles have been plagiarized. I urge anyone who writes in any of the genres I listed at the top of this post to review Harner’s catalog before she pulls the rest in her desperate attempt to sweep her theft under the rug.

Look. We’re all grownups. We know not to steal each other’s work. And yes, sometimes a line or two will be subconsciously lifted from another work we’ve read. That happens to everyone. But this isn’t an accidental slip of the subconscious. This is deliberate, and not coincidental.  Readers aren’t stupid, authors aren’t stupid. We know the difference between thinking a phrase is original when you’ve just forgotten that you read it before and deliberately copy/pasting someone’s entire book and changing names, pronouns, and a few words here and there– [EDIT: It seems Harner is published on Kobo, or at least some of “her” books are. Should have fact checked that, even though I trusted the source. My bad.]

If you plagiarize, you will get caught. And when you get caught, hopefully your career will end and we’ll never hear from you again. If you don’t want that to happen, the answer is pretty simple: don’t plagiarize, ever.