Quick rundown of the episode: Casual rapist Mark Anthony returns to rome, having been “elected” People’s Tribune. So that means he has the power to veto shit in the senate, which is good news for Cesar, but bad news for Pompey. To become tribune, Mark Antony is subjected to a long ass ceremony, the flashbacks to which are hilarious, because dude just wants to get to Atia’s house to get his knob thoroughly shined up by a consenting women this time.

Pullo and Vorenus take little lord Fauntleroy back to his mother. Atia manages to choke back her vomit at the idea of eating dinner with soldiers, and in a discussion about politics, Vorenus turns out to be FOX News’s convenient plebeian friend, talking about how he thinks the system that’s actively oppressing him is amazing and good for everyone. Pullo, however, becomes a heavy-drinking, hard-fucking, gambling-addicted junkie within two hours inside the city walls. He gets into a bar fight that ends up in an incredibly graphic emergency skull surgery on Vorenus’s kitchen table. The whole town comes out and watches what is basically going to be the most talked about thing on that street for centuries.

Vorenus returns home to find his wife holding a baby that has definitely been born recently and couldn’t possibly be his kid, but surprise, it’s really his grandson. But surprise again, it’s actually his wife’s son, we just don’t know with whom yet.

Mark Antony hands out some sass to Pompey, Scipio, Cicero, and Cato. Basically, try anything, and Cesar is going to be marching into town so fast you won’t know you’re dead until you get the invitation to your own funeral. Scipio breaks ranks and an all out brawl begins in the Senate when he’s like, “Hey, we should sentence Cesar to death if he doesn’t plan on coming back here and apologizing.” The dugouts fucking empty, but it’s okay, because in all the chaos, nothing got finalized. If Mark Antony can just make it to the Senate during the next session to use his veto, then everything is going to be great. Pompey is basically like, “I cannot stress enough that Mark Antony needs to get here without incident. And I’m talking, if you see a pothole in the street, throw your body over it so he doesn’t trip because if there’s any hold up or he thinks he’s being sabotaged, Cesar is going to come back and spank your ass.

Antony is on the lookout for any excuse to run back to Cesar like, “Your friends want to kill you and they tried to kill me when I tried to stop them from killing you, but it wasn’t real dramatic, it was still in the ‘on paper’ stage when I left.” He has his men, including Vorenus and Pullo, surrounded him like Secret Service dudes to keep him safe on his walk to the Senate, and wouldn’t you fucking know it, one of the dudes from Pullo’s bar fight is in the crowd, and he pulls a knife. Pullo subdues the dude, but never bothers to mention to anyone that this guy wasn’t out to kill Mark Antony. He makes himself out to be this big hero as the streets descend into chaos, while Vorenus just gets stabbed for his troubles. Pullo takes all the glory involved in being the dude who rescued Mark Antony, and puts in motion Cesar’s return to Rome to hand Pompey his ass.

In other words, a lot of bad Roman shit could have been avoided if Titus Pullo had just had his gambling addiction under control. Instead, Cesar crosses the Rubicon like a mom with a trash bag coming to clean up your room. And Pompey is the room.

My favorite part of the episode: Women handling shit the way men would handle shit. It might sound terrible to say I like to see women push each other around or say horrible things about setting dogs on people, but damn, these ladies aren’t fucking around. It’s nice to see Niobe shouting “My father’s cock! How’s that for tone?” at her awful husband, or Octavia loudly imitating her mother’s orgasms over dinner. It’s good to know that if someone fucks with Atia, she’s got dogs trained to handle that. They’re flawed and cruel to each other and, yeah, violent, but I’m loving their negative emotions because oh my god, they’re female characters who aren’t written to be the perfect fantasy for dudes who think all their ex-girlfriends are crazy. They’re real people.

My least favorite part of the episode: Despite the whole “Vorenus comes home to slut shame his wife and daughters” bullshit? Nitpick-o-rama time: Vorenus has sex with his wife, his lactating wife, and doesn’t notice that she’s, you know. Lactating. In case you’ve never heard or thought about it before, a person’s tits leak for what seems like ever, we’re talking will-my-shirt-ever-be-dry-again levels of insidious, seeping moisture that happens uncontrollably in hormone fueled situations like getting drilled just feet from a crib full of howling baby. How did he not notice? And I’m not buying that he’s just naive; they already have two kids. This was written by a dude who thought we could just gloss over that reality of boob-haver anatomy. But I can’t ignore that shit. 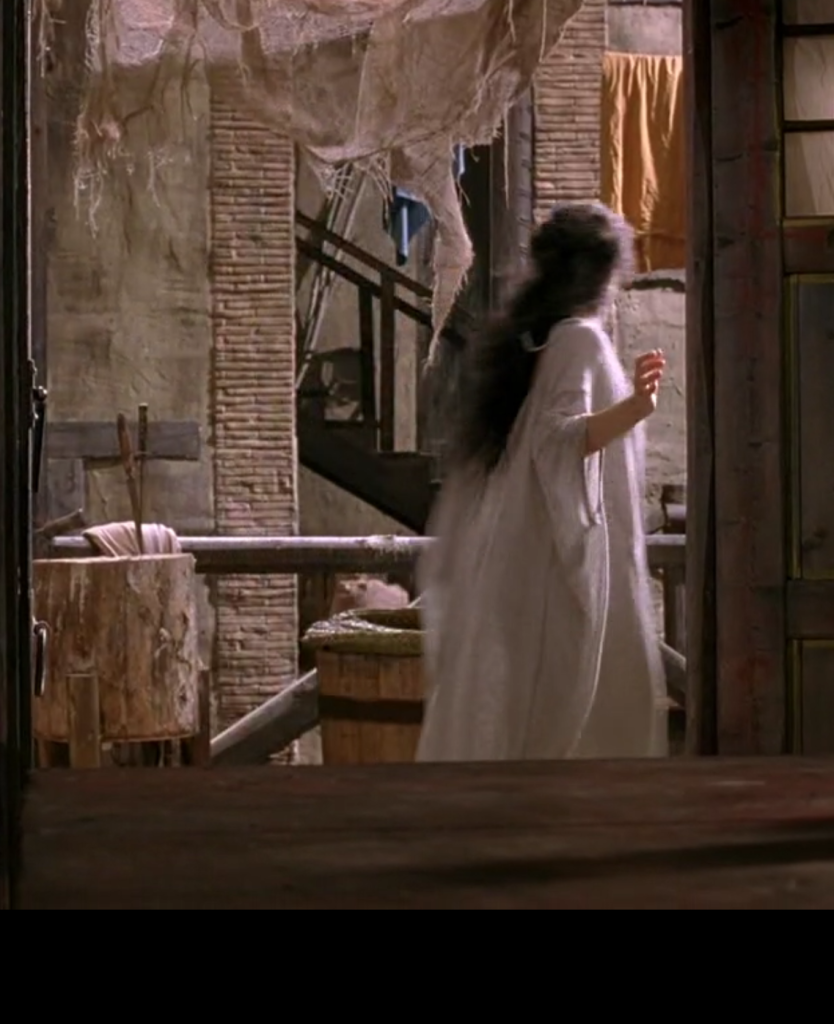 Look at that. It’s almost translucent, so you know the fabric is light as air. It floats around her. I bet that muslin or linen or whatever is butter soft. I want this nightgown. I want to wear something as comfortable as that nightgown.

I covet that nightgown.

Team Atia or Team Servillia: “Casta! Fetch the dogs!” Team Atia, though Servillia wasn’t even in this episode, that I remember.

#LegionXIII the giant ROME is always my fav character pic.twitter.com/Z751ItytqP

I could see Bronwyn coveting both the hair and the dress. I couldn’t catch her when she wasn’t blurry, though.

Guess Jess’s head canon. “Oh my  god, did you see how hurt Pullo looks every time someone says Vorenus isn’t his friend?”

Now go check out Bronwyn’s and Jess’s posts, and join us on Monday at 9 PM EST for season one, episode three, “An Owl In A Thornbush”. Tweet to #LegionXIII to join us!