#LegionXIII Rome watch-along S01E07, “Pharsalus,” or “Somebody’s landed on the Isle of Lesbos, and it sure ain’t Pullo or Vorenus”

Quick rundown of the episode: Despite being the dick who doomed his own ship by pissing off Triton, God of the sea and father of the brattiest mermaid in history, Pullo survives. He and Vorenus end up marooned on a sandbar together, where they debate the merits of blood drinking and Pullo is just generally not worried about the fact that they’re dying of thirst. Vorenus, however, is a man of action, and he decides the only way to survive is to ride a raft made of corpses out of his personal hell. Which is being alone with Titus Pullo for any length of time.

Things in Caesar’s camp are not going great. People are eating rats. Meanwhile, Pompey and his band of traitor bastards are eating like kings. They’re pretty sure that rather than starve Caesar out, they can fight Caesar’s army in a great big battle and get the whole conquest of Rome over (spoiler alert: it’s the battle of Pharsalus and this is a bad idea).

Atia is pretty sure her uncle is going to lose, so she sends Octavia to see Servilia, to beg for protection. Octavia gets all prettied up to go see Servilia. Since Servilia is the only human being who is remotely nice to her, Octavia immediately crushes on her hard and spends some time strumming her downstairs lute after their meeting. Later, Servilia invites her over for some “weaving”, the Netflix and chill of ancient Rome, and we see some May/December lady lust.

After a blurry, anti-climactic, grainy slow-motion battle, Pompey is left humiliated and poor, with no where to run but Egypt. And who should he run into along the way? You guessed it! Forrest Pullo, who totally recognize him. They see how beaten down he is and they let him go, which pisses off Caesar. Cicero and Brutus are basically like, I’m tired, I’m going to go home, so they go and surrender to Caesar. All things considered, Pompey gets away pretty easily. He arrives in Egypt with his wife and children, who get to watch as a servant of the Pharaoh cuts Pompey’s head off before he can even get a foot on the shore.

My favorite part of the episode: “Doesn’t matter. Everything’ll be fine.” -Titus Pullo, the Chris Traeger of Ancient Rome.

My least favorite part of the episode: Lyde and Naiobe’s reconciliation. It’s not that big a deal to get disowned if you’re just going to get reowned in the next episode.

Favorite costume: Octavia’s purple dress and veil. I would wear the non-stop fuck out of that. 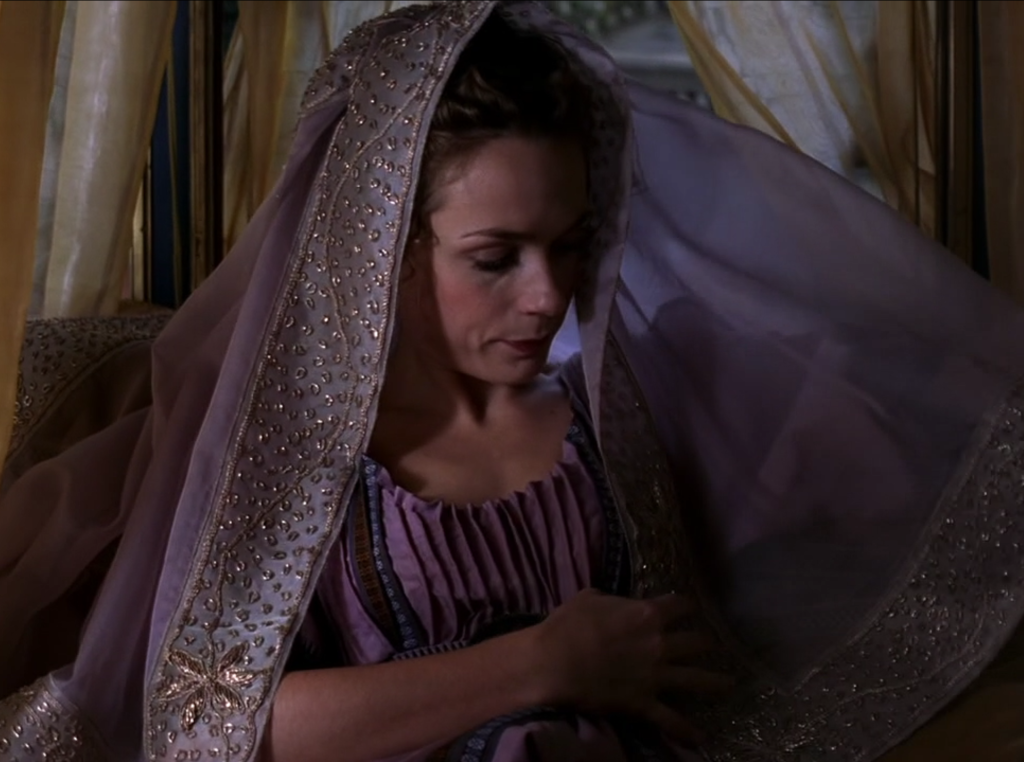 Team Atia or Team Servilia: Team Servilia, because Atia said Servilia looks like “an old trout”. WTF is wrong with being a trout, huh? That’s what I thought. So Servilia wins this round. Doesn’t feel good, does it Atia?

What hairdo or costume would Bronwyn steal? I was going to be funny and pick the silver replacement nose guy, but I think we’re probably in agreement about the Octavia

Guess Jess’s head canon. They’re stranded on an island together. This one is a no-brainer.

Now go check out Bronwyn’s and Jess’s posts, and join us Monday at 9 PM EST for season one, episode eight, “Caesarion”. Tweet to #LegionXIII to join us!