Revisiting My Backlist: SUCH SWEET SORROW or, “What Came First: The Characters of Such Sweet Sorrow or The Idea to Retell R&J and Hamlet?”

CW: This post talks about Shakespearean tragedies that feature suicide.

If you’re looking for some great YA reads (Like A.L. Davroe’s Nexus, for example), Entangled Publishing is promoting their YA retellings of classic stories. Guess who’s included? 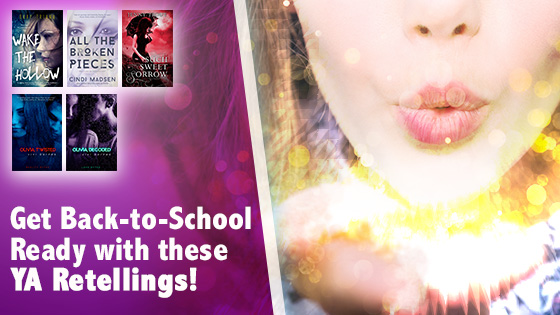 Since Such Sweet Sorrow is on-sale this week for 99¢, I told the folks at Entangled that I would share exactly where the idea came from, specifically, in what order did such an unlikely story even became a thing? Did the concept come first, or the characters?

If we exclude the fact that Romeo and Juliet and Hamlet already existed long before my version of them did, then the idea definitely came first. A few years ago, I teamed up with an incredibly creative guy, Nick Harris. He wanted to explore the idea of what happened after Romeo & Juliet, and what would happen if the titular characters of the play met another disenfranchised teen from Shakespeare’s works. He felt my writing clicked with the concept–Romeo and Hamlet as Ghostbusters. The first time we talked about it, I hung up the phone thinking it was the most bonkers idea and it would never, ever work.

As we started to hammer out the plot together, I felt a bit like I was playing with someone else’s dolls. Romeo, Juliet, Hamlet, and their supporting characters were written by one of the most celebrated and legendary authors of all time. They’d been brought to life on stage by countless actors, made into beloved pieces of cinema, and been retold by storytellers so often that it seemed like there was no place else to take them. Hadn’t everything already been said? How was I supposed to bring anything new, anything my own, to these characters?

I started to think about them in terms of the criticisms that have become so popular over the years. Romeo and Juliet are stupid, they shouldn’t have killed themselves for love, they were so weak. Hamlet is a whiny, spoiled prince who can’t stand to have things not go his way. These criticisms had always felt wrong to me; when I started to get into their heads, I figured out why.

Juliet wasn’t stupid. She didn’t kill herself just because Romeo died. The plan was never to kill herself at all. She didn’t want to marry Paris, so she married someone else. When that plan didn’t work, she agreed to be interred alive in a crypt to make her escape. And when that didn’t work, when she was backed against the wall and in a position where she was free to marry Paris once again, she took her own life. Juliet wasn’t weak and stupid, she was tragically desperate. I mean, she was willing to face the possibility of waking up in a grave full of rotting corpses in order to save herself. Once I figured that out, I felt like I had a responsibility to return that power to Juliet, to remind people that she was witty and sarcastic and brave. So, I had to put that into the book.

Romeo, on the other hand, was reckless. He threw himself head-first into love with one girl only hours after being rejected by the last one who was supposed to be his great love. The premise of Nick’s idea included Romeo venturing into the afterlife to save Juliet, which gave me the chance to strip everything that caused Romeo’s downfall away. He wasn’t strong anymore, he wasn’t as handsome, the poison had weakened him. He still had his pride, but it was badly wounded, and his temper, which he couldn’t really back up. And just like with Juliet, I started to feel like I could get to know Romeo and put my own stamp on him.

The character I most enjoyed writing, though, was Hamlet. By the time he meets Romeo, Hamlet has come home from college after the death of his father, only to learn that he’s been passed over for the throne, and his uncle is now the king–and his stepdad. There’s not a lot standing in Hamlet’s way in terms of eventually getting the crown, and he believes that his uncle poisoned the late king, so the castle isn’t a safe place. The paranormal element of Hamlet made it feel totally natural to me that Hamlet is a medium, and that being paranoid and constantly surrounded by the dead was probably going to make him a little gloomy and weird. That made total sense to me.

Bringing the three characters together and figuring out their tests and trials in brainstorming sessions shaped the main players a little more with every phone call. So I guess it wasn’t necessarily that the characters came first or the idea came first, but that they came very close behind each other and continued to play off each other and build and grow into what is hopefully a fun, clever book.

Read on for a chance to win a great books from Entangled TEEN!