Merlin Club S01E05, “Lancelot,” or “The one where Merlin is way more concerned with the bro-code than with the outlawing of magic.”

So, here’s a quick rundown of episode five: Merlin is out pigging for truffles when he’s attacked by Buckbeak, who has recently escaped from Hagrid’s garden. Fuck you, Hermoine and your time thing. A dude with gorgeous hair comes along to save him, and it’s Lancelot, a wannabe knight with a really punny name. He can’t be a knight because he’s not of noble blood, and that’s like, the number one requirement for being a knight in Camelot. Merlin gets this super great idea to fake a thing saying he’s a noble, and he gets knighted to help in battle against the griffin who is just out there terrorizing people. But then Uther is all like, let’s check this shit out, and he finds out Lancelot is a fraud, so they kick him out of the knights and exile him forever. So then Merlin is all like, “This isn’t fair!” and helps Lancelot use magic to kill the griffin, and Arthur respects him, so you know that’s going to come up somehow later. Did I mention that Gwen’s panties basically incinerate whenever Lancelot is around? So, yeah, it coming up again later.

If I had written this episode, I would have changed: Merlin’s weirdly intense anger over the Camelot bro-code that excludes all knights. He’s all, “That’s not fair!” Well, what did you expect, Merlin? You live in a place where someone is just accidentally magic and they get their head cut off. You really expect Uther to be fair? Why couldn’t the storyline have just been, “thanks for saving me from this griffin?” rather than, “thanks for saving me from this griffin, now let me JOIN YOU IN THE FIGHT FOR EQUALITY FOR ALL PEASANTS!” It doesn’t ring true, considering how he doesn’t use any of this magic to help, you know. STOP THE PERSECUTION OF MAGIC USERS.

The thing I loved most about this episode: Geoffrey of Monmouth. GEOFFREY OF FUCKING MONMOUTH.

The reason I love this guy– besides the fact that he looks like one of the dudes from the original version of the “Guess Who?” game, is that Geoffrey of Monmouth was a real guy back in the day. He wasn’t just any dude; he was the dude who is the entire reason we know anything about Arthurian myth. He claimed to have a book all about king Arthur and the prophecies of Merlin, and he wrote all about them. He told everyone else to not write about English kings, because he was the only one with the copy of the book that had the “real” story, so I’m guessing it was bullshit to protect his career. But it’s so funny that they included him as a genealogist in this show. Very cool.

The thing I hated most about this episode: In the last episode, Arthur couldn’t save Merlin’s life because Merlin is just a peasant and Uther wouldn’t risk him going into a fucking cave, but this time around, Uther sends Arthur out to save a whole bunch of peasants under way more dangerous and griffin oriented circumstances.

Something I never noticed before: At the beginning, when Merlin is out gathering mushrooms, I always thought he had a pig with him for some reason. But he doesn’t; he’s just digging with his hands. 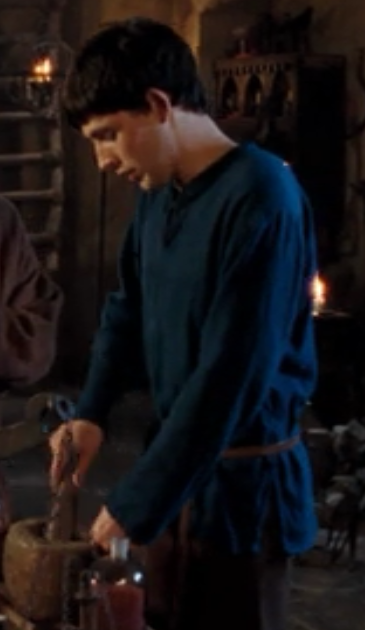 Here is proof of some random headcanon I created: In this episode, Arthur is looking all sexy like at Morgana. Unless the writers were trying to intentionally make us ship a brother and sister, this feeds into my “they didn’t quite know what they were going to do with Morgana yet” theory.

What object would Bronwyn steal from this episode? Morgana’s ponytail.

What Merthur moment did Jess have the naughtiest thoughts about? There wasn’t a lot of Merlin/Arthur interaction in this one, but I bet she ships Lancelot with both of them.

Or check out The Merlin Club drinking game, which, you know. I’m sober, so I can’t endorse it. But it’s still funny.

That’s it for this week. Join us on Monday as we watch S01E06, “A Remedy to Cure All Ills” at 8pm EST on the hashtag #MerlinClub.