So, here’s a quick rundown of episode Eight: A creepy little Omen kid comes to Camelot with his druid father and is promptly made an orphan when Uther cuts the druid’s head off. The thing about this creepy little Omen is that he can talk with his mind or some shit, and Merlin and Morgana can hear him, because they’re all magic, natch. The kid gets an infection and has to be smuggled out of Camelot. But when Morgana tries to help the druid of the corn, she gets caught and to say Uther is not okay with that is an understatement of incredible proportions. Merlin wants to help, but the dragon is all, “Heads up, your boy Damien is going to betray Athur and kill him one day, you might want to take that into account. BTdubs, your name is Emrys, sorry about your luck.” So Merlin is caught between protecting Arthur like he’s supposed to, or letting a little boy get murdered.  He almost goes with the latter, until the kid guilts him into helping through telepathy, and Arthur rides off to take his future murderer back to his people.

If I had written this episode, I would have changed: Literally everything I bitch about through the rest of this installment of Merlin Club. Everything. I hate this episode and the fact that so much of the rest of the series’ storyline is involved with it.

The thing I loved most about this episode: The subtle looks from both Gwen and Mordred. I think Gwen very early on realizes that Merlin and Morgana are magic, and there’s a scene where she notes Morgana’s behavior is strange, after she sees evidence of the boy communicating telepathically with Morgana, but Gwen herself can’t hear it. She makes a little frown, and that communicates so clearly that she understands what’s going on. This isn’t the first time we’ll see that in the series.

Mordred, the Omen kid, also has a great expressive moment, when Merlin lies about having trouble getting out of the castle to help Arthur with the rescue. Mordred gives Merlin a cross look, one that, until doing back-to-back rewatches, I didn’t connect to Mordred’s distrust of Merlin later in the series.

The thing I hated most about this episode: If you’re a fucking druid, don’t go to fucking Camelot. This isn’t hard to grasp.

Also, why the fuck is there always so much fruit on the table when Uther is eating? Does he really consume that much fruit? Does it go immediately from the king’s table to the people who hurl it at Merlin in the stocks? Why is this kingdom so wasteful?

Something I never noticed before: When Anthony Head says, “druid” he sounds exactly like Stewie from Family Guy.

Favorite Costume: I hate the color of this dress/coat thing, but I love the sleeves. 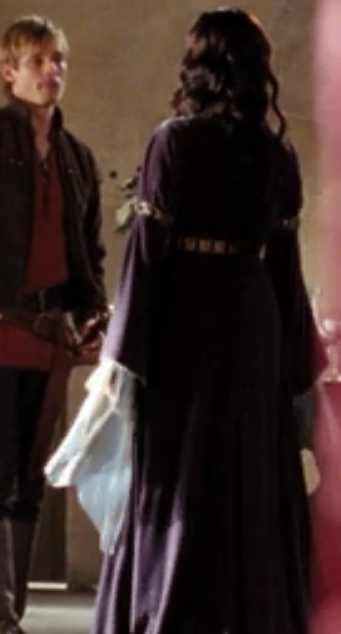 Here is proof of some random headcanon I created: So, remember what I said about Morgana being Uther’s daughter thing being retconned and never really planned in from the start? 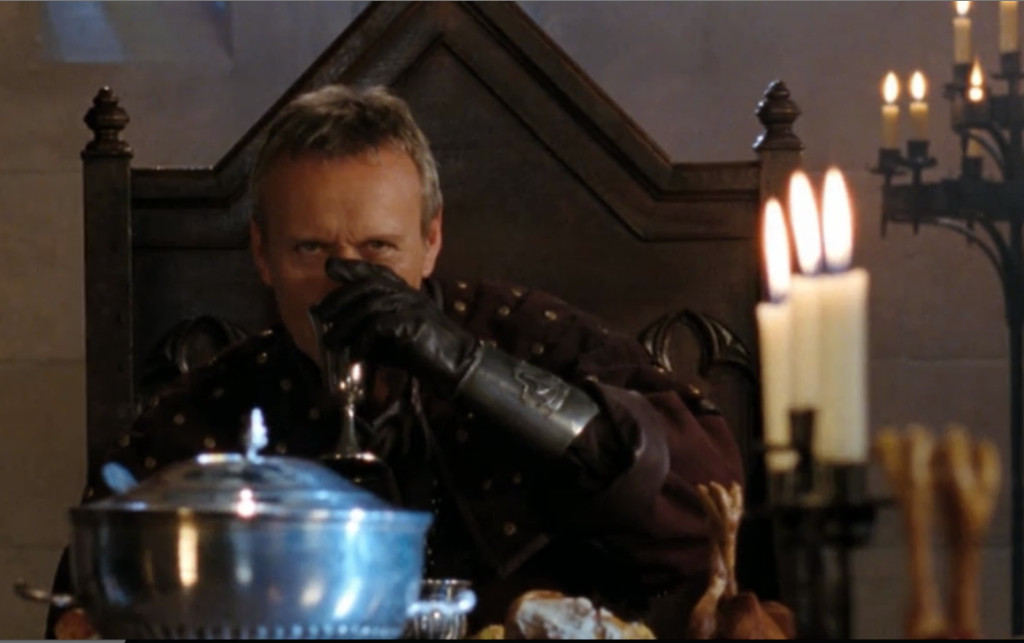 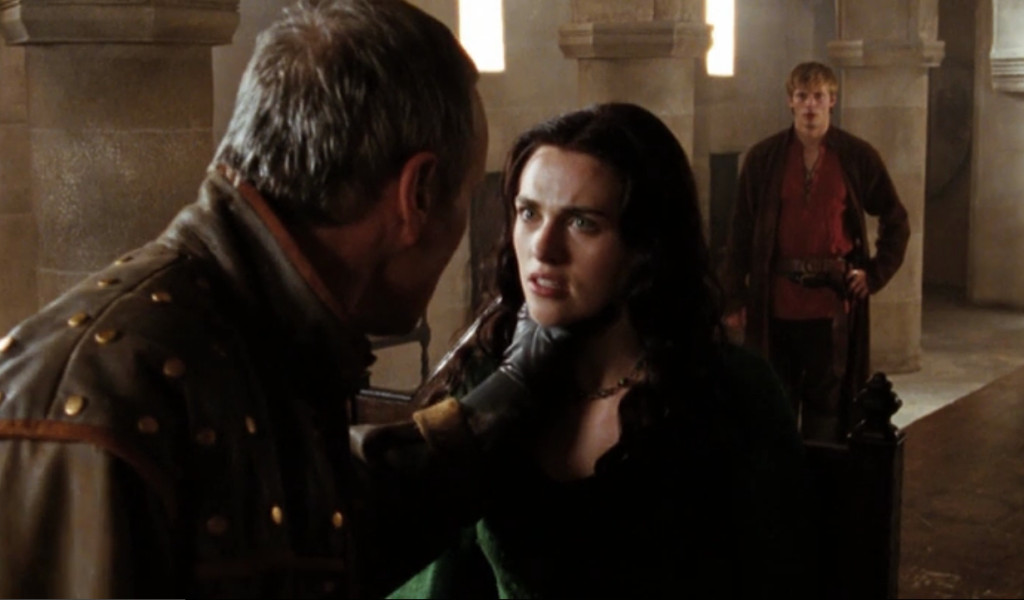 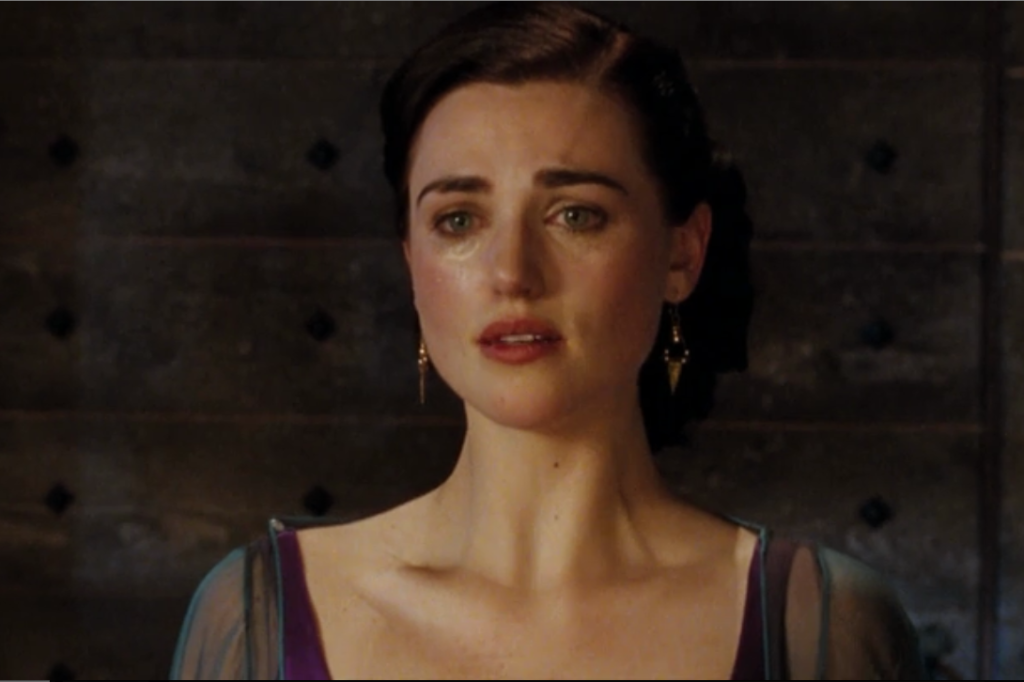 Now, again I don’t “ship” this, but I find it really disturbing that this guy is making fuck me eyes at his daughter, then later chokes her, and later threatens to kill her– saying he’ll break the promise he made to her father– after she fearfully apologizes to him in a last desperate bid to save Mordred.

There are so many ways Morgana’s storyline goes off the rails. But this is such a huge one. If we’re meant to believe that Uther really is a big enough monster to send incesty vibes at a girl he knows is his daughter, if he’s willing to threaten to kill her, if he’s physically assaulting her, then we have to accept that every time Merlin or Arthur saves Uther’s life after the truth about Morgana’s parentage comes out, they’re choosing to defend and protect a man who is not only abusive, but a shitty father. And we’re supposed to root for them.

Now, if the writers had given this as a reason for Morgana’s ultimate hatred for Uther, that would be one thing. Instead, it’s like, here’s your dad being creepy and inviting you for dinner and low-cut dress groveling, but we’re going to pretend that never happened and your only motivation now is that your sister died.

Basically, no one ever calls Uther out for being a pervert and abusive fuck.

What object would Bronwyn steal from this episode? Mordred’s tattoo. She was just saying, in fact, that she needs to get another tattoo, but she didn’t know what. This is it. This is what you’re getting.

What Merthur moment did Jess have the naughtiest thoughts about? I don’t think they were naughty this time. I think she was all romantic and heart-melty over Arthur and Merlin working together to save the boy, especially when Arthur is like, hey, don’t get caught or you’ll die.