Merlin Club S01E10 “The Moment of Truth” or “That one where Merlin has changed, man.”

So, here’s a quick rundown of episode ten: These guys who don’t really understand how the feudal system works attack the village where Merlin’s mother and Gendry from Game of Thrones live.  They demand all the grain or whatever these peasants are growing, and when the villagers try to hold some in reserve for their survival, the raiders are like, “yeah, no, that’s not going to work,” and the raider dude slaps Merlin’s mom. She goes to Camelot for help, but Uther won’t help because the village is in a different kingdom, and despite Uther’s stunning personality, the king there doesn’t care for him. In order to help the village and avert war, Arthur, Merlin, Morgana, and Gwen go there. While Arthur assembles a dubious army, Gendry wants to know why Merlin won’t just magic the problem away. But Merlin can’t, because he doesn’t want his new friends to know that he’s a sorcerer. In the end, Merlin does use magic, Gendry dies, and Arthur thinks Gendry was the sorcerer. And he’s not pleased that Merlin didn’t tell him, which confirms Merlin’s fear that Arthur would not be as chill with him if he knew the truth.

The thing I loved most about this episode: I love the way they treated the thing between Merlin and Arthur re: magic. The fact that Merlin was tempted to tell Arthur, and then realized he couldn’t. It makes me think of all the little prejudices people advertise as though they were totally okay things to say, and how much they break people’s trust without ever even knowing.  This has come up a lot in discussions about rape, and how casual comments can prevent a loved one from sharing their experiences. For better or for worse, magic is clearly an allegory for prejudices people experience, and this is a very clear example of stuff that actually happens when our careless words ultimately silence people.

The thing I hated most about this episode: I’m not a fan of Merlin’s mom. In this episode, we learn that Merlin’s village isn’t even in Camelot. So, his mom sent him out of a kingdom that, I guess doesn’t have a problem with magic, based on what we learn in future episodes. So, why? Why would she send her son off somewhere deathy? And at the end, when he was going to stay with her, she’s like, “You have to go back” or some shit. Back where? To the place where he’ll almost certainly die?

I also hate the plot– which is common to medieval-esque fantasy– where some random raider guys or power mad lord is like, “Give me all the grain and shit! I don’t care if you need it for planting or survival!” Well, this is the fucking feudal system, right? So just off the top of my head, if you like raiding a particular village, you can get more mileage out of said village if the villagers all live, right? Don’t steal EVERYTHING they have, especially once you see that their king doesn’t give a shit about protecting them. Charge them “protection” money. Take a percentage of their harvest, fuck up any rival raiders, start a mob. This isn’t hard to figure out. They had a mob in the actual middle ages, because it was a good scam.

Something I never noticed before: That that dude was Gendry.

Favorite Costume: Morgana and Gwen in their warrior outfits. Hands down: 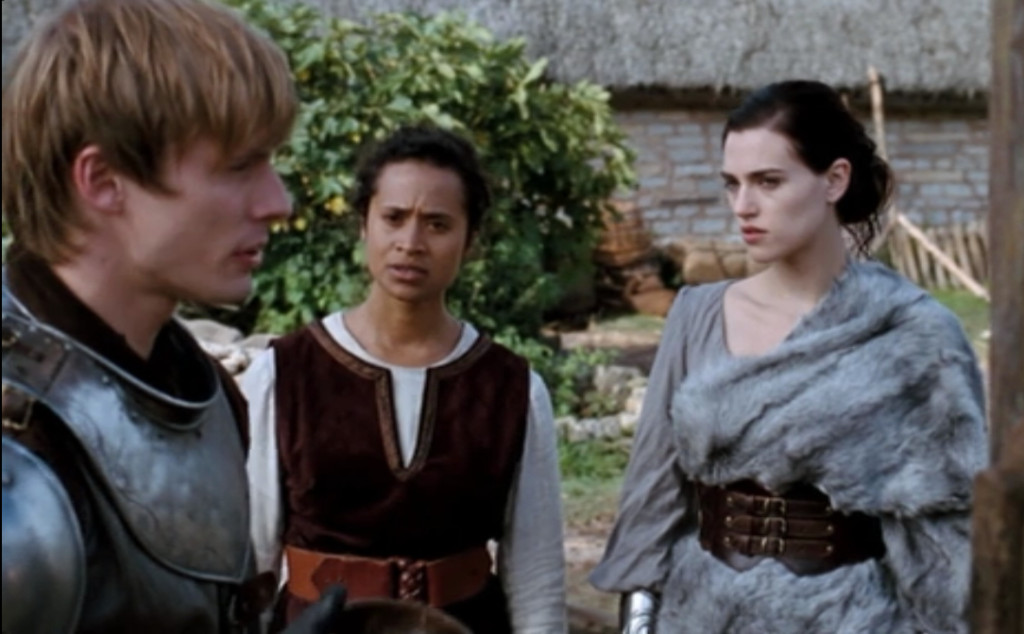 Merlin’s mom: “They shouldn’t be here. Especially the Lady Morgana. Isn’t she the king’s ward?”

Merlin: “Not that you’d know it. She’s the only person I know who isn’t frightened of him.”

What object would Bronwyn steal from this episode? Morgana and Gwen’s warrior outfits.

What Merthur moment did Jess have the naughtiest thoughts about? There are so many, but I think her favorite one would be when Merlin’s mom totally ships her son and Arthur. Totally ships it.

That’s it for this week. Join us on Monday as we watch S01E11, “The Labyrinth of Gedref” at 8pm EST on the hashtag #MerlinClub.