So, here’s a quick rundown of episode one: Uther’s newfound passion for grave robbing unearths the  remains of Cornelius Sigan, an ancient and powerful sorcerer who was buried with a fucking enormous amount of treasure and who jammed his soul into a big blue diamond. This attracts the attention of the local robbers, one of whom (Cedric) weasels his way into Arthur’s employ, ultimately replacing Merlin and gaining access to Arthur’s comically oversized key ring. Cedric sneaks into the tomb and steals Sigan’s horcrux, and accidentally gets possessed by the long dead sorcerer. The gargoyles in Camelot come to life and do the exact opposite of what gargoyles are meant to do, and Arthur is nearly killed before Merlin resorts to magic to kill the sorcerer.

If I had written this episode, I would have changed: I would have played down how supposedly powerful Sigan was. There was a lot of, “he was the most powerful sorcerer, he could do this, he could do that,” type stuff, but then Gaius said Sigan was going to be executed, so he put his soul or whatever into this diamond. Okay. But why didn’t he just use his great and terrible power to… not get executed?

The thing I loved most about this episode: When Merlin has to come groveling back to the dragon for help, and the dragon is like, you have to promise me something:

Kilgarrah: “A promise that one day, you will free me.”

Merlin: “If I release you, what will you do?”

Kilgarrah: “That is not your concern.”

He’s basically saying, “Uh, I’m a dragon. I’m going to immediately start fucking shit up the second I get out of here. But don’t worry about that right now.”

The thing I hated most about this episode: All of Camelot believes that Cedric is the evil sorcerer all along, right? But Merlin knows he wasn’t. He knows how the horcrux worked. Yet when he dies, there’s not even a moment or a line where Merlin is like, “hey, Cedric wasn’t a nice dude, but it’s awful that he died because he got possessed by an evil dick magician.”

Something I never noticed before: The dress that Gwen starts wearing in this episode (the one I picked for my favorite costume) is the dress her father gave her before he died at the end of season one.

Favorite Costume: This dress. It might be my favorite of all the dresses on this show:

It’s also an example of what Jess calls the “downward trend” in Gwen’s necklines.

Here is proof of some random headcanon I created: None in this episode. In fact, I think the incest vibe chills out considerably in season two, now that Morgana is just there to wake up terrified in every episode.

What object would Bronwyn steal from this episode? I can see these grim as hell arrow-shooting birds flanking Bronwyn’s front walk, especially because they could be ravens and she’s into Game of Thrones now and especially because she hates her neighbors. 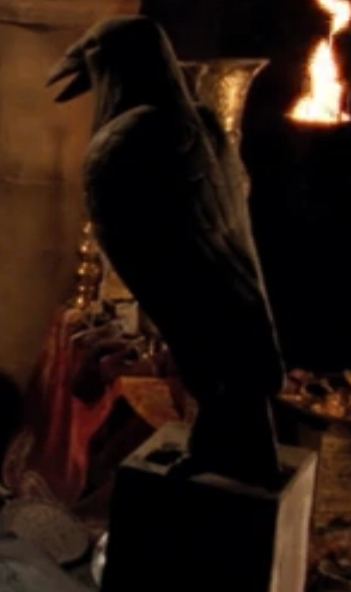 What Merthur moment did Jess have the naughtiest thoughts about? Did you notice how at the beginning of the episode, when Arthur wakes up in the night, he yells for Merlin and Merlin is like, right there.

That’s it for this week. Join us on Monday as we watch S02E02, “The Once and Future Queen” at 8pm EST on the hashtag #MerlinClub.