I’ve never agreed with the general attitude among writers and reviewers that STGRB is a “troll” site and should be ignored because any amount of attention is “giving them what they want.” It’s one thing to apply this strategy to a toddler throwing a tantrum, but we’re talking about grown people who have done actual, dangerous things to strangers out of a demented belief that criticism of authors and their (obviously flawless) books is some kind of crime.

It may seem like two posts in two days about the same group of spectacular morons is overkill, but last night, after STGRB made yet another post about me and how childish, jealous, and unsuccessful I am, a tweep named Shelby contacted me to tip me off about a little discussion going on in the comments section of this STGRB post. You see, Shelby had blogged about some personal issues she was having with a custody dispute in her divorce, and STGRB were all over that.

Here’s Obvs hinting that Shelby abuses her kids, and our old pal Johnny B Good saying it’s perfectly okay to say this kind of shit at their “anti-bullying” site:

If you’re about to pull the trigger on that one-star review, you better restrain yourself, but if you wanna talk shit about a stranger’s custody dispute? Sure, go for it. 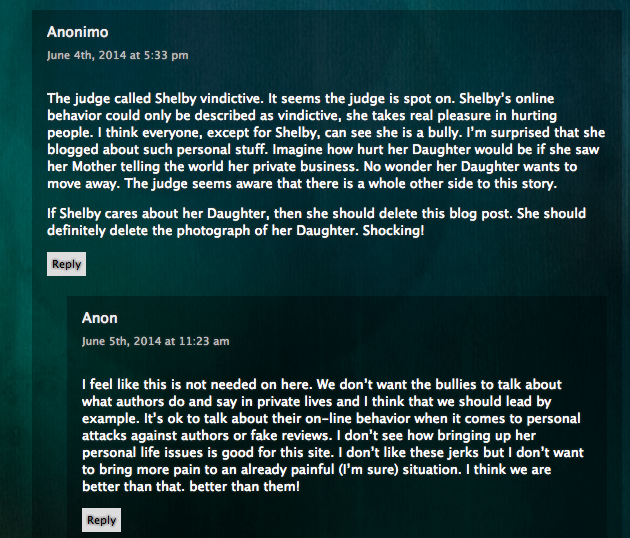 So, while Aninomo masturbates furiously to their fantasies about someone else’s child’s life being ruined, a wild anon appears! It is… super not effective.

They would never plaster stuff about Shelby on their site, but they’re not going to remove the comment with the link or any of the discussion to follow, either. I mean, Shelby made all of that public, right? It’s no longer private. This happens all the time. For example, say someone writes a book. And they just put it out there. And like, anybody can comment on it. It’s the same, right? Or does that only work when the the thing you’re putting in public is your metaphorical baby, and not an actual, living child?

And you don’t bring up details of “bullies'” personal lives because you’re hoping to help the victims of non-existent bullying that never happened heal their wounded, self-important feelings. You bring it up to gloat and celebrate about how superior you believe you are. And then after all two or three of you are finished stroking each other and your sock puppet accounts off in the abstract, you can lay in bed and touch your naughty bits while you imagine that your pathetic failure of a life is somehow more valid than an internet strangers’. Because that’s the only thing that can get you off anymore.

That, and sand paper gloves with hand sanitizer lube. It’s why you’re so fucking cheerful.

I love the length Anon is going to in order to try and get their point across: “Yeah, so, don’t get me wrong, I’m a piece of shit and totally agree that we should be gossiping about this person’s personal struggles, but I’m just not as big a piece of shit as you because I think we should do it in private. I’m just saying.” But don’t worry, “Some Guy” will help Johnny B Good and Anonimo justify mocking a stranger’s custody case on their “anti-bullying” website: 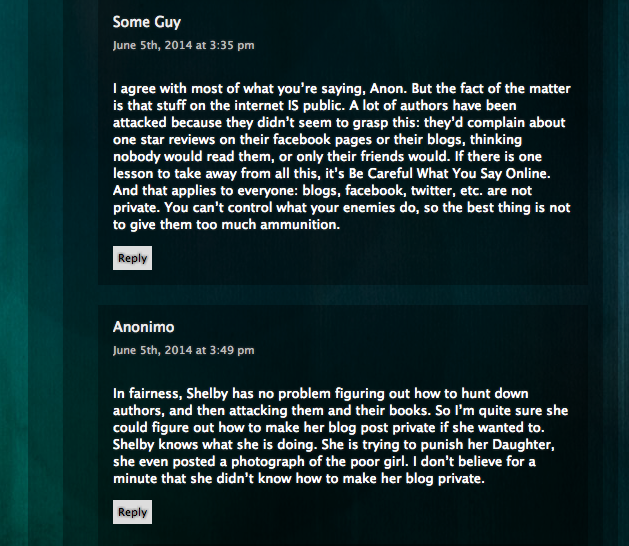 Yeah, be careful what you say online, guys. Because this site, dedicated to eradicating internet bullying, will use it against you. They will even refer to themselves as enemies and your personal information as ammunition. Just to go the extra mile, Anonimo will supply amotive to your actions, free of charge. Anon tries again:

But logic has no place in the kingdom of hypocrisy: 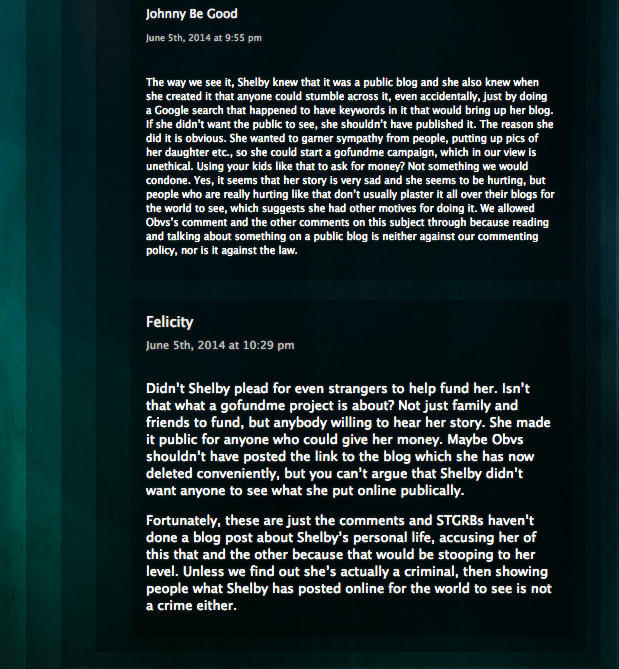 Yeah, I don’t think you get credit for just leaving this bullshit in the comments and saying that someone is asking to have you talk shit about her because she once had a GoodReads account and did things with it that you didn’t like.

Yeah, they watch the site like hawks. What kind of bird seeks out content totally unrelated to the issue they’re purporting to care about, in order to attack people? Is that the Worthless Turd Warbler? I think it might be!

But I agree, Time to Grow Up. I don’t care what a person’s been through. It gives them no right to tread others like shit, whether online or in person. Like, if they get a really mean review on their book, they totally don’t have the right to drag another person’s personal life into their little gossip circle. It’s unacceptable. 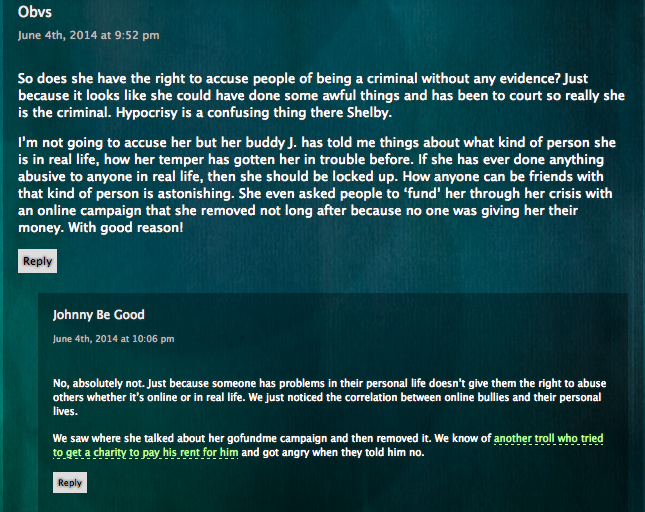 Nobody has the right to accuse anybody of a crime without evidence. See also: stalking. It’s not like STGRB commenters have accused anyone of that, lately. 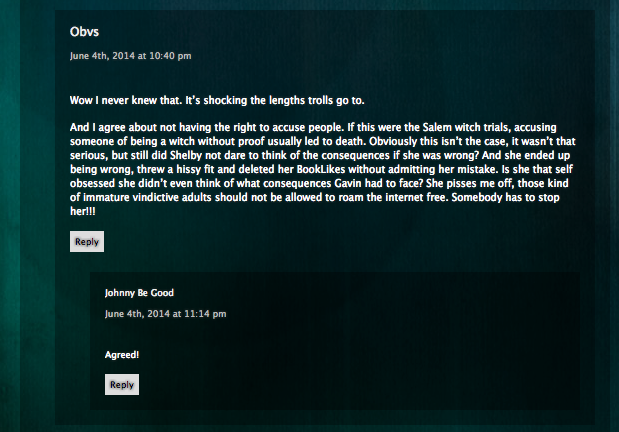 I agree. Immature, vindictive adults that roam the internet freely should stop. So, follow that advice, Melissa Douthit, owner, operator, and probably 60% of all the commenters at STGRB, because you’re making yourself look laughably stupid.

PS. Thanks for making a second post about me. I said “jump, bitch!” and you were like, “How high, Domina?” I never realized I was a switch until this moment.