Last June, a funny thing happened to me. In the same way that some people “find” Jesus, I “found” Billy Joel.

I should just clue you in right now, you’re going to think this is a parody article. It is totally not. I’m fully aware of how ridiculous it sounds to say that you’ve had a spiritual awakening from listening to too much Billy Joel. And I do, admittedly, make a lot of jokes about the near creepy  agápe I feel toward him via ye olde social media. This is going to be the uncomfortable part of knowing me where you realize, “Oh. So, when she tweeted that she wanted a lock of her hair delivered to Billy Joel upon her death, she… wasn’t kidding.”

I guess what I’m saying is… brace yourselves. This is going to be the blog post where some of you fall away, overwhelmed by my weirdness. I understand, and it’s been nice knowing you.

Now, I’ve always been aware of Billy Joel. He was just out there, floating around with all his catchy hit songs. I had a copy of The Stranger on CD, and every now and then I’d pull it out to listen to “Everybody Has A Dream.” I liked him, but I wasn’t a hardcore fan.

So there I am, in the first week of June, and I’m on a road trip with my husband. Our car’s satellite radio was working, because it was a free preview week, and I found to my delight that channel four had been transformed from 1940’s music to a Billy Joel channel. So, high as a kite, riding in the passenger seat, I start texting Bronwyn Green (Bronwyn’s texts are next to the picture of me and Bronwyn and American Girl Samantha on the beach. My texts are next to the picture of American Girl Samantha holding my shoes on that same day at the beach. Oh, what a merry day that was, friends): 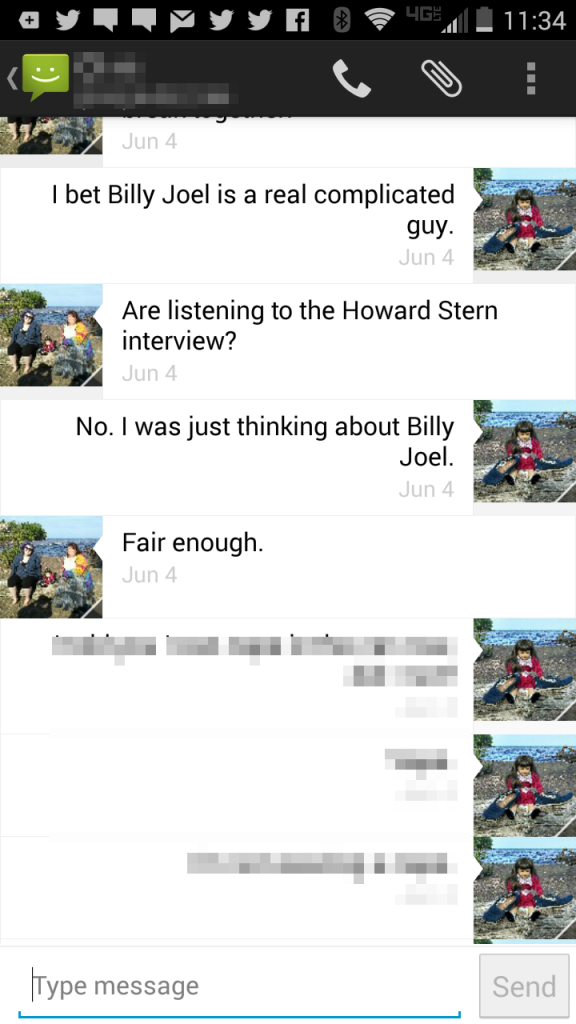 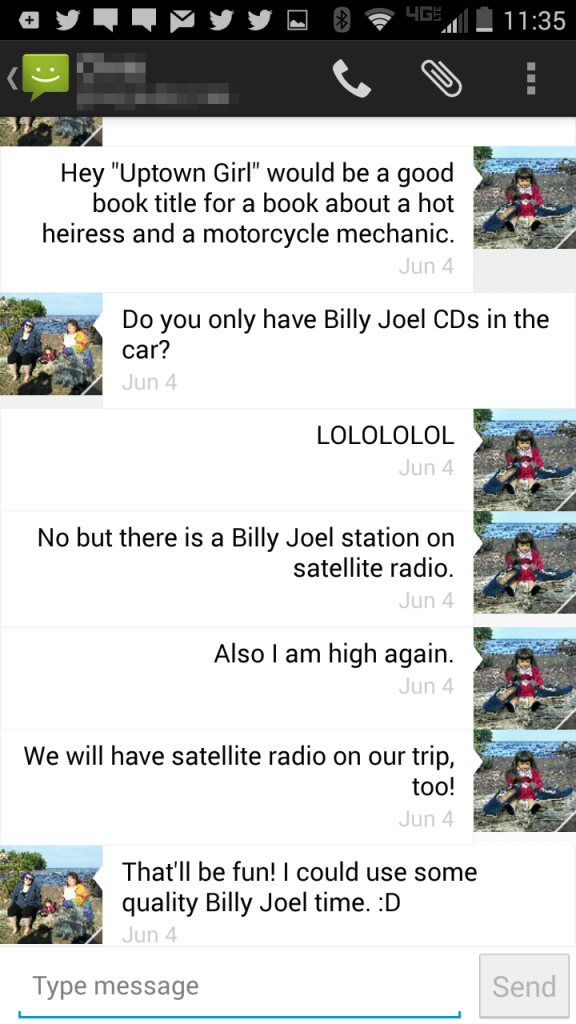 I don’t know what happened that day, or why I became this immediate and passionate Billy Joel fan. Car trip boredom? I like to believe that it was some kind of cosmic intervention. 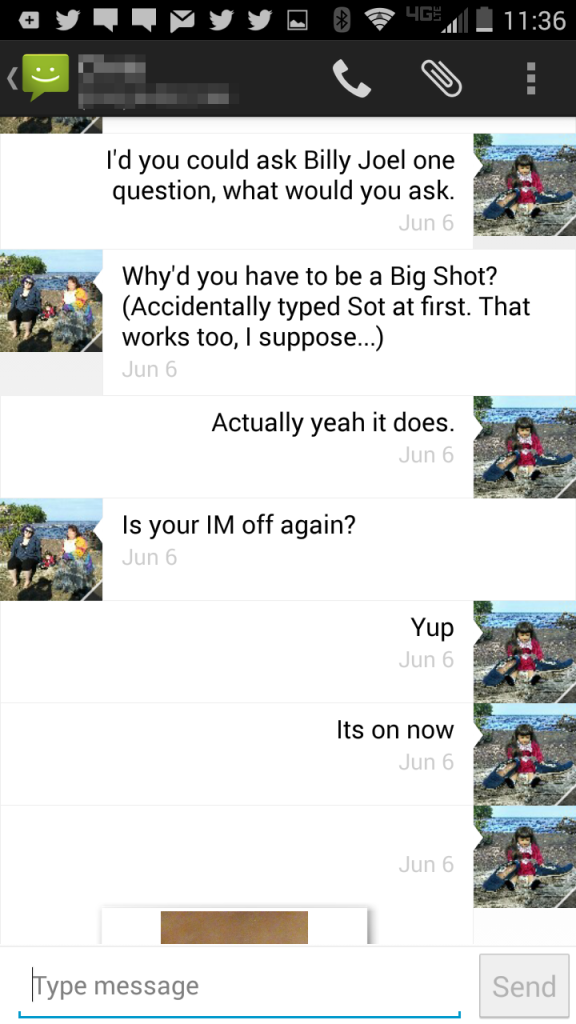 As the days went on, I kept randomly texting Bronwyn about Billy Joel: 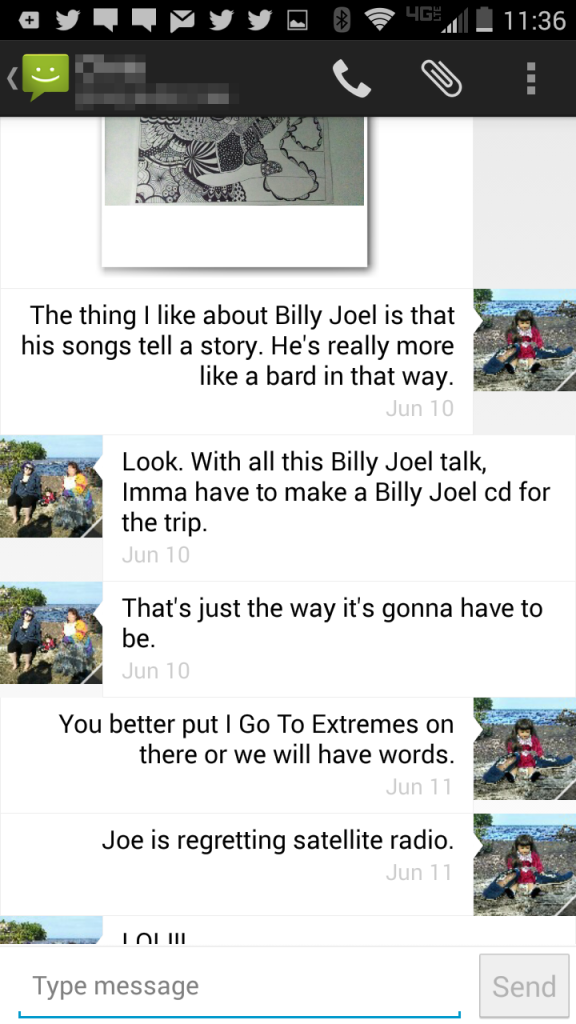 The trip we’re referring to is our annual vacation, in which me and Bronwyn and a bunch of other awesome writers go up north and share a cabin together. When we got there, I noticed two very distressing things. I had forgotten to download my running playlist to my phone, and there was no internet. So if I went for a run, all I had to listen to was the sound of the mosquitos and the black flies attacking me. Luckily, Kris Norris had some Billy Joel MP3s, and she shared them. I thought it would be really difficult to run to Billy Joel, especially since at the time I was running to mostly super aggressive rap mixed with songs from Frozen. But I didn’t have a choice, so off I went.

As I ran, “The Entertainer” came on. And without any distractions, I was able to really, really listen to the lyrics. And when he got to the part where he says:

I got hit with such a shock of realization, I stumbled over my own feet. Billy Joel, the guy who hadn’t put out an album of new material since 1993 and still packed stadiums around the world twenty years later, had once thought everyone could just forget about him. The line spoke to me on such a deep level. I imagined Billy Joel’s fear, that he would fade into obscurity, that he couldn’t keep up, and I identified. Not with those particular fears, but with the idea of fear driving you on and on, exhausted, as you work harder than you should have to in order to be happy. 1974 Billy Joel couldn’t have known how his career was going to play out. He had no idea that he’d be in residence at Madison Square Garden forty years after that song came out. Just like none of us have any idea if our worst fears will have manifested in forty years. We have to choose to live with either hope, or fear, I thought.

I took a picture of the moment to commemorate it. 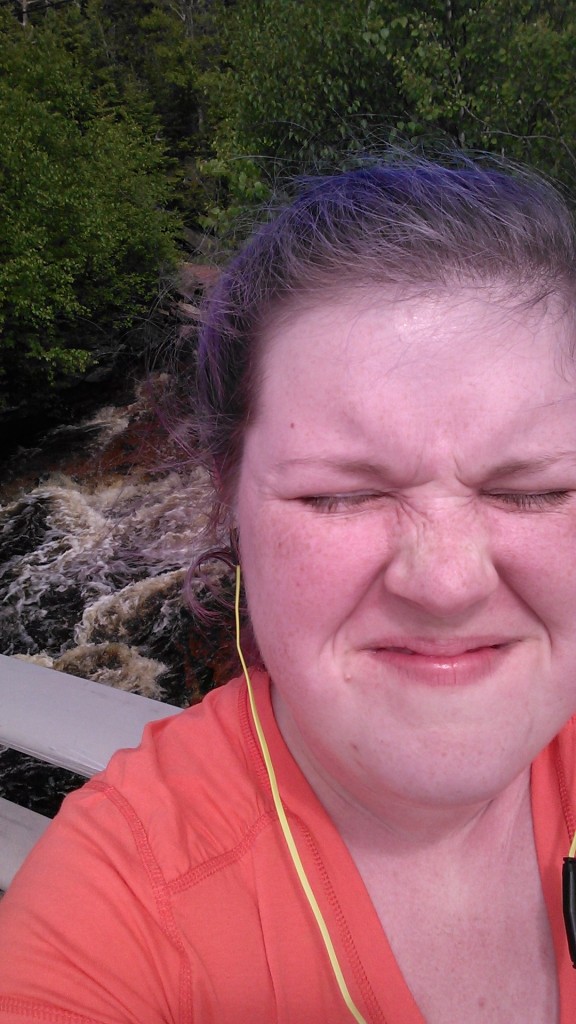 The fact that I was standing in front of a waterfall when I came to this life changing realization was an awesome coincidence. The fact that I had sweat and gnats in my eyes was not. Billy Joel giveth, and Billy Joel taketh away.

After that day, seeds began to grow in my brain. I became obsessed with Billy Joel, to the point that I was rarely listening to any other artist. And for Bronwyn, the texts continued to roll in. Remember, all of these are completely without context when they’re sent. One moment, she’s sitting on her couch, probably knitting something, and bam, her phone makes this elevator noise and something like this pops up: 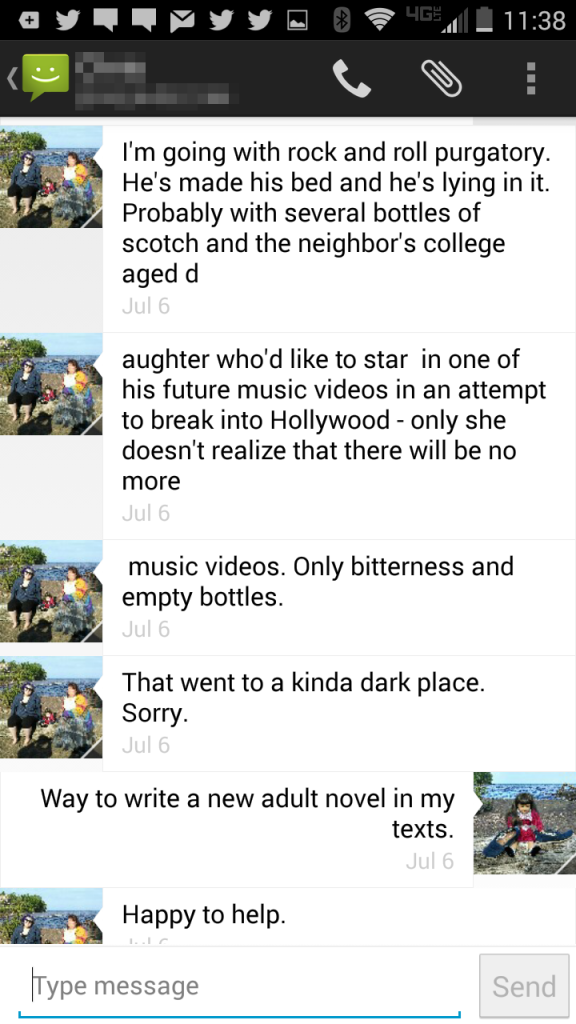 So, I’m assuming that at this point, based on her blasphemous responses about the man who was rapidly becoming my lord and savior, she’s getting tired of my Billy Joel nonsense. But it was too late. I was already obsessed.

Notice how “I’m thinking about Captain Jack Harkness” becomes “Let me preach to you the gospel of Billy Joel” just a day later? That’s because once I’ve drawn you in, I refuse to let you go. 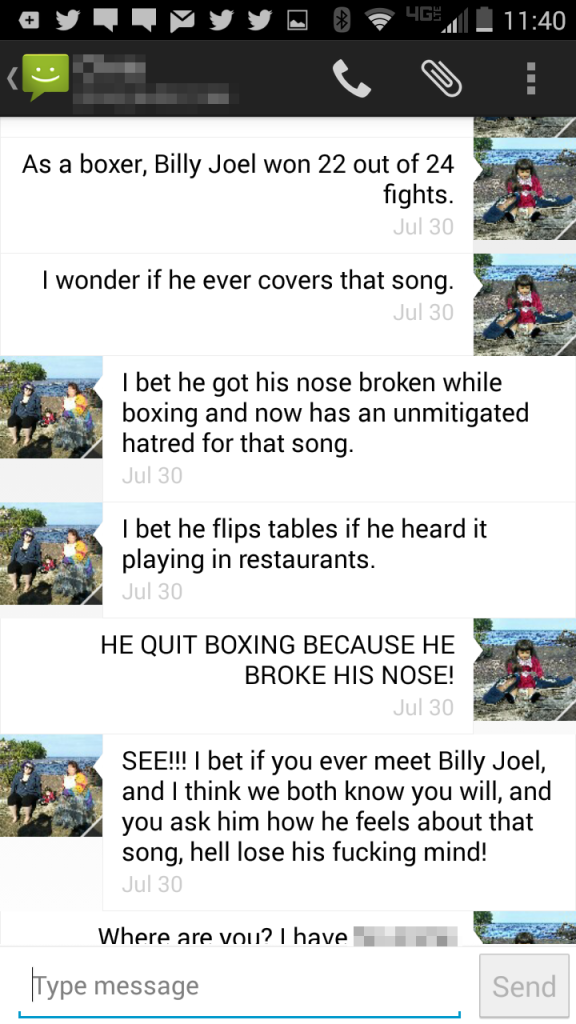 Bronwyn’s unerring faith that I will someday meeting Billy Joel fills me with a lot of hope on days when I’m really depressed. I’ve actually started dressing to leave the house only in clothes I would be okay with wearing in a picture when I inevitably meet Billy Joel. Just like how people dress up to go to church, or in preparation for the Rapture. 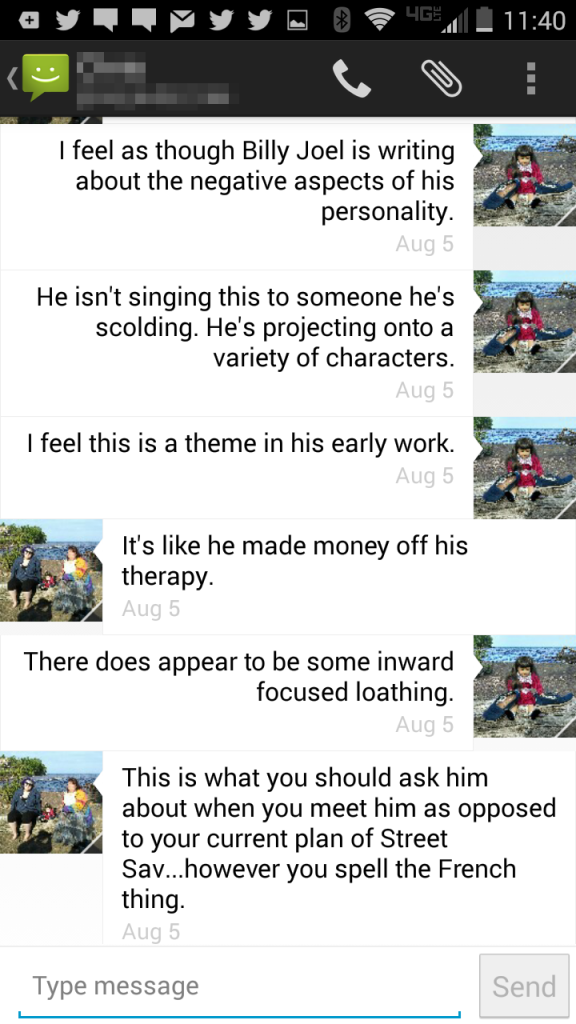 Here she is referring to my plan of asking Billy Joel if he thinks I have street savoir-faire, a reference to the song he sang in Disney’s Oliver & Company. I’m almost afraid to ask that question, because I know I am unworthy and the answer is likely “No. How did you get my home number?”

The thing is, even though I’m being kind of funny about this, Billy Joel  helped me through a really hard summer. His music is the closest thing to God that I’ve had in a long time. His songs are my mental health pick-me-ups. His lyrics show me truths about my life and my self, and from them I learn how to be a better person.

If that isn’t the definition of religion, I don’t know what is.