DON’T DO THIS EVER (An advice column for writers): “Just Say Hale No To The Taliban” edition

What. The fuck. Is happening?

If you didn’t get a chance to read the last installment of DON’T DO THIS EVER, then you should hop on over there , because otherwise you will be muy confuso.

In the wake of Kathleen Hale’s stalking of blogger Blythe Harris, book bloggers developed a plan to stick up for their rights. They rallied support for a “blogger blackout.” The concept is simple: for a week, these bloggers don’t review. Some bloggers have taken it further, making it their new policy to not review any recent releases for the foreseeable future. This is to make a point not only to badly behaving authors like Kathleen Hale, but to publishers, who rely on book bloggers as a source of free publicity. The message they’re sending, loud and clear, is that without them, it’s pretty damn hard to grow a readership these days.

But one author, Deborah Smith, sees the blackout differently. She thinks it’s… sing it with me now, because you know this tune…

It appears to have started on October 20th, with this tweet:

So, now that we’re aware that we’re dealing with an author who thinks irony is “people doing something I don’t understand in a way that I feel personally affects me,” the rest of these tweets will make more sense in context.

Ole Debbie here does not care. In fact, she doesn’t care so much on October 22, that she continues to tweet about it:

Apparently, bloggers taking a single week off from reviewing and declaring that they won’t buy books or receive ARCs from authors who support Kathleen Hale in the wake of her admission of stalking, is an attempt to punish authors. Smith’s reasoning seems to be that because bloggers receive ARCs from publishers, authors should be allowed to stalk them.

Wait a minute. Hang on. Kathleen Hale didn’t “respond to reviews.” She spent months stalking a blogger online, plotting to get her address, and methodically planning a confrontation at the blogger’s home. This wasn’t some spur of the moment bad decision making. Hale rented a car months in advance, and drove to Harris’s house to call her out in person. That’s why bloggers are scared and protesting.

Furthermore, there’s no law that says an author can’t respond to a review. Respond all you want. But people are free to react to that response, and if everyone thinks you’re a dipshit, well. You don’t really have a say in that. Here, Smith has turned the car around. We’re not going to ProtectHalesville today. We’re heading right on back to bad reviews are bullying country.

So, here we are on that lonely, delusional road so many authors drive us down. Smith appears to truly believe that she and other authors are entitled to the free publicity that those ARCs, giveaways, and interviews provide for them, without having to maintain a standard of behavior up to and including “don’t stalk people.” For a blogger to deny an author a platform to market themselves is nothing short of, well… terrorism? 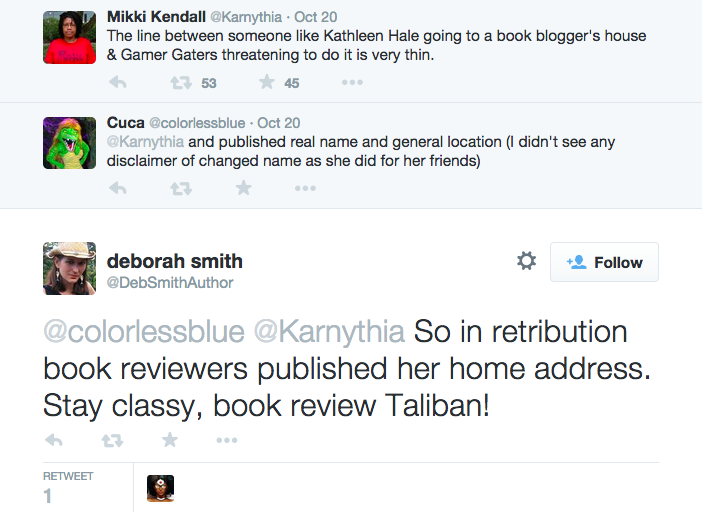 Here, Smith is referring to the doxxing of Kathleen Hale by twitter user @WhatTheEff. When bloggers on the #HaleNo tag saw this going down, they rejoiced and patted each other on the back for being hypocrites and bullies.

Oh. No, that’s not what happened at all: 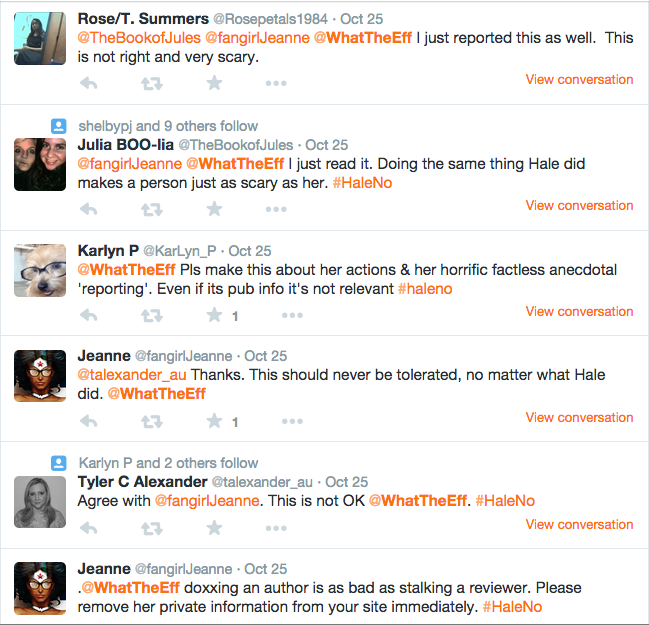 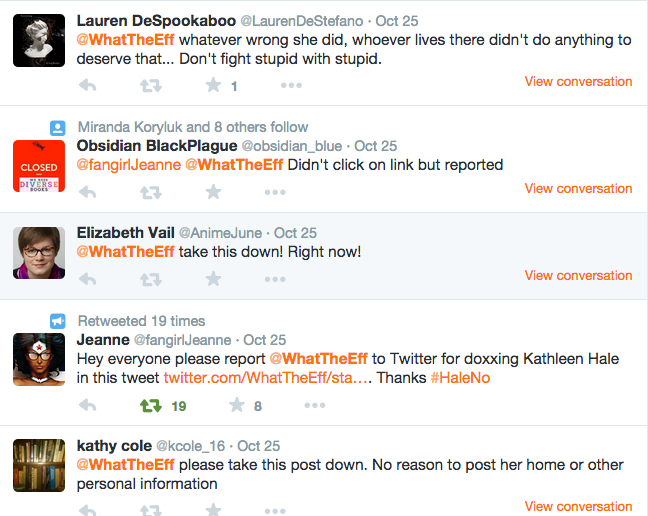 In fact, a lot of people reported @WhatTheEff. I know I reported them. But Smith, seeking to cement her place as the Ann Coulter of the romance world, won’t let the Taliban thing go:

And if her hysterics over bloggers taking a week off from reviewing–remember, that’s what she’s pissed about, that bloggers won’t review books for one week and some are choosing to boycott authors who support an author who stalked someone over a GoodReads status update–weren’t offensive enough yet, well, hold on to your hat. Good ole fashioned white supremacy is just the pick-me-up you need to keep your overdramatic twitter rant fresh and exciting:

She’s also got some words for bloggers who aren’t sympathetic enough to ever-flowing white tears: 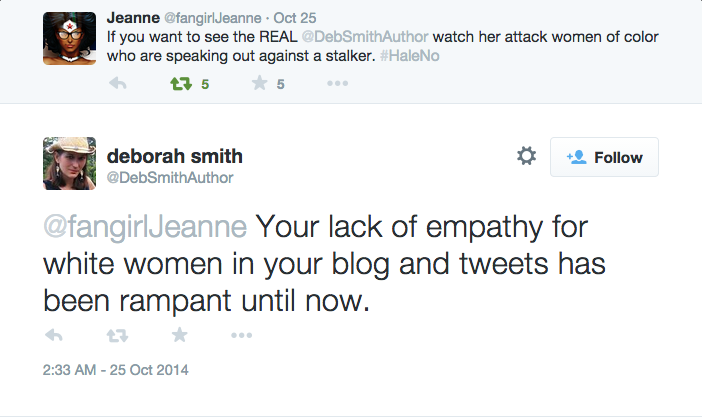 Smith apparently has made something of a name for herself on Twitter based on her Islamaphobic tweets and harassment of women of color. I’m sure you’re all shocked.

Apparently, bloggers are overreacting to a “minor incident” of stalking:

Saying, “I don’t want an angry author nursing an ego boo-boo to roll up to my door intending to do god-knows-what to me in retaliation” is no more bullying than giving a book a bad review in the first place.

There are many, many more tweets that I’ve screencapped from this nonsense, but they all say basically the same thing: Deborah Smith believes that she, as an author (and publisher; she is co-founder of BelleBooks), is entitled to free publicity, great reviews, and unending adulation from the blogging community. And if she doesn’t get all of that, she’s being victimized by terrorists.

I’m just saying, if I were Deborah Smith, I wouldn’t be demanding reviews from bloggers right this minute.

Look, if you want an example of “burning bridges,” this is the one, right here. Authors, when are you going to wise up? Book bloggers are out there, sharing their hobby in a way that benefits you. These are people who are so passionate about reading that they want to share their experiences with other readers and get them excited over your books. It’s done without pay (regardless of what Smith seems to believe, ARCs don’t pay the bills), it’s a ton of work, and it all encourages readers to buy books. Book bloggers are in it for love, not to destroy authors. In fact, most cases of damage done to careers has come from the authors themselves, when they point out a negative review and respond to it by childishly stamping their feet in public. That’s not the blogger’s fault. That’s the author’s fault. And even then, there don’t seem to be any consequences for the authors who actually do this crap. All we have to do is look at the response to Hale’s admission of stalking to see that no matter how badly an author behaves, there isn’t ever going to be a consequence.

Oh, hey, speaking of badly behaving authors who are still beloved despite the fact that they’re generally terrible: 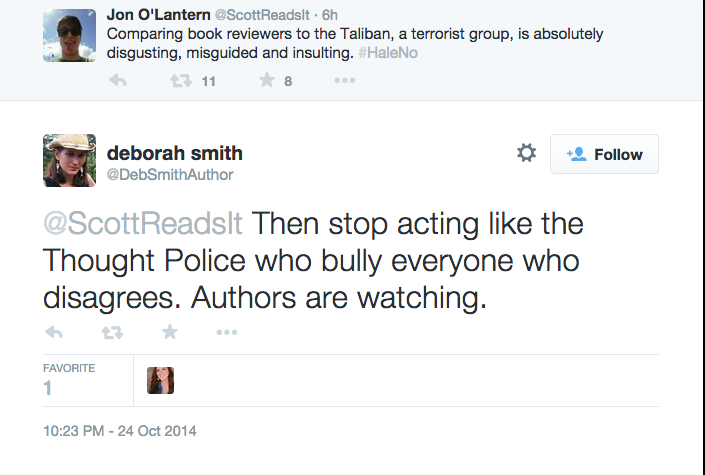 Wow! Someone actually favorited that tweet? The tweet that sounds like a threat, coming from a woman who vocally supports Kathleen Hale, a reviewer stalker? Who the hell would favorite that?

Let’s compare and contrast that user photo, shall we?

Oh, okay, that explains it.

If you’re looking for more information on the blogger blackout (from someone who won’t compare bloggers to the Taliban and make Islamaphobic slurs), here are some posts you can visit:

There’s also a Change.org petition asking Goodreads to increase privacy measures to protect the safety of its users.

Finally, as Deborah Smith is cofounder of BelleBooks, I would strongly urge any writers to avoid submitting their manuscripts there. I personally am writing them off my to-buy lists. It’s not fair to the authors who write for them, but I refuse to put money in the hands of a spoiled, entitled, racist brat like Deborah Smith. I strongly encourage you to consider doing the same.