Merlin Club S04E12-13, “The Sword In The Stone” or “Why isn’t anybody supervising that dragon?”

So, here’s a quick rundown of episode eleven:  It’s the feast of Beltane, because fuck it, we don’t know what religion we’re going with here, and because Arthur didn’t open his eyes about Agravaine, Morgana manages to bust into Camelot and seize the throne. Then Arthur and his men have to go hide in Ealdor or however it’s spelled, where Arthur and Gwen hook back up, and then everybody goes back to Camelot and gets into a fight and wins the throne back. Gwen becomes queen, but Morgana gets that baby dragon, so I think they both walk away with something of value.

If I had written this episode, I would have changed: Tristan and Isolde would not make an appearance. This is the last story of the season. I want that time devoted to Arthur, Merlin, Gwen, Morgana, Gaius, and to a lesser extent, some of the knights. Do not ask me to become emotionally involved in a cliched, two-dimensional love story that robs the episode of time that could have been used to deepen the plot.

The thing I loved most about this episode: I liked the scene between Morgana and Gwen, when Gwen is like, why are you doing this, and Morgana is basically like, nothing personal, but I gotta do this because. It’s not like Morgana wants to kill Gwen, Gwen is just standing in the way of her ambition. That’s another trait like Uther; she’s looking out for number one.

I also loved that whatever spell Merlin did on Arthur made him so chill and introspective.

The thing I hated most about this episode: Morgana is so fucking stupid, and it’s not getting any better. She has learned nothing from the last time she was queen for two minutes. In fact, she’s only gotten worse. Threatening to burn the crops? Of the kingdom that you now rule?  Torturing and starving knights who are technically under your command now because they’ve pledged their loyalty to Camelot? Spending zero time securing your throne because you want to watch Gwain get sweaty fighting dudes at your command? Well… I can’t really argue with that one, but I assure you, you’re not doing great.

I also hate that Arthur jerks Gwen around so much. “Oh, I’m so sad about Gwen. Oh, Gwen, thank god I’ve found you again. Oh, Gwen, I wish you hadn’t read so much into that because I don’t really want to get together with you. Oh, Gwen, MARRY ME! At this point, I’m like, “Gwen. You deserve better.”

Something I never noticed before: The lower town gets destroyed all the time at Camelot. Whenever there’s an emergency, someone runs in and bam, the lower town has been destroyed, your majesty. Why do people keep living there, and why hasn’t someone done something to fix this problem?

Favorite Costume: I bet you all thought I was going to say “Gwen’s coronation dress” but joke’s on you:

Freeze framed like that, there is something interesting happening in the crotchal region. I know it’s probably a mic or something. But it’s interesting.

What object would Bronwyn steal from this episode? Various pieces from this costume: 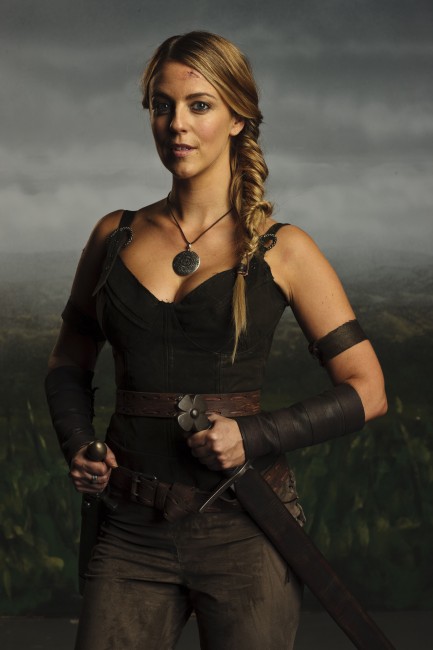 What Merthur moment did Jess have the naughtiest thoughts about? “Whatever you say. I’m in your hands.”