So, here’s a quick rundown of episode Six: Morgana had a dream that some chick is going to drown Arthur, and she’s like, “Damn, I think this could be prophetic.” Then Arthur and Merlin are out hunting and oh snap, the girl and her dad are being brutalized by bandits. Arthur rescues them, and brings them back to Camelot. Morgana recognizes the chick, but literally no one will tell her, not even Gaius who knows Morgana is having prophetic dreams. Turns out, the girl and her dad are messed up with the fae, who are going to trade immortality with them in exchange for Arthur’s soul. In order to accomplish this, the chick ensorcels Arthur so he falls in love with her, and he goes to Uther and is like, “I want to marry her,” and Uther is like, “I bet you do, but I’ll fucking cut her head off before that happens, and her dad’s head, too,” and Arthur is like, “But daddy I love her!” like Ariel in The Little Mermaid, so he runs off and nearly gets his ass drowned before Merlin shows up and literally explodes the girl and her dad. Meanwhile, everyone continues to gaslight Morgana “for her own good” so that instead of knowing that she’s got magic and taking steps to cover it up, she just thinks she’s going crazy. Good job, everybody in Camelot.

If I had written this episode, I would have changed: WHAT THE HELL, GAIUS? Seriously, Morgana goes to him, thinking her only two options are, “I’m crazy” or “I’m magic.” And Gaius decides he’s going to convince her of the former? Now, it would be one thing if Gaius was like, “I better keep this shit under my hat until I know how to dead with it,” but HE TELLS MERLIN. Merlin! The kid he’s trusting to not reveal that’s magic. So what, Merlin is more capable of hiding his magic– spoiler alert, he’s not, or else there wouldn’t be a show– and Morgana is just going to have a banner made or something. Is she going to start entering rooms and being like, “Who has two thumbs and is totally a witch?” Nope. They just try to convince her she’s not magic, even when she’s wrestling with the thought of telling Uther the truth.

Also, I wish Arthur wasn’t under a spell that made him run away with the girl, because it would have still made sense. Arthur was legit falling for her already when she put the spell on him. The whole red-eyed scary magic influenced Arthur was just a weirdly convoluted detail.

The thing I loved most about this episode: This is blatant objectification, and I apologize, but I bit the fuck out of my knuckle watching Morgana walk with purpose in her blue dress.  There was clenching. You’ll see why when you get to the favorite costume section.

And oh my god, Merlin explodes two people! He just EXPLODES THEM. And he has no problem doing this. He doesn’t hesitate, and he seems emotionally healthy after doing it.

The thing I hated most about this episode: THESE ARE OBVIOUSLY MAGIC STICKS, UTHER. WHERE IS YOUR ANTI-SORCERY HARD-ON NOW? 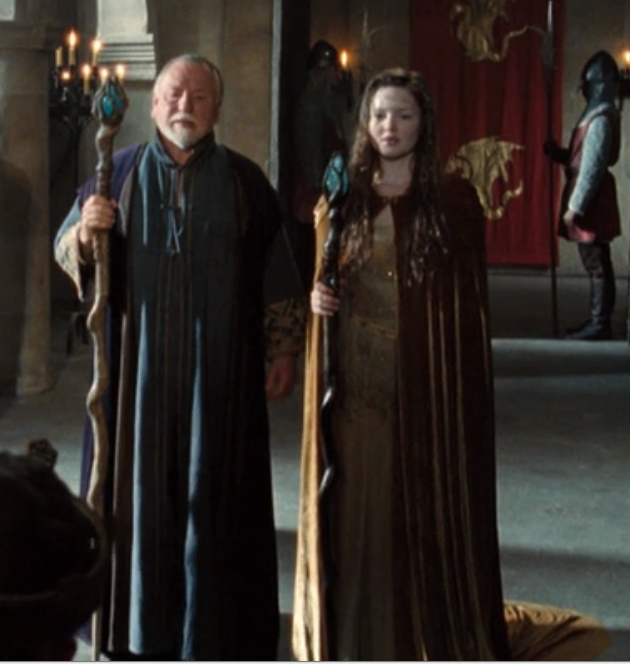 That’s the thing about this show. When it’s good, it’s amazing, but when something is wrong or it doesn’t make sense, everything goes down in flames. Uther sees these obviously magical objects and he doesn’t immediately jump to the sorcery conclusion? He jumps to that conclusion all the time! In almost every episode someone is going to be executed for doing magic. These people have magic staffs in his fucking throne room, but he doesn’t see them? The wheels have fallen off this bitch.

Something I never noticed before: I never realized how often Merlin ends up in the stocks in this episode. In my mind, I stretched that gag out over several episodes.

Favorite Costume: Morgana’s angry dress. I call it that because every time Morgana is angry or distressed, any time she has to walk in a manner that causes any bounce whatsoever, this is the dress she wears: 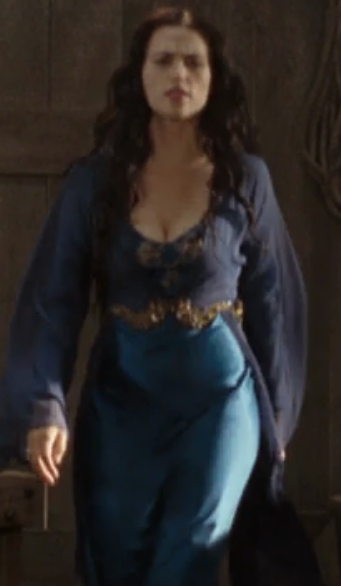 This dress is one of the greatest gifts television has ever given us.

Here is proof of some random headcanon I created: There is yet another conversation about Arthur in which Morgana speaks frankly and even stridently to Uther, and he’s mildly annoyed, but basically just about the fact that she’s worrying needlessly, not because she’s being disrespectful to him. He speaks to her, and she speaks to him, like they’re equals. His own son doesn’t even get to do that.

Now, to clarify, I never thought once in the whole series that they were going to hook up romantically– okay, one time I did, and I’ll point that out when the time comes– but for the most part I thought they were going to have Morgana marry Uther, then he would die and she and Arthur would fight for the crown.

I realize that it’s not what happened in the stories, but Guinevere wasn’t a servant, and Merlin wasn’t a squire. So they play fast and loose with the mythology, anyway.

Besides, this is adorable: 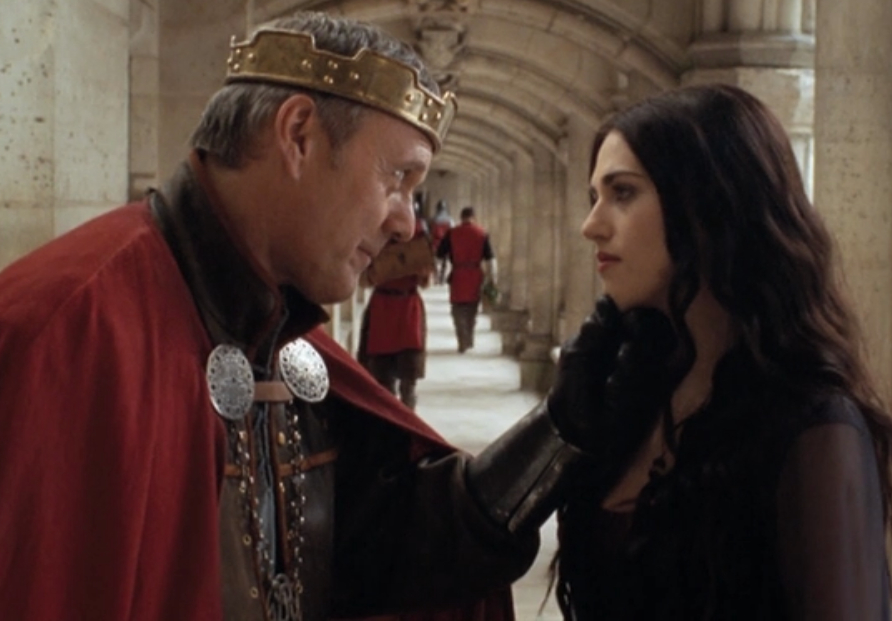 What object would Bronwyn steal from this episode? This mirror: 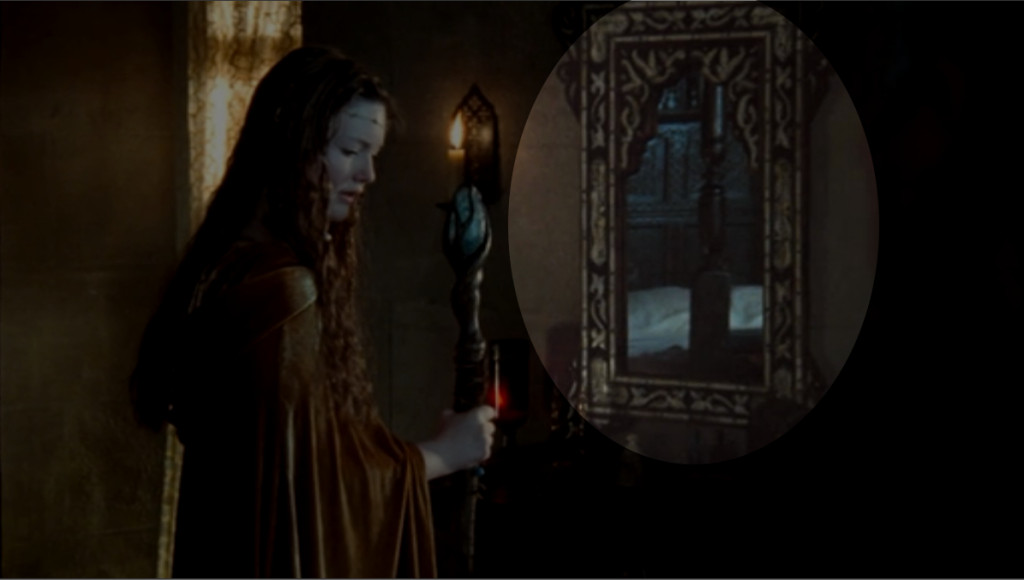 What Merthur moment did Jess have the naughtiest thoughts about? The scene where Merlin and Arthur argue over what room to put the evil girl.